Each applicator full of 5 grams of vaginal gel contains approximately 37.5 mg of metronidazole.

Dose-adjusted comparisons of AUCs demonstrated that, on a mg to mg comparison basis, the absorption of metronidazole, when administered vaginally, was approximately half that of an equivalent oral dosage.

Following single and multiple 5 gram doses of metronidazole vaginal gel to 4 patients with bacterial vaginosis, a mean maximum serum metronidazole concentration of 214 ng/mL on day 1 and 294 ng/mL (range: 228 to 349 ng/mL) on day five were reported. Steady state metronidazole serum concentrations following oral dosages of 400 to 500 mg BID have been reported to range from 6,000 to 20,000 ng/mL.

Culture and sensitivity testing of bacteria are not routinely performed to establish the diagnosis of bacterial vaginosis (see INDICATIONS AND USAGE).

Standard methodology for the susceptibility testing of the potential bacterial vaginosis pathogens, Gardnerella vaginalis, Mobiluncus spp., and Mycoplasma hominis, has not been defined. Nonetheless, metronidazole is an antimicrobial agent active in vitro against most strains of the following organisms that have been reported to be associated with bacterial vaginosis:

Indications and Usage for Metronidazole Gel

NOTE: For purposes of this indication, a clinical diagnosis of bacterial vaginosis is usually defined by the presence of a homogeneous vaginal discharge that (a) has a pH of greater than 4.5, (b) emits a “fishy” amine odor when mixed with a 10% KOH solution, and (c) contains clue cells on microscopic examination. Gram’s stain results consistent with a diagnosis of bacterial vaginosis include (a) markedly reduced or absent Lactobacillus morphology, (b) predominance of Gardnerella morphotype, and (c) absent or few white blood cells.

Metronidazole vaginal gel is contraindicated in patients with a prior history of hypersensitivity to metronidazole, parabens, other ingredients of the formulation, or other nitroimidazole derivatives.

Convulsive seizures and peripheral neuropathy, the latter characterized mainly by numbness or paresthesia of an extremity, have been reported in patients treated with oral or intravenous metronidazole. The appearance of abnormal neurologic signs demands the prompt discontinuation of metronidazole vaginal gel therapy. Metronidazole vaginal gel should be administered with caution to patients with central nervous system diseases.

Patients with severe hepatic disease metabolize metronidazole slowly. This results in the accumulation of metronidazole and its metabolites in the plasma. Accordingly, for such patients, metronidazole vaginal gel should be administered cautiously.

Disulfiram-like reaction to alcohol has been reported with oral metronidazole, thus the possibility of such a reaction occurring while on metronidazole vaginal gel therapy cannot be excluded.

Metronidazole vaginal gel contains ingredients that may cause burning and irritation of the eye. In the event of accidental contact with the eye, rinse the eye with copious amounts of cool tap water.

The patient should be instructed not to engage in vaginal intercourse during treatment with this product.

Oral metronidazole has been reported to potentiate the anticoagulant effect of warfarin and other coumarin anticoagulants, resulting in a prolongation of prothrombin time. This possible drug interaction should be considered when metronidazole vaginal gel is prescribed for patients on this type of anticoagulant therapy.

In patients stabilized on relatively high doses of lithium, short-term oral metronidazole therapy has been associated with elevation of serum lithium levels and, in a few cases, signs of lithium toxicity.

Use of cimetidine with oral metronidazole may prolong the half-life and decrease plasma clearance of metronidazole.

Metronidazole may interfere with certain types of determinations of serum chemistry values, such as aspartate aminotransferase (AST, SGOT), alanine aminotransferase (ALT, SGPT), lactate dehydrogenase (LDH), triglycerides, and glucose hexokinase. Values of zero may be observed. All of the assays in which interference has been reported involve enzymatic coupling of the assay to oxidation-reduction of nicotinamide-adenine dinucleotides (NAD + NADH). Interference is due to the similarity in absorbance peaks of NADH (340 nm) and metronidazole (322 nm) at pH 7.

Metronidazole has shown evidence of carcinogenic activity in a number of studies involving chronic oral administration in mice and rats. Prominent among the effects in the mouse was the promotion of pulmonary tumorigenesis. This has been observed in all six reported studies in that species, including one study in which the animals were dosed on an intermittent schedule (administration during every fourth week only). At very high dose levels (approximately 500 mg/kg/day), there was a statistically significant increase in the incidence of malignant liver tumors in males. Also, the published results of one of the mouse studies indicate an increase in the incidence of malignant lymphomas as well as pulmonary neoplasms associated with lifetime feeding of the drug. All these effects are statistically significant. Several long-term oral dosing studies in the rat have been completed. There were statistically significant increases in the incidence of various neoplasms, particularly in mammary and hepatic tumors, among female rats administered metronidazole over those noted in the concurrent female control groups. Two lifetime tumorigenicity studies in hamsters have been performed and reported to be negative.

These studies have not been conducted with 0.75% metronidazole vaginal gel, which would result in significantly lower systemic blood levels than those obtained with oral formulations.

Although metronidazole has shown mutagenic activity in a number of in vitro assay systems, studies in mammals (in vivo) have failed to demonstrate a potential for genetic damage.

Fertility studies have been performed in mice up to six times the recommended human oral dose (based on mg/m2) and have revealed no evidence of impaired fertility.

There has been no experience to date with the use of metronidazole vaginal gel in pregnant patients. Metronidazole crosses the placental barrier and enters the fetal circulation rapidly. No fetotoxicity or teratogenicity was observed when metronidazole was administered orally to pregnant mice at six times the recommended human dose (based on mg/m2); however, in a single small study where the drug was administered intraperitoneally, some intrauterine deaths were observed. The relationship of these findings to the drug is unknown.

There are, however, no adequate and well-controlled studies in pregnant women. Because animal reproduction studies are not always predictive of human response, and because metronidazole is a carcinogen in rodents, this drug should be used during pregnancy only if clearly needed.

Because of the potential for tumorigenicity shown for metronidazole in mouse and rat studies, a decision should be made whether to discontinue nursing or to discontinue the drug, taking into account the importance of the drug to the mother.

There were no deaths or serious adverse events related to drug therapy in clinical trials involving 800 non-pregnant women who received metronidazole vaginal gel.

Medical events judged to be related, probably related, or possibly related to administration of metronidazole vaginal gel once or twice a day were reported for 195/505 (39%) patients. The incidence of individual adverse reactions were not significantly different between the two regimens. Unless percentages are otherwise stipulated, the incidence of individual adverse reactions listed below was less than 1%:

Other effects that have been reported in association with the use of topical (dermal) formulations of metronidazole include skin irritation, transient skin erythema, and mild skin dryness and burning. None of these adverse events exceeded an incidence of 2% of patients.

The following adverse reactions and altered laboratory tests have been reported with the oral or parenteral use of metronidazole:

Cardiovascular: Flattening of the T-wave may be seen in electrocardiographic tracings.

There is no human experience with overdosage of metronidazole vaginal gel. Vaginally applied Metronidazole Gel, 0.75% could be absorbed in sufficient amounts to produce systemic effects (see WARNINGS).

How is Metronidazole Gel Supplied

Metronidazole vaginal gel, 0.75% is supplied in a 70 gram tube and packaged with 5 vaginal applicators.

In a randomized, single-blind clinical trial of non-pregnant women with bacterial vaginosis who received metronidazole vaginal gel, 0.75% daily for 5 days, the clinical cure rates for evaluable patients determined at 4 weeks after completion of therapy for the QD and BID regimens were 98/185 (53%) and 109/190 (57%), respectively.

• Remove cap and puncture metal seal on tube with the pointed tip of cap. (see Figure 1)
• Screw end of applicator onto tube. (see Figure 2)
• Gently squeeze the tube from the bottom to fill applicator. Plunger will stop when the applicator is full. (see Figure 3)
• Unscrew applicator and replace cap on tube. 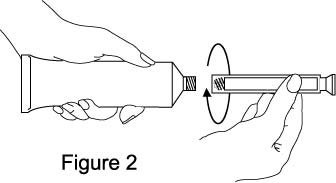 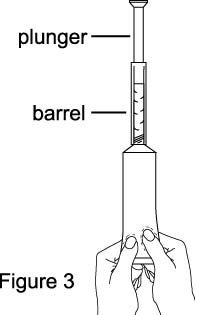 • The applicator may be inserted while lying on your back with your knees bent or in any comfortable position.
• Hold filled applicator by barrel, and gently insert into vagina as far as it will comfortably go. (see Figure 4)
• Slowly press the plunger until it stops to deposit gel into vagina and then withdraw the applicator. 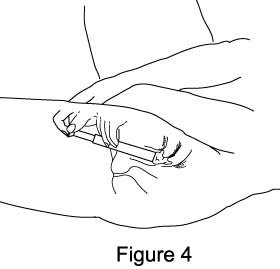 3. Care of the applicator

• After use, pull the plunger out of the barrel. (see Figure 5)
• Wash both plunger and barrel in warm soapy water and rinse thoroughly.
• To reassemble applicator, gently push plunger back into barrel.

• If significant irritation develops from the use of this medication, discontinue use and consult your physician.
• Do not use during pregnancy except under the supervision of a physician.
• Keep this and all medications out of reach of children.
• For vaginal use only. Not for use in the eyes, on the skin or in the mouth.

Store at room temperature. Avoid exposure to extreme heat or cold.
See end of carton and bottom of tube for lot number and expiration date.

FOR INTRAVAGINAL USE ONLY
(NOT FOR OPHTHALMIC, DERMAL OR ORAL USE) 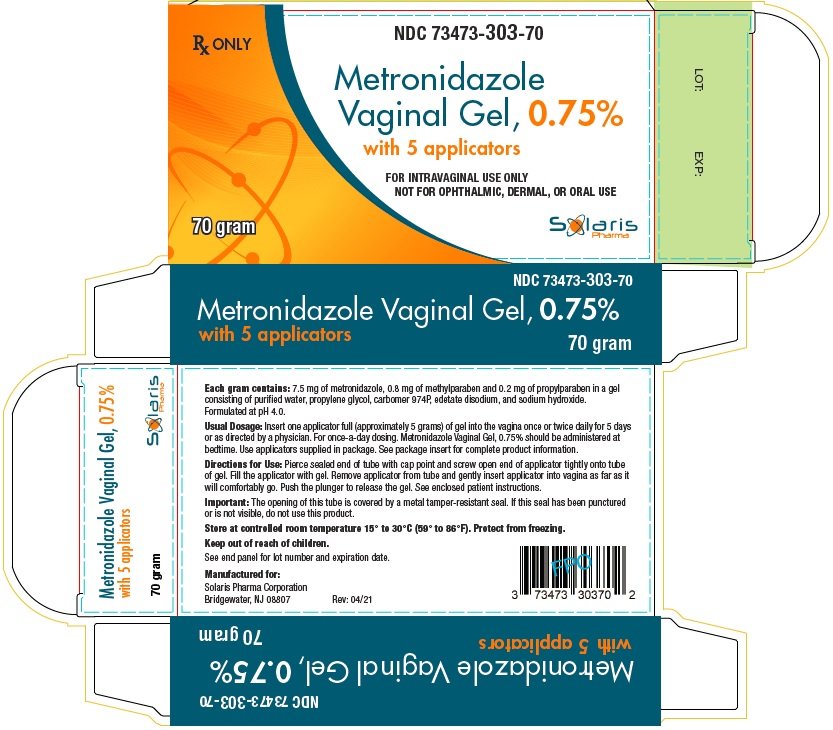