Indications and Usage for Ilumya Injection

ILUMYA® is indicated for the treatment of adults with moderate-to-severe plaque psoriasis who are candidates for systemic therapy or phototherapy.

ILUMYA is administered by subcutaneous injection. The recommended dose is 100 mg at Weeks 0, 4, and every twelve weeks thereafter. Each syringe contains 1 mL of 100 mg/mL tildrakizumab-asmn.

Tuberculosis Assessment Prior to Initiation of ILUMYA

Evaluate patients for tuberculosis (TB) infection prior to initiating treatment with ILUMYA [see Warnings and Precautions (5.3)].

ILUMYA should only be administered by a healthcare provider. Administer ILUMYA subcutaneously. Each pre-filled syringe is for single-dose only. Inject the full amount (1 mL), which provides 100 mg of tildrakizumab per syringe. If a dose is missed, administer the dose as soon as possible. Thereafter, resume dosing at the regularly scheduled interval.

Preparation and Administration of ILUMYA

Before injection, remove ILUMYA carton from the refrigerator, and let the prefilled syringe (in the ILUMYA carton with the lid closed) sit at room temperature for 30 minutes.

Follow the instructions on the ILUMYA carton to remove the prefilled syringe correctly, and remove only when ready to inject. Do not pull off the needle cover until you are ready to inject.

Inspect ILUMYA visually for particulate matter and discoloration prior to administration. ILUMYA is a clear to slightly opalescent, colorless to slightly yellow solution. Do not use if the liquid contains visible particles or the syringe is damaged. Air bubbles may be present; there is no need to remove them.

Choose an injection site with clear skin and easy access (such as abdomen, thighs, or upper arm). Do not administer 2 inches around the navel or where the skin is tender, bruised, erythematous, indurated, or affected by psoriasis. Also do not inject into scars, stretch marks, or blood vessels. 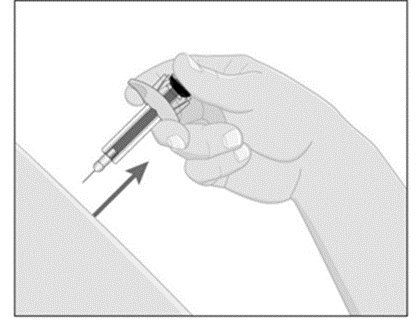 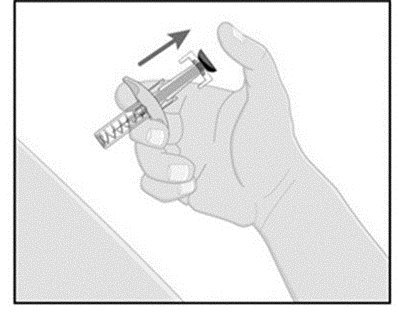 Injection: 100 mg/mL solution in a single-dose prefilled syringe. ILUMYA is a clear to slightly opalescent, colorless to slightly yellow solution.

ILUMYA is contraindicated in patients with a previous serious hypersensitivity reaction to tildrakizumab or to any of the excipients [see Warnings and Precautions (5.1)].

The rates of serious infections for the ILUMYA group and the placebo group were ≤0.3%. Treatment with ILUMYA should not be initiated in patients with any clinically important active infection until the infection resolves or is adequately treated.

Evaluate patients for tuberculosis (TB) infection prior to initiating treatment with ILUMYA. Initiate treatment of latent TB prior to administering ILUMYA. In clinical trials, of 55 subjects with latent TB who were concurrently treated with ILUMYA and appropriate TB prophylaxis, no subjects developed active TB (during the mean follow-up of 56.5 weeks). One other subject developed TB while receiving ILUMYA. Monitor patients for signs and symptoms of active TB during and after ILUMYA treatment. Consider anti-TB therapy prior to initiation of ILUMYA in patients with a past history of latent or active TB in whom an adequate course of treatment cannot be confirmed. Do not administer ILUMYA to patients with active TB infection.

Prior to initiating therapy with ILUMYA, consider completion of all age appropriate immunizations according to current immunization guidelines. Avoid the use of live vaccines in patients treated with ILUMYA. No data are available on the response to live or inactive vaccines.

The following serious adverse reactions are discussed elsewhere in the labeling:

Table 1 summarizes the adverse reactions that occurred at a rate of at least 1% and at a higher rate in the ILUMYA group than in the placebo group.

During the placebo-controlled period of Trials 1, 2, and 3, adverse reactions that occurred at rates less than 1% but greater than 0.1% in the ILUMYA group and at a higher rate than in the placebo group included dizziness and pain in extremity.

Cases of angioedema and urticaria occurred in ILUMYA-treated subjects in clinical trials [see Warnings and Precautions (5.1)].

As with all therapeutic proteins there is the potential for immunogenicity. The detection of antibody formation is highly dependent on the sensitivity and specificity of the assay. Additionally, the observed incidence of antibody (including neutralizing antibody) positivity in an assay may be influenced by several factors including assay methodology, sample handling, timing of sample collection, concomitant medications, and underlying disease. For these reasons, comparison of incidence of antibodies to tildrakizumab in the studies described below with the incidences of antibodies in other studies or to other products may be misleading.

Avoid use of live vaccines in patients treated with ILUMYA [see Warnings and Precautions (5.4)].

Limited available data with ILUMYA use in pregnant women are insufficient to inform a drug associated risk of adverse developmental outcomes. Human IgG is known to cross the placental barrier; therefore, ILUMYA may be transferred from the mother to the fetus. An embryofetal developmental study conducted with tildrakizumab in pregnant monkeys revealed no treatment-related effects to the developing fetus when tildrakizumab was administered subcutaneously during organogenesis to near parturition at doses up to 159 times the maximum recommended human dose (MRHD). When dosing was continued until parturition, a small increase in neonatal death was observed at 59 times the MRHD [see Data].The clinical significance of this nonclinical finding is unknown.

In an embryofetal developmental study, subcutaneous doses up to 300 mg/kg tildrakizumab were administered to pregnant cynomolgus monkeys once every two weeks during organogenesis to gestation day 118 (22 days from parturition). No maternal or embryofetal toxicities were observed at doses up to 300 mg/kg (159 times the MRHD of 100 mg, based on AUC comparison). Tildrakizumab crossed the placenta in monkeys.

The developmental and health benefits of breastfeeding should be considered along with the mother’s clinical need for ILUMYA and any potential adverse effects on the breastfed child from ILUMYA or from the underlying maternal condition.

Very low levels of tildrakizumab were detected in breast milk of monkeys in the pre- and postnatal developmental study described in 8.1. The mean tildrakizumab concentrations in milk were approximately 0.09 – 0.2% of that in serum on postpartum days 28 and 91.

Safety and effectiveness of ILUMYA in pediatric patients (<18 years of age) have not been established.

In the event of overdosage, monitor the patient for any signs or symptoms of adverse reactions and administer appropriate symptomatic treatment immediately.

Tildrakizumab-asmn is a humanized IgG1/k antibody that specifically binds to the p19 subunit of interleukin-23 (IL-23).

Tildrakizumab-asmn is produced in a recombinant Chinese hamster ovary (CHO) cell line and has an approximate molecular mass of 147 kilodaltons.

ILUMYA (tildrakizumab-asmn) injection, for subcutaneous use, is a sterile, clear to slightly opalescent, colorless to slightly yellow solution. ILUMYA is supplied in a single-dose prefilled syringe with a glass barrel and 29-gauge fixed, 1/2-inch needle.

The syringe is fitted with a passive needle guard and a needle cover.

Tildrakizumab is a humanized IgG1/k monoclonal antibody that selectively binds to the p19 subunit of IL-23 and inhibits its interaction with the IL-23 receptor. IL-23 is a naturally occurring cytokine that is involved in inflammatory and immune responses. Tildrakizumab inhibits the release of proinflammatory cytokines and chemokines.

No formal pharmacodynamics studies have been conducted with ILUMYA.

Tildrakizumab pharmacokinetics increases proportionally over a dose range from 50 mg to 200 mg (0.5 to 2 times the approved recommended dosage) following subcutaneous administration in subjects with plaque psoriasis. Steady-state concentrations were achieved by Week 16 following subcutaneous administration of tildrakizumab at Weeks 0, 4, and every 12 weeks thereafter. At the 100 mg dose at Week 16, the mean (± SD) steady-state trough concentrations ranged from 1.22 ± 0.94 mcg/mL to 1.47 ± 1.12 mcg/mL. The geometric mean (CV%) steady-state Cmax was 8.1 mcg/mL (34%).

The absolute bioavailability of tildrakizumab was estimated to be 73-80% following subcutaneous injection. The peak concentration (Cmax) was reached by approximately 6 days.

Tildrakizumab concentrations were lower in subjects with higher body weight.

Animal studies have not been conducted to evaluate the carcinogenic or mutagenic potential of ILUMYA.

No effects on fertility parameters were observed in male or female cynomolgus monkeys that were administered tildrakizumab at subcutaneous or intravenous doses up to 140 mg/kg once every two weeks for 3 months (133 or 155 times the MRHD, respectively, based on AUC comparison). The monkeys were not mated to evaluate fertility.

In both trials, subjects were randomized to either placebo or ILUMYA (100 mg at Week 0, Week 4, and every twelve weeks thereafter [Q12W]) up to 64 weeks.

Trials 2 and 3 assessed the changes from baseline to Week 12 in the two co-primary endpoints:

Other evaluated outcomes in Trials 2 and 3 included the proportion of subjects who achieved a reduction from baseline in PASI score of at least 90% (PASI 90) and a reduction of 100% in PASI score (PASI 100) at Week 12 and maintenance of efficacy up to Week 64.

The results of Trials 2 and 3 are presented in Table 2.

Table 2: Efficacy Results at Week 12 in Adults with Plaque Psoriasis in Trials 2 and 3 (NRI*)

Examination of age, gender, race, and previous treatment with a biologic did not identify differences in response to ILUMYA among these subgroups at Week 12.

In Trial 2, subjects originally randomized to ILUMYA and who were responders at Week 28 (i.e., PASI 75) were re-randomized to an additional 36 weeks of either maintaining the same dose of ILUMYA Q12W (every twelve weeks) or placebo.

For PASI 75 responders at Week 28 who were re-randomized to treatment withdrawal (i.e., placebo), the median time to loss of PASI 75 was approximately 20 weeks.

ILUMYA (tildrakizumab-asmn) Injection is a sterile, preservative-free, clear to slightly opalescent, colorless to slightly yellow solution. ILUMYA is supplied as one single-dose prefilled syringe per carton that delivers 1 mL of a 100 mg/mL solution.

Each prefilled syringe is equipped with a passive needle guard and a needle cover.

Advise the patient and/or caregiver to read the FDA-approved patient labeling (Medication Guide).

Advise patients to seek immediate medical attention if they experience any symptoms of serious hypersensitivity reactions [see Warnings and Precautions (5.1)].

Instruct patients of the importance of communicating any history of infections to the doctor and contacting their doctor if they develop any symptoms of infection [see Warnings and Precautions (5.2)].

This Medication Guide has been approved by the U.S. Food and Drug Administration. Issued: xx/2022

For Subcutaneous Use Only
Dispense the enclosed Medication Guide to each patient.
Single-dose prefilled syringe.
Discard unused portion. 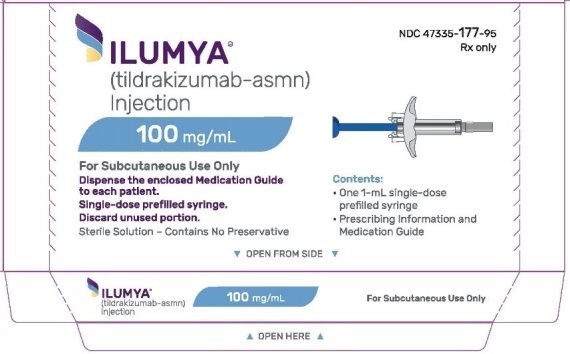