Indications and Usage for Finacea

Finacea Gel, 15% is indicated for topical treatment of the inflammatory papules and pustules of mild to moderate rosacea.

Skin irritation (i.e. pruritus, burning or stinging) may occur during use of Finacea Gel, usually during the first few weeks of treatment. If sensitivity or severe irritation develops and persists, discontinue treatment and institute appropriate therapy.

Worsening of asthma has been reported in patients using azelaic acid formulations including Finacea Gel. Consult a physician if asthma is exacerbated with use of Finacea Gel.

In two vehicle-controlled and one active-controlled U.S. clinical trials, treatment safety was monitored in 788 subjects who used twice-daily Finacea Gel for 12 weeks (N=333) or 15 weeks (N=124), or the gel vehicle (N=331) for 12 weeks. In all three trials, the most common treatment-related adverse events were: burning/stinging/tingling (29%), pruritus (11%), scaling/dry skin/xerosis (8%) and erythema/irritation (4%). In the active-controlled trial, overall adverse reactions (including burning, stinging/tingling, dryness/tightness/scaling, itching, and erythema/irritation/redness) were 19.4% (24/124) for Finacea Gel compared to 7.1% (9/127) for the active comparator gel at 15 weeks.

Finacea Gel and its vehicle caused irritant reactions at the application site in human dermal safety studies. Finacea Gel caused significantly more irritation than its vehicle in a cumulative irritation study. Some improvement in irritation was demonstrated over the course of the clinical trials, but this improvement might be attributed to subject dropouts. No phototoxicity or photoallergenicity were reported in human dermal safety studies.

The following adverse reactions have been identified post approval of Finacea Gel. Because these reactions are reported voluntarily from a population of uncertain size, it is not always possible to reliably estimate the frequency or establish a causal relationship to drug exposure:

Eyes: iridocyclitis upon accidental exposure of the eyes to Finacea Gel.

Azelaic acid is minimally absorbed systemically following topical route of administration, and maternal use is not expected to result in fetal exposure to the drug [see Clinical Pharmacology (12.3)].

In animal reproduction studies, embryofetal toxicity was noted when azelaic acid was administered orally during the period of organogenesis at doses 162, 19, and 65 times the maximum recommended human dose (MRHD) in rats, rabbits, and monkeys, respectively. Maternal toxicity was noted at these doses but no malformations were observed in these embryofetal developmental studies (see Data).

An oral peri- and post-natal developmental study was conducted in rats. Azelaic acid was administered from gestational day 15 through day 21 postpartum up to a dose level of 2500 mg/kg/day. Embryotoxicity was observed in rats at an oral dose of 2500 mg/kg/day (162 times the MRHD based on BSA comparison) that generated some maternal toxicity. In addition, slight disturbances in the post-natal development of fetuses was noted in rats at oral doses that generated some maternal toxicity (500 and 2500 mg/kg/day; 32 and 162 times the MRHD based on BSA comparison). No effects on sexual maturation of the fetuses were noted in this study.

Azelaic acid is naturally present in human milk. When used as prescribed, azelaic acid is unlikely to be absorbed through the skin in clinically relevant amounts to cause a change in azelaic acid concentration in milk or milk production; therefore, breastfeeding is not expected to result in exposure of the infant to Finacea Gel. The developmental and health benefits of breastfeeding should be considered along with the mother's clinical need for Finacea Gel and any potential adverse effects on the breastfed child from Finacea Gel or from the underlying maternal condition.

The safety and effectiveness of Finacea Gel have not been established in pediatric patients.

Clinical studies of Finacea Gel did not include sufficient numbers of subjects aged 65 and over to determine if they respond differently than younger subjects.

Azelaic acid has a molecular weight of 188.22. It is a white, odorless crystalline solid. It is poorly soluble in water at 20°C (0.24%) but freely soluble in boiling water and in ethanol.

The mechanism(s) by which azelaic acid interferes with the pathogenic events in rosacea are unknown.

The pharmacodynamics of azelaic acid in association with the treatment of rosacea are unknown.

In a 2-year dermal mouse carcinogenicity study, azelaic acid pre-foam emulsion was administered twice daily to CD-1 mice at topical doses of 5%, 15%, and 30% (500, 1500, and 3000 mg/kg/day azelaic acid). No drug-related tumors were noted at concentrations up to 30% azelaic acid (396 times the MRHD based on AUC comparison).

Azelaic acid was not mutagenic or clastogenic in a battery of in vitro [Ames assay, HGPRT in V79 cells (Chinese hamster lung cells), and chromosomal aberration assay in human lymphocytes] and in vivo (dominant lethal assay in mice and mouse micronucleus assay) genotoxicity tests.

Oral administration of azelaic acid at dose levels up to 2500 mg/kg/day (162 times the MRHD based on BSA comparison) did not affect fertility or reproductive performance in male or female rats.

Finacea Gel was evaluated for the treatment of mild to moderate papulopustular rosacea in two multicenter, randomized, double-blind, vehicle-controlled, 12-week clinical trials having identical protocols and involving a total of 664 (active: 333; vehicle: 331) subjects aged 21 to 86 years (mean age = 49). Overall, 92.5% of subjects were Caucasian and 73% of subjects were female. Enrolled subjects had mild to moderate rosacea with a mean lesion count of 18 (range 8 to 60) inflammatory papules and pustules. The following subjects were excluded: a) those without papules and pustules; b) those with nodules, rhinophyma, or ocular involvement and c) those with a history of hypersensitivity to propylene glycol or to any other ingredients of the study drug. Finacea Gel or its vehicle were to be applied twice daily for 12 weeks; no other topical or systemic medication affecting the course of rosacea and/or evaluability was to be used during the studies. Subjects were instructed to avoid spicy foods, thermally hot food/drink and alcoholic beverages during the study. Subjects were also instructed to use only very mild soaps or soapless cleansing lotion for facial cleansing.

The primary efficacy endpoints included both 1) change from baseline in inflammatory lesion counts as well as 2) success defined as a score of "clear" or "minimal" with at least a 2-step reduction from baseline on the Investigator's Global Assessment (IGA), defined as follows below:

No papules and/or pustules; no or residual erythema; no or mild to moderate telangiectasia

Primary efficacy assessment was based on the "intent-to-treat" (ITT) population with the "last observation carried forward" (LOCF).

Both trials demonstrated a statistically significant difference in favor of Finacea Gel over its vehicle in both reducing the number of inflammatory papules and pustules associated with rosacea (Table 2) as well as demonstrating success on the IGA in the ITT-LOCF population at the end of treatment.

Finacea Gel was superior to the vehicle with regard to success based on the IGA of rosacea on a 7-point static score at the end of treatment (ITT population; Table 3).

For Topical Use Only
Not for oral, ophthalmic or intravaginal use 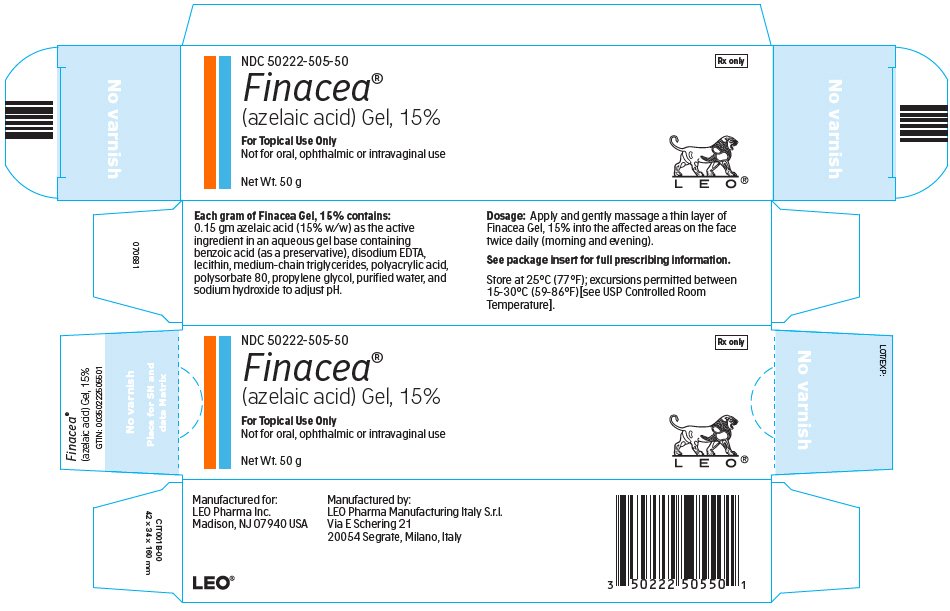