Estramustine phosphate (Figure 1) is a molecule combining estradiol and nornitrogen mustard by a carbamate link. The molecule is phosphorylated to make it water soluble. 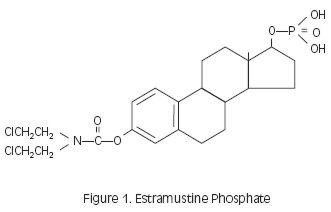 Estramustine phosphate taken orally is readily dephosphorylated during absorption, and the major metabolites in plasma are estramustine (Figure 2), the estrone analog (Figure 3), estradiol, and estrone. 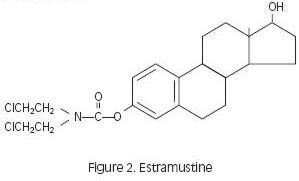 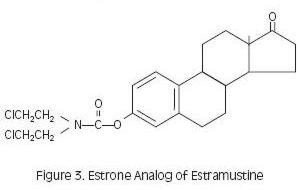 Prolonged treatment with estramustine phosphate produces elevated total plasma concentrations of estradiol that fall within ranges similar to the elevated estradiol levels found in prostatic cancer patients given conventional estradiol therapy. Estrogenic effects, as demonstrated by changes in circulating levels of steroids and pituitary hormones, are similar in patients treated with either estramustine phosphate or conventional estradiol.

Indications and Usage for Emcyt

Emcyt Capsules are indicated in the palliative treatment of patients with metastatic and/or progressive carcinoma of the prostate.

Emcyt Capsules should not be used in patients with any of the following conditions:

1)
Known hypersensitivity to either estradiol or to nitrogen mustard.
2)
Active thrombophlebitis or thromboembolic disorders, except in those cases where the actual tumor mass is the cause of the thromboembolic phenomenon and the physician feels the benefits of therapy may outweigh the risks.

It has been shown that there is an increased risk of thrombosis, including fatal and nonfatal myocardial infarction, in men receiving estrogens for prostatic cancer. Emcyt Capsules should be used with caution in patients with a history of thrombophlebitis, thrombosis, or thromboembolic disorders, especially if they were associated with estrogen therapy. Caution should also be used in patients with cerebral vascular or coronary artery disease.

Glucose Tolerance—Because glucose tolerance may be decreased, diabetic patients should be carefully observed while receiving Emcyt.

Fluid Retention. Exacerbation of preexisting or incipient peripheral edema or congestive heart disease has been seen in some patients receiving therapy with Emcyt Capsules. Other conditions which might be influenced by fluid retention, such as epilepsy, migraine, or renal dysfunction, require careful observation.

Emcyt may be poorly metabolized in patients with impaired liver function and should be administered with caution in such patients.

Because Emcyt may influence the metabolism of calcium and phosphorus, it should be used with caution in patients with metabolic bone diseases that are associated with hypercalcemia or in patients with renal insufficiency. Patients with prostate cancer and osteoblastic metastases are at risk for hypocalcemia and should have calcium levels closely monitored.

Allergic reactions and angioedema at times involving the airway have been reported.

Because of the possibility of mutagenic effects, patients should be advised to use contraceptive measures.

Certain endocrine and liver function tests may be affected by estrogen-containing drugs. Emcyt may depress testosterone levels. Abnormalities of hepatic enzymes and of bilirubin have occurred in patients receiving Emcyt. Such tests should be done at appropriate intervals during therapy and repeated after the drug has been withdrawn for two months.

Milk, milk products, and calcium-rich foods or drugs may impair the absorption of Emcyt.

Long-term continuous administration of estrogens in certain animal species increases the frequency of carcinomas of the breast and liver. Compounds structurally similar to Emcyt are carcinogenic in mice. Carcinogenic studies of Emcyt have not been conducted in man. Although testing by the Ames method failed to demonstrate mutagenicity for estramustine phosphate sodium, it is known that both estradiol and nitrogen mustard are mutagenic. For this reason and because some patients who had been impotent while on estrogen therapy have regained potency while taking Emcyt, the patient should be advised to use contraceptive measures.

In a randomized, double-blind trial comparing therapy with Emcyt Capsules in 93 patients (11.5 to 15.9 mg/kg/day) or diethylstilbestrol (DES) in 93 patients (3.0 mg/day), the following adverse effects were reported:

Although there has been no experience with overdosage to date, it is reasonable to expect that such episodes may produce pronounced manifestations of the known adverse reactions. In the event of overdosage, the gastric contents should be evacuated by gastric lavage and symptomatic therapy should be initiated. Hematologic and hepatic parameters should be monitored for at least 6 weeks after overdosage of Emcyt Capsules.

The recommended daily dose is 14 mg per kg of body weight (ie, one 140 mg capsule for each 10 kg or 22 lb of body weight), given in 3 or 4 divided doses. Most patients in studies in the United States have been treated at a dosage range of 10 to 16 mg per kg per day.

Patients should be instructed to take Emcyt Capsules at least 1 hour before or 2 hours after meals. Emcyt should be swallowed with water. Milk, milk products, and calcium-rich foods or drugs (such as calcium-containing antacids) must not be taken simultaneously with Emcyt.

Patients should be treated for 30 to 90 days before the physician determines the possible benefits of continued therapy. Therapy should be continued as long as the favorable response lasts. Some patients have been maintained on therapy for more than 3 years at doses ranging from 10 to 16 mg per kg of body weight per day.

Procedures for proper handling and disposal of anticancer drugs should be considered. Several guidelines on this subject have been published.1–8 There is no general agreement that all of the procedures recommended in the guidelines are necessary or appropriate.

How is Emcyt Supplied 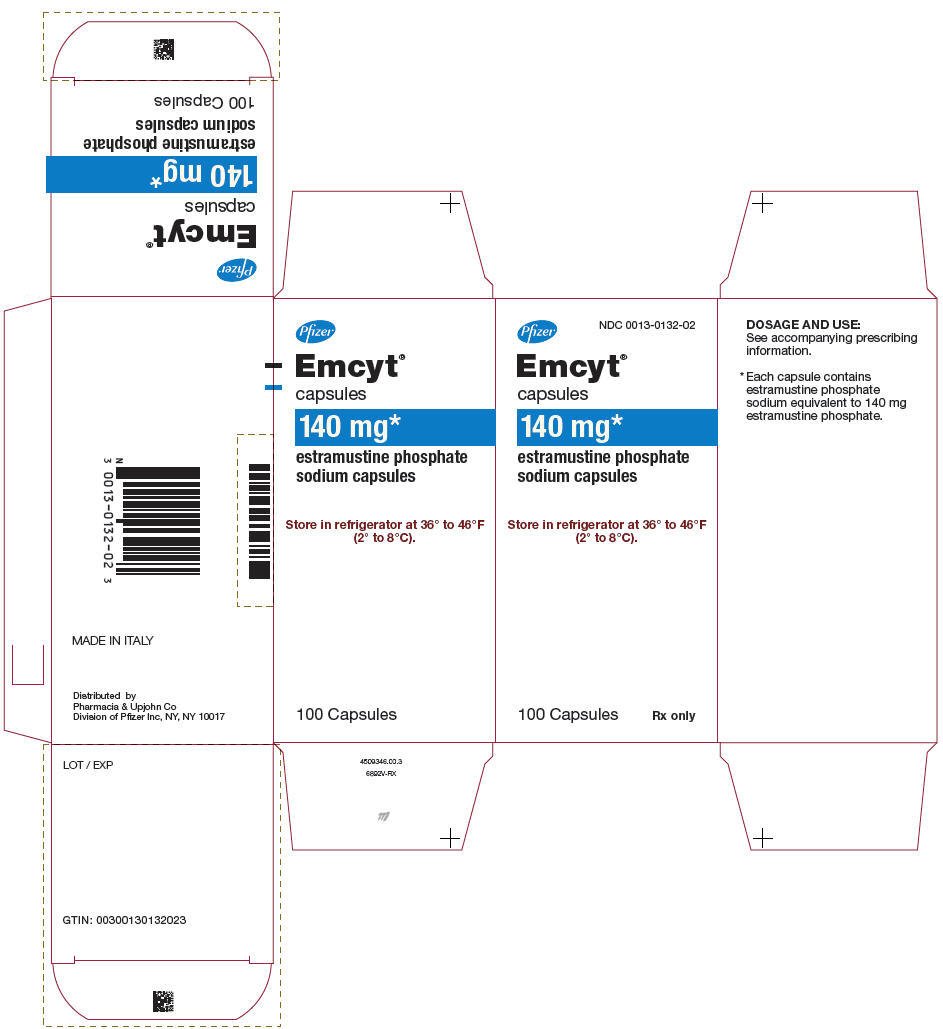 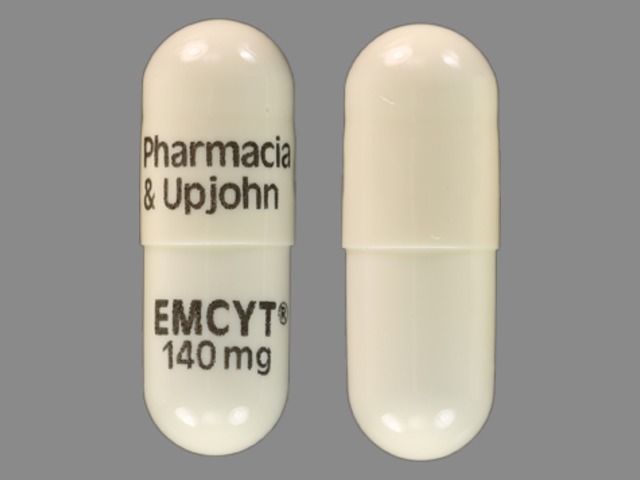