Durysta is an ophthalmic drug delivery system for a single intracameral administration of a biodegradable implant. Durysta should not be readministered to an eye that received a prior Durysta.

The intracameral injection procedure must be performed under magnification that allows clear visualization of the anterior chamber structures and should be carried out using standard aseptic conditions for intracameral procedures, with the patient’s head in a stabilized position. The eye should not be dilated prior to the procedure. 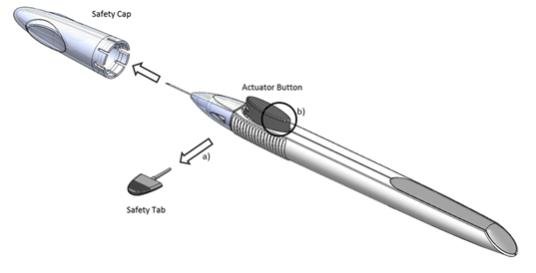 Perform a detailed visual inspection of the applicator, including ensuring that the actuator button has not been depressed, and the safety tab is in place. Carefully remove the plastic safety cap taking care to avoid contacting the needle tip. Inspect the needle tip for damage under magnification prior to use; the implant retention plug may be visible in the bevel and should not be removed.

Prior to use, remove the safety tab by pulling it out perpendicular to the long axis of the applicator (refer to Figure 1a above). Do not twist or bend the tab.

The needle should be inserted approximately 2 bevel lengths with the bevel completely within the anterior chamber; avoid positioning the needle bevel directly over the pupil. Ensure the needle is not bent before depressing the actuator button. See Figure 2.

Depress the back half of the actuator button (refer to Figure 1b above) firmly until an audible and/or palpable click is noted.

Following the release of the implant, remove the needle via the same track in which it was inserted and tamponade the opening. The implant should not be left in the corneal injection track.

Check the injection site for leaks; make sure that it is self-sealing and the anterior chamber is formed.

After injection, do not recap the needle. Dispose of the used applicator in a sharps disposal container and in accordance with local requirements.

Instruct the patient to remain upright for at least 1 hour after the procedure so the implant can settle.

Some degree of eye redness and discomfort is expected following administration. However, it is recommended to instruct patients that if the eye becomes progressively red, sensitive to light, painful, or develops a change in vision, they should immediately contact the physician.

Durysta is contraindicated in patients with active or suspected ocular or periocular infections.

Durysta is contraindicated in patients with hypersensitivity to bimatoprost or to any other components of the product [see Adverse Reactions (6.1)].

Following administration with Durysta, the intracameral implant is intended to settle within the inferior angle. Durysta should be used with caution in patients with narrow iridocorneal angles (Shaffer grade ˂ 3) or anatomical obstruction (e.g., scarring) that may prohibit settling in the inferior angle.

Intraocular surgical procedures and injections have been associated with endophthalmitis. Proper aseptic technique must always be used with administering Durysta, and patients should be monitored following the administration.

The most common nonocular adverse reaction was headache, which was observed in 5% of patients.

There are no adequate and well-controlled studies of Durysta (bimatoprost intracameral implant) administration in pregnant women to inform a drug associated risk. Oral administration of bimatoprost to pregnant rats and mice throughout organogenesis did not produce adverse maternal or fetal effects at clinically relevant exposures. Oral administration of bimatoprost to rats from the start of organogenesis to the end of lactation did not produce adverse maternal, fetal or neonatal effects at clinically relevant exposures [see Animal Data].

The developmental and health benefits of breastfeeding should be considered, along with the mother's clinical need for Durysta and any potential adverse effects on the breastfed child from Durysta.

Safety and effectiveness of Durysta in pediatric patients have not been established.

No overall differences in safety or effectiveness have been observed between elderly and other adult patients.

Durysta is a sterile intracameral implant containing 10 mcg of bimatoprost, a prostaglandin analog, in a solid polymer sustained-release drug delivery system (DDS). The drug delivery system consists of poly (D,L-lactide), poly (D,L-lactide-co-glycolide), poly (D,L-lactide) acid end, and polyethylene glycol 3350. Durysta is preloaded into a single-use, DDS applicator to facilitate injection of the rod-shaped implant directly into the anterior chamber of the eye. The chemical name for bimatoprost is (Z)-7-[(1R,2R,3R,5S)-3,5-dihydroxy-2-[(1E,3S)-3-hydroxy-5-phenyl-1-pentenyl]cyclopentyl]-N-ethyl-5-heptenamide, and its molecular weight is 415.57. Its molecular formula is C25H37NO4. Its structural formula is: 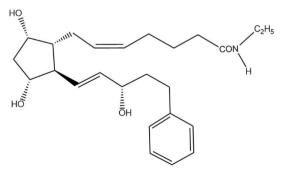 Bimatoprost, a prostaglandin analog, is a synthetic structural analog of prostaglandin with ocular hypotensive activity. Bimatoprost is believed to lower IOP in humans by increasing outflow of aqueous humor through both the trabecular meshwork (conventional) and uveoscleral routes (unconventional). Elevated IOP presents a major risk factor for glaucomatous field loss. The higher the level of IOP, the greater the likelihood of optic nerve damage and visual field loss.

Bimatoprost was not carcinogenic in either mice or rats when administered by oral gavage at doses up to 2 mg/kg/day and 1 mg/kg/day respectively for 104 weeks (approximately 3100 and 1700 times, respectively, the maximum human exposure [based on plasma Cmax levels; blood-to-plasma partition ratio of 0.858]).

Bimatoprost was not mutagenic or clastogenic in the Ames test, in the mouse lymphoma test, or in the in vivo mouse micronucleus tests.

Bimatoprost did not impair fertility in male or female rats up to doses of 0.6 mg/kg/day (1770-times the maximum human exposure, based on plasma Cmax; blood-to-plasma partition ratio of 0.858).

Efficacy was evaluated in two multicenter, randomized, parallel-group, controlled 20-month (including 8-month extended follow-up) studies of Durysta compared to twice daily topical timolol 0.5% drops, in patients with OAG or OHT. Durysta demonstrated an IOP reduction of approximately 5-8 mmHg in patients with a mean baseline IOP of 24.5 mmHg (see Figures 3 and 4). 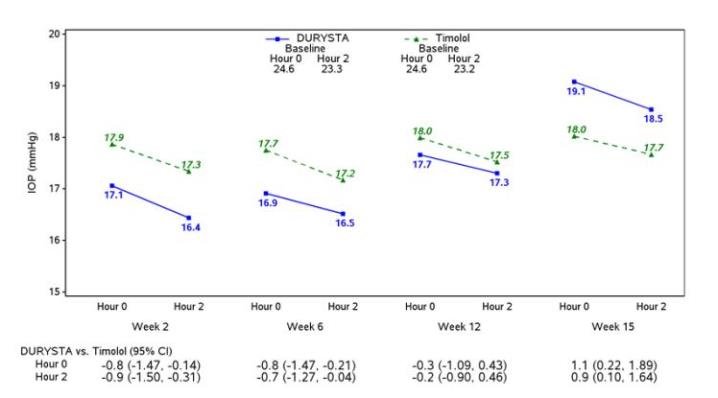 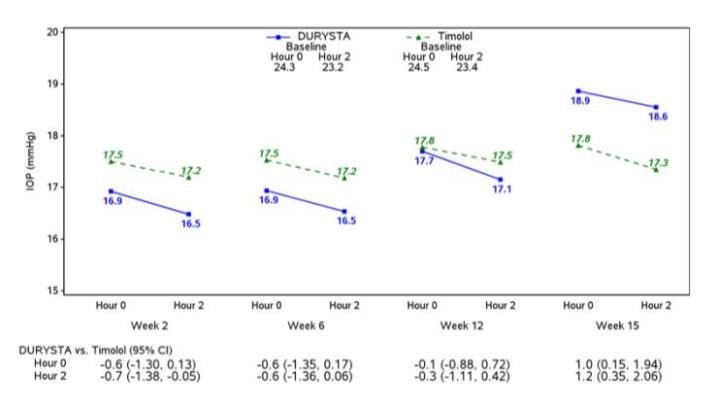 Durysta contains a 10 mcg bimatoprost intracameral implant in a single-use applicator that is packaged in a sealed foil pouch containing desiccant, NDC 0023-9652-01.

Advise patients about the potential risk for complications including, but not limited to, the development of corneal adverse events, intraocular inflammation or endophthalmitis [see Warnings and Precautions (5.1, 5.4, 5.6)].

Advise patients about the potential for increased brown pigmentation of the iris, which may be permanent [see Warnings and Precautions (5.5)].

When to Seek Physician Advice

Advise patients that if the eye becomes red, sensitive to light, painful, or develops a change in vision, they should seek immediate care from an ophthalmologist [see Warnings and Precautions (5.6)]. 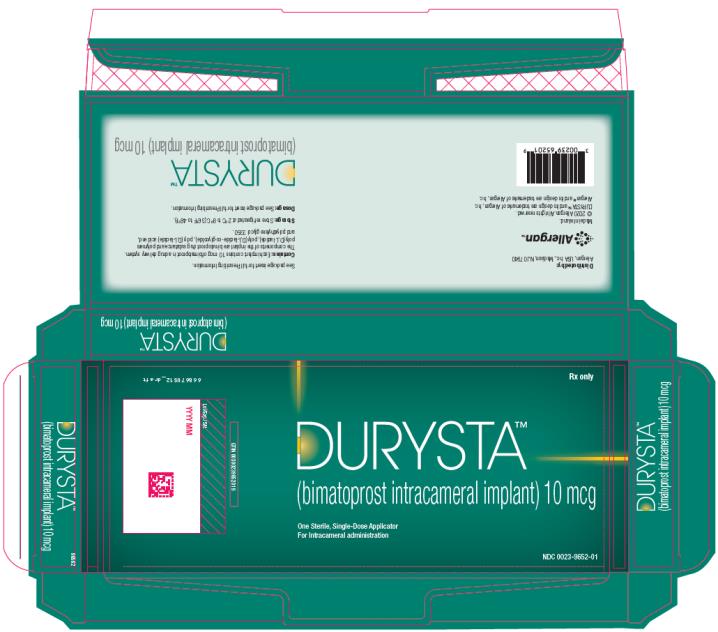