Instill one drop of Betoptic S in the affected eye(s) twice daily. Shake well before using.

Betoptic S may be used alone or in combination with other IOP lowering medications. Advise patients requiring concomitant topical ophthalmic medications to administer these at least 10 minutes before instilling Betoptic S.

Betoptic S is contraindicated in patients with:

As with many topically applied ophthalmic drugs, this drug is absorbed systemically. The same adverse reactions found with systemic administration of beta-adrenergic receptor inhibitors may occur with topical administration. For example, severe respiratory reactions and cardiac reactions, including death due to bronchospasm in patients with asthma, and death due to cardiac failure, have been reported with topical application of beta-adrenergic receptor inhibitors.

Beta-adrenergic receptor inhibitors should be administered with caution in patients subject to hypoglycemia or to diabetic patients (especially those with labile diabetes) who are receiving insulin or oral hypoglycemic agents.

Beta-adrenergic receptor inhibitors may mask the signs and symptoms of acute hypoglycemia.

Caution should be exercised in the treatment of glaucoma patients with excessive restriction of pulmonary function. There have been reports of asthmatic attacks and pulmonary distress during betaxolol treatment. Although rechallenges of some such patients with ophthalmic betaxolol has not adversely affected pulmonary function test results, the possibility of adverse pulmonary effects in patients sensitive to beta-adrenergic receptor inhibitors cannot be ruled out.

Because of potential effects of beta-adrenergic receptor inhibitors on blood pressure and pulse, these inhibitors should be used with caution in patients with vascular insufficiency. If signs or symptoms suggesting reduced cerebral blood flow or Raynaud’s phenomenon develop following initiation of therapy with Betoptic S, alternative therapy should be considered.

Bacterial keratitis may occur with use of multiple dose containers of topical ophthalmic products when these containers are inadvertently contaminated by patients who, in most cases, had a concurrent corneal disease or a disruption of the ocular epithelial surface. Instruct patients on appropriate instillation techniques [see Patient Counseling Information (17)].

Choroidal detachment after filtration procedures has been reported with the administration of aqueous suppressant therapy.

The preservative in Betoptic S, benzalkonium chloride, may be absorbed by soft contact lenses. Contact lenses should be removed during instillation of Betoptic S but may be reinserted 15 minutes after instillation [see Patient Counseling Information (17)].

In clinical trials, the most frequent adverse reaction associated with the use of Betoptic S has been transient ocular discomfort. The following other adverse reactions have been reported in small numbers of patients:

Other: Hives, toxic epidermal necrolysis, hair loss and glossitis. Perversions of taste and smell have been reported.

In a 3-month, double-masked, active-controlled, multicenter study in pediatric patients, the adverse reaction profile of Betoptic S was comparable to that seen in adult patients.

Patients who are receiving a beta-adrenergic receptor inhibitor orally and Betoptic S should be observed for a potential additive effect either on the IOP or on the known systemic effects of beta blockade.

Close observation of the patient is recommended when a beta-adrenergic receptor inhibitor is administered to patients receiving catecholamine-depleting drugs, such as reserpine, because of possible additive effects and the production of hypotension and/or bradycardia, which may result in vertigo, syncope, or postural hypotension.

The concomitant use of a beta-adrenergic receptor inhibitor with calcium antagonists, antiarrhythmics (including amiodarone) or digitalis may have additive effects resulting in hypotension and/or marked bradycardia.

There are no adequate and well-controlled studies of Betoptic S administration in pregnant women to inform a drug-associated risk. There are limited data with the use of betaxolol eye drops in pregnant women. Epidemiological studies have not revealed malformative effects but show a risk for intrauterine growth retardation when beta-blockers are administered by the oral route.

Because animal reproductive studies are not always predictive of human response, Betoptic S should be used during pregnancy only if the potential benefit justifies the potential risk to the fetus.

In the U.S. general population, the estimated background risk of major birth defects is 2% to 4% and of miscarriage is 15% to 20% of clinically recognized pregnancies.

In a prenatal and postnatal development study in rats, an oral betaxolol dose of 150 mg/kg/day (2920 times higher than the MRHOD, on mg/m2 basis) administered throughout the entire gestation period and lactation, resulted in maternal and developmental toxicity in F1 offspring, including decreased offspring survival, body weight and growth/development and functional deficits in surviving offspring. No NOAEL for developmental or maternal toxicity was established in this study.

Beta-blockers are excreted in breast milk following oral administration, having the potential to cause serious undesirable effects in the infant of the nursing mother. It is not known whether measurable levels of betaxolol would be present in maternal milk following topical ocular administration.

The developmental and health benefits of breastfeeding should be considered along with the mother’s clinical need for Betoptic S, and any potential adverse effects on the breast-fed child from Betoptic S.

Safety and IOP lowering effect of Betoptic S has been demonstrated in pediatric patients in a 3 month, multicenter, double-masked, active-controlled trial.

No information is available on overdosage in humans. The oral LD50 of the drug ranged from 350 to 920 mg/kg in mice and 860 to 1,050 mg/kg in rats. The symptoms which might be expected with an overdose of a systemically administered beta-adrenergic receptor inhibitor are bradycardia, hypotension, bronchospasm, and acute cardiac failure.

A topical overdose of Betoptic S may be flushed from the eye(s) with warm tap water. If overdose occurs, treatment should be symptomatic and supportive.

Betoptic S contains betaxolol hydrochloride, a cardioselective beta-adrenergic receptor inhibitor, in a sterile resin suspension formulation. Betaxolol hydrochloride is a white, crystalline powder, with a molecular weight of 343.89 g/mol. The chemical structure is presented below.

When instilled in the eye, Betoptic S has the action of reducing elevated IOP, whether or not accompanied by glaucoma. Ophthalmic betaxolol has minimal effect on pulmonary and cardiovascular parameters.

Elevated IOP presents a major risk factor in glaucomatous field loss. The higher the level of IOP, the greater the likelihood of optic nerve damage and visual field loss. Betaxolol has the action of reducing elevated as well as normal IOP and the mechanism of ocular hypotensive action appears to be a reduction of aqueous production as demonstrated by tonography and aqueous fluorophotometry.

The onset of action with betaxolol can generally be noted within 30 minutes and the maximum effect can usually be detected 2 hours after topical administration. A single dose provides a 12-hour reduction in IOP. In some patients, the IOP lowering responses to Betoptic S may require a few weeks to stabilize. As with any new medication, careful monitoring of patients is advised.

Ophthalmic betaxolol solution at 1% (one drop in each eye) was compared to placebo in a crossover study challenging nine patients with reactive airway disease. Betaxolol HCl had no significant effect on pulmonary function as measured by forced expiratory volume in 1 second (FEV1), forced vital capacity (FVC), FEV1/FVC, and was not significantly different from placebo. The action of isoproterenol, a beta stimulant, administered at the end of the study was not inhibited by ophthalmic betaxolol.

No evidence of cardiovascular beta-adrenergic blockade during exercise was observed with betaxolol in a double-masked, crossover study in 24 normal subjects comparing ophthalmic betaxolol and placebo for effects on blood pressure and heart rate.

In 2-year carcinogenicity studies, betaxolol HCl demonstrated no carcinogenic effect at doses up to 60 mg/kg/day in mice and 48 mg/kg/day in rats (584 and 934 times higher than the MRHOD, on a mg/m2 basis, respectively).

In a variety of in vitro and in vivo bacterial and mammalian cell assays, betaxolol HCl was not mutagenic.

Betaxolol did not adversely affect fertility or mating performance of male or female rats at doses up to 256 mg/kg/day (4982 times higher than the MRHOD, on a mg/m2 basis).

Betoptic S (betaxolol hydrochloride ophthalmic suspension), 0.25% is supplied as follows: 10 mL and 15 mL in plastic ophthalmic dispensers. Tamper evidence is provided with a shrink band around the closure and neck area of the package.

After opening, Betoptic S can be used until the expiration date on the bottle.

Avoiding Contamination of the Product

Instruct patients to avoid allowing the tip of the dispensing container to contact the eye(s) or surrounding structures. Also instruct patients that ocular solutions, if handled improperly, could become contaminated by common bacteria known to cause ocular infections. Serious damage to the eye(s) and subsequent loss of vision may result from using contaminated solutions.

Advise patients that if they have ocular surgery or develop an intercurrent ocular condition (e.g., trauma or infection), they should immediately seek their physician’s advice concerning the continued use of the present multi-dose container.

Vision may be temporarily blurred following dosing with Betoptic S. Care should be exercised in operating machinery or driving a motor vehicle.

(betaxolol HCI ophthalmic suspension) 0.25% as base 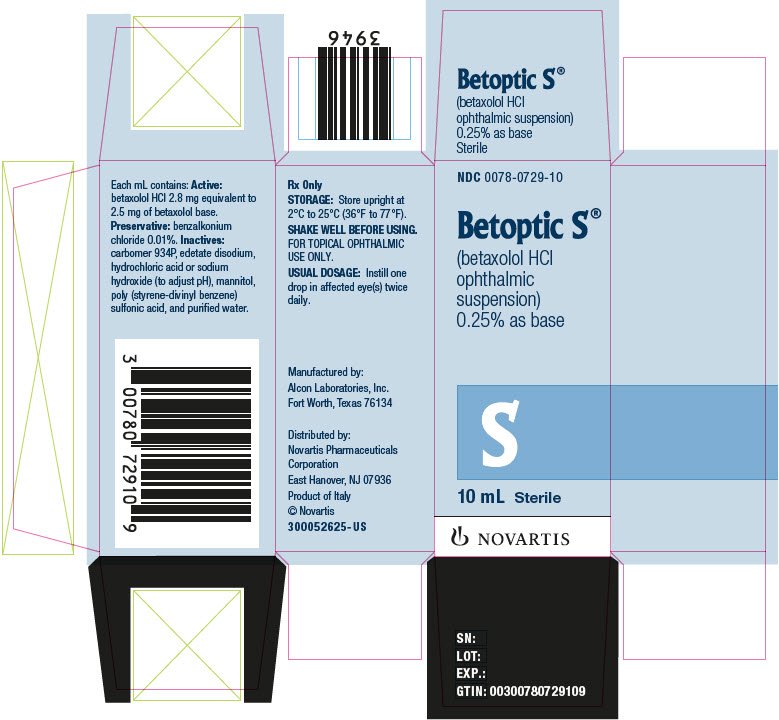