The Atridox® product* is a subgingival controlled-release product composed of a two syringe mixing system. Syringe A contains 450 mg of the ATRIGEL® Delivery System, which is a bioabsorbable, flowable polymeric formulation composed of 36.7% poly(DL-lactide) (PLA) dissolved in 63.3% N-methyl-2-pyrrolidone (NMP). Syringe B contains 50 mg of doxycycline hyclate which is equivalent to 42.5 mg doxycycline. The constituted product is a pale yellow to yellow viscous liquid with a concentration of 10% of doxycycline hyclate. Upon contact with the crevicular fluid, the liquid product solidifies and then allows for controlled release of drug for a period of 7 days.

Doxycycline is a broad-spectrum antibiotic synthetically derived from oxytetracycline.

The structural formula of doxycycline hyclate is:

Doxycycline is a broad-spectrum semisynthetic tetracycline.1 Doxycycline is bacteriostatic, inhibiting bacterial protein synthesis due to disruption of transfer RNA and messenger RNA at ribosomal sites.1In vitro testing has shown that Porphyromonas gingivalis, Prevotella intermedia, Campylobacter rectus, and Fusobacterium nucleatum, which are associated with periodontal disease, are susceptible to doxycycline at concentrations ≤ 6.0 µg/mL.2 A single-center, single-blind, randomized, clinical study in 45 subjects with periodontal disease demonstrated that a single treatment with Atridox® resulted in the reduction in the numbers of P. gingivalis, P. intermedia, C. rectus, F. nucleatum, Bacteroides forsythus, and E. corrodens in subgingival plaque samples. Levels of aerobic and anaerobic bacteria were also reduced after treatment with Atridox®. The clinical significance of these findings, however, is not known. During these studies, no overgrowth of opportunistic organisms such as Gram-negative bacilli and yeast were observed. However, as with other antibiotic preparations, Atridox® therapy may result in the overgrowth of nonsusceptible organisms including fungi. (See PRECAUTIONS)

Doxycycline levels in GCF peaked (~1,500 µg/mL and ~2000 µg/mL for Coe-Pak™ and Octyldent™ groups, respectively) 2 hours following treatment with Atridox®. These levels remained above 1000 µg/mL through 18 hours, at which time the levels began to decline gradually. However, local levels of doxycycline remained well above the minimum inhibitory concentration (MIC90) for periodontal pathogens (≤ 6.0 µg/mL)2 through Day 7. In contrast, subjects receiving oral doxycycline had peak GCF levels of ~2.5 µg/mL at 12 hours following the initial oral dosing with levels declining to ~0.2 µg/mL by Day 7. High variability was observed for doxycycline levels in GCF for both oral and Atridox® treatment groups.

The Atridox® doxycycline release profile in GCF is illustrated in the figure below.

The maximum concentration of doxycycline in saliva was achieved at 2 hours after both treatments with Atridox®, with means of 4.05 µg/mL and 8.78 µg/mL and decreased to 0.36 µg/mL and 0.23 µg/mL at Day 7 for the Coe-Pak™ group and the Octyldent™ group, respectively.

The concentration of doxycycline in serum following treatment of Atridox® never exceeded 0.1 µg/mL.

In two well-controlled, multicenter, parallel-design, nine-month clinical trials, 831 patients (Study 1=411; Study 2=420) with chronic adult periodontitis characterized by a mean probing depth of 5.9 to 6.0 mm were enrolled. Subjects received one of four treatments: 1) Atridox®, 2) Scaling and Root Planing, 3) Vehicle Control, or 4) Oral Hygiene. Treatment was administered to sites with probing depths 5 mm or greater that bled on probing. Subjects with detectable subgingival calculus on greater than 80% of all tooth surfaces were excluded from enrollment. All subjects received a second administration of the initially randomized treatment four months after their Baseline treatment. Changes in the efficacy parameters, attachment level, pocket depth, and bleeding on probing, between Baseline and Month 9 showed that: 1) Atridox® was superior to Vehicle Control and Oral Hygiene, and 2) Atridox® met the decision rule of being at least 75% as good as Scaling and Root Planing (SRP) (the standard of at least 75% as good as SRP is required for any product approved as a stand alone therapy for periodontitis). Clinicians should note that the studies were of nine months duration. Additional research would be necessary to establish long term comparability to SRP. The results of Studies #1 and 2 for efficacy parameters of attachment level gain and probing depth reduction are included in the following graphs. 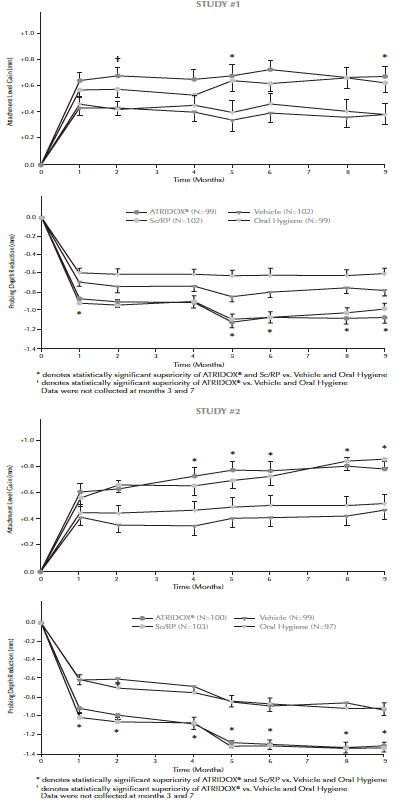 Atridox® is indicated for use in the treatment of chronic adult periodontitis for a gain in clinical attachment, reduction in probing depth, and reduction in bleeding on probing.

Atridox® should not be used in patients who are hypersensitive to doxycycline or any other drug in the tetracycline class.

THE USE OF DRUGS OF THE TETRACYCLINE CLASS DURING TOOTH DEVELOPMENT (LAST HALF OF PREGNANCY, INFANCY, AND CHILDHOOD TO THE AGE OF EIGHT YEARS) MAY CAUSE PERMANENT DISCOLORATION OF THE TEETH. This adverse reaction is more common during long-term use of the drugs, but has been observed following repeated short-term courses. Enamel hypoplasia has also been reported. TETRACYCLINE DRUGS, THEREFORE, SHOULD NOT BE USED IN THIS AGE GROUP, OR IN PREGNANT WOMEN, UNLESS OTHER DRUGS ARE NOT LIKELY TO BE EFFECTIVE OR ARE CONTRAINDICATED. Results of animal studies indicate that tetracyclines cross the placenta, are found in fetal tissues, and can have toxic effects on the developing fetus (often related to skeletal development). Evidence of embryotoxicity has also been noted in animals treated early in pregnancy. If any tetracycline is used during pregnancy, the patient should be apprised of the potential hazard to the fetus.

Photosensitivity manifested by an exaggerated sunburn reaction has been observed in some individuals taking doxycycline or other tetracyclines. Patients apt to be exposed to direct sunlight or ultraviolet light should be advised that this reaction can occur with tetracycline drugs.

Atridox® has not been clinically tested in pregnant women.

Atridox® has not been clinically evaluated in patients with conditions involving extremely severe periodontal defects with very little remaining periodontium.

Atridox® has not been clinically tested for use in the regeneration of alveolar bone, either in preparation for or in conjunction with the placement of endosseous (dental) implants or in the treatment of failing implants.

As with other antibiotic preparations, Atridox® therapy may result in overgrowth of nonsusceptible organisms, including fungi.1 The effects of prolonged treatment, greater than six months, have not been studied.

Doxycycline may decrease the effectiveness of birth control pills.

Long-term studies in animals to evaluate carcinogenic potential of doxycycline have not been conducted. However, there has been evidence of oncogenic activity in rats in studies with the related antibiotics, oxytetracycline (adrenal and pituitary tumors), and minocycline (thyroid tumors). Likewise, although mutagenicity studies of doxycycline have not been conducted, positive results in in vitro mammalian cell assays have been reported for related antibiotics (tetracycline, oxytetracycline). Doxycycline administered orally at dosage levels as high as 250 mg/kg/day had no apparent effect on the fertility of female rats. Effect on male fertility has not been studied.

Tetracyclines appear in breast milk following oral administration. It is not known whether doxycycline is excreted in human milk following use of Atridox®. Because of the potential for serious adverse reactions in nursing infants from doxycycline, a decision should be made whether to discontinue nursing or to discontinue the drug, taking into account the importance of the drug to the mother. (See WARNINGS)

The safety and effectiveness of Atridox® in pediatric patients have not been established. Oral doses of doxycycline in children up to 8 years of age have caused permanent discoloration of teeth.

In clinical trials involving a total of 1436 patients, adverse experiences from all causalities were monitored across treatment groups.

Two patients in the polymer vehicle group and none in the Atridox® group (0.2% for both groups combined) reported adverse events consistent with a localized allergic response.

Sex, age, race and smoking status did not appear to be correlated with adverse events.

The following table lists the incidence of treatment-emergent adverse events from all causalities, across all treatment groups, occurring in ≥1% of the entire study population.

Atridox® is a variable dose product dependent on the size, shape, and number of pockets being treated.

Cover the pockets containing Atridox® with either Coe-Pak™ periodontal dressing or a cyanoacrylate dental adhesive.

Application of Atridox® may be repeated four months after initial treatment.

Each Atridox® syringe system is intended for use in only one patient. Do not use if packaging has been previously opened or damaged. 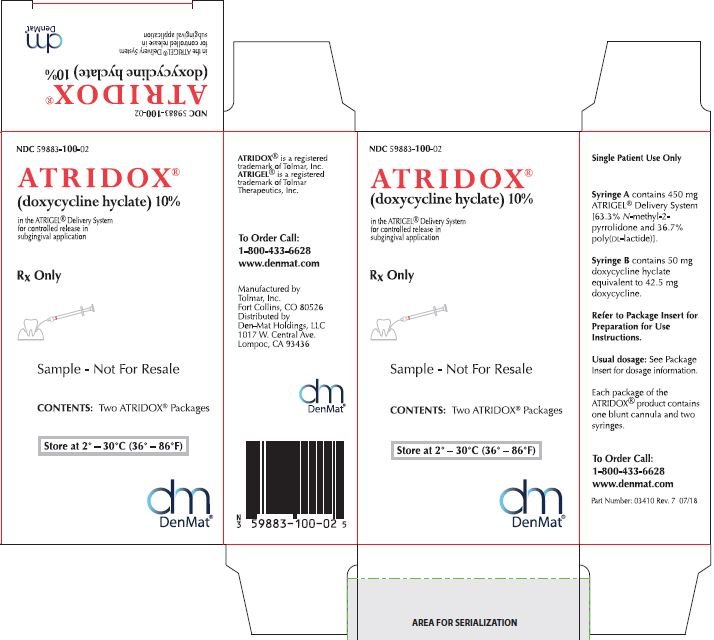 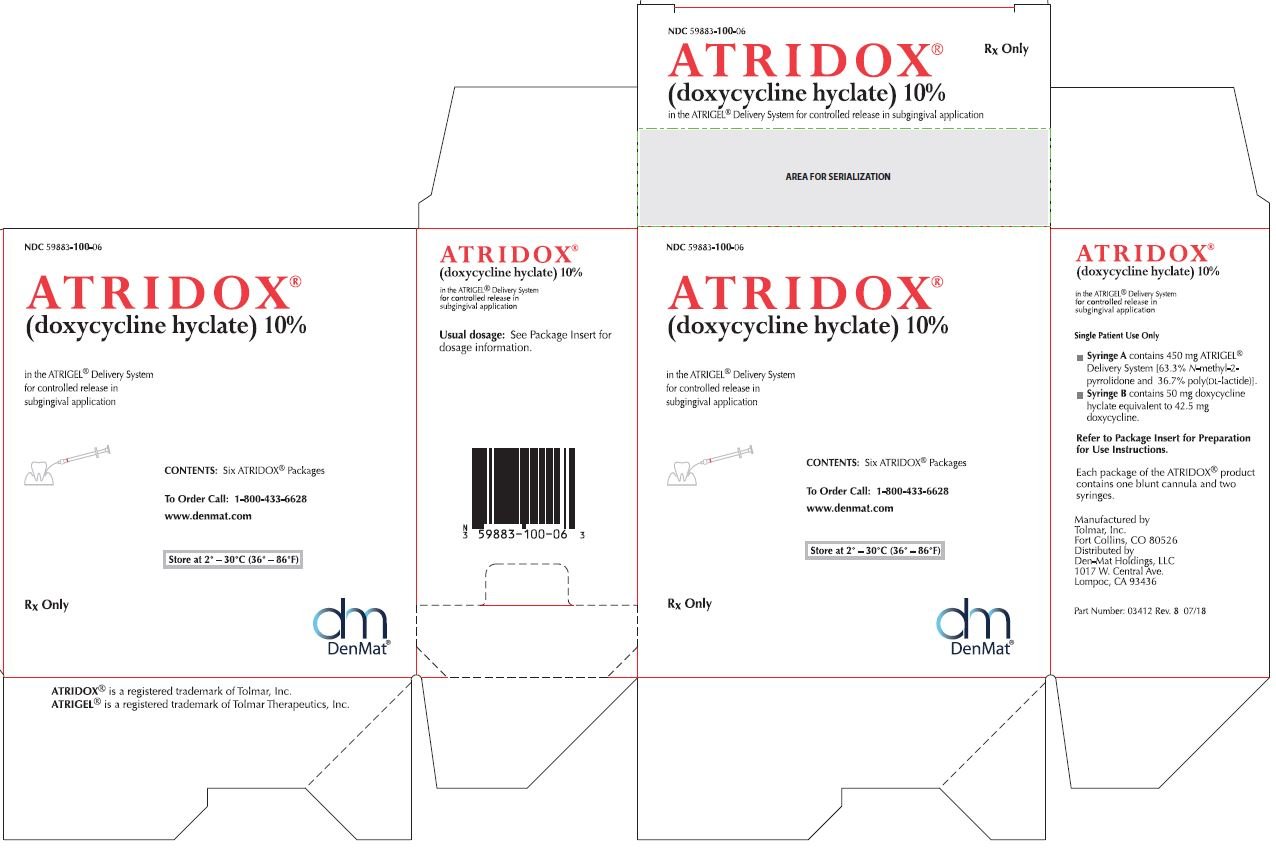 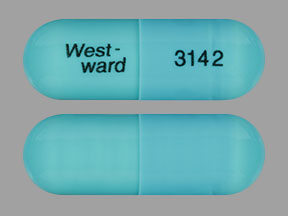