Consider that persistence or reappearance of bacteriuria may occur after nitrofurantoin treatment since the drug is not widely distributed into tissues. (See Selection and Use of Anti-infectives under Cautions.)

Not indicated for treatment of pyelonephritis or perinephric abscesses.

Capsules containing macrocrystals or suspension containing microcrystals: 5–7 mg/kg daily in 4 divided doses given for 7 days or for ≥3 days after urine becomes sterile.

If used for long-term suppressive therapy, manufacturers states 1 mg/kg daily given as a single dose or in 2 equally divided doses may be adequate.

Discontinue nitrofurantoin immediately if an acute, subacute, or chronic pulmonary reaction is suspected. Pulmonary reactions have been cited as a contributing cause of death.

Fever and eosinophilia occur less frequently with subacute pulmonary reactions than with acute reaction. Recovery after subacute reactions may require several months; symptoms may become more severe if not recognized as being related to nitrofurantoin and if the drug is not discontinued.

Chronic pulmonary reactions are rare and can develop insidiously, usually in patients who have received continuous nitrofurantoin treatment for ≥6 months; the severity and degree of resolution depend on duration of nitrofurantoin treatment after symptoms first appear. Symptoms usually involve malaise, dyspnea on exertion, cough, and altered pulmonary function; radiologic and histologic examination may indicate diffuse interstitial pneumonitis and/or fibrosis; fever is rare.

Pulmonary function should be closely monitored in patients receiving long-term nitrofurantoin and the potential benefits of such therapy should be weighed against the potential risks.

Chronic pulmonary reactions may permanently impair pulmonary function (even after discontinuance of nitrofurantoin), especially if such reactions are not recognized early.

Periodically monitor hepatic function during nitrofurantoin treatment since the onset of nitrofurantoin-associated hepatotoxicity may be insidious.

Peripheral neuropathy, which may be severe or irreversible, reported rarely; fatalities have occurred.

Initial symptoms include paresthesia and dysesthesia, usually of the lower extremities, which may progress to muscle weakness and muscle wasting. Severe neuropathy is characterized by edema of interstitial tissues, demyelination of peripheral nerve fibers, and secondary changes in the spinal cord and striated muscles.

Severity of symptoms and rate of recovery are not related to dosage or total amount of drug administered. Resolution varies inversely with severity of muscle weakness.

Hemolytic anemia reported rarely, usually in those with G-6-PD deficiency.

Selection and Use of Anti-infectives

To reduce development of drug-resistant bacteria and maintain effectiveness of nitrofurantoin and other antibacterials, use only for treatment or prevention of infections proven or strongly suspected to be caused by susceptible bacteria.

Consider that many patients treated with nitrofurantoin are predisposed to persistence or reappearance of bacteriuria since the drug is not broadly distributed into tissues. Perform urine culture and susceptibility testing before and after nitrofurantoin treatment.

The lower eradication rates reported with nitrofurantoin should be weighed against the increased risk of systemic toxicity and development of resistance reported with anti-infectives that have broader tissue distribution. If persistence or reappearance of bacteriuria occurs after nitrofurantoin, retreat using an anti-infective with broader tissue distribution.

Not effective in systemic bacterial infections and has no effect on bacteria in blood or tissues outside the urinary tract.

Contraindicated at term (38–42 weeks of gestation), including during labor and delivery and when onset of labor is imminent, since hemolytic anemia could occur in the neonate secondary to immature erythrocyte enzyme systems (glutathione instability).

Dual-release capsules: Safety and efficacy not established in children <12 years of age; contraindicated in infants <1 month of age.

Some information suggests a higher incidence of pulmonary reactions (including fatalities) in geriatric patients; this may be related to the higher proportion of geriatric patients receiving long-term nitrofurantoin treatment. As in younger adults, chronic pulmonary reactions occur most frequently in those receiving the drug for ≥6 months. (See Pulmonary Reactions under Cautions.)

Some information suggests an increased incidence of severe hepatic effects, including fatalities, in geriatric patients. (See Hepatic Effects under Cautions.)

Consider age-related decreases in hepatic, renal, and/or cardiac function and potential for concomitant disease and drug therapy when selecting nitrofurantoin for use in geriatric patients.

Since nitrofurantoin is substantially eliminated by the kidneys; risk of adverse effects may be greater in patients with impaired renal function. Monitor renal function since geriatric patients are more likely to have renal impairment.

Patients with renal impairment are at increased risk for peripheral neuritis. (See Peripheral Neuritis under Cautions.)

If long-term therapy is used, periodically monitor for changes in renal function.

Therapeutic concentrations of nitrofurantoin may not be attained in urine of patients with Clcr <40 mL/minute.

Absorption of macrocrystals is slower than that of microcrystals. The dual-release capsules provide slow release of nitrofurantoin over time.

Food in GI tract increases extent of absorption, presumably by increasing dissolution of the drug. Effect is most apparent with macrocrystals, resulting in a 40% increase in bioavailability if dual-release capsules are given with food.

Only limited distribution into tissues.

Partially metabolized, principally in the liver; small amounts of the drug are reduced to aminofurantoin.

20–44% of a dose eliminated unchanged in urine by glomerular filtration and tubular secretion; about 1% eliminated as aminofurantoin. 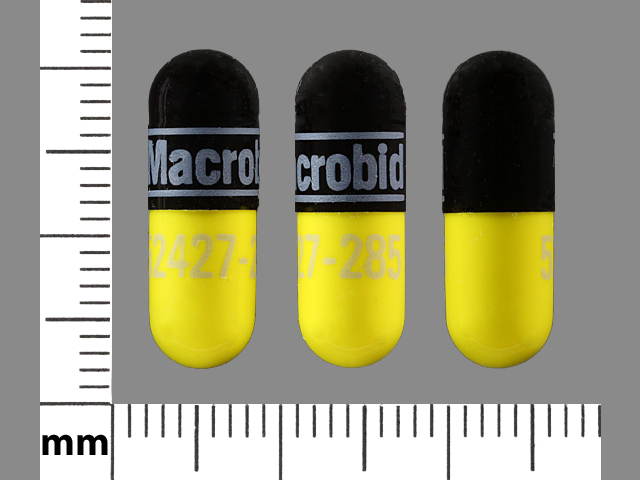