Water-soluble, B complex vitamin. Prescription-only preparations are FDA-labeled for use as antilipemic agents.

Do not use dietary supplement preparations and prescription-only preparations interchangeably. (See Substitution of Different Niacin Preparations under Cautions.)

Adjunct to dietary therapy in patients with a history of MI and hyperlipidemia to reduce the risk of recurrent nonfatal MI.

Adjunct to bile acid sequestrant therapy in patients with CHD and hyperlipidemia to slow progression or promote regression of atherosclerosis.

AHA/ACC cholesterol management guideline states that lifestyle modification is the foundation of cardiovascular risk reduction. If pharmacologic therapy is needed, statins are first-line drugs of choice because of their demonstrated benefits in reducing risk of atherosclerotic cardiovascular disease (ASCVD). Nonstatin drugs may be considered as adjunctive therapy in certain high-risk patients, but other drugs (e.g., ezetimibe) are generally recommended. Although niacin has mild LDL-lowering effects, randomized controlled studies do not support its use as add-on therapy to statins.

Studies have shown that addition of niacin to statin therapy does not provide incremental benefit on cardiovascular morbidity and mortality, but may increase risk of adverse effects.

Adjunctive therapy in the management of severe hypertriglyceridemia in patients at risk of developing pancreatitis (typically those with serum triglyceride concentrations >2000 mg/dL and elevated concentrations of VLDL-cholesterol and fasting chylomicrons) who do not respond adequately to dietary management.

Also may be used in patients with triglyceride concentrations of 1000–2000 mg/dL who have a history of pancreatitis or of recurrent abdominal pain typical of pancreatitis.

Not indicated for use in patients with type I hyperlipoproteinemia who have elevated triglyceride and chylomicron concentrations but normal VLDL-cholesterol concentrations.

In the US, niacin is principally obtained from fish, meat, or poultry, and niacin-enriched or niacin-fortified food (e.g., enriched and whole grain breads and bread products). Conversion of dietary tryptophan to niacin also contributes to niacin intake.

Treatment of pellagra. Niacinamide preferred by some clinicians due to its lack of vasodilating effects.

Commercially available as dietary supplements and as prescription-only preparations. Do not use these preparations interchangeably. (See Substitution of Different Niacin Preparations under Cautions.)

Recommended Dietary Allowance (RDA) is nutrient recommendation from National Academy of Sciences (NAS) for children and adults. The RDA for a given nutrient is the goal for dietary intake in individuals.

Initially, 500 mg once daily at bedtime. If response is inadequate, increase dosage by no more than 500 mg at 4-week intervals until desired effect is observed or maximum daily dosage of 2 g is reached.

Usual maintenance dosage is 1–2 g once daily at bedtime.

In patients previously treated with immediate-release preparations or in those who have discontinued extended-release niacin (Niaspan) therapy for an extended period, titrate dosage as with initial therapy.

Initially, 500 mg once daily at bedtime. If adequate response is not achieved after 4 weeks, increase dosage by no more than 500 mg at 4-week intervals until desired effect is observed.

Usual maintenance dosage is 1–2 g once daily at bedtime.

Titrate Niaspan dosage as with initial therapy in patients previously treated with immediate-release niacin preparations or in those in whom therapy with extended-release niacin (Niaspan) has been discontinued for a prolonged period.

RDA generally expressed in terms of NE. NE is calculated as follows: 1 mg of NE = 1 mg of niacin = 60 mg of tryptophan.

Immediate-release preparations: Maximum 4.5 g daily; manufacturer of Niacor states that maximum of 6 g daily generally should not be exceeded.

Perform liver function tests before initiation of therapy, every 6–12 weeks during the first year, and periodically thereafter (e.g., semiannually).

If increased serum AST/ALT concentrations or manifestations of liver disease occur, perform second liver function evaluation to confirm findings and continue monitoring liver function until abnormalities return to normal. If increases in AST or ALT concentrations of ≥2–3 times the ULN occur or persist, or if associated with nausea, fever, and/or malaise, discontinue therapy. Consider performing liver biopsy if elevations persist after discontinuance of therapy.

Carefully monitor patients for signs and symptoms of muscle pain, tenderness, or weakness, especially early in the course of therapy or during upward titration. Consider periodic monitoring of serum CK and potassium concentrations in patients exhibiting such symptoms; no assurance that such monitoring will prevent occurrence of severe myopathy.

Closely observe patients with (or those at risk of developing) diabetes mellitus.

If used in diabetic or potentially diabetic patients, adjust dosages of niacin and/or antidiabetic agents as appropriate.

Hyperuricemia reported; use with caution in patients predisposed to gout.

Prior to institution of antilipemic therapy, vigorously attempt to control serum cholesterol by appropriate dietary regimens, weight reduction, exercise, and treatment of any underlying disorder that might be the cause of lipid abnormality.

Use with caution in patients with unstable angina, AMI, or CHD, particularly when these patients also are receiving vasoactive drugs such as nitrates, calcium-channel blockers, or adrenergic-blocking agents.

Use with caution and closely observe patients with history of jaundice, hepatobiliary disease, or peptic ulcer disease.

Use with caution in patients with renal or hepatic impairment; lack of data in such patients. (See Specific Populations under Cautions.)

Distributed into milk. Discontinue nursing or the drug.

Safety and efficacy not established in children or adolescents ≤16 years of age.

Extended-release niacin (Niaspan): Safety and efficacy not evaluated in patients <21 years of age.

Extended-release niacin (Niaspan): No overall differences in safety and efficacy relative to younger adults, but increased sensitivity cannot be ruled out.

Use with caution in patients who consume substantial amounts of alcohol and/or have a history of liver disease.

Peak plasma concentrations following oral administration of Niaspan appear to be slightly higher in women than in men, possibly because of differences in metabolism.

Distributed mainly to the liver, kidney, and adipose tissue.

Converted to several metabolites, including nicotinuric acid (NUA), nicotinamide, and nicotinamide adenine dinucleotide (NAD). Nicotinamide does not appear to exert antilipemic effects; the activity of other metabolites on lipoprotein fractions currently unknown.

Niacin and metabolites are rapidly excreted in urine. 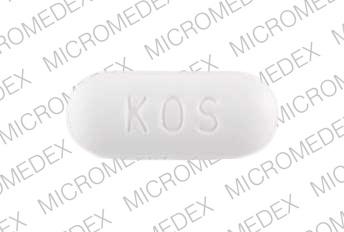