Alternative to imipenem or meropenem for treatment of infections caused by Acinetobacter.

Alternative to doxycycline for postexposure prophylaxis to reduce the incidence or progression of disease following a suspected or confirmed exposure to aerosolized Bacillus anthracis spores (inhalational anthrax). Initial drug of choice for such prophylaxis is ciprofloxacin or doxycycline; doxycycline is the preferred tetracycline because of ease of administration and proven efficacy in monkey studies.

Alternative to doxycycline for treatment of inhalational anthrax when a parenteral regimen is not available (e.g., supply or logistic problems because large numbers of individuals require treatment in a mass casualty setting). A multiple-drug parenteral regimen (ciprofloxacin or doxycycline and 1 or 2 other anti-infectives predicted to be effective) is preferred for treatment of inhalational anthrax that occurs as the result of exposure to anthrax spores in the context of biologic warfare or bioterrorism.

Treatment of brucellosis; tetracyclines (usually doxycycline or tetracycline) considered drugs of choice. Tetracyclines used in conjunction with other anti-infectives (e.g., streptomycin or gentamicin and/or rifampin), especially for severe infections or when there are complications (e.g., endocarditis, meningitis, osteomyelitis).

Treatment of infections caused by Campylobacter. Tetracyclines (usually doxycycline) are alternatives, not drugs of choice for C. jejuni.

Treatment of uncomplicated urethral, endocervical, or rectal infections caused by Chlamydia trachomatis. Doxycycline is the preferred tetracycline for treatment of these infections, including presumptive treatment of chlamydial infections in patients with gonorrhea.

Treatment of trachoma and inclusion conjunctivitis caused by C. trachomatis. Consider that anti-infectives may not eliminate C. trachomatis in all cases of chronic trachoma.

Treatment of lymphogranuloma venereum (genital, inguinal, or anorectal infections) caused by C. trachomatis. Doxycycline is the preferred tetracycline for these infections.

Treatment of psittacosis (ornithosis) caused by C. psittaci. Doxycycline and tetracycline are drugs of choice. For initial treatment of severely ill patients, use IV doxycycline.

Alternative for treatment of infections caused by Clostridium. Tetracyclines are alternatives to metronidazole or penicillin G for adjunctive treatment of C. tetani infections.

Alternative for treatment of uncomplicated gonorrhea (including urethritis) caused by susceptible Neisseria gonorrhoeae. Tetracyclines are considered inadequate therapy and are not recommended by CDC for treatment of gonorrhea.

Treatment of granuloma inguinale (donovanosis) caused by Calymmatobacterium granulomatis. Doxycycline is the tetracycline recommended as drug of choice by CDC.

Alternative for treatment of listeriosis caused by Listeria monocytogenes. Not usually considered a drug of choice or alternative for these infections.

Alternative for use in multiple-drug regimens for treatment of multibacillary leprosy†. WHO recommends minocycline as an alternative for multibacillary leprosy regimens in patients who will not accept or cannot tolerate clofazimine and when rifampin cannot be used because of adverse effects, intercurrent disease (e.g., chronic hepatitis), or infection with rifampin-resistant Mycobacterium leprae.

Component of a single-dose rifampin-based multiple-drug regimen (ROM) for treatment of single-lesion paucibacillary leprosy† (i.e., a single skin lesion with definite loss of sensation but without nerve trunk involvement). A ROM regimen of a single dose of rifampin, single dose of ofloxacin, and single dose of minocycline is recommended by WHO as an acceptable and cost-effective alternative regimen in antileprosy programs that have detected a large number of patients (e.g., more than 1000 annually) with single-lesion paucibacillary leprosy.

Treatment of cutaneous infections caused by M. marinum; a drug of choice.

Elimination of nasopharyngeal carriage of Neisseria meningitidis. CDC and AAP recommend use of rifampin, ceftriaxone, or ciprofloxacin for such carriers and no longer recommend use of minocycline.

Should not be used for treatment of infections caused by N. meningitidis.

Tetracyclines are alternative to co-trimoxazole for treatment of nocardiosis† caused by Nocardia.

Treatment of nongonococcal urethritis (NGU) caused by Ureaplasma urealyticum, C. trachomatis, or Mycoplasma. Doxycycline usually is the tetracycline of choice for NGU.

Consider that some cases of recurrent urethritis following treatment may be caused by tetracycline-resistant U. urealyticum.

Treatment of plague caused by Yersinia pestis. Regimen of choice is streptomycin or gentamicin; alternatives are doxycycline, tetracycline, ciprofloxacin, or chloramphenicol.

Treatment of relapsing fever caused by Borrelia recurrentis. Tetracyclines are drugs of choice.

Treatment of rheumatoid arthritis†. One of several disease-modifying antirheumatic drugs (DMARDs) that can be used when DMARD therapy is appropriate.

Treatment of infections caused by Stenotrophomonas maltophilia†. Alternative to co-trimoxazole.

Treatment of tularemia caused by Francisella tularensis. Tetracyclines (usually doxycycline) considered alternatives to streptomycin (or gentamicin); risk of relapse and primary treatment failure may be higher than with aminoglycosides.

Treatment of cholera caused by Vibrio cholerae. Doxycycline and tetracycline are drugs of choice; used as an adjunct to fluid and electrolyte replacement in moderate to severe disease.

Alternative to penicillin G for treatment of yaws caused by Treponema pertenue.

Administer orally. Has been administered by IV infusion, but parenteral preparations no longer available in US.

Administer capsules, pellet-filled capsules, and tablets with adequate amounts of fluid to reduce the risk of esophageal irritation and ulceration.

The pellet-filled capsules should be swallowed whole.

Available as minocycline hydrochloride; dosage expressed in terms of minocycline.

Children 5–14 years of age: for treatment of single-lesion paucibacillary leprosy† in certain patient groups, WHO recommends a single-dose ROM regimen that includes a single 300-mg dose of rifampin, a single 200-mg dose of ofloxacin, and a single 50-mg dose of minocycline.

Children <5 years of age: WHO recommends that an appropriately adjusted dose of each drug in the single-dose ROM regimen be used.

Uncomplicated Gonorrhea (except Urethritis or Anorectal in Men)

200 mg initially followed by 100 mg every 12 hours given for ≥ 4 days; follow-up cultures should be done within 2–3 days after completion of therapy.

No longer recommended for gonorrhea by CDC or other experts.

No longer recommended for gonorrhea by CDC or other experts.

For treatment of single-lesion paucibacillary leprosy† in certain patient groups, WHO recommends a single-dose ROM regimen that includes a single 600-mg dose of rifampin, a single 400-mg dose of ofloxacin, and a single 100-mg dose of minocycline.

Manufacturers state optimum dosage has not been established, but 100 mg every 12 hours for 6–8 weeks has been effective.

100 mg twice daily for ≥3 months recommended by ATS for treatment of cutaneous infections. A minimum of 4–6 weeks of treatment usually is necessary to determine whether the infection is responding.

200 mg initially followed by 100 mg every 12 hours given for 10–15 days. Close follow-up and laboratory tests are recommended.

Do not exceed usual adult dosage.

Data insufficient to make recommendations regarding dosage adjustment. Dosage should not exceed 200 mg daily in patients with impaired renal function.

Use during tooth development (e.g., pregnancy, children <8 years of age) may cause permanent yellow-gray to brown discoloration of teeth and enamel hypoplasia. Effects are most common following long-term use, but may occur following repeated short-term use.

Use not recommended in children <8 years of age unless other appropriate drugs are ineffective or are contraindicated or unless the benefits in certain indications (e.g., anthrax) outweigh the risks. (See Pediatric Use under Cautions.)

Animal studies indicate possible fetal toxicity (e.g., retardation of skeletal development) and embryotoxicity. If used during pregnancy or if patient becomes pregnant while receiving minocycline, patient should be apprised of the potential hazard to the fetus. (See Pregnancy under Cautions.)

Possiblility of adverse CNS effects (light-headedness, dizziness, vertigo) that may impair ability to drive vehicles or operate hazardous machinery. Vestibular reactions occur more frequently with minocycline than with other tetracyclines. Symptoms may disappear during therapy and usually rapidly disappear when the drug is discontinued.

Tetracyclines have antianabolic effects and may increase BUN.

In patients with impaired renal function, high serum minocycline concentrations may result in azotemia, hyperphosphatemia, and acidosis. Excessive drug accumulation and possible liver toxicity may occur if usual dosage is used in patients with renal impairment. (See Renal Impairment under Dosage and Administration.)

Photosensitivity, manifested by an exaggerated sunburn reaction, reported with tetracyclines.

Photosensitivity reactions may develop within a few minutes to several hours after sun exposure and usually persist 1–2 days after discontinuance of the drug. Most reactions result from accumulation of tetracyclines in skin and are phototoxic in nature; photoallergic reactions may also occur.

Hepatotoxicity has been reported. Use with caution in patients with hepatic dysfunction and in those receiving other hepatotoxic drug.

Selection and Use of Anti-infectives

To reduce development of drug-resistant bacteria and maintain effectiveness of minocycline and other antibacterials, use only for treatment or prevention of infections proven or strongly suspected to be caused by susceptible bacteria.

Because many strains of Acinetobacter, Bacteroides, Enterobacter, E. coli, Klebsiella, Shigella, S. pyogenes (group A β-hemolytic streptococci), S. pneumoniae, enterococci, and α-hemolytic streptococci are resistant to tetracyclines (including minocycline), in vitro susceptibility tests should be performed if the drug is used for treatment of infections caused by these bacteria.

Incision and drainage or other surgical procedures should be performed in conjunction with minocycline therapy when indicated.

AAP states maternal use of tetracyclines usually is compatible with breast-feeding since absorption of the drugs by nursing infants is negligible.

Should not be used in children <8 years of age unless benefits outweigh the risks. (See Dental and Bone Effects under Cautions.)

Insufficient experience in those ≥65 years of age to determine whether they respond differently than younger adults.

Select dosage with caution because of age-related decreases in hepatic, renal, and/or cardiac function and concomitant disease and drug therapy; generally initiate therapy using the low end of the dosing range.

May result in high serum minocycline concentrations and azotemia, hyperphosphatemia, and acidosis.

GI absorption may be reduced up to 20% by food and/or milk; effect not considered clinically important.

Divalent and trivalent cations, including aluminum, calcium, iron, magnesium, and zinc may decrease oral absorption as a result of chelation with the drug.

Only small amounts diffuse into CSF.

May be partially metabolized to ≥6 metabolites.

Patients with impaired renal function: half-life 12–30 hours. Half-life up to 69 hours has been reported. 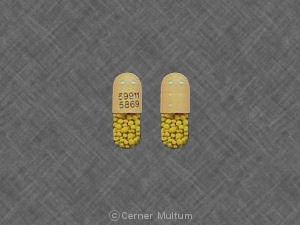