There are 2 alcohol/food/lifestyle interactions with Soliqua (insulin glargine / lixisenatide).

GENERALLY AVOID: Alcohol may cause hypoglycemia or hyperglycemia in patients with diabetes. Hypoglycemia most frequently occurs during acute consumption of alcohol. Even modest amounts can lower blood sugar significantly, especially when the alcohol is ingested on an empty stomach or following exercise. The mechanism involves inhibition of both gluconeogenesis as well as the counter-regulatory response to hypoglycemia. Episodes of hypoglycemia may last for 8 to 12 hours after ethanol ingestion. By contrast, chronic alcohol abuse can cause impaired glucose tolerance and hyperglycemia. Moderate alcohol consumption generally does not affect blood glucose levels in patients with well controlled diabetes. A disulfiram-like reaction (e.g., flushing, headache, and nausea) to alcohol has been reported frequently with the use of chlorpropamide and very rarely with other sulfonylureas.

MANAGEMENT: Patients with diabetes should avoid consuming alcohol if their blood glucose is not well controlled, or if they have hypertriglyceridemia, neuropathy, or pancreatitis. Patients with well controlled diabetes should limit their alcohol intake to one drink daily for women and two drinks daily for men (1 drink = 5 oz wine, 12 oz beer, or 1.5 oz distilled spirits) in conjunction with their normal meal plan. Alcohol should not be consumed on an empty stomach or following exercise.

ADJUST DOSING INTERVAL: Lixisenatide slows gastric emptying, which may impact the absorption of concomitantly administered oral medications. The interaction has been studied with various medications, which demonstrated primarily an effect on the rate rather than the overall extent of absorption.

Warfarin: When warfarin 25 mg was coadministered with repeated dosing of lixisenatide 20 mcg, warfarin Cmax was decreased by 19% and Tmax was delayed by 7 hours, but there were no effects on AUC or International Normalized Ratio (INR). Based on these results, no dose adjustment for warfarin is required; however, closer monitoring of INR may be appropriate following initiation or discontinuation of lixisenatide treatment.

Digoxin: When digoxin 0.25 mg and lixisenatide 20 mcg were coadministered at steady state, digoxin Cmax was decreased by 26% and Tmax was delayed by 1.5 hours, but AUC was not affected. Based on these results, no dose adjustment for digoxin is required.

Ramipril: When ramipril 5 mg and lixisenatide 20 mcg were coadministered for 6 days, ramipril Cmax was decreased by 63% and AUC was increased by 21%, while Cmax and AUC of the active metabolite (ramiprilat) were not affected. The Tmax values of ramipril and ramiprilat were delayed by approximately 2.5 hours. Based on these results, no dose adjustment for ramipril is required.

There are 395 drug interactions with Soliqua (insulin glargine / lixisenatide).

There are 7 disease interactions with Soliqua (insulin glargine / lixisenatide) which include: 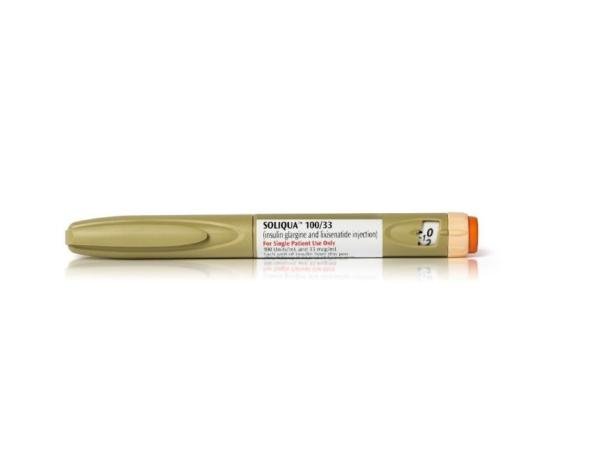