This page contains information on RespiSure for veterinary use.
The information provided typically includes the following:

RESPISURE® contains a chemically inactivated whole cell culture of M. hyopneumoniae, coupled with an oil adjuvant, Amphigen®, to enhance and prolong the immune response without causing detectable tissue damage at the injection site.

RESPISURE® is for vaccination of healthy swine as an aid in the prevention of chronic pneumonia caused by Mycoplasma hyopneumoniae.

2. Primary Vaccination: Administer a single 2-mL dose to pigs at approximately 1 week of age with a booster dose 2 weeks later. Pregnant swine may be safely vaccinated at 6 weeks and 2 weeks prior to farrowing.

Precaution(s): Store at 2°-7°C. Prolonged exposure to higher temperatures may adversely affect potency. Do not freeze. Use entire contents when first opened. Sterilized syringes and needles should be used to administer this vaccine.

Caution(s): As with any vaccine, anaphylaxis may occur after use. Initial antidote of epinephrine is recommended and should be followed with appropriate supportive therapy.

This product has been shown to be efficacious in healthy animals. A protective immune response may not be elicited if animals are incubating an infectious disease, are malnourished or parasitized, are stressed due to shipment or environmental conditions, are otherwise immunocompromised, or the vaccine is not administered in accordance with label directions.

For use in swine only.

Warning(s): Do not vaccinate within 21 days before slaughter.

For veterinary use only.

Discussion: Disease Description: Mycoplasmal pneumonia of swine (MPS), or enzootic pneumonia, is a widespread, chronic disease characterized by coughing, growth retardation, and reduced feed efficiency. The etiologic agent is M. hyopneumoniae; however, the naturally occurring disease often results from a combination of bacterial and mycoplasmal infections.

MPS causes considerable economic loss in all areas where swine are raised. Surveys conducted at various locations throughout the world indicate that lesions typical of those seen with MPS occur in 30% to 80% of slaughter-weight swine. Because mycoplasmal lesions may resolve before hogs reach slaughter weight, the actual incidence may be higher. The prevalence of M. hyopneumoniae infection in chronic swine pneumonia has been reported to range from 25%1 to 93%.2 Research indicates that MPS infections can add up to 30 days to market and increase feed consumption by 0.75 lb per lb of weight gain.

Pigs of all ages are susceptible to MPS, but the disease is most common in growing and finishing swine. Current evidence indicates the M. hyopneumoniae is transmitted by aerosol or direct contact with respiratory tract secretions from infected swine. In some cases, transmission has been attributed to carrier pigs, but other evidence demonstrates that transmission among penmates can occur once a few pigs are infected.3-4 Transmission from sow to pig during lactation is possible.5 Once established, MPS occurs year after year in affected herds, varying in severity with such environmental factors as season, ventilation, and concentration of swine.

Clinical signs of MPS include a chronic nonproductive cough continuing for weeks or months, unthrifty appearance, and retarded growth, even though the appetites of infected swine remain normal. Stunting may occur, resulting in considerable variation in size among affected pigs. Death loss associated with secondary bacterial infection and stress may occur at 4-6 months of age.

M. hyopneumoniae causes a loss of ciliary motility in the bronchial passages. Eventually the cilia are destroyed, resulting in a reduction in natural defense in the upper respiratory tract and increased susceptibility to secondary infection with bacterial agents such as Pasteurella multocida, Haemophilus parasuis, Actinobacillus pleuropneumoniae, and Bordetella bronchiseptica. Swine lungworm and roundworm larvae infections may also increase the severity of MPS.

Trial Data: Safety and Efficacy: Chemical inactivation renders RESPISURE® incapable of causing infectious disease. Necropsy data from in-house clinical trials showed that tissue damage occurred at only 6 (1.87%) of 320 injection sites, and none of the reactions were larger than 1 cm in diameter. The oil-base adjuvant in RESPISURE® does not produce the major tissue damage sometimes associated with conventional oil adjuvants.

Efficacy of RESPISURE® was evaluated in rigorous challenge-of-immunity studies. In repeated studies, RESPISURE® vaccinates had between 72% and 92% less lung involvement caused by homologous and heterologous challenge strains of M. hyopneumoniae than controls. In 2 such tests, vaccinates received 2 intramuscular doses of bacterin, the first at 1 week of age, the second at 3 weeks. One week after the second vaccination, 1 group of vaccinated and nonvaccinated control pigs were challenged intranasally with a homologous strain of M. hyopneumoniae culture, the second group with a heterologous strain. About 3 weeks after challenge, all pigs were necropsied and individual lungs were evaluated for lung damage and gross lesions characteristic of M. hyopneumoniae infection and scored according to a system devised by Goodwin and Whittlestone.6 Results are presented in Figures 1 and 2. 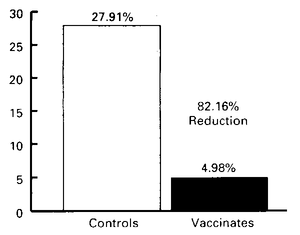 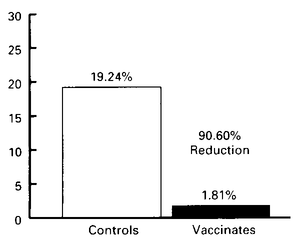 In an independent challenge-of-immunity study conducted at Iowa State University, pigs vaccinated at approximately 6 weeks and again at 8 weeks of age with RESPISURE® showed evidence of less severe M. hyopneumoniae infection (1.9% mean percentage of lung damage) than nonvaccinated control pigs (7.9% mean percentage of lung damage), a 75.91% reduction in lung damage in vaccinates when compared to controls (p = <0.01). Vaccinates also had fewer lung lobes with lesions (6 of 9 vaccinates had lesions in 12 of 63 lobes) than controls (8 of 8 had lesions in 35 of 56 lobes), and the lesions were less severe.

Evaluation of lung tissue and lesions by fluorescent antibody (FA) testing revealed that 7 of 8 control pigs and 3 of 9 vaccinates were positive for M. hyopneumoniae. Based on a system rating the intensity of infection in lung lobes as measured by immunofluorescence from 1-4, the severity of vaccinates' infections (average 0.18) was 71% less than that of controls (average 0.63) (Figure 3). 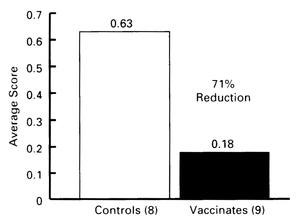 Figure 3. Severity of lung infection as measured by immunofluorescence following challenge with M. hyopneumoniae (0=no infection).