This page contains information on OvuGel for veterinary use.
The information provided typically includes the following:

OvuGel is a thin, clear to slightly hazy gel. Each mL of OvuGel contains 100 µg of triptorelin (as triptorelin acetate) for intravaginal administration. Triptorelin acetate is a synthetic gonadotropin-releasing hormone (GnRH) agonist which acts at the anterior pituitary gland to induce luteinizing hormone (LH) release, which in turn stimulates ovulation. This physiological response allows for the synchronization of time of insemination in sows following weaning to facilitate a single fixedtime artificial insemination.

For the synchronization of the time of insemination in sows following weaning to facilitate a single fixed-time insemination.

OvuGel should be administered intravaginally to sows approximately 96 hours after weaning. The product should be warmed at room temperature for a minimum of 10 minutes prior to use. Insert the delivery tube into the vagina so that the tip rests 1-2 cm (1/2 inch) posterior to the cervix. Use a separate sheath over the delivery tube for each sow treated. Each sow should receive a single 2 mL dose of OvuGel. Sows should be inseminated 22 ± 2 hours following administration of OvuGel using standard artificial insemination techniques. Sows should be exposed to a boar during time of insemination. (See end of package insert for more detailed directions for OvuGel administration).

Use of a bottle mount multi-dose applicator is recommended to ensure accurate dosing.

The use of adequate sperm numbers per insemination and proper semen storage, as recommended by the semen or artificial inseminator catheter suppliers, is recommended.

Illustrated OvuGel Directions for Use

1 Allow the vial of OvuGel to warm to room temperature for a minimum of 10 minutes. 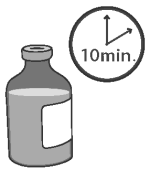 2 Locate the applicator, infusion tube, and protective sheaths to be used. Use of a multi-dose applicator set to deliver 2 mL is recommended.

4 Remove foil tab from the vial top. Invert applicator over upright vial of OvuGel and push vial onto the applicator. 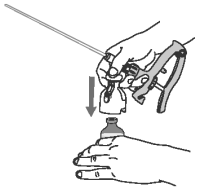 5 Compress the applicator handle fully and then release, allowing applicator chamber to fill with OvuGel.

6 Tilt applicator so that infusion tube is pointed up. 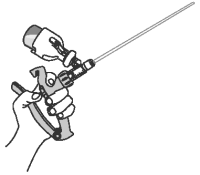 7 Compress and release the applicator handle causing the OvuGel within the chamber to enter the infusion tube and another dose from the vial to refill the chamber. 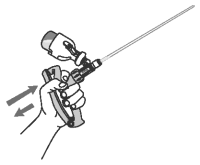 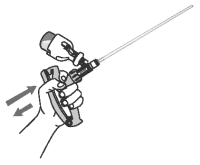 9 Slide the protective sheath over the infusion tube.

10 Gently and slowly insert the covered infusion tube into the vagina at a slight upper angle (to avoid entry into the urethra) until you encounter mild resistance (the cervix) and then withdraw the infusion tube approximately 1-2 cm (1/2 inch).

11 Compress and release the applicator handle to discharge the OvuGel dose and to allow another full dose of OvuGel to enter chamber.

Repeat steps 9 through 12 for each sow receiving OvuGel.

OvuGel should be administered within 1 hour of warming. Unused product maybe stored under refrigeration for up to 28 days from the date the stopper is first punctured. The vial stopper maybe punctured a maximum of three times during that 28 day period.

CAUTIONS: OvuGel should not be used in sows with obvious reproductive tract abnormalities. Not approved for use in gilts as safety and effectiveness have not been evaluated in these animals.

Use may cause minor vaginal inflammation in sows.

No withdrawal period is required when used according to label directions. Avoid direct contact with skin or eyes. Wash hands after handling. Keep Out of Reach of Children.

A total of 1,886 healthy postpartum sows (parities 1 to 7) from five breeding herds were randomly assigned to receive either intravaginal vehicle gel (0 µg triptorelin) or OvuGel.

Sows at each site were blocked for parity and lactation length. Breeds included in this study were Newsham hybrid, PIC Line C-22, PIC Line C-29, PIC maternal line and Large White x Landrace. Sows were inseminated approximately 22 ± 2 hours after treatment. A boar was present in front of sows at time of insemination.

In addition to sows randomized to OvuGel and vehicle gel, outcomes from approximately 200 contemporary non-treated sows from each site were collected. This allowed for comparisons to be made to sows inseminated daily for multiple days based on estrous behaviour, as per industry practice. No statistical comparisons were made between treated and contemporary sows, however differences between groups were evaluated using predetermined acceptable differences.

The analysis of effectiveness outcomes, farrowing and conception rates was conducted on data derived from 485 vehicle treated sows and 490 OvuGel treated sows.

When OvuGel treated sows were compared to contemporary sows, the number of inseminations (doses of semen required) was less (1.0 versus 2.1) and live pigs produced per semen dose was greater (9.0 versus 4.8)

Based on the clinical effectiveness demonstrated in the pivotal effectiveness and safety for in-field use data, OvuGel can be safely and effectively used for the synchronization of the time of insemination in sows following weaning to facilitate a single fixed-time insemination.

STORAGE, HANDLING, AND DISPOSAL: Store at refrigerator between 2°C and 8°C.

OvuGel should be administered within 1 hour of warming; unused portions may be refrigerated immediately after use. The vial stopper may be punctured a maximum of three times. Discard 28 days after the stopper is first punctured.

OvuGel is available in 50 mL vials.

OvuGel® is a trademark of United-AH, LLC and is used by Vetoquinol under license.