This page contains information on Baytril (enrofloxacin) Antibacterial Injectable Solution 2.27% for dogs for veterinary use.
The information provided typically includes the following: 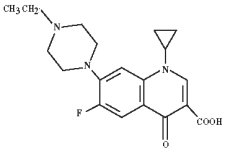 Microbiology: Quinolone carboxylic acid derivatives are classified as DNA gyrase inhibitors. The mechanism of action of these compounds is very complex and not yet fully understood. The site of action is bacterial gyrase, a synthesis promoting enzyme. The effect on Escherichia coli is the inhibition of DNA synthesis through prevention of DNA supercoiling. Among other things, such compounds lead to the cessation of cell respiration and division. They may also interrupt bacterial membrane integrity.1 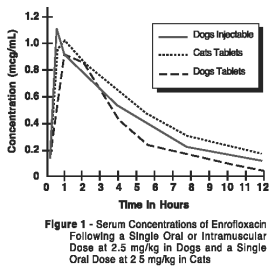 A report of “Susceptible” indicates that the pathogen is likely to be inhibited by generally achievable plasma levels. A report of “intermediate” is a technical buffer and isolates falling into this category should be retested. Alternatively the organism may be successfully treated if the infection is in a body site where drug is physiologically concentrated. A report of “resistant” indicates that the achievable drug concentrations are unlikely to be inhibitory and other therapy should be selected.

Baytril® (brand of enrofloxacin) Injectable Solution is indicated for the management of diseases in dogs associated with bacteria susceptible to enrofloxacin.

No drug-related side effects were reported in 122 clinical cases treated with Baytril® (enrofloxacin) Injectable Solution followed by Baytril® Tablets at 5.0 mg/kg per day.

Enrofloxacin has been administered to dogs at a daily dosage rate of 10 mg/kg concurrently with a wide variety of other health products including anthelmintics (praziquantel, febantel), insecticides (pyrethrins), heartworm preventatives (diethylcarbamazine) and other antibiotics (ampicillin, gentamicin sulfate, penicillin). No incompatibilities with other drugs are known at this time.

Baytril Injectable Solution may be used as the initial dose at 2.5 mg/kg. It should be administered intramuscularly (IM) as a single dose, followed by initiation of Baytril Tablet therapy.

Baytril Injectable Solution may be administered as follows:

*The initial Baytril Injectable administration should be followed 12 hours later by initiation of Baytril Tablet therapy.

The lower limit of the dose range was based on efficacy studies in dogs where enrofloxacin was administered at 2.5 mg/kg twice daily. Target animal safety and toxicology studies were used to establish the upper limit of the dose range and treatment duration. Use within 90 days of first puncture and puncture a maximum of 20 times. Any product remaining after 20 punctures or more than 90 days after initial puncture should be discarded.

Bayer, the Bayer Cross, Baytril and the dog logo are registered trademarks of Bayer

Regulations for product use are established by country. Information contained on this site pertains only to the United States of America, and is not intended to provide adequate information for product use. Before using or dispensing any product, read and carefully observe the label directions.