This page contains information on Banamine transdermal for veterinary use.
The information provided typically includes the following:

For Veterinary Use Only

Wear protective gloves when administering the drug. Apply a single total dose of 3.3 mg flunixin per kg bodyweight (equivalent to 1 mL/15 kg bodyweight) topically in a narrow strip along the dorsal midline from the withers to the tailhead (see Figure 1). Do not rub the solution into the hair or skin after administration. Apply only to dry skin and prevent exposure to wetting for at least 6 hours after application.

The dosing chamber of the bottle is calibrated in kilograms of body weight. To ensure administration of a correct dose, bodyweight should be determined as accurately as possible.

Practice the Administration and Overfill Reduction instructions a few times to become familiar with operating the package before dosing animals. 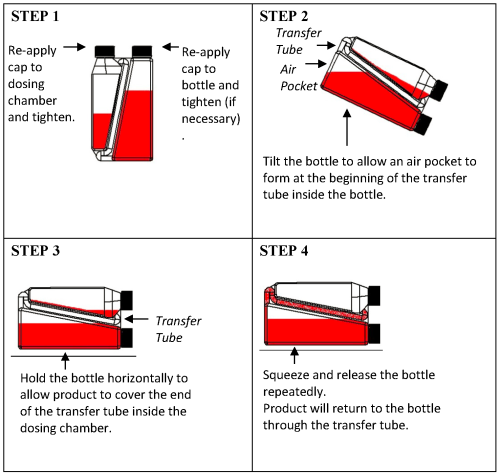 ● Do not use in animals with hepatic disease, renal and cardiovascular impairment, gastro-intestinal ulceration and/or platelet disorders.

● Do not use in animals showing hypersensitivity to flunixin.

Apply only to undamaged skin. Concurrent antimicrobial therapy should be considered in cases of bacterial infection. Do not use in bulls intended for breeding as the reproductive safety has not been evaluated.

Non-Steroidal Anti-Inflammatory Drugs (NSAIDs) are known to have the potential to delay parturition through a tocolytic effect by inhibiting prostaglandins that are important in signalling the initiation of parturition and the product should not be used prior (within 48 hours) to expected parturition. The use of the product in the immediate post-partum period may interfere with uterine involution and expulsion of foetal membranes resulting in retained placentae. Cows should be monitored closely for placental retention and metritis if product is used within 24 hours post-parturition. There may be a delay in the onset of estrus if flunixin is administered during the prostaglandins phase of the estrus cycle. Use in very young or debilitated animals may involve additional risk. Due to the potential for NSAIDs to induce gastro-intestinal ulceration and renal toxicity, concomitant use of this drug with other anti-inflammatory drugs, such as other NSAIDs and corticosteroids should be avoided. Use with caution in dehydrated animals.

● Treated cattle must not be slaughtered for use in food for at least 13 days after the latest treatment with this drug.

● Do not use in lactating dairy cattle.

● Do not use in veal calves. The withdrawal period has not been established in pre-ruminating calves.

● The product has been shown to cause skin irritation and severe and irreversible eye damage. Ingestion of the product may be harmful.

● Do not smoke, eat or drink while handling the product. Wash hands after use.

● Personal protective equipment consisting of impermeable gloves, protective clothing and safety glasses should be worn when using this product.

● In case of accidental ingestion or skin or eye contact, rinse thoroughly with water and seek medical advice as necessary.

● Keep out of reach of children.

Although all adverse reactions are not reported, the following information is based on voluntary post-approval drug experience reporting. It is generally recognized that this results in significant under-reporting. The adverse events listed here reflect reporting and not necessarily causality. Transient swelling, erythema, dandruff, broken/brittle hair, hair thinning, alopecia or thickening of the skin have been commonly reported at the application site and may result from overdose. No specific treatment is generally required. In very rare cases, anaphylactic reactions, which may be serious, may occur and should be treated symptomatically.

Flunixin (as a meglumine salt) is a carboxylic acid, non-steroidal anti-inflammatory drug (NSAID). It demonstrates potent inhibition of the cyclo-oxygenase system (COX) the enzyme converts arachidonic acid to instable cyclic endoperoxides, which are converted to prostaglandins, prostacyclin and tromboxane. Some of these prostanoids, such as prostaglandins are mediators for inflammation, pain and fever. The inhibition of the synthesis of such components is responsible for the therapeutic effects of flunixin meglumine.

After dermal application, flunixin is moderately absorbed through the skin of cattle (bioavailability about 44%). In cattle (except for calves), volumes of distribution are generally low due to the high degree (approximately 99%) of plasma protein binding. The apparent plasma elimination half-life following pour-on administration is about 7.8h for the 5 mg/kg dose. In cattle, elimination occurs primarily through biliary excretion.

Flunixin transdermal solution was administered topically to crossbred male and female cattle (4/sex/group) at 0X (saline control), 1X, 3X or 5X the proposed clinical dose of 1 mL/15 kg once daily along the dorsal midline area, for three consecutive days. All treated cattle had microscopic skin changes at the site of application consistent with inflammation and necrosis of the superficial layers. Transient intermittent signs of twisting and rubbing on the fence were seen in 1 animal in the 3X group and 3 animals in the 5X which lasted up to 60 minutes after dosing. Increased abomasal erosive lesions and positive fecal occult blood were observed in 3 animals in the 5X group.

Effectiveness for the reduction of pyrexia associated with BRD was demonstrated in a negative (placebo) controlled clinical field study conducted in the USA in above freezing temperatures.

The environmental temperatures ranged from 5.6° to 23°C during the study. Predominantly Angus ruminating steers bulls and heifers aged 6 to 10 months, weighing 101.6 to 281 kg were enrolled in the study. The calves had signs of respiratory disease and a rectal temperature ≥ 40.3°C. Treatments of 1 mL/15 kg BW either saline placebo or BANAMINE transdermal solution (3.3 mg/kg BW) were administered topically along the dorsal midline. The effectiveness of flunixin transdermal solution was evaluated by comparing the proportion of calves that had a 1.1°C or more decrease in body temperature 6 hours after treatment in the flunixin-treated group versus the control group. Animals were observed for systemic and local adverse reactions. The percentage of animals that had a 1.1°C or more reduction in body temperature was statistically significantly higher (p<0.0001) in the BANAMINE transdermal solution treated group (70/120, 58.3%) compared to the placebo-treated group (7/115, 6.1%). There were no treatment related adverse reactions within six hours following dosing.

The results of an effectiveness study under cold environmental conditions were compared to results from a similar study conducted in warmer conditions in ruminating calves treated with BANAMINE transdermal solution or placebo. Both studies were conducted at the same site in Nebraska. One study was conducted in April when the ambient temperature was above freezing and the other study was conducted in January when the environmental temperature ranged from -22.7° to 2.8°C. Beef calves with clinical symptoms of BRD and a body temperature of 40.3°C or greater received a treatment of 1 mL/15 kg BW saline placebo or BANAMINE transdermal solution (3.3 mg/kg BW) administered topically along the dorsal midline. The effectiveness of BANAMINE transdermal solution for the reduction of pyrexia associated with BRD under cold environmental conditions was evaluated by comparing the proportion of animals with decreased body temperature 6 hours following treatment in the flunixin-treated group to the control group in both weather conditions. Animals were observed for systemic and local adverse reactions. The percentage of animals classified as a treatment success was statistically significantly higher (p<0.0002) in the BANAMINE transdermal solution-treated group (19/25, 76%) compared to the placebo-treated group (4/25, 16%) in January weather conditions. In April weather conditions, 20/22, 90.9% in the BANAMINE transdermal-treated group had at least a 1.1°C reduction in body temperature compared to 4/22, 18.2% in the placebo group (p=0.0001). The analysis showed that there was not a statistically significant effect of time of year or environmental conditions (p=0.2790) between the studies. There were no treatment related adverse reactions within six hours following dosing.

In each study, cattle were challenged by subcutaneous injection of a culture of Fusobacterium necrophorum into the interdigital space of the right front foot using a method that was validated to induce pain representative of foot rot. Cattle were enrolled when they demonstrated signs of pain associated with foot rot based on lameness, interdigital lesion, and interdigital swelling criteria. Pressure mat gait parameters maximum total force (kgf) and contact area (cm2) were also measured at enrollment. A total of 30 cattle at each site were administered either flunixin transdermal solution (3.3 mg/kg BW) or an equivalent volume of dyed saline as a pour-on once on Day 0. Six hours after treatment, lameness scores and pressure mat gait parameters maximum total force and contact area were measured.

Store at or below 30°C. Use within 6 months once opened.

BANAMINE transdermal solution is available in a plastic bottle equipped with a graduate dosing chamber in sizes 100 mL, 250 mL and 1000 mL.