Note: This document contains side effect information about niacin / simvastatin. Some of the dosage forms listed on this page may not apply to the brand name Simcor.

Niacin-simvastatin treatment was discontinued by 14% of patients in a controlled clinical trial due to an adverse event. Flushing episodes (including warmth, redness, itching, and/or tingling) were the most common side effects reported by patients using niacin-simvastatin.

Musculoskeletal side effects have included back pain (3.2%), myopathy, and rhabdomyolysis have been associated with simvastatin therapy. The risk of myopathy/rhabdomyolysis is dose related and is increased by concomitant use of simvastatin with potent Inhibitors of CYP450 3A4, as well as cyclosporine or danazol, particularly with higher doses of simvastatin.[Ref]

Liver function tests should be performed before treatment begins, every 12 weeks for the first 6 months, and periodically thereafter (e.g., at approximately 6-month intervals). Patients who develop increased transaminase levels should be monitored with a second liver function evaluation to confirm the finding and be followed thereafter with frequent liver function tests until the abnormality returns to normal. If a persistent increase in transaminase levels is seen (e.g., three times the upper limit of normal), or if transaminase elevations are associated with symptoms of nausea, fever, and/or malaise, withdrawal of niacin-simvastatin therapy is recommended.[Ref]

Dermatologic side effects including flushing (59%) and pruritus (3.2%) were reported in patients receiving the combination niacin-simvastatin product. Flushing episodes have also been associated with niacin monotherapy (in up to 88% of patients).[Ref]

Other side effects including headache (4.5%) and back pain (3.2%) have been associated with the combination niacin-simvastatin product.[Ref]

Respiratory side effects including upper respiratory infection and rhinitis have been associated with simvastatin and niacin, respectively.[Ref]

Metabolic side effects including increased serum glucose levels have been associated with niacin therapy. Therefore, glucose levels should be closely monitored in diabetic or potentially diabetic patients particularly during the first few months of use.[Ref]

Psychiatric side effects reported postmarketing have included cognitive impairment (e.g., memory loss, forgetfulness, amnesia, memory impairment, confusion) associated with statin use. These cognitive issues have been reported for all statins. The reports are generally nonserious, and reversible upon statin discontinuation, with variable times to symptom onset (1 day to years) and symptom resolution (median of 3 weeks). 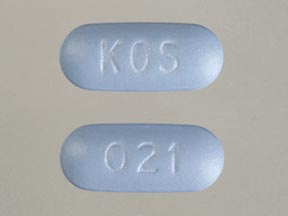