The Tylox brand name has been discontinued in the U.S. If generic versions of this product have been approved by the FDA, there may be generic equivalents available.

Each capsule of Tylox® (oxycodone and acetaminophen capsules USP) contains:

The oxycodone component is 14-hydroxy-dihydrocodeinone, a white, odorless crystalline powder having a saline, bitter taste. It is derived from the opium alkaloid thebaine, and may be represented by the following structural formula: 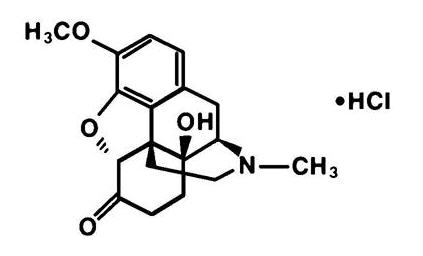 The principal ingredient, oxycodone, is a semi-synthetic narcotic analgesic with multiple actions qualitatively similar to those of morphine; the most prominent of these involve the central nervous system and organs composed of smooth muscle. The principal actions of therapeutic value of the oxycodone in Tylox® (oxycodone and acetaminophen capsules) are analgesia and sedation.

Oxycodone is similar to codeine and methadone in that it retains at least one-half of its analgesic activity when administered orally.

Indications and Usage for Tylox

Tylox® (oxycodone and acetaminophen capsules) are indicated for the relief of moderate to moderately severe pain.

Tylox® (oxycodone and acetaminophen capsules) should not be administered to patients who are hypersensitive to any component.

There have been post-marketing reports of hypersensitivity and anaphylaxis associated with the use of acetaminophen. Clinical signs included swelling of the face, mouth, and throat, respiratory distress, urticaria, rash, pruritus, and vomiting. There were infrequent reports of life-threatening anaphylaxis requiring emergency medical attention. Instruct patients to discontinue Tylox® immediately and seek medical care if they experience these symptoms. Do not prescribe Tylox® for patients with acetaminophen allergy.

Tylox® contains sodium metabisulfite, a sulfite that may cause allergic-type reactions including anaphylactic symptoms and life-threatening or less severe asthmatic episodes in certain susceptible people. The overall prevalence of sulfite sensitivity in the general population is unknown and probably low. Sulfite sensitivity is seen more frequently in asthmatic than in nonasthmatic people.

Oxycodone can produce drug dependence of the morphine type and, therefore, has the potential for being abused. Psychic dependence, physical dependence, and tolerance may develop upon repeated administration of Tylox® (oxycodone and acetaminophen capsules), and it should be prescribed and administered with the same degree of caution appropriate to the use of other oral narcotic-containing medications. Like other narcotic-containing medications, Tylox® is subject to the Federal Control Substances Act (Schedule II).

The respiratory depressant effects of narcotics and their capacity to elevate cerebrospinal fluid pressure may be markedly exaggerated in the presence of head injury, other intracranial lesions or a preexisting increase in intracranial pressure. Furthermore, narcotics produce adverse reactions which may obscure the clinical course of patients with head injuries.

The administration of Tylox®(oxycodone and acetaminophen capsules) or other narcotics may obscure the diagnosis or clinical course in patients with acute abdominal conditions.

Tylox® should be given with caution to certain patients such as the elderly or debilitated, and those with severe impairment of hepatic or renal function, hypothyroidism, Addison's disease, and prostatic hypertrophy or urethral stricture.

Patients receiving other narcotic analgesics, general anesthetics, phenothiazines, other tranquilizers, sedative-hypnotics, or other CNS depressants (including alcohol) concomitantly with Tylox® may exhibit an additive CNS depression. When such combined therapy is contemplated, the dose of one or both agents should be reduced.

The concurrent use of anticholinergics with narcotics may produce paralytic ileus.

Animal reproductive studies have not been conducted with Tylox®. It is also not known whether Tylox® can cause fetal harm when administered to a pregnant woman or can affect reproductive capacity. Tylox® should not be given to a pregnant woman, unless in the judgment of the physician, the potential benefits outweigh the possible hazards.

Use of narcotics during pregnancy may produce physical dependence in the neonate.

As with all narcotics, administration of Tylox® to the mother shortly before delivery may result in some degree of respiratory depression in the newborn and the mother, especially if higher doses are used.

The most frequently observed adverse reactions include lightheadedness, dizziness, sedation, nausea, and vomiting. These effects seem to be more prominent in ambulatory than in non-ambulatory patients, and some of these adverse reactions may be alleviated if the patient lies down.

Other adverse reactions include allergic reactions, euphoria, dysphoria, constipation, skin rash, and pruritus. At higher doses, oxycodone has most of the disadvantages of morphine including respiratory depression.

Oxycodone can produce drug dependence and has the potential for being abused (see WARNINGS).

Following an acute overdosage, toxicity may result from the oxycodone or the acetaminophen.

In acetaminophen overdosage: dose-dependent potentially fatal hepatic necrosis is the most serious adverse effect. Renal tubular necrosis, hypoglycemic coma, and coagulation defects may also occur. Early symptoms following a potentially hepatotoxic overdose may include: nausea, vomiting, diaphoresis, and general malaise. Clinical and laboratory evidence of hepatic toxicity may not be apparent until 48 to 72 hours post-ingestion.

A single or multiple drug overdose with oxycodone and acetaminophen is a potentially lethal polydrug overdose, and consultation with a regional poison control center is recommended. Immediate treatment includes support of cardiorespiratory function and measures to reduce drug absorption. Oxygen, intravenous fluids, vasopressors, and other supportive measures should be employed as indicated. Assisted or controlled ventilation should also be considered.

Primary attention should be given to the reestablishment of adequate respiratory exchange through provision of a patent airway and the institution of assisted or controlled ventilation. The narcotic antagonist naloxone hydrochloride is a specific antidote against respiratory depression which may result from overdosage or unusual sensitivity to narcotics, including oxycodone. Since the duration of action of oxycodone may exceed that of the antagonist, the patient should be kept under continued surveillance, and repeated doses of the antagonist should be administered as needed to maintain adequate respiration. A narcotic antagonist should not be administered in the absence of clinically significant respiratory or cardiovascular depression.

Vigorous supportive therapy is required in severe intoxication. Procedures to limit the continuing absorption of the drug must be readily performed since the hepatic injury is dose-dependent and occurs early in the course of intoxication.

Dosage should be adjusted according to the severity of the pain and the response of the patient. However, it should be kept in mind that tolerance to oxycodone can develop with continued use and that the incidence of untoward effects is dose related. This product is inappropriate even in high doses for severe or intractable pain.

Tylox® (oxycodone and acetaminophen capsules) are given orally. The usual adult dosage is one Tylox® capsule every 6 hours as needed for pain.

UNIT DOSE PACK FOR INSTITUTIONAL USE 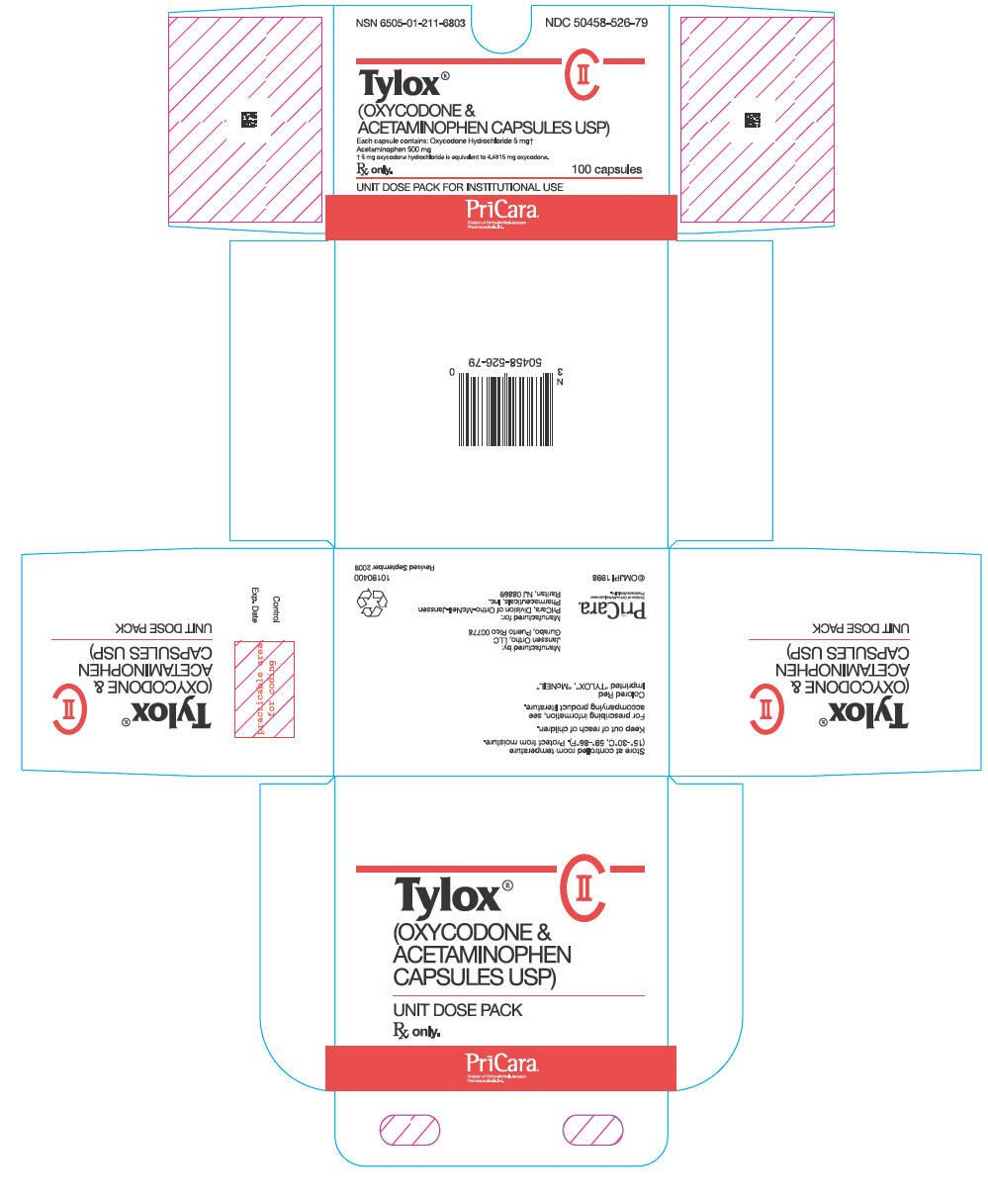 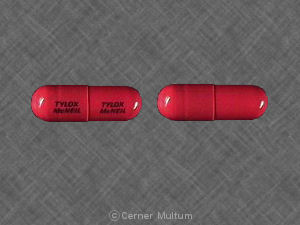