Diazoxide has the following structural formula: 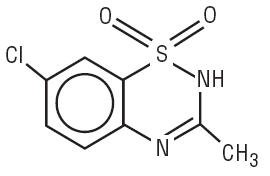 Diazoxide is 7-chloro-3-methyl-2H-1,2,4-benzothiadiazine 1,1-dioxide with the empirical formula C8H7ClN2O2S and the molecular weight 230.7. It is a white powder practically insoluble to sparingly soluble in water.

Diazoxide administered orally produces a prompt dose-related increase in blood glucose level, due primarily to an inhibition of insulin release from the pancreas, and also to an extrapancreatic effect.

The hyperglycemic effect begins within an hour and generally lasts no more than eight hours in the presence of normal renal function.

Proglycem decreases the excretion of sodium and water, resulting in fluid retention which may be clinically significant.

Proglycem-induced hyperglycemia is reversed by the administration of insulin or tolbutamide. The inhibition of insulin release by Proglycem is antagonized by alpha-adrenergic blocking agents.

Indications and Usage for Proglycem

Proglycem (ORAL DIAZOXIDE) is useful in the management of hypoglycemia due to hyperinsulinism associated with the following conditions:

Proglycem should be used only after a diagnosis of hypoglycemia due to one of the above conditions has been definitely established. When other specific medical therapy or surgical management either has been unsuccessful or is not feasible, treatment with Proglycem should be considered.

The use of Proglycem for functional hypoglycemia is contraindicated. The drug should not be used in patients hypersensitive to diazoxide or to other thiazides unless the potential benefits outweigh the possible risks.

The antidiuretic property of diazoxide may lead to significant fluid retention, which in patients with compromised cardiac reserve, may precipitate congestive heart failure. The fluid retention will respond to conventional therapy with diuretics.

It should be noted that concomitantly administered thiazides may potentiate the hyperglycemic and hyperuricemic actions of diazoxide (See DRUG INTERACTIONS and ANIMAL PHARMACOLOGY AND/OR TOXICOLOGY).

Ketoacidosis and nonketotic hyperosmolar coma have been reported in patients treated with recommended doses of Proglycem usually during intercurrent illness. Prompt recognition and treatment are essential (See OVERDOSAGE), and prolonged surveillance following the acute episode is necessary because of the long drug half-life of approximately 30 hours. The occurrence of these serious events may be reduced by careful education of patients regarding the need for monitoring the urine for sugar and ketones and for prompt reporting of abnormal findings and unusual symptoms to the physician. Transient cataracts occurred in association with hyperosmolar coma in an infant, and subsided on correction of the hyper-osmolarity. Cataracts have been observed in several animals receiving daily doses of intravenous or oral diazoxide.

The development of abnormal facial features in four children treated chronically (>4 years) with Proglycem for hypoglycemia hyperinsulinism in the same clinic has been reported.

Pulmonary Hypertension in Neonates and Infants

Treatment with Proglycem should be initiated under close clinical supervision, with careful monitoring of blood glucose and clinical response until the patient's condition has stabilized. This usually requires several days. If not effective in two to three weeks, the drug should be discontinued.

Prolonged treatment requires regular monitoring of the urine for sugar and ketones, especially under stress conditions, with prompt reporting of any abnormalities to the physician. Additionally, blood sugar levels should be monitored periodically by the physician to determine the need for dose adjustment.

The effects of diazoxide on the hematopoietic system and the level of serum uric acid should be kept in mind; the latter should be considered particularly in patients with hyperuricemia or a history of gout.

In some patients, higher blood levels have been observed with the oral suspension than with the capsule formulation of Proglycem. Dosage should be adjusted as necessary in individual patients if changed from one formulation to the other.

Since the plasma half-life of diazoxide is prolonged in patients with impaired renal function, a reduced dosage should be considered. Serum electrolyte levels should also be evaluated for such patients.

Because of the protein binding, administration of Proglycem with coumarin or its derivatives may require reduction in the dosage of the anticoagulant, although there has been no reported evidence of excessive anticoagulant effect. In addition, Proglycem may possibly displace bilirubin from albumin; this should be kept in mind particularly when treating newborns with increased bilirubinemia.

Pulmonary hypertension has been reported in neonates and young infants treated with diazoxide. (see WARNINGS)

Since diazoxide is highly bound to serum proteins, it may displace other substances which are also bound to protein, such as bilirubin or coumarin and its derivatives, resulting in higher blood levels of these substances. Concomitant administration of oral diazoxide and diphenylhydantoin may result in a loss of seizure control. These potential interactions must be considered when administering Proglycem Capsules or Suspension.

The concomitant administration of thiazides or other commonly used diuretics may potentiate the hyperglycemic and hyperuricemic effects of diazoxide.

Reproduction studies using the oral preparation in rats have revealed increased fetal resorptions and delayed parturition, as well as fetal skeletal anomalies; evidence of skeletal and cardiac teratogenic effects in rabbits has been noted with intravenous administration. The drug has also been demonstrated to cross the placental barrier in animals and to cause degeneration of the fetal pancreatic beta cells (See ANIMAL PHARMACOLOGY AND/OR TOXICOLOGY). Since there are no adequate data on fetal effects of this drug when given to pregnant women, safety in pregnancy has not been established. When the use of Proglycem is considered, the indications should be limited to those specified above for adults (See INDICATIONS AND USAGE), and the potential benefits to the mother must be weighed against possible harmful effects to the fetus.

Diazoxide crosses the placental barrier and appears in cord blood. When given to the mother prior to delivery of the infant, the drug may produce fetal or neonatal hyperbilirubinemia, thrombocytopenia, altered carbohydrate metabolism, and possibly other side effects that have occurred in adults.

Alopecia and hypertrichosis lanuginosa have occurred in infants whose mothers received oral diazoxide during the last 19 to 60 days of pregnancy.

Since intravenous administration of the drug during labor may cause cessation of uterine contractions, and administration of oxytocic agents may be required to reinstate labor, caution is advised in administering Proglycem at that time.

Information is not available concerning the passage of diazoxide in breast milk. Because many drugs are excreted in human milk and because of the potential for adverse reactions from diazoxide in nursing infants, a decision should be made whether to discontinue nursing or to discontinue the drug, taking into account the importance of the drug to the mother.

Sodium and fluid retention is most common in young infants and in adults and may precipitate congestive heart failure in patients with compromised cardiac reserve. It usually responds to diuretic therapy (See DRUG INTERACTIONS).

Diabetic ketoacidosis and hyperosmolar nonketotic coma may develop very rapidly. Conventional therapy with insulin and restoration of fluid and electrolyte balance is usually effective if instituted promptly. Prolonged surveillance is essential in view of the long half-life of Proglycem (See OVERDOSAGE).

Hirsutism of the lanugo type, mainly on the forehead, back and limbs, occurs most commonly in children and women and may be cosmetically unacceptable. It subsides on discontinuation of the drug.

Hyperglycemia or glycosuria may require reduction in dosage in order to avoid progression to ketoacidosis or hyperosmolar coma.

Other adverse reactions which have been observed are:

Cardiovascular: hypotension occurs occasionally, which may be augmented by thiazide diuretics given concurrently. A few cases of transient hypertension, for which no explanation is apparent, have been noted. Chest pain has been reported rarely. Pulmonary hypertension has been reported in neonates and young infants (see WARNINGS).

An overdosage of Proglycem causes marked hyperglycemia which may be associated with ketoacidosis. It will respond to prompt insulin administration and restoration of fluid and electrolyte balance. Because of the drug's long half-life (approximately 30 hours), the symptoms of overdosage require prolonged surveillance for periods up to seven days until the blood sugar level stabilizes within the normal range. One investigator reported successful lowering of diazoxide blood levels by peritoneal dialysis in one patient and by hemodialysis in another.

Patients should be under close clinical observation when treatment with Proglycem is initiated. The clinical response and blood glucose level should be carefully monitored until the patient's condition has stabilized satisfactory; in most instances, this may be accomplished in several days. If administration of Proglycem is not effective after two or three weeks, the drug should be discontinued.

The dosage of Proglycem must be individualized based on the severity of the hypoglycemic condition and the blood glucose level and clinical response of the patient. The dosage should be adjusted until the desired clinical and laboratory effects are produced with the least amount of the drug. Special care should be taken to assure accuracy of dosage in infants and young children.

The usual daily dosage is 3 to 8 mg/kg, divided into two or three equal doses every 8 or 12 hours. In certain instances, patients with refractory hypoglycemia may require higher dosages. Ordinarily, an appropriate starting dosage is 3 mg/kg/day, divided into three equal doses every 8 hours. Thus an average adult would receive a starting dosage of approximately 200 mg daily.

Oral diazoxide in the mouse, rat, rabbit, dog, pig, and monkey produces a rapid and transient rise in blood glucose levels. In dogs, increased blood glucose is accompanied by increased free fatty acids, lactate, and pyruvate in the serum. In mice, a marked decrease in liver glycogen and an increase in the blood urea nitrogen level occur.

In subacute oral toxicity studies, diazoxide at 400 mg/kg in the rat produced growth retardation, edema, increases in liver and kidney weights, and adrenal hypertrophy. Daily dosages up to 1080 mg/kg for three months produced hyperglycemia, an increase in liver weight and an increase in mortality. In dogs given oral diazoxide at approximately 40 mg/kg/day for one month, no biologically significant gross or microscopic abnormalities were observed. Cataracts, attributed to markedly disturbed carbohydrate metabolism, have been observed in a few dogs given repeated daily doses of oral or intravenous diazoxide. The lenticular changes resembled those which occur experimentally in animals with increased blood glucose levels. In chronic toxicity studies, rats given a daily dose of 200 mg/kg diazoxide for 52 weeks had a decrease in weight gain and an increase in heart, liver, adrenal and thyroid weights. Mortality in drug-treated and control groups was not different. Dogs treated with diazoxide at dosages of 50, 100, and 200 mg/kg/day for 82 weeks had higher blood glucose levels than controls. Mild bone marrow stimulation and increased pancreas weights were evident in the drug-treated dogs; several developed inguinal hernias, one had a testicular seminoma, and another had a mass near the penis. Two females had inguinal mammary swellings. The etiology of these changes was not established. There was no difference in mortality between drug-treated and control groups. In a second chronic oral toxicity study, dogs given milled diazoxide at 50, 100, and 200 mg/kg/day had anorexia and severe weight loss, causing death in a few. Hematologic, biochemical, and histologic examination did not indicate any cause of death other than inanition. After one year of treatment, there is no evidence of herniation or tissue swelling in any of the dogs.

When diazoxide was administered at high dosages concomitantly with either chlorothiazide to rats or trichlormethiazide to dogs, increased toxicity was observed. In rats, the combination was nephrotoxic; epithelial hyperplasia was observed in the collecting tubules. In dogs, a diabetic syndrome was produced which resulted in ketosis and death. Neither of the drugs given alone produced these effects.

Although the data are inconclusive, reproduction and teratology studies in several species of animals indicate that diazoxide, when administered during the critical period of embryo formation, may interfere with normal fetal development, possibly through altered glucose metabolism. Parturition was occasionally prolonged in animals treated at term. Intravenous administration of diazoxide to pregnant sheep, goats, and swine produced in the fetus an appreciable increase in blood glucose level and degeneration of the beta cells of the Islets of Langerhans. The reversibility of these effects was not studied. 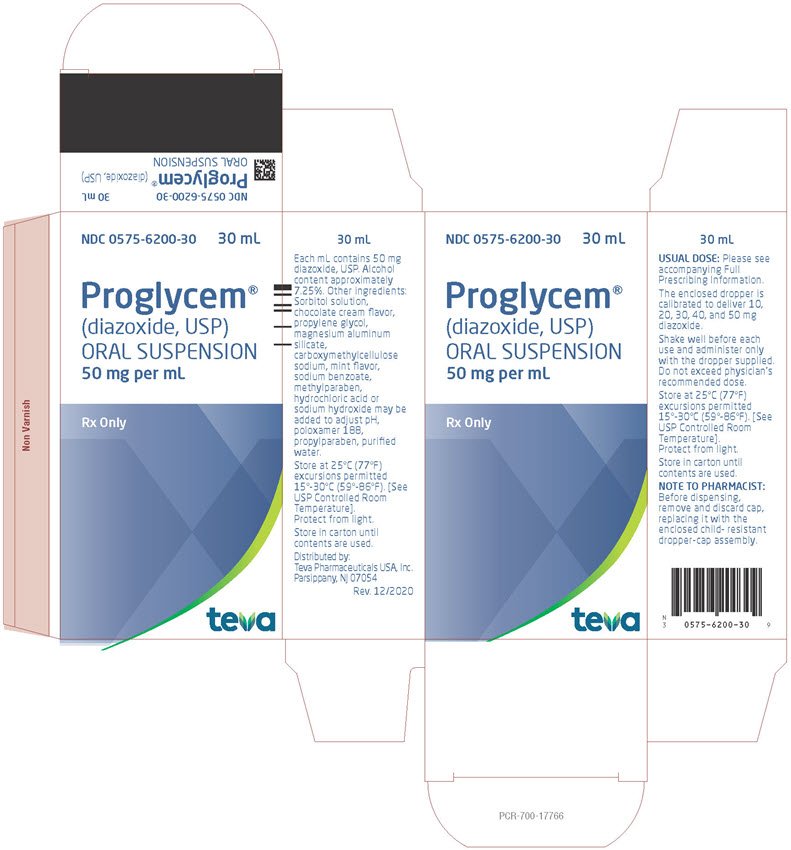