For Intravenous Use in
Hospitalized Patients Only

The Hyperstat brand name has been discontinued in the U.S. If generic versions of this product have been approved by the FDA, there may be generic equivalents available.

Diazoxide has the following structural formula: 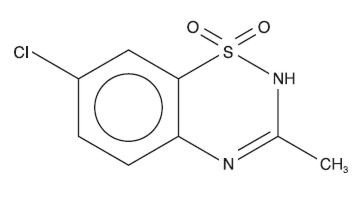 Diazoxide is 7-chloro-3-methyl-2H-1,2,4-benzothiadiazine 1,1-dioxide, with the empirical formula C8H7ClN2O2S, and the molecular weight 230.7. It is a white crystalline powder practically insoluble to sparingly soluble in water.

Transient hyperglycemia occurs in the majority of patients treated with Hyperstat, but usually requires treatment only in patients with diabetes mellitus. It will respond to the usual management measures, including insulin.

Blood glucose levels should be monitored, especially in patients with diabetes and in those requiring multiple injections of diazoxide. Cataracts have been observed in a few animals receiving repeated daily doses of intravenous diazoxide.

Since diazoxide causes sodium retention, repeated injections may precipitate edema and congestive heart failure. Increased volume of extracellular fluid may be a cause of treatment failure in nonresponsive patients. The increase in fluid volume characteristically responds to diuretic agents if adequate renal function exists. Concurrently administered thiazide diuretics may be expected to potentiate the antihypertensive and hyperuricemic actions of diazoxide. (See Drug Interactions.)

Diazoxide is extensively bound to serum protein (>90%). The plasma half-life is 28 ± 8.3 hours; however, the duration of its antihypertensive effect is variable, generally lasting less than 12 hours.

Indications and Usage for Hyperstat

Hyperstat I.V. Injection is indicated for short-term use in the emergency reduction of blood pressure in severe, nonmalignant and malignant hypertension in hospitalized adults; and in acute severe hypertension in hospitalized children, when prompt and urgent decrease of diastolic pressure is required. Treatment with orally effective antihypertensive agents should not be instituted until blood pressure has stabilized. The use of Hyperstat I.V. Injection for longer than 10 days is not recommended.

Hyperstat I.V. Injection is ineffective against hypertension due to pheochromocytoma.

Caution must be observed when reducing severely elevated blood pressure. Diazoxide should only be administered utilizing the new 150-mg minibolus dosage. The use of a 300-mg intravenous dose of diazoxide has been associated with angina and with myocardial and cerebral infarction. One instance of optic nerve infarction was reported when a 100-mmHg reduction in diastolic pressure occurred over ten minutes following a single 300-mg bolus. In one prospective trial conducted in patients with severe hypertension and coexistent coronary artery disease, a 50% incidence of ischemic changes in the electrocardiogram was observed following single 300-mg bolus injections of diazoxide. The desired blood pressure lowering should therefore be achieved over as long a period of time as is compatible with the patient's status. At least several hours and preferably 1 or 2 days is tentatively recommended.

Improved safety with equal efficacy can be achieved by administering Hyperstat I.V. Injection as a minibolus dose (1 to 3 mg/kg every 5 to 15 minutes up to a maximum of 150 mg in a single injection) until a diastolic blood pressure below 100 mmHg is achieved. Hyperstat I.V. Injection should not be administered in a bolus dose of 300 mg since this mode of administration is less predictable and less controllable than the minibolus dosage. If hypotension severe enough to require therapy results from the reduction in blood pressure, it will usually respond to the Trendelenberg maneuver. If necessary, sympathomimetic agents such as dopamine or norepinephrine may be administered.

Special attention is required for patients with diabetes mellitus and those in whom retention of salt and water may present serious problems.

Intravenous administration of diazoxide in dogs has induced subendocardial necrosis and necrosis of papillary muscles. These lesions, which are also produced by other vasodilator drugs (ie, hydralazine, minoxidil) and by catecholamines, are presumed to be related to anoxia resulting from a combination of reflex tachycardia and decreased perfusion.

Hyperstat (diazoxide) I.V. Injection is an effective antihypertensive agent requiring close monitoring of the patient's blood pressure at frequent intervals. Its administration may occasionally cause hypotension requiring treatment with sympathomimetic drugs. Therefore, Hyperstat I.V. Injection should be used primarily in the hospital or where adequate facilities exist to treat such untoward responses.

Hyperstat I.V. Injection should be administered only into a peripheral vein. Because the alkalinity of the solution is irritating to tissue, avoid extravascular injection or leakage. Subcutaneous administration has produced inflammation and pain without subsequent necrosis. If leakage into subcutaneous tissue occurs, the area should be treated with warm compresses and rest.

Hyperstat I.V. Injection should be used with care in patients who have impaired cerebral or cardiac circulation, that is, patients in whom abrupt reduction in blood pressure might be detrimental or those in whom mild tachycardia or decreased blood perfusion may be deleterious (see WARNINGS). Prolonged hypotension should be avoided so as not to aggravate preexisting renal failure.

During and immediately following intravenous injection of Hyperstat I.V. Injection, the patient should remain supine.

Diagnostic laboratory tests necessary to establish the patient's condition and status should be carried out prior to treatment with Hyperstat I.V. Injection. During and following treatment with Hyperstat I.V. Injection, laboratory tests to monitor the effects of treatment with this drug and the patient's condition should be done. Among the tests (not necessarily inclusive) are: hematologic (hematocrit, hemoglobin, white blood cell and platelet counts); metabolic (glucose, uric acid, total protein, albumin); electrolyte (sodium, potassium) and osmolality; renal function (creatinine, urine-protein); electrocardiogram.

Diazoxide is highly bound to serum protein. It can be expected to displace other substances which are also bound to protein, such as bilirubin or coumarin and its derivatives; resulting in higher blood levels of these substances.

An undesirable hypotension may result when diazoxide is administered to patients who have received other antihypertensive medication within 6 hours.

Hyperstat I.V. Injection should not be administered within 6 hours of the administration of: hydralazine, reserpine, alphaprodine, methyldopa, beta-blockers, prazosin, minoxidil, the nitrites and other papaverine-like compounds.

Concomitant administration with thiazides or other commonly used diuretics may be expected to potentiate the hyperuricemic and antihypertensive effects of diazoxide.

Diazoxide has been shown to reduce fetal and/or pup survival; and to reduce fetal growth in rats, rabbits, and dogs at daily doses of 30, 21, or 10 mg/kg, respectively. In rats treated at term, diazoxide, at doses of 10 mg/kg and above, prolonged parturition.

The safety of Hyperstat I.V. Injection in pregnancy has not been established.

Diazoxide crosses the placental barrier and appears in cord blood. When given to the mother prior to delivery, the drug may produce fetal or neonatal hyperbilirubinemia, thrombocytopenia, altered carbohydrate metabolism, and possibly other side effects that have occurred in adults.

Information is not available concerning the passage of Hyperstat in breast milk. Because many drugs are excreted in human milk and because of the potential for adverse reactions in nursing infants from diazoxide, a decision should be made whether to discontinue nursing or to discontinue the drug, taking into account the importance of the drug to the mother.

It is reasonable to speculate that the currently recommended minibolus dosing regimen, which has replaced the 300-mg bolus dose in clinical practice, will result in adverse effects which are of similar character but of lesser frequency and severity.

Central Nervous System: cerebral ischemia, usually transient but occasionally leading to infarction and manifested by unconsciousness, convulsions, paralysis, confusion, or focal neurological deficit such as numbness of the hands; vasodilative phenomena, such as orthostatic hypotension, sweating, flushing, and generalized or localized sensations of warmth; various transient neurological findings secondary to alteration in regional blood flow to brain, such as headache (sometimes throbbing), dizziness, lightheadedness, sleepiness (also reported as lethargy, somnolence or drowsiness), euphoria or "funny feeling," ringing in the ears and momentary hearing loss, and weakness of short duration; apprehension or anxiety.

Other: hyperglycemia in diabetic patients, especially after repeated injections; hyperosmolar coma in an infant; transient hyperglycemia in nondiabetic patients; transient retention of nitrogenous wastes; various respiratory finding secondary to the relaxation of smooth muscle, such as dyspnea, cough and choking sensation; warmth or pain along the injected vein; cellulitis without sloughing and/or phlebitis at the injection site of extravasation; back pain and increased nocturia; hypersensitivity reactions, such as rash, leukopenia and fever; papilledema induced by plasma volume expansion secondary to the administration of diazoxide reported in a patient who had received eleven injections (300 mg/dose) over a 22-day period; malaise and blurred vision; transient cataract in an infant; hirsutism, and decreased libido.

Overdosage of Hyperstat I.V. Injection may cause undesirable hypotension. Usually, this can be controlled with the Trendelenberg maneuver. If necessary, sympathomimetic agents, such as dopamine or norepinephrine, may be administered. Failure of blood pressure to rise in response to such agents suggests that the hypotension may have been caused by something other than diazoxide. Excessive hyperglycemia resulting from overdosage will respond to conventional therapy of hyperglycemia.

Hyperstat I.V. Injection is administered undiluted and rapidly by intravenous injections of 1 to 3 mg/kg up to a maximum of 150 mg in a single injection. This dose may be repeated at intervals of 5 to 15 minutes until a satisfactory reduction in blood pressure (diastolic pressure below 100 mmHg) has been achieved.

With the patient recumbent, the calculated dose of Hyperstat I.V. Injection is administered intravenously in 30 seconds or less.

Hyperstat I.V. Injection should only be given into a peripheral vein. Do not administer it intramuscularly, subcutaneously, or into body cavities. Avoid extravasation of the drug into subcutaneous tissues.

Following the use of Hyperstat I.V. Injection, the blood pressure should be monitored closely until it has stabilized. Thereafter, measurements taken hourly during the balance of the effect should indicate any unusual response. A further decrease in blood pressure 30 minutes or more after injection should be investigated for causes other than the action of Hyperstat I.V. Injection. It is preferable that the patient remain supine for at least 1 hour after injection. In ambulatory patients, the blood pressure should also be measured with the patient standing before surveillance is ended.

Repeated administration of Hyperstat I.V. Injection at intervals of 4 to 24 hours usually will maintain the blood pressure below pretreatment levels until a regimen of oral antihypertensive medication can be instituted. The interval between injections may be adjusted by the duration of the response to each injection. It is usually unnecessary to continue treatment with Hyperstat I.V. Injection for more than 4 to 5 days.

Since repeated administration of Hyperstat I.V. Injection can lead to sodium and water retention, administration of a diuretic may be necessary both for maximal blood pressure reduction and to avoid congestive heart failure. (See CLINICAL PHARMACOLOGY.)