Periochip® (chlorhexidine gluconate) is a small, orange-brown, rectangular chip (rounded at one end) for insertion into periodontal pockets. Each Periochip weighs approximately 6.9 mg and contains 2.5 mg of chlorhexidine gluconate in a biodegradable matrix of hydrolyzed gelatin (cross-linked with glutaraldehyde). Periochip also contains glycerin and purified water.

Chlorhexidine gluconate is active against a broad spectrum of microbes. The chlorhexidine molecule, due to its positive charge, reacts with the microbial cell surface, destroys the integrity of the cell membrane, penetrates into the cell, precipitates the cytoplasm, and the cell dies. Studies with Periochip showed reductions in the numbers of the putative periodontopathic organisms Porphyromonas (Bacteroides) gingivalis, Prevotella (Bacteroides) intermedia, Bacteroides forsythus, and Campylobacter rectus (Wolinella recta) after placement of the chip. No overgrowth of opportunistic organisms or other adverse changes in the oral microbial ecosystem were noted. The relationship of the microbial findings to clinical outcome has not been established.

Periochip releases chlorhexidine in vitro in a biphasic manner, initially releasing approximately 40% of the chlorhexidine within the first 24 hours and then releasing the remaining chlorhexidine in an almost linear fashion for 7-10 days. This enzymatic release rate assay is an experimental collagenase assay that differs from the Regulatory Specification's Agar Release Rate Assay. This release profile may be explained as an initial burst effect, dependent on diffusion of chlorhexidine from the chip, followed by a further release of chlorhexidine as a result of enzymatic degradation.

In an in vivo study of 18 evaluable adult patients, there were no detectable plasma or urine levels of chlorhexidine following the insertion of 4 Periochips under clinical conditions. The concentration of chlorhexidine released from the Periochip was determined in the gingival crevicular fluid (GCF) of these same subjects. In these subjects, a highly variable biphasic release profile for chlorhexidine was demonstrated, with GCF levels 4 hours after chip insertion (mean: 1444 ± 783 μg/mL), followed by a second peak at 72 hours (mean: 1902 ± 1073 μg/mL). In a second study involving the insertion of 1 Periochip under clinical conditions, the mean GCF level of chlorhexidine peaked at 1088 ± 678 μg/mL at 4 hours. The mean GCF levels then declined in a highly erratic fashion to levels of 482 ± 447 μg/mL at 72 hours without producing a true second peak.

The results of these studies confirm a high degree of intersubject variability in chlorhexidine release from the Periochip matrix in vivo that was not seen in vitro. Due to the nature and clinical use of the Periochip dosage form, dose proportionality was not and would not be expected to be demonstrated between the two studies.

In two double-blind, randomized, controlled clinical trials, 447 adult patients with periodontitis were entered who had at least 4 pockets with probing depth of 5-8 mm that bled on probing. Patients studied were in good general health. Diabetics were excluded from the studies. Periochip was not studied in acutely abscessed periodontal pockets. Patients were free of supragingival calculus prior to baseline. In these two studies, the effects of scaling and root planing (SRP) alone, and SRP followed by Periochip treatment, were compared. All patients received full mouth SRP at baseline. If the pocket depth remained ≥ 5 mm at 3 and/or 6 months after initial treatment, another chip was placed into the pocket. Teeth treated with Periochip were found to have significantly reduced probing pocket depth (PD) compared with those treated with SRP alone at 9 months after initial treatment, as shown in Table 1.

Periochip treatment resulted in a greater percentage of pockets and patients that showed an improvement in PD of 2 mm or more compared with SRP alone at 9 months, as shown in Table 2. The differences in improvement were statistically significant when analyzed on a per patient basis (p < 0.005). Periochip treatment maintained probing attachment level (PAL) compared with baseline or with SRP alone at 9 months. The effects of Periochip on bleeding upon probing have not been established. In the two studies, there were no significant changes in plaque development or gingivitis. Smokers and non-smokers were enrolled in these studies; although non-smokers using Periochip demonstrated significant improvement in PD, smokers demonstrated a trend towards improvement that did not reach statistical significance. This finding is consistent with the consensus that smoking is a risk factor in periodontal diseases.

In the two clinical studies above and an additional study (619 patients), the adverse effects of tooth staining or altered taste perception were not reported after the use of Periochip.

Periochip should not be used in any patient who has a known sensitivity to chlorhexidine.

Anaphylaxis, as well as serious allergic reactions, have been reported during postmarketing use with dental products containing chlorhexidine.

The use of Periochip in an acutely abscessed periodontal pocket has not been studied and therefore is not recommended. Although rare, infectious events including abscesses and cellulitis, which have been reported after scaling and root planing alone, have also been reported with the adjunctive placement of the Periochip post scaling and root planing. Management of patients with periodontal disease should include consideration of potentially contributing medical disorders, such as cancer, diabetes, and immunocompromised status.

Patients should avoid dental floss at the site of Periochip insertion for 10 days after placement, because flossing might dislodge the chip. All other oral hygiene may be continued as usual. No restrictions regarding dietary habits are needed. Dislodging of the Periochip is uncommon; however, patients should be instructed to notify the dentist promptly if the Periochip dislodges. Patients should also be advised that, although some mild to moderate sensitivity is normal during the first week after placement of Periochip, they should notify the dentist promptly if pain, swelling, or other problems occur.

Chlorhexidine gluconate has not been evaluated for carcinogenic potential in connection with the Periochip. No evidence that chlorhexidine gluconate has potential to cause genetic toxicity was obtained in a battery of mutagenicity studies, including (in vitro) an Ames assay, a chromosome aberration assay in CHO cells, and (in vivo) a micronucleus assay conducted in mice.

Teratogenic Effects: Animal reproduction studies have not been conducted in relation to Periochip, because animal models that would permit use of a clinically relevant route of administration are not available. Chlorhexidine gluconate did not induce harm to the fetus when administered to rats by gavage at dosages up to 68.5 mg/kg/day. While chlorhexidine is known to be very poorly absorbed from the GI tract, it may be absorbed following placement within a periodontal pocket. Therefore, it is unclear whether these data are relevant to clinical use of Periochip. In clinical studies, placement of four chips within periodontal pockets resulted in plasma concentrations of chlorhexidine that were at or below the limit of detection. However, it is not known whether Periochip can cause fetal harm when administered to a pregnant woman or can affect reproductive capacity. Periochip should be used in a pregnant woman only if clearly needed.

Pediatric Use: The safety and effectiveness of Periochip in pediatric patients have not been established.

Geriatric Use: Although subjects aged 65 years and over were included in clinical studies of Periochip, there were not sufficient numbers of these subjects to determine whether they respond differently from younger subjects. Other reported clinical experience has not identified differences in responses between the elderly and younger patients. Overall differences in safety or effectiveness have not been identified between the elderly and younger patients.

The most frequently observed adverse events in the two pivotal clinical trials were toothache, upper respiratory tract infection, and headache. Toothache was the only adverse reaction that was significantly higher (p = 0.042) in the Periochip group when compared to placebo. Most oral pain or sensitivity occurred within the first week of the initial chip placement following SRP procedures, was mild to moderate in nature, and spontaneously resolved within days. These reactions were observed less frequently with subsequent chip placement at 3 and 6 months.

Table 3 lists adverse events, occurring in ≥ 1% of 225 patients that received Periochip, pooled from the two pivotal clinical trials without regard to causality. Gingival bleeding was the only dental adverse event occurring at a rate of ≤ 1% in both groups.

One Periochip is inserted into a periodontal pocket with probing pocket depth (PD) 5 mm or greater. Up to 8 chips may be inserted in a single visit. Treatment is recommended to be administered once every three months in pockets with PD remaining 5 mm or greater.

The periodontal pocket should be isolated and the surrounding area dried prior to chip insertion. The Periochip should be grasped using forceps (such that the rounded end points away from the forceps) and inserted into the periodontal pocket to its maximum depth. If necessary, the Periochip can be further maneuvered into position using the tips of the forceps or a flat instrument. The Periochip does not need to be removed since it biodegrades completely.

Periochip (chlorhexidine gluconate) 2.5 mg is supplied as a small, orange-brown, rectangular chip (rounded at one end), in cartons of 20 chips (NDC 64239-101-20) . Each chip is individually packed in a separate compartment of an aluminum blister pack. 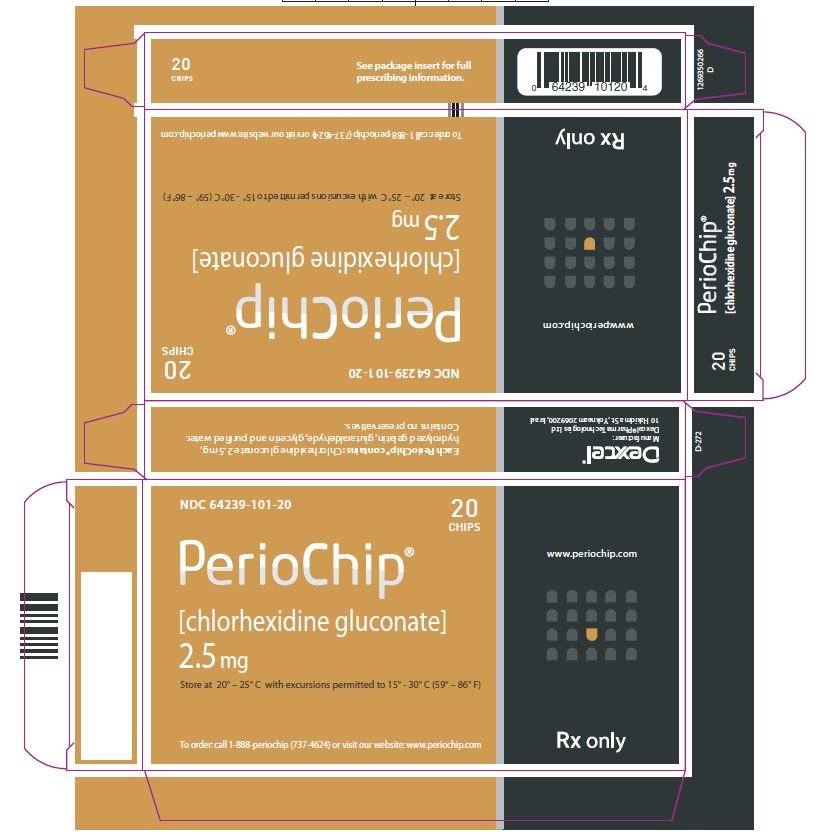