Peridex (Chlorhexidine Guconate 0.12%) Oral Rinse provides antimircobial activity during oral rinsing. The clinical significance of Peridex oral rinse's antimicrobial activities is not clear. Microbiological sampling of plaque has shown a general reduction of counts of certain assayed bacteria, both aerobic and anaerobic, ranging from 54-97% through six months use. Use of Peridex in a six month clinical study did not result in any significant changes in bacteria resistance, overgrowth of potentially opportunistic organisms or other adverse changes in the oral microbial ecosystem. Three months after Peridex use was discontinued, the number of bacteria in plaque had returned to baseline levels and resistance of plaque bacteria to chlorhexidine gluconate was equal to that at baseline.

Indications and Usage for Peridex

Peridex is indicated for use between dental visits as part of a professional program for the treatment of gingivitis as characterized by redness and swelling of the gingivae, including gingival bleeding upon probing. Peridex has not been tested among patients with acute necrotizing ulcerative gingivitis (ANUG). For patients having coexisting gingivitis and periodontitis, see PRECAUTIONS.

Peridex should not be used by persons who are known to be hypersensitive to chlorhexidine gluconate or other formula ingredients.

Anaphylaxis, as well as serious allergic reactions, have been reported during postmarketing use with dental products containing chlorhexidine. SEE CONTRAINDICATIONS.

Reproduction studies have been performed in rats and rabbits at chlorhexidine gluconate doses up to 300mg/kg/day and 40mg/kg/day, respectively, and have not revealed evidence of harm to fetus. However, adequate and well-controlled studies in pregnant women have not been done. Because animal reproduction studies are not always predictive of human response, this drug should be used during pregnancy only if clearly needed.

It is not known whether this drug is excreted in human milk. Because many drugs are excreted in human milk, caution should be exercised when Peridex is administered to nursing women. In parturition and lactation studies with rats, no evidence of impaired parturition or of toxic effects to suckling pups was observed when chlorhexidine gluconate was administered to dams at doses that were over 100 times greater than that which would result from a person's ingesting 30ml (2 capfuls) of Peridex per day.

Clinical effectiveness and safety of Peridex have not been established in children under the age of 18.

In a drinking water study in rats, carcinogenic effects were not observed at doses up to 38mg/kg/day. Mutagenic effects were not observed in two mammalian in vivo mutagenesis studies with chlorhexidine gluconate. The highest doses of chlorhexidine used in a mouse dominant-lethal assay and a hamster cytogenetics test were 1000mg/kg/day and 250mg/kg/day, respectively. No evidence of impaired fertility was observed in rats at doses up to 100mg/kg/day.

The most common side effects associated with chlorhexidine gluconate oral rinses are: 1) an increase in staining of teeth and other oral surfaces; 2) an increase in calculus formation; and 3) an alteration in taste perception, see WARNINGS and PRECAUTIONS. Oral irritation and local allergy-type symptoms have been spontaneously reported as side effects associated with use of chlorhexidine gluconate rinse. The following oral mucosal side effects were reported during placebo-controlled adult clinical trials: aphthous ulcer, grossly obvious gingivitis, trauma, ulceration, erythema, desquamation, coated tongue, keratinization, geographic tongue, mucocele, and short frenum. Each occurred at a frequency of less than 1.0%. Among post marketing reports, the most frequently reported oral mucosal symptoms associated with Peridex are stomatitis, gingivitis, glossitis, ulcer, dry mouth, hypesthesia, glossal edema, and paresthesia. Minor irritation and superficial desquamation of the oral mucosa have been noted in patients using Peridex. There have been cases of parotid gland swelling and inflammation of the salivary glands (sialadenitis) reported in patients using Peridex.

Peridex therapy should be initiated directly following a dental prophylaxis. Patients using Peridex should be reevaluated and given a thorough prophylaxis at intervals no longer than six months. Recommended use is twice daily oral rinsing for 30 seconds, morning and evening after toothbrushing. Usual dosage is 15ml (marked in cap) of undiluted Peridex. Patients should be instructed to not rinse with water or other mouthwashes, brush teeth or eat immediately after using Peridex. Peridex is not intended for ingestion and should be expectorated after rinsing.

How is Peridex Supplied

WHAT TO EXPECT WHEN USING Peridex (CHLORHEXIDINE GLUCONATE 0.12%) ORAL RINSE

Your dentist has prescribed Peridex™ (Chlorhexidine Gluconate 0.12%) Oral Rinse to treat your gingivitis, to help reduce the redness and swelling of your gums, and also to help you control any gum bleeding. Use Peridex regularly, as directed by your dentist, in addition to daily brushing. Spit out after use. Peridex should not be swallowed.

If you develop allergic symptoms such as skin rash, itch, generalized swelling, breathing difficulties, light headedness, rapid heart rate, upset stomach or diarrhea, seek medical attention immediately. Peridex should not be used by persons who have a sensitivity to it or its components.

Peridex may cause some tooth discoloration or increase in tartar (calculus) formation, particularly in areas where stain and tartar usually form. It is important to see your dentist for removal of any stain or tartar at least every six months or more frequently if your dentist advises.

If you have any questions or comments about Peridex, contact your dentist, pharmacist or 3M ESPE Dental Products toll free at 1-800-634-2249.

Call your healthcare provider for medical advice about side effects. You may report side effects to FDA at 1-800-FDA-1088.

DIRECTIONS FOR USE: Swish in mouth undiluted for 30 seconds, then spit out. Use after breakfast and before bedtime, or use as prescribed. NOTE: To minimize medicinal taste, do not rinse with water immediately after use.

To open, press down while turning cap. To reseal, turn cap past "clicks" until tightly locked.

DIRECTIONS FOR USE: Swish 1 tablespoon (15 ml) in mouth undiluted for 30 seconds, then spit out. Use after breakfast and before bedtime. Or, use as prescribed.

To open, press down while turning cap. To reseal, turn cap past "clicks" until tightly locked.

DIRECTIONS FOR USE: Fill cap to the "fill line" (15 ml). Swish in mouth undiluted for 30 seconds, then spit out. Use after breakfast and before bedtime, Or, use as prescribed

Dispense in bottle as provided or in amber glass 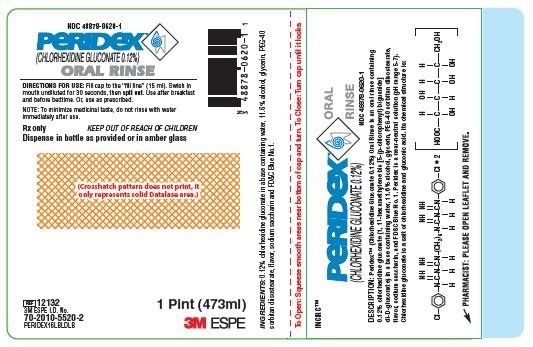 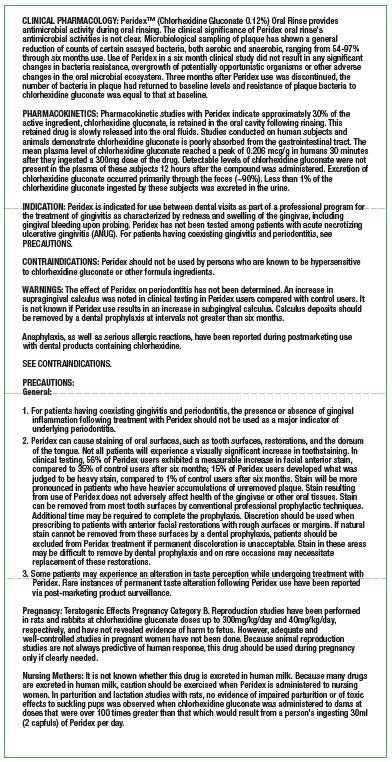 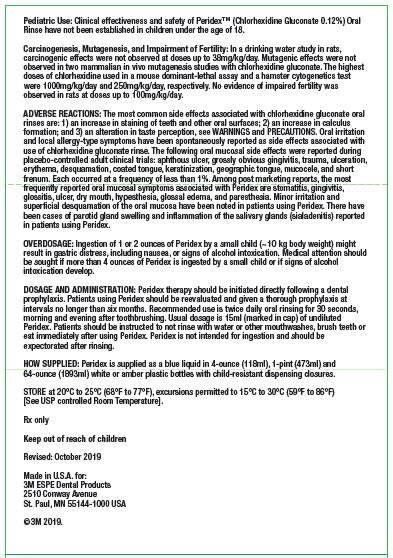 DIRECTIONS FOR USE: Remove bottle cap and replace with dispensing pump. Turn pump counterclockwise to release pump spring mechanism and seal. Dispense two complete pumps of the oral rinse, an appropriate deliverable volume of 15 ml, into a suitable patient cup. Swish in mouth undiluted for 30 seconds, then spit out. 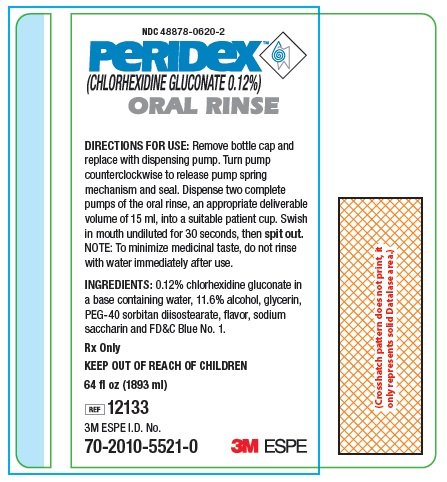 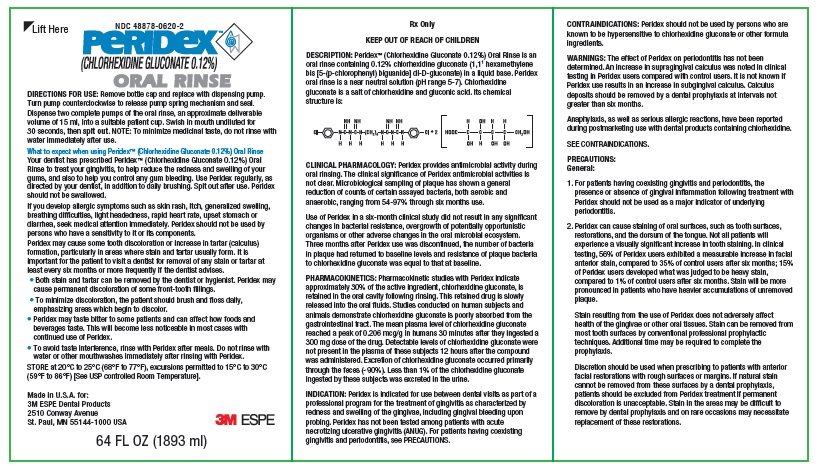 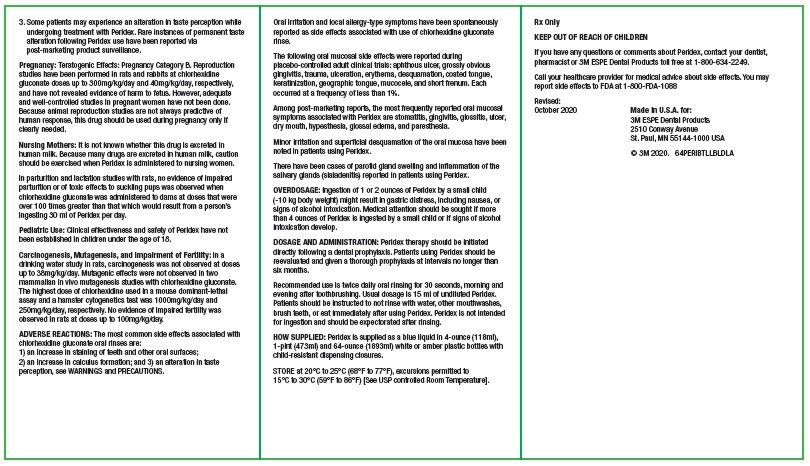