OTOVEL should be discontinued at the first appearance of a skin rash or any other sign of hypersensitivity. Serious and occasionally fatal hypersensitivity (anaphylactic) reactions, some following the first dose, have been reported in patients receiving systemic quinolones. Some reactions were accompanied by cardiovascular collapse, loss of consciousness, angioedema (including laryngeal, pharyngeal or facial edema), airway obstruction, dyspnea, urticaria and itching. Serious acute hypersensitivity reactions may require immediate emergency treatment.

Prolonged use of OTOVEL may result in overgrowth of non-susceptible bacteria and fungi. If the infection is not improved after one week of treatment, cultures should be obtained to guide further treatment. If such infections occur, discontinue use and institute alternative therapy.

If otorrhea persists after a full course of therapy, or if two or more episodes of otorrhea occur within 6 months, further evaluation is recommended to exclude an underlying condition such as cholesteatoma, foreign body, or a tumor.

The most common adverse reactions that occurred in 1 or more patients are as follows:

The following adverse reactions have been identified during postapproval use of ciprofloxacin and fluocinolone acetonide otic solution, 0.3% / 0.025% outside the US. Because these reactions are reported voluntarily from a population of uncertain size, it is not always possible to reliably estimate their frequency or establish a causal relationship to drug exposure.

OTOVEL is negligibly absorbed following otic administration and maternal use is not expected to result in fetal exposure to ciprofloxacin and fluocinolone acetonide [see Clinical Pharmacology (12.3)].

OTOVEL is negligibly absorbed by the mother following otic administration and breastfeeding is not expected to result in exposure of the infant to ciprofloxacin and fluocinolone acetonide [ see Clinical Pharmacology (12.3)].

OTOVEL has been studied in patients as young as 6 months in adequate and well-controlled clinical trials. No major differences in safety and effectiveness have been observed between adult and pediatric patients [ see Indications and Usage (1) and Dosage and Administration (2)].

Clinical studies of OTOVEL did not include sufficient numbers of subjects aged 65 years and over to determine whether they respond differently from younger subjects. Other reported clinical experience has not identified differences in responses between the elderly and younger patients.

Due to the characteristics of this preparation, no toxic effects are to be expected with an otic overdose of OTOVEL.

The chemical structure of fluocinolone acetonide is: 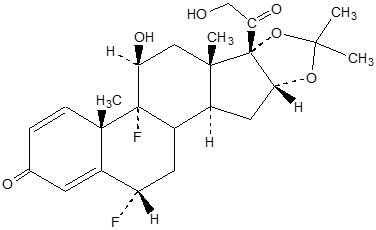 Fluocinolone acetonide, a corticosteroid, inhibits the local biosynthesis of prostaglandins, which explains part of its anti-inflammatory efficacy. At the cellular level, corticosteroids induce peptides called lipocortins. Lipocortins antagonize phospholipase A2, an enzyme which causes the breakdown of leukocyte lysosomal membranes to release arachidonic acid. This action decreases the subsequent formation and release of endogenous inflammatory mediators including prostaglandins, kinins, histamine, liposomal enzymes and the complement system.

In two studies in children with AOMT aged ≥ 6 months to 12 years, blood samples were taken in subgroups of 16 and 14 patients, at Visit 1 (prior to the first dose) and Visit 3 (within 1 and 2 hours after the last dose) respectively, to determine the plasma concentrations of ciprofloxacin and/or fluocinolone acetonide following administration of OTOVEL otic solution at the recommended dosage regimen of 0.25 mL twice daily. Pharmacokinetic (PK) analysis resulted in only 1 sample showing a detectable concentration of ciprofloxacin in plasma of 3.0 mcg/L after 7 days of treatment, and no detectable concentrations in plasma of fluocinolone acetonide were observed. However, the sample with detectable ciprofloxacin concentrations was from a patient who had bilateral AOMT (protocol deviation because all patients participating in the PK study were to have unilateral otorrhea) and who received treatment in both ears with ciprofloxacin 0.3% otic solution, the active comparator.

Bacterial resistance to quinolones can develop through chromosomal or plasmid-mediated mechanisms.

Ciprofloxacin has been shown to be active against most isolates of the following bacteria, both in vitro and clinically in otic infections [ see Indications and Usage (1)]:

No long term studies of OTOVEL have been performed to evaluate carcinogenic potential.

Long-term carcinogenicity studies in mice and rats have been completed for ciprofloxacin. After daily oral doses of 750 mg/kg (mice) and 250 mg/kg (rats) were administered for up to 2 years, there was no evidence that ciprofloxacin had any carcinogenic or tumorigenic effects in these species.

Long-term animal studies have not been performed to evaluate the carcinogenic potential of fluocinolone acetonide.

Studies have not been performed to evaluate the mutagenic potential of fluocinolone acetonide. Some corticosteroids have been found to be genotoxic.

No reproduction toxicity studies were conducted with OTOVEL. Absorption of ciprofloxacin and fluocinolone acetonide following otic administration of OTOVEL at the recommended dosage is negligible [ see Clinical Pharmacology (12.3)].

In both trials, the OTOVEL treatment arms showed significantly shorter times to cessation of otorrhea in comparison to both the ciprofloxacin and fluocinolone acetonide alone arms demonstrating the contribution of both components of OTOVEL. The results are presented in the table below:

Advise the patient or caregiver to read the FDA-approved patient labeling ( Patient Information and Instructions for Use).

Under license of Laboratorios SALVAT, S.A.

OTOVEL is a registered trademark of Laboratorios Salvat, S.A.

Read this Instructions for Use that comes with OTOVEL before you start using it and each time you get a refill. There may be new information. This information does not take the place of talking with your healthcare provider about your medical condition or treatment.

How should I use OTOVEL?

This Instructions for Use has been approved by the Food and Drug Administration.

FOR USE IN THE EAR ONLY 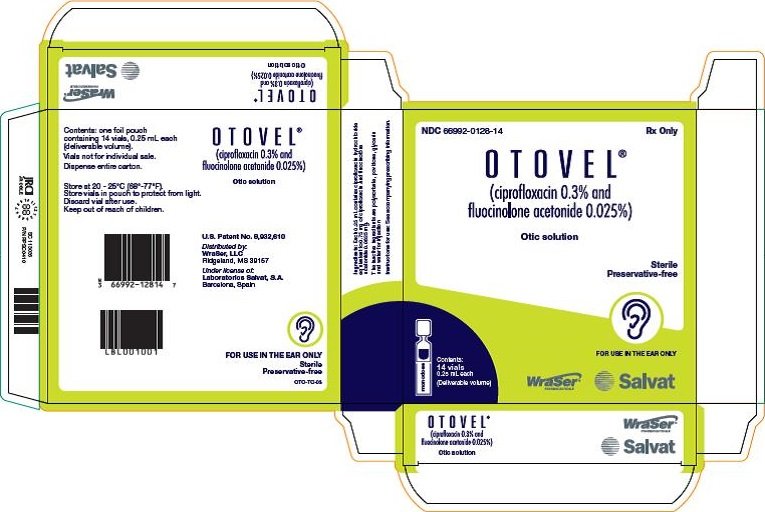