Milrinone Lactate Injection is a member of a class of bipyridine inotropic/vasodilator agents with phosphodiesterase inhibitor activity, distinct from digitalis glycosides or catecholamines. Milrinone lactate is designated chemically as 1,6-dihydro-2-methyl-6-oxo-[3,4´-bipyridine]-5-carbonitrile lactate and has the following structure:

As the lactate salt, it is stable and colorless to pale yellow in solution. Milrinone Lactate is available as sterile aqueous solutions of the lactate salt of Milrinone for injection or infusion intravenously.

Sterile, Single Dose Vials: Single dose vials of 10, 20 and 50 mL contain in each mL Milrinone lactate equivalent to 1 mg Milrinone and 47 mg dextrose anhydrous, USP, in water for injection, USP. The pH is adjusted to between 3.2 and 4.0 with lactic acid or sodium hydroxide. The total concentration of lactic acid can vary between 0.95 mg/mL and 1.29 mg/mL. These vials require preparation of dilutions prior to administration to patients intravenously.

Milrinone is a positive inotrope and vasodilator, with little chronotropic activity different in structure and mode of action from either the digitalis glycosides or catecholamines.

Milrinone, at relevant inotropic and vasorelaxant concentrations, is a selective inhibitor of peak III cAMP phosphodiesterase isozyme in cardiac and vascular muscle. This inhibitory action is consistent with cAMP mediated increases in intracellular ionized calcium and contractile force in cardiac muscle, as well as with cAMP dependent contractile protein phosphorylation and relaxation in vascular muscle. Additional experimental evidence also indicates that Milrinone is not a beta-adrenergic agonist nor does it inhibit sodium-potassium adenosine triphosphatase activity as do the digitalis glycosides.

Clinical studies in patients with congestive heart failure have shown that Milrinone produces dose-related and plasma drug concentration-related increases in the maximum rate of increase of left ventricular pressure. Studies in normal subjects have shown that Milrinone produces increases in the slope of the left ventricular pressure-dimension relationship, indicating a direct inotropic effect of the drug. Milrinone also produces dose-related and plasma concentration-related increases in forearm blood flow in patients with congestive heart failure, indicating a direct arterial vasodilator activity of the drug.

Both the inotropic and vasodilatory effects have been observed over the therapeutic range of plasma Milrinone concentrations of 100 ng/mL to 300 ng/mL.

Milrinone has been shown (by equilibrium dialysis) to be approximately 70% bound to human plasma protein.

In patients with heart failure due to depressed myocardial function, Milrinone produced a prompt dose and plasma concentration related increase in cardiac output and decreases in pulmonary capillary wedge pressure and vascular resistance, which were accompanied by mild-to-moderate increases in heart rate. Additionally, there is no increased effect on myocardial oxygen consumption. In uncontrolled studies, hemodynamic improvement during intravenous therapy with Milrinone was accompanied by clinical symptomatic improvement, but the ability of Milrinone to relieve symptoms has not been evaluated in controlled clinical trials. The great majority of patients experience improvements in hemodynamic function within 5 to 15 minutes of initiation of therapy.

In studies in congestive heart failure patients, Milrinone when administered as a loading injection followed by a maintenance infusion produced significant mean initial increases in cardiac index of 25 percent, 38 percent, and 42 percent at dose regimens of 37.5 mcg/kg/0.375 mcg/kg/min, 50 mcg/kg/0.5 mcg/kg/min, and 75 mcg/kg/0.75 mcg/kg/min, respectively. Over the same range of loading injections and maintenance infusions, pulmonary capillary wedge pressure significantly decreased by 20 percent, 23 percent, and 36 percent, respectively, while systemic vascular resistance significantly decreased by 17 percent, 21 percent, and 37 percent. Mean arterial pressure fell by up to 5 percent at the two lower dose regimens, but by 17 percent at the highest dose. Patients evaluated for 48 hours maintained improvements in hemodynamic function, with no evidence of diminished response (tachyphylaxis). A smaller number of patients have received infusions of Milrinone for periods up to 72 hours without evidence of tachyphylaxis.

The duration of therapy should depend upon patient responsiveness.

Milrinone has a favorable inotropic effect in fully digitalized patients without causing signs of glycoside toxicity. Theoretically, in cases of atrial flutter/fibrillation, it is possible that Milrinone may increase ventricular response rate because of its slight enhancement of AV node conduction. In these cases, digitalis should be considered prior to the institution of therapy with Milrinone.

Improvement in left ventricular function in patients with ischemic heart disease has been observed. The improvement has occurred without inducing symptoms or electrocardiographic signs of myocardial ischemia.

Milrinone lactate injection is indicated for the short-term intravenous treatment of patients with acute decompensated heart failure. Patients receiving Milrinone should be observed closely with appropriate electrocardiographic equipment. The facility for immediate treatment of potential cardiac events, which may include life threatening ventricular arrhythmias, must be available. The majority of experience with intravenous Milrinone has been in patients receiving digoxin and diuretics. There is no experience in controlled trials with infusions of Milrinone for periods exceeding 48 hours.

Milrinone lactate injectioniscontraindicatedinpatientswhoarehypersensitive to it.

Whether given orally or by continuous or intermittent intravenous infusion, Milrinone has not been shown to be safe or effective in the longer (greater than 48 hours) treatment of patients with heart failure. In a multicenter trial of 1088 patients with Class III and IV heart failure, long-term oral treatment with Milrinone was associated with no improvement in symptoms and an increased risk of hospitalization and death. In this study, patients with Class IV symptoms appeared to be at particular risk of life-threatening cardiovascular reactions. There is no evidence that Milrinone given by long-term continuous or intermittent infusion does not carry a similar risk.

The use of Milrinone both intravenously and orally has been associated with increased frequency of ventricular arrhythmias, including nonsustained ventricular tachycardia. Long-term oral use has been associated with an increased risk of sudden death. Hence, patients receiving Milrinone should be observed closely with the use of continuous electrocardiographic monitoring to allow the prompt detection and management of ventricular arrhythmias.

Milrinone should not be used in patients with severe obstructive aortic or pulmonic valvular disease in lieu of surgical relief of the obstruction. Like other inotropic agents, it may aggravate outflow tract obstruction in hypertrophic subaortic stenosis.

Supraventricular and ventricular arrhythmias have been observed in the high-risk population treated. In some patients, injections of Milrinone and oral Milrinone have been shown to increase ventricular ectopy, including nonsustained ventricular tachycardia. The potential for arrhythmia, present in congestive heart failure itself, may be increased by many drugs or combinations of drugs. Patients receiving Milrinone should be closely monitored during infusion.

Milrinone produces a slight shortening of AV node conduction time, indicating a potential for an increased ventricular response rate in patients with atrial flutter/fibrillation which is not controlled with digitalis therapy.

During therapy with Milrinone, blood pressure and heart rate should be monitored and the rate of infusion slowed or stopped in patients showing excessive decreases in blood pressure.

If prior vigorous diuretic therapy is suspected to have caused significant decreases in cardiac filling pressure, Milrinone should be cautiously administered with monitoring of blood pressure, heart rate, and clinical symptomatology.

There is no experience in controlled trials with infusions of Milrinone for periods exceeding 48 hours. Cases of infusion site reaction have been reported with intravenous Milrinone therapy (see ADVERSE REACTIONS). Consequently, careful monitoring of the infusion siteshould be maintained to avoid possible extravasation.

Use in Acute Myocardial Infarction

No clinical studies have been conducted in patients in the acute phase of post myocardial infarction. Until further clinical experience with this class of drugs is gained, Milrinone is not recommended in these patients.

Fluid and electrolyte changes and renal function should be carefully monitored during therapy with Milrinone. Improvement in cardiac output with resultant diuresis may necessitate a reduction in the dose of diuretic. Potassium loss due to excessive diuresis may predispose digitalized patients to arrhythmias. Therefore, hypokalemia should be corrected by potassium supplementation in advance of or during use of Milrinone.

Oral and intravenous administration of toxic dosages of Milrinone to rats and dogs resulted in myocardial degeneration/fibrosis and endocardial hemorrhage, principally affecting the left ventricular papillary muscles. Coronary vascular lesions characterized by periarterial edema and inflammation have been observed in dogs only. The myocardial/endocardial changes are similar to those produced by beta-adrenergic receptor agonists such as isoproterenol, while the vascular changes are similar to those produced by minoxidil and hydralazine. Doses within the recommended clinical dose range (up to 1.13 mg/kg/day) for congestive heart failure patients have not produced significant adverse effects in animals.

Oral administration of Milrinone to pregnant rats and rabbits during organogenesis produced no evidence of teratogenicity at dose levels up to 40 mg/kg/day and 12 mg/kg/day, respectively. Milrinone did not appear to be teratogenic when administered intravenously to pregnant rats at doses up to 3 mg/kg/day (about 2.5 times the maximum recommended clinical intravenous dose) or pregnant rabbits at doses up to 12 mg/kg/day, although an increased resorption rate was apparent at both 8 mg/kg/day and 12 mg/kg/day (intravenous) in the latter species. There are no adequate and well-controlled studies in pregnant women. Milrinone should be used during pregnancy only if the potential benefit justifies the potential risk to the fetus.

Caution should be exercised when Milrinone is administered to nursing women, since it is not known whether it is excreted in human milk.

Use in Elderly Patients

There are no special dosage recommendations for the elderly patient. Ninety percent of all patients administered Milrinone in clinical studies were within the age range of 45 to 70 years, with a mean age of 61 years. Patients in all age groups demonstrated clinically and statistically significant responses. No age-related effects on the incidence of adverse reactions have been observed. Controlled pharmacokinetic studies have not disclosed any age-related effects on the distribution and elimination of Milrinone.

Other cardiovascular adverse reactions include hypotension, 2.9% and angina/chest pain, 1.2%.

In the post-marketing experience, there have been rare cases of "torsades de pointes" reported.

Headaches, usually mild to moderate in severity, have been reported in 2.9% of patients receiving Milrinone.

Other adverse reactions reported, but not definitely related to the administration of Milrinone include hypokalemia, 0.6%; tremor, 0.4%; and thrombocytopenia, 0.4%.

Isolated spontaneous reports of bronchospasm and anaphylactic shock have been received;and in the post-marketing experience, liver function test abnormalities and skin reactions such as rash have been reported.

In addition to adverse events reported from clinical trials, the following events have been reported from worldwide post-marketing experience with Milrinone:

Doses of Milrinone may produce hypotension because of its vasodilator effect. If this occurs, administration of Milrinone should be reduced or temporarily discontinued until the patient's condition stabilizes. No specific antidote is known, but general measures for circulatory support should be taken.

A loading dose of Milrinone Lactate Injection (1 mg [base]/mL) should be administered followed by a continuous infusion (maintenance dose) according to the following guidelines:

The table below shows the loading dose in milliliters (mL) of Milrinone (1 mg/mL) by patient body weight (kg).

The loading dose may be given undiluted, but diluting to a rounded total volume of 10 or 20 mL (see Maintenance Dose for diluents) may simplify the visualization of the injection rate.

The infusion rate should be adjusted according to hemodynamic and clinical response. Patients should be closely monitored. In controlled clinical studies, most patients showed an improvement in hemodynamic status as evidenced by increases in cardiac output and reductions in pulmonary capillary wedge pressure.

Note: See “Dosage Adjustment in Renally Impaired Patients.” Dosage may be titrated to the maximum hemodynamic effect and should not exceed 1.13 mg/kg/day. Duration of therapy should depend upon patient responsiveness.

The maintenance dose in mL/hr by patient body weight (kg) may be determined by reference to the following table.

When administering Milrinone lactate by continuous infusion, it is advisable to use a calibrated electronic infusion device.
Intravenous drug products should be inspected visually and should not be used if particulate matter or discoloration is present.

How is Milrinone Supplied

Exposure of pharmaceutical products to heat should be minimized. Avoid excessive heat. Protect from freezing. 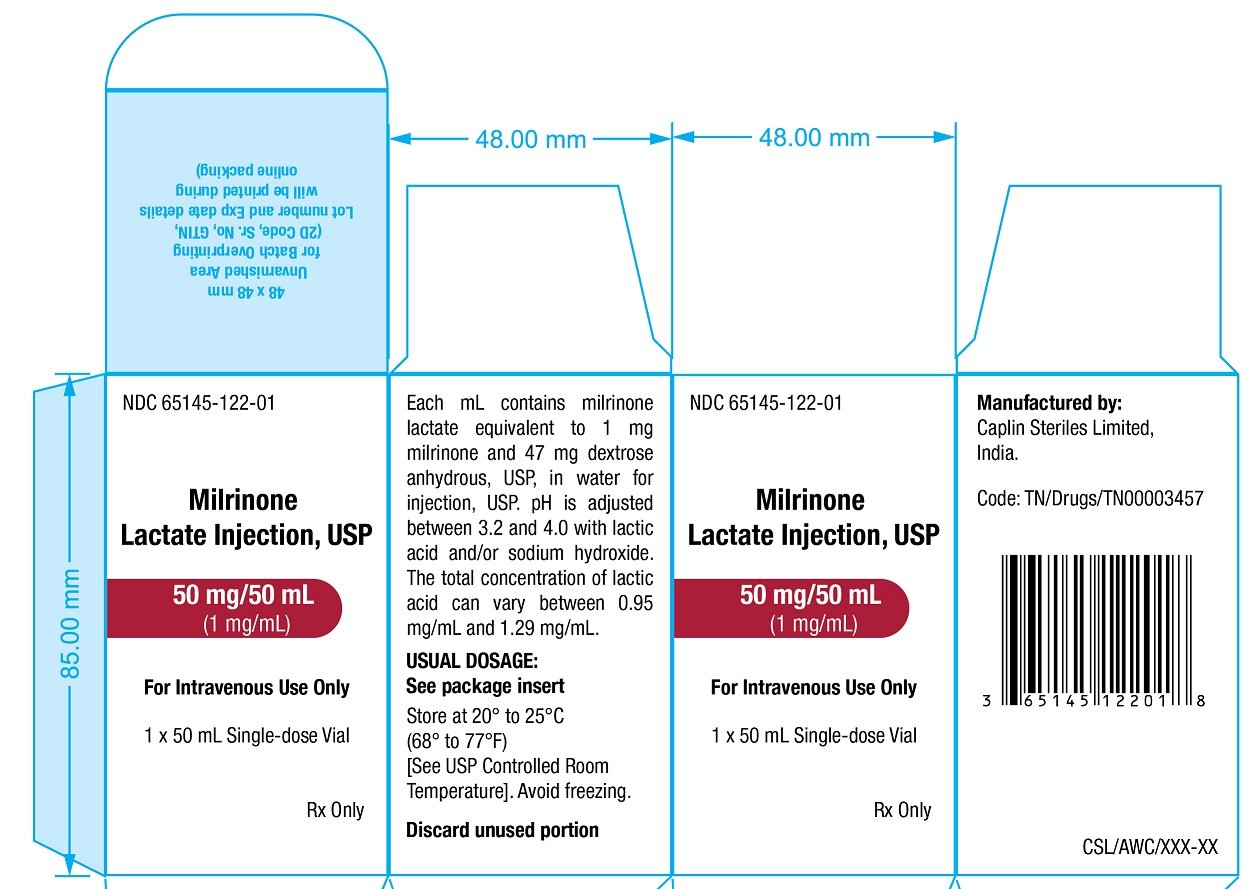