Embryo-Fetal Toxicity: Exposure to Margenza during pregnancy can cause embryo-fetal harm. Advise patients of the risk and need for effective contraception [see Warnings and Precautions (5.2), Use in Specific Populations (8.1, 8.3)].

Indications and Usage for Margenza

Margenza is indicated, in combination with chemotherapy, for the treatment of adult patients with metastatic HER2-positive breast cancer who have received two or more prior anti-HER2 regimens, at least one of which was for metastatic disease [see Dosage and Administration (2.1) and Clinical Studies (14.1)].

The recommended dose of Margenza is 15 mg/kg, administered as an intravenous infusion every 3 weeks (21-day cycle) until disease progression or unacceptable toxicity.

Administer Margenza as an intravenous infusion at 15 mg/kg over 120 minutes for the initial dose, then over a minimum of 30 minutes every 3 weeks for all subsequent doses.

Refer to the respective Prescribing Information for each therapeutic agent administered in combination with Margenza for the recommended dosage information, as appropriate.

If a patient misses a dose of Margenza, administer the scheduled dose as soon as possible. Adjust the administration schedule to maintain a 3-week interval between doses.

Assess left ventricular ejection fraction (LVEF) before starting Margenza and regularly during treatment. Withhold Margenza dosing for at least 4 weeks for any of the following:

Margenza dosing may be resumed if, within 8 weeks, LVEF returns to normal limits and absolute decrease from baseline is ≤ 15%. Permanently discontinue Margenza if LVEF decline persists for greater than 8 weeks, or if dosing is interrupted on greater than 3 occasions for LVEF decline.

Decrease the rate of infusion for mild or moderate infusion-related reactions (IRRs). Interrupt the infusion for dyspnea or clinically significant hypotension. Permanently discontinue Margenza dosing in patients with severe or life-threatening IRRs.

Administer as an intravenous infusion after dilution.

Do not administer as an intravenous push or bolus. Do not mix Margenza with other drugs.

Conduct thorough cardiac assessment, including history, physical examination, and determination of LVEF by echocardiogram or MUGA scan. The following schedule is recommended:

Based on findings in animals and mechanism of action, Margenza can cause fetal harm when administered to a pregnant woman. There are no available data on the use of Margenza in pregnant women to inform the drug-associated risk. In postmarketing reports, use of a HER2-directed antibody during pregnancy resulted in cases of oligohydramnios and oligohydramnios sequence manifesting as pulmonary hypoplasia, skeletal abnormalities and neonatal death. In an animal reproduction study, intravenous administration of margetuximab-cmkb to pregnant cynomolgus monkeys once every 3 weeks starting at gestational day (GD) 20 until delivery resulted in oligohydramnios and delayed infant kidney development. Animal exposures were ≥ 3 times the human exposures at the recommended dose, based on Cmax.

In SOPHIA, IRRs were reported by 13% of patients on Margenza plus chemotherapy. Most of the IRRs occur during Cycle 1. Grade 3 IRRs were reported in 1.5% of Margenza-treated patients. All IRRs resolved within 24 hours, irrespective of severity. In SOPHIA, IRRs leading to interruption of treatment occurred in 9% of patients treated with Margenza and chemotherapy. One patient (0.4%) on Margenza discontinued treatment due to IRR.

An infusion substudy in 88 patients in SOPHIA evaluated Margenza administered over 120 minutes for the initial dose, then 30 minutes from Cycle 2 forward. IRRs were ≤ Grade 2 and most occurred during the first (120 minutes) administration of Margenza. From Cycle 2 onward, one patient (1.1%) had an IRR (Grade 1).

Monitor patients for IRRs during Margenza administration and as clinically indicated after completion of infusion. Have medications and emergency equipment to treat IRRs available for immediate use. Monitor patients carefully until resolution of signs and symptoms.

In patients who experience mild or moderate IRRs, consider premedications, including antihistamines, corticosteroids, and antipyretics. Decrease the rate of infusion for mild or moderate IRRs. Interrupt Margenza infusion in patients experiencing dyspnea or clinically significant hypotension and intervene with medical therapy which may include epinephrine, corticosteroids, diphenhydramine, bronchodilators and oxygen. Patients should be evaluated and carefully monitored until complete resolution of signs and symptoms. Permanently discontinue Margenza in all patients with severe or life-threatening IRRs.

The following adverse reactions are discussed in greater detail in other sections of the label:

The safety of Margenza was evaluated in HER2-positive breast cancer patients who received two or more prior anti-HER2 regimens in SOPHIA [see Clinical Studies (14.1)].

Clinically relevant adverse reactions in ≤10% of patients who received Margenza in combination with chemotherapy included: dizziness and stomatitis (10%) each, decreased weight, dysgeusia, rash, and insomnia (6%) each, hypertension (5%), and syncope (1.5%).

As with all therapeutic proteins, there is potential for immunogenicity with Margenza. The detection of antibody formation is highly dependent on assay sensitivity and specificity. Additionally, the observed incidence of antibody (including neutralizing antibody) positivity in an assay may be influenced by several factors including assay methodology, sample handling, timing of sample collection, concomitant medications, and underlying disease. For these reasons, comparison of the incidence of antibodies to Margenza in the studies described below with the incidence of antibodies in other studies or to other products may be misleading.

Patients who receive anthracyclines less than 4 months after stopping Margenza [see Clinical Pharmacology (12.3)] may be at increased risk of cardiac dysfunction. While this interaction has not been studied with Margenza, clinical data from other HER2-directed antibodies warrants consideration. Avoid anthracycline-based therapy for up to 4 months after stopping Margenza. If concomitant use is unavoidable, closely monitor patient's cardiac function.

Based on findings in animals and mechanism of action, Margenza can cause fetal harm when administered to a pregnant woman. There are no available data on use of Margenza in pregnant women to inform the drug-associated risk. In postmarketing reports, use of a HER2-directed antibody during pregnancy resulted in cases of oligohydramnios and oligohydramnios sequence manifesting as pulmonary hypoplasia, skeletal abnormalities, and neonatal death. In an animal reproduction study, intravenous administration of margetuximab-cmkb to pregnant cynomolgus monkeys once every 3 weeks, starting at gestational day (GD) 20 until delivery, resulted in oligohydramnios and delayed infant kidney development. Animal exposures were ≥ 3 times the human exposures at the recommended dose, based on Cmax (see Data). Advise patients of potential risks to a fetus. There are clinical considerations if Margenza is used during pregnancy or within 4 months prior to conception (see Clinical Considerations).

Monitor women who received Margenza during pregnancy or within 4 months prior to conception for oligohydramnios. If oligohydramnios occurs, perform fetal testing that is appropriate for gestational age and consistent with community standards of care.

In an enhanced pre- and post-natal development study, pregnant cynomolgus monkeys received intravenous doses of 50 or 100 mg/kg margetuximab-cmkb once every 3 weeks starting on GD 20 and until delivery. Animal exposures at doses of 50 and 100 mg/kg were 3 and 6 times, respectively, the human exposures at the recommended dose, based on Cmax. Treatment with 50 and 100 mg/kg margetuximab-cmkb resulted in oligohydramnios beginning on GD 75.

There is no information regarding presence of Margenza in human milk, effects on the breastfed child, or effects on milk production. Published data suggest human IgG is present in human milk but does not enter neonatal or infant circulation in substantial amounts. Consider developmental and health benefits of breastfeeding along with the mother's clinical need for Margenza treatment and any potential adverse effects on the breastfed child from Margenza or from the underlying maternal condition. This consideration should also take into account the Margenza washout period of 4 months [see Clinical Pharmacology (12.3)].

Margenza can cause fetal harm when administered to a pregnant woman.

Verify pregnancy status of females of reproductive potential prior to initiation of Margenza.

Advise females of reproductive potential to use effective contraception during treatment and for 4 months following the last dose of Margenza [see Use in Specific Populations (8.1) and Clinical Pharmacology (12.3)].

Safety and effectiveness of Margenza have not been established in pediatric patients.

Of the 266 patients treated with Margenza 20% were 65 years of age or older and 4% were 75 years or older. No overall differences in efficacy were observed between patients ≥ 65 years of age compared to younger patients. There was a higher incidence of Grade ≥ 3 adverse reactions observed in patients age 65 years or older (56%) compared to younger patients (47%), as well as adverse reactions associated with potential cardiotoxicity (35% vs 18%).

The exposure-response relationship and time course of pharmacodynamic response for the safety and effectiveness of margetuximab-cmkb have not been fully characterized.

Margetuximab-cmkb is expected to be metabolized into small peptides by catabolic pathways.

Studies have not been performed to evaluate carcinogenic or mutagenic potential of margetuximab-cmkb.

The efficacy of Margenza plus chemotherapy was evaluated in SOPHIA (NCT02492711), a randomized, multicenter, open-label trial of 536 patients with IHC 3+ or ISH-amplified HER2+ metastatic breast cancer who had received prior treatment with other anti-HER2 therapies. Patients were randomized (1:1) to Margenza plus chemotherapy or trastuzumab plus chemotherapy. Randomization was stratified by chemotherapy choice (capecitabine, eribulin, gemcitabine, or vinorelbine), number of lines of therapy in the metastatic setting (≤ 2, > 2), and number of metastatic sites (≤ 2, > 2). Patients were required to have progressed on or after the most recent line of therapy. Prior radiotherapy and hormonal therapy were allowed. Patients received Margenza intravenously at a dose of 15 mg/kg every 3 weeks administered over 120 minutes for the initial administration and then over 30 to 120 minutes thereafter. Trastuzumab was given intravenously at an initial dose of 8 mg/kg over 90 minutes, followed by 6 mg/kg over 30 minutes every 3 weeks thereafter. Patients were treated with Margenza or trastuzumab in combination with chemotherapy until disease progression or unacceptable toxicity.

Efficacy results are summarized in Table 3 and Figure 1.

Results for investigator-assessed PFS were similar to the independent blinded PFS results. At the protocol pre-specified second interim analysis of OS, the OS data were not mature with 50% of deaths in the overall population.

Consistent PFS results were observed across patient subgroups defined by study stratification factors (chemotherapy choice, number of lines of therapy in the metastatic setting, and number of metastatic sites).

Margenza (margetuximab-cmkb) injection is a clear to slightly opalescent, colorless to pale yellow or pale brown solution in a single-dose vial supplied as:

Store vials refrigerated at 2°C to 8°C (36°F to 46°F) in original carton to protect from light until time of use.

Do not freeze. Do not shake.

Advise patients to contact a health care professional immediately for any of the following: new onset or worsening shortness of breath, cough, swelling of the ankles/legs, swelling of the face, palpitations, weight gain of more than 5 pounds in 24 hours, dizziness or loss of consciousness [see Warnings and Precautions (5.1)].

Advise pregnant women and females of reproductive potential that exposure to Margenza during pregnancy or within 4 months prior to conception can result in fetal harm. Advise female patients to contact their healthcare provider with a known or suspected pregnancy [see Warnings and Precautions (5.2), Use in Specific Populations (8.1)].

Advise females of reproductive potential to use effective contraception during treatment with Margenza and for 4 months following the last dose [see Warnings and Precautions (5.2), Use in Specific Populations (8.3)]. 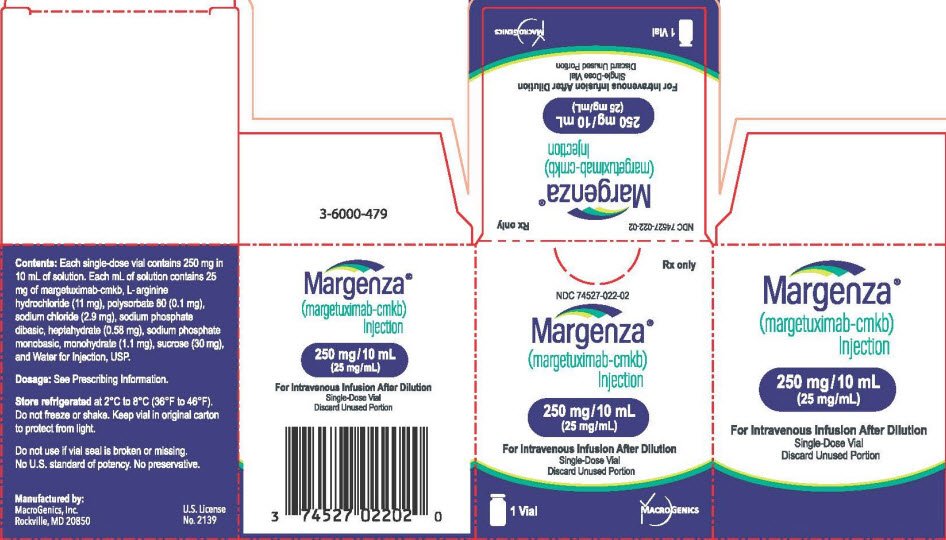