Imodium® (loperamide hydrochloride), 4-(p-chlorophenyl)-4-hydroxy-N,N-dimethyl-a,a-diphenyl-1-piperidinebutyramide monohydrochloride, is a synthetic antidiarrheal for oral use. 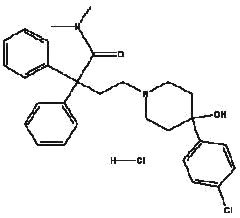 Imodium® is available in 2mg capsules.

In man, Imodium® prolongs the transit time of the intestinal contents. It reduces daily fecal volume, increases the viscosity and bulk density, and diminishes the loss of fluid and electrolytes. Tolerance to the antidiarrheal effect has not been observed. Clinical studies have indicated that the apparent elimination half-life of loperamide in man is 10.8 hours with a range of 9.1 - 14.4 hours. Plasma levels of unchanged drug remain below 2 nanograms per mL after the intake of a 2mg capsule of Imodium®. Plasma levels are highest approximately five hours after administration of the capsule and 2.5 hours after the liquid. The peak plasma levels of loperamide were similar for both formulations. Elimination of loperamide mainly occurs by oxidative N-demethylation. Cytochrome P450 (CYP450) isozymes, CYP2C8 and CYP3A4, are thought to play an important role in loperamide N-demethylation process since quercetin (CYP2C8 inhibitor) and ketoconazole (CYP3A4 inhibitor) significantly inhibited the N-demethylation process in vitro by 40% and 90%, respectively. In addition, CYP2B6 and CYP2D6 appear to play a minor role in loperamide N-demethylation. Excretion of the unchanged loperamide and its metabolites mainly occurs through the feces. In those patients in whom biochemical and hematological parameters were monitored during clinical trials, no trends toward abnormality during Imodium® therapy were noted. Similarly, urinalyses, EKG and clinical ophthalmological examinations did not show trends toward abnormality.

Indications and Usage for Imodium

Imodium® (loperamide hydrochloride) is indicated for the control and symptomatic relief of acute nonspecific diarrhea and of chronic diarrhea associated with inflammatory bowel disease. Imodium® is also indicated for reducing the volume of discharge from ileostomies.

Imodium is contraindicated in patients with a known hypersensitivity to loperamide hydrochloride or to any of the excipients.

Imodium is contraindicated in patients with abdominal pain in the absence of diarrhea.

Imodium is not recommended in infants below 24 months of age.

Imodium should not be used as the primary therapy:

In general, Imodium should not be used when inhibition of peristalsis is to be avoided due to the possible risk of significant sequelae including ileus, megacolon and toxic megacolon. Imodium must be discontinued promptly when constipation, abdominal distention or ileus develop.

Treatment of diarrhea with Imodium is only symptomatic. Whenever an underlying etiology can be determined, specific treatment should be given when appropriate (or when indicated).

Patients with AIDS treated with Imodium for diarrhea should have therapy stopped at the earliest signs of abdominal distention. There have been isolated reports of toxic megacolon in AIDS patients with infectious colitis from both viral and bacterial pathogens treated with loperamide hydrochloride.

Extremely rare allergic reactions including anaphylaxis and anaphylactic shock have been reported. In acute diarrhea, if clinical improvement is not observed in 48 hours, the administration of Imodium® (loperamide hydrochloride) should be discontinued and patients should be advised to consult their physician. Although no pharmacokinetic data are available in patients with hepatic impairment, Imodium should be used with caution in such patients because of reduced first pass metabolism. Patients with hepatic dysfunction should be monitored closely for signs of CNS toxicity. No pharmacokinetic data are available in patients with renal impairment. Since it has been reported that the majority of the drug is metabolized and metabolites or the unchanged drug is excreted mainly in the feces, dosage adjustments in patients with renal impairment are not required. No formal studies have been conducted to evaluate the pharmacokinetics of loperamide in elderly subjects. However, in two studies that enrolled elderly patients, there were no major differences in the drug disposition in elderly patients with diarrhea relative to young patients.

Patients should be advised to check with their physician if their diarrhea does not improve in 48 hours or if they note blood in their stools, develop a fever or develop abdominal distention. Tiredness, dizziness, or drowsiness may occur in the setting of diarrheal syndromes treated with Imodium. Therefore, it is advisable to use caution when driving a car or operating machinery. (see Adverse Reactions).

In an 18-month rat study with oral doses up to 40 mg/kg/day (21 times the maximum human dose of 16 mg/day, based on a body surface area comparison), there was no evidence of carcinogenesis.

Loperamide was not genotoxic in the Ames test, the SOS chromotest in E. coli, the dominant lethal test in female mice, or the mouse embryo cell transformation assay.

In a peri- and post-natal reproduction study in rats, oral administration of 40 mg/kg/day produced impairment of growth and survival of offspring.

Small amounts of loperamide may appear in human breast milk. Therefore, Imodium is not recommended during breast-feeding.

See the "Warnings" Section for information on the greater variability of response in this age group. In case of accidental overdosage of Imodium® by children, see "Overdosage" Section for suggested treatment.

The adverse effects reported during clinical investigations of Imodium® (loperamide hydrochloride) are difficult to distinguish from symptoms associated with the diarrheal syndrome. Adverse experiences recorded during clinical studies with Imodium® were generally of a minor and self-limiting nature. They were more commonly observed during the treatment of chronic diarrhea.

The adverse events reported are summarized irrespective of the causality assessment of the investigators.

The adverse events with an incidence of 1.0% or greater, which were reported at least as often in patients on loperamide hydrochloride as on placebo, are presented in the table below.

The adverse events with an incidence of 1.0% or greater, which were more frequently reported in patients on placebo than on loperamide hydrochloride, were: dry mouth, flatulence, abdominal cramp and colic.

The adverse events with an incidence of 1.0% or greater, which were reported at least as often in patients on loperamide hydrochloride as on placebo, are presented below in the table below.

The adverse events with an incidence of 1.0% or greater, which were more frequently reported in patients on placebo than on loperamide hydrochloride were: nausea, vomiting, headache, meteorism, abdominal pain, abdominal cramp and colic.

The adverse events with an incidence of 1.0% or greater in patients from all studies are given in the table below.

The following adverse events have been reported:

Rash, pruritus, urticaria, angioedema, and extremely rare cases of bullous eruption including erythema multiforme, Stevens-Johnson syndrome and Toxic Epidermal Necrolysis have been reported with use of Imodium

Immune system disorders
Isolated occurrences of allergic reactions and in some cases severe hypersensitivity reactions including anaphylactic shock and anaphylactoid reactions have been reported with the use of Imodium.

A number of the adverse events reported during the clinical investigations and post-marketing experience with loperamide are frequent symptoms of the underlying diarrheal syndrome (abdominal pain/discomfort, nausea, vomiting, dry mouth, tiredness, drowsiness, dizziness, constipation, and flatulence). These symptoms are often difficult to distinguish from undesirable drug effects.

Studies in morphine-dependent monkeys demonstrated that loperamide hydrochloride at doses above those recommended for humans prevented signs of morphine withdrawal. However, in humans, the naloxone challenge pupil test, which when positive indicates opiate-like effects, performed after a single high dose, or after more than two years of therapeutic use of Imodium® (loperamide hydrochloride), was negative. Orally administered Imodium® (loperamide formulated with magnesium stearate) is both highly insoluble and penetrates the CNS poorly.

In cases of overdosage, (including relative overdose due to hepatic dysfunction), urinary retention, paralytic ileus and CNS depression may occur. Children may be more sensitive to CNS effects than adults. Clinical trials have demonstrated that a slurry of activated charcoal administered promptly after ingestion of loperamide hydrochloride can reduce the amount of drug which is absorbed into the systemic circulation by as much as ninefold. If vomiting occurs spontaneously upon ingestion, a slurry of 100 gms of activated charcoal should be administered orally as soon as fluids can be retained.

If vomiting has not occurred, gastric lavage should be performed followed by administration of 100 gms of the activated charcoal slurry through the gastric tube. In the event of overdosage, patients should be monitored for signs of CNS depression for at least 24 hours.

If symptoms of overdose occur, naloxone can be given as an antidote. If responsive to naloxone, vital signs must be monitored carefully for recurrence of symptoms of drug overdose for at least 24 hours after the last dose of naloxone.

In view of the prolonged action of loperamide and the short duration (one to three hours) of naloxone, the patient must be monitored closely and treated repeatedly with naloxone as indicated. Since relatively little drug is excreted in the urine, forced diuresis is not expected to be effective for Imodium® (loperamide hydrochloride) overdosage.

In clinical trials an adult who took three 20mg doses within a 24 hour period was nauseated after the second dose and vomited after the third dose. In studies designed to examine the potential for side effects, intentional ingestion of up to 60 mg of loperamide hydrochloride in a single dose to healthy subjects resulted in no significant adverse effects.

Adults: The recommended initial dose is 4mg (two capsules) followed by 2 mg (one capsule) after each unformed stool. Daily dose should not exceed 16mg (eight capsules). Clinical improvement is usually observed within 48 hours.

Recommended Subsequent Daily Dosage
Following the first treatment day, it is recommended that subsequent Imodium® doses (1 mg/10 kg body weight) be administered only after a loose stool. Total daily dosage should not exceed recommended dosages for the first day.

Children: Although Imodium® has been studied in a limited number of children with chronic diarrhea; the therapeutic dose for the treatment of chronic diarrhea in a pediatric population has not been established.

Adults: The recommended initial dose is 4 mg (two capsules) followed by 2 mg (one capsule) after each unformed stool until diarrhea is controlled, after which the dosage of Imodium® should be reduced to meet individual requirements. When the optimal daily dosage has been established, this amount may then be administered as a single dose or in divided doses.

The average daily maintenance dosage in clinical trials was 4 to 8 mg (two to four capsules). A dosage of 16 mg (eight capsules) was rarely exceeded. If clinical improvement is not observed after treatment with 16 mg per day for at least 10 days, symptoms are unlikely to be controlled by further administration. Imodium® administration may be continued if diarrhea cannot be adequately controlled with diet or specific treatment.

The use of Imodium in children under 2 years is not recommended. There have been rare reports of paralytic ileus associated with abdominal distention. Most of these reports occurred in the setting of acute dysentery, overdose, and with very young children less than two years of age.

No formal pharmacokinetic studies were conducted in elderly subjects. However, there were no major differences reported in the drug disposition in elderly patients with diarrhea relative to young patients. No dosage adjustment is required in the elderly.

Although no pharmacokinetic data are available in patients with hepatic impairment, Imodium should be used with caution in such patients because of reduced first pass metabolism. (see Precautions).

How is Imodium Supplied

Capsules - each capsule contains 2 mg of loperamide hydrochloride. The capsules have a light green body and a dark green cap with "JANSSEN" imprinted on one segment and "Imodium" on the other segment. Imodium® capsules are supplied in bottles of 100.