Indications and Usage for Diltiazem Injection

Diltiazem Hydrochloride in Dextrose Injection is indicated for the temporary control of rapid ventricular rate in atrial fibrillation or atrial flutter.

Administer intravenous diltiazem in a setting with continuous monitoring of the ECG and frequent measurement of blood pressure. A defibrillator and emergency equipment should be readily available.

Immediately following bolus, the recommended initial infusion rate of diltiazem hydrochloride is 5 mg/hour. Adjust the infusion rate in 5 mg/hour increments up to a maximum of 15 mg/hour as needed to achieve satisfactory rate control. Infusions longer than 24 hours have not been studied. Patients should generally be transitioned to other antiarrhythmic agents within 24 hours [see Clinical Studies (14)].

Injection: Clear, colorless solution in a single-dose bag for intravenous use.

Diltiazem Hydrochloride Injection is contraindicated in:

Diltiazem is a negative inotrope and can cause decreased systolic function and heart failure. Do not initiate in patients with acute decompensated heart failure or cardiogenic shock. If heart failure develops during diltiazem treatment, discontinue treatment and treat heart failure appropriately.

Diltiazem can cause symptomatic hypotension. Patients with low blood pressure at baseline and those on concomitant medications that decrease blood pressure, intravascular volume, or myocardial contractility are at increased risk for hypotension.

The following adverse reaction rates are based on the use of diltiazem hydrochloride injection in over 400 domestic clinical trial patients with atrial fibrillation/flutter or PSVT under double-blind or open-label conditions.

Hypotension was the most commonly reported adverse event during clinical trials, with symptomatic hypotension occurring in 3.2% of patients. Other events reported in a least 1% of the diltiazem-treated patients were injection site reactions (e.g., itching, burning) - 3.9%, vasodilation (flushing) - 1.7%, and arrhythmia (junctional rhythm or isorhythmic dissociation) - 1%.

In addition, the following events were reported infrequently (less than 1%):

Although not observed in clinical trials with diltiazem hydrochloride injection, the following events associated with oral diltiazem may occur:

a Strong and moderate inhibitors increase the AUC of sensitive substrates of CYP3A4 by ≥ 5 and ≥ 2-fold, respectively
b These examples are a guide and not considered a comprehensive list of all possible drugs that may fit this category. The healthcare provider should consult appropriate references for comprehensive information.

The available data from the published literature over decades of use with diltiazem during pregnancy have not identified a drug associated risk of major birth defects, miscarriage, or adverse maternal or fetal outcomes. In animal reproduction studies, decreased embryo and fetal survival rates, and skeletal abnormalities have been observed at oral doses five to ten times the human oral antianginal therapeutic dose, and reduction in pup weights was also observed. At 20 times the human oral antianginal therapeutic dose, an increase in stillbirths was observed (see Data).

Reproduction studies have been conducted in mice, rats, and rabbits. Administration of oral doses ranging from five to ten times greater (on a mg/kg basis) than the human oral antianginal therapeutic dose has resulted in embryo and fetal lethality. These doses, in some studies, have been reported to cause skeletal abnormalities. In the perinatal/postnatal studies there was some reduction in early individual pup weights and survival rates. There was an increased incidence of stillbirths at doses of 20 times the human oral antianginal therapeutic dose or greater.

Published literature reports the presence of diltiazem in human milk. One report with oral diltiazem suggests that concentrations in breast milk may approximate serum levels. There are no data on the effects of diltiazem on the breastfed child or the effects on milk production. The developmental and health benefits of breastfeeding should be considered along with the mother’s clinical need for Diltiazem Hydrochloride Injection and any potential adverse effects on the breastfed child from Diltiazem Hydrochloride Injection or from the underlying maternal condition.

Clinical studies of diltiazem did not include sufficient numbers of subjects aged 65 and over to determine whether they respond differently from younger subjects. Other reported clinical experience has not identified differences in responses between the elderly and younger patients. In general, dose selection for an elderly patient should be cautious, usually starting at the low end of the dosing range, reflecting the greater frequency of decreased hepatic, renal, or cardiac function, and of concomitant disease or other drug therapy.

Overdosage experience is limited. In the event of overdosage or an exaggerated response, appropriate supportive measures should be employed.

Diltiazem does not appear to be removed by peritoneal or hemodialysis. Limited data suggest that plasmapheresis may hasten diltiazem elimination following overdose.

The intravenous LD50's in mice and rats were 60 and 38 mg/kg, respectively. The toxic dose in humans is not known. 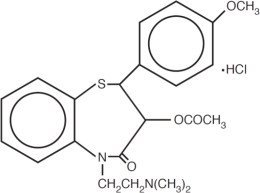 Diltiazem hydrochloride is a white to off-white crystalline powder with a bitter taste soluble in water, methanol, and chloroform.

The therapeutic effects of diltiazem are believed to be related to inhibiting influx of calcium ions during membrane depolarization of cardiac and vascular smooth muscle.

Diltiazem prolongs the sinus cycle length. It has no effect on the sinus node recovery time or on the sinoatrial conduction time in patients without SA nodal dysfunction. Diltiazem has no significant electrophysiologic effect on tissues in the heart that are fast sodium channel dependent, e.g., His-Purkinje tissue, atrial and ventricular muscle, and extra nodal accessory pathways.

Like other calcium channel antagonists, because of its effect on vascular smooth muscle, diltiazem decreases total peripheral resistance resulting in a decrease in both systolic and diastolic blood pressure.

Intravenous diltiazem hydrochloride 20 mg prolongs AH conduction time and AV node functional and effective refractory periods by approximately 20%. PR in healthy volunteers and HR in patients with atrial fibrillation and atrial flutter are dependent on plasma level of diltiazem. Based on this relationship, the mean plasma diltiazem concentration required to produce a 20%, 30% and 40% decrease in heart rate was determined to be 80 ng/mL, 130 ng/mL and 300 ng/mL, respectively.

The volume of distribution of diltiazem is approximately 305 L. Diltiazem is 70% to 80% bound to plasma proteins. In vitro studies suggest alpha1-acid glycoprotein binds approximately 40% of the drug at clinically significant concentrations. Albumin appears to bind approximately 30% of the drug, while other constituents bind the remaining bound fraction. Competitive in vitro ligand binding studies have shown that diltiazem hydrochloride binding is not altered by therapeutic concentrations of digoxin, phenytoin, hydrochlorothiazide, indomethacin, phenylbutazone, propranolol, salicylic acid, tolbutamide, or warfarin.

The systemic clearance of diltiazem has been found to be decreased in patients with atrial fibrillation or atrial flutter, compared to healthy volunteers. In patients administered continuous infusions at 10 mg/h or 15 mg/h for 24 h, diltiazem systemic clearance averaged 42 L/h and 31 L/h, respectively. The plasma elimination half-life is approximately 3.4 h. Total radioactivity measurement following short IV administration in healthy volunteers suggests the presence of other unidentified metabolites which attain higher concentrations than those of diltiazem and are more slowly eliminated; half-life of total radioactivity is about 20 h compared to 2 to 5 h for diltiazem.

After constant rate intravenous infusion to healthy male volunteers, diltiazem exhibits nonlinear pharmacokinetics over an infusion range of 4.8 to 13.2 mg/h for 24 h. Over this infusion range, as the dose is increased, systemic clearance decreases from 64 to 48 L/h while the plasma elimination half-life increases from 4.1 to 4.9 h. The volume of distribution remains unchanged (360 to 391 L).

Effect of Diltiazem on Other Drugs:

Beta-blockers: Controlled and uncontrolled domestic studies suggest that concomitant use of diltiazem and beta-blockers is usually well tolerated, but available data are not sufficient to predict the effects of concomitant treatment in patients with left ventricular dysfunction or cardiac conduction abnormalities. Administration of diltiazem concomitantly with propranolol in five normal volunteers resulted in increased propranolol levels in all subjects and bioavailability of propranolol was increased approximately 50%. In vitro, propranolol appears to be displaced from its binding sites by diltiazem [see Warnings and Precautions (5.1, 5.2)].

Digitalis: Intravenous diltiazem has been administered to patients receiving either intravenous or oral digitalis therapy. The combination of the two drugs was well tolerated without serious adverse effects.

Ivabradine: Coadministration with diltiazem resulted in approximately 3-fold the AUC and Cmax of ivabradine and 20-60% increase in the active metabolite (S18982) exposure [see Drug Interactions (7)].

Buspirone: With diltiazem, the mean buspirone AUC was about 5.5-fold and Cmax was about 4.1-fold what they are alone. The t1/2 and Tmax of buspirone were not affected by diltiazem [see Drug Interactions (7)].

Carbamazepine: Concomitant administration of diltiazem with carbamazepine was reported to result in elevated serum levels of carbamazepine (40% to 72% increase), resulting in toxicity in some cases [see Drug Interactions (7)].

Quinidine: Diltiazem increases the AUC of quinidine by 51%, elimination half-life by 36%, and decreases its oral clearance by 33% [see Drug Interactions (7)].

Ranolazine: On coadministration with diltiazem 180 to 360 mg daily, the plasma levels of ranolazine are 2.2-to 2.8-fold what they are alone. Diltiazem plasma levels are not affected by ranolazine [see Drug Interactions (7)].

Statins: Diltiazem has been shown to increase the AUC of some statins. The risk of myopathy and rhabdomyolysis with statins metabolized by CYP3A4 may be increased with concomitant use of diltiazem [see Drug Interactions (7)].

Coadministration of a simvastatin with 120 mg BID diltiazem SR resulted in 5 times the mean simvastatin AUC versus simvastatin alone. Higher doses of diltiazem are likely to be worse.

Effect of Other Drugs on Diltiazem:

Cimetidine and Ranitidine: Coadministration with cimetidine increased Cmax of diltiazem by 58% and AUC by 53%. Ranitidine produced smaller, non-significant increases. The effect may be mediated by cimetidine's known inhibition of hepatic CYP3A, the enzyme system responsible for the first-pass metabolism of diltiazem [see Drug Interactions (7)].

In domestic controlled trials in patients with atrial fibrillation or atrial flutter, bolus administration of diltiazem hydrochloride injection was effective in reducing heart rate by at least 20% in 95% of patients. Diltiazem hydrochloride injection rarely converts atrial fibrillation or atrial flutter to normal sinus rhythm. Following administration of one or two intravenous bolus doses of Diltiazem Injection, response usually occurs within 3 minutes and maximal heart rate reduction generally occurs in 2 to 7 minutes. Heart rate reduction may last from 1 to 3 hours. If hypotension occurs, it is generally short-lived, but may last from 1 to 3 hours.

A 24-hour continuous infusion of Diltiazem Injection in the treatment of atrial fibrillation or atrial flutter maintained at least a 20% heart rate reduction during the infusion in 83% of patients. Upon discontinuation of infusion, heart rate reduction may last from 0.5 hours to more than 10 hours (median duration 7 hours). Hypotension, if it occurs, may be similarly persistent.

In the controlled clinical trials, 3.2% of patients required some form of intervention (typically, use of intravenous fluids or the Trendelenburg position) for blood pressure support following diltiazem hydrochloride injection.

In domestic controlled trials, bolus administration of diltiazem hydrochloride injection was effective in converting PSVT to normal sinus rhythm in 88% of patients within 3 minutes of the first or second bolus dose.

Symptoms associated with the arrhythmia were improved in conjunction with decreased heart rate or conversion to normal sinus rhythm following administration of diltiazem hydrochloride injection.

Diltiazem Hydrochloride Injection is supplied as a sterile, unpreserved, colorless solution in a single-dose polymeric bag containing 1 mg/mL of diltiazem as either a 125 mg of diltiazem in 125 mL of solution (51754-3000-1) or 250 mg diltiazem in 250 mL (51754-3500-1) sealed with a Twist Off port and oversealed in an aluminum pouch.

Store under refrigeration at 2°C to 8°C (36°F to 46°F). The single-dose bags in their original pouches are stable for up to one month at room temperature without significant loss of potency. The bag and port is not made with natural rubber latex, PVC, or DEHP. 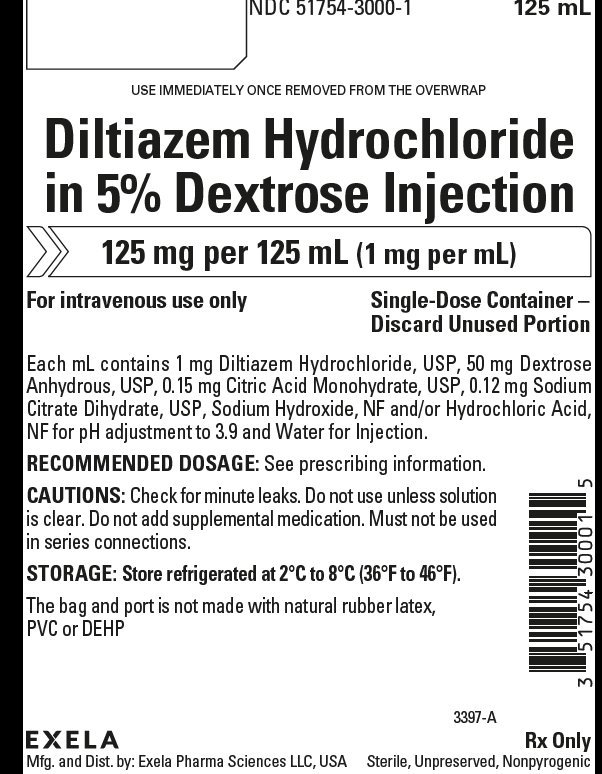 USE IMMEDIATELY ONCE REMOVED FROM THE OVERWRAP

For intravenous use only Single-Dose Container-Discard Unused Portion

LEAVE BAG IN OVERWRAP UNTIL USE Discard Unused Portion 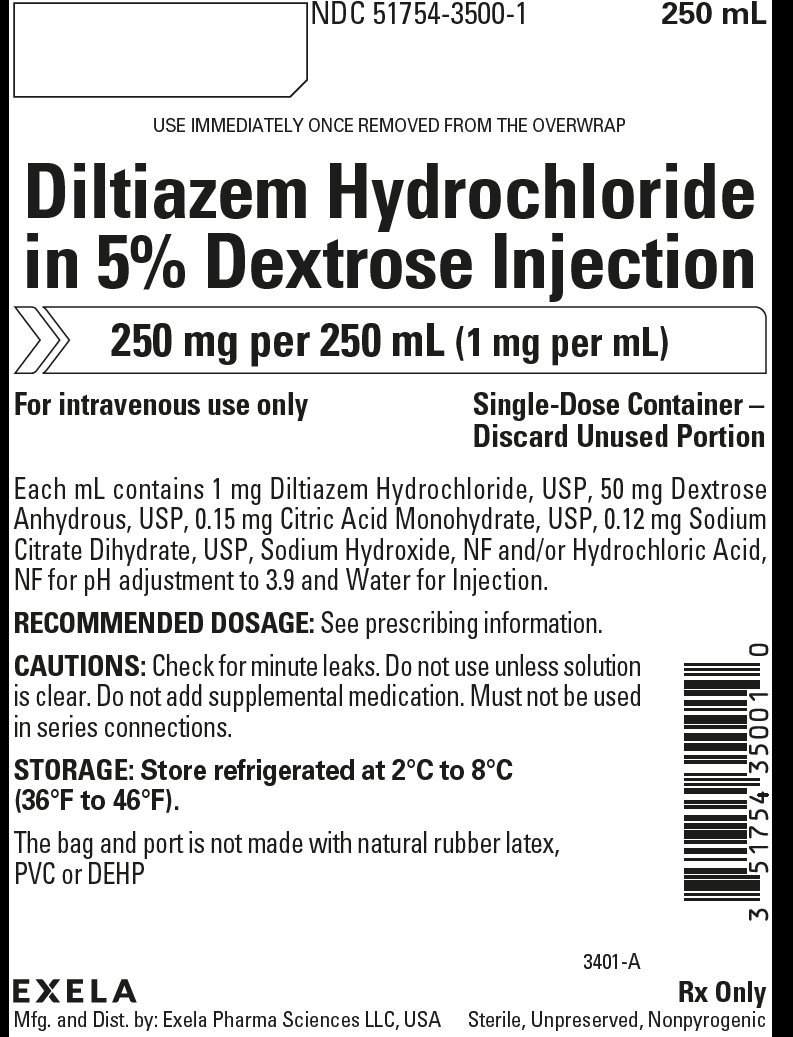 USE IMMEDIATELY ONCE REMOVED FROM THE OVERWRAP

For intravenous use only Single-Dose Container-Discard Unused Portion 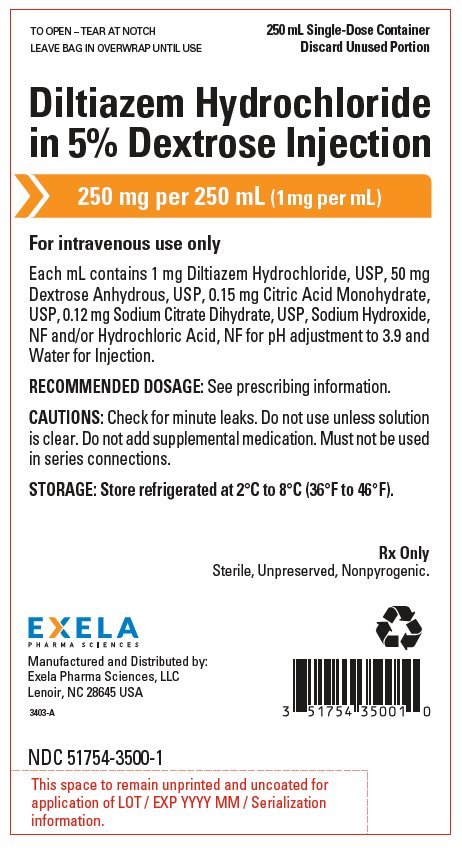 LEAVE BAG IN OVERWRAP UNTIL USE Discard Unused Portion 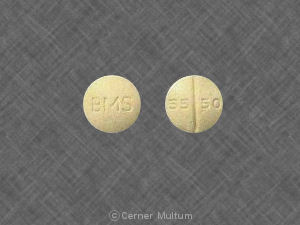