FOR TOPICAL DERMATOLOGIC USE ONLY.

Not for Ophthalmic, Oral or Intravaginal Use. 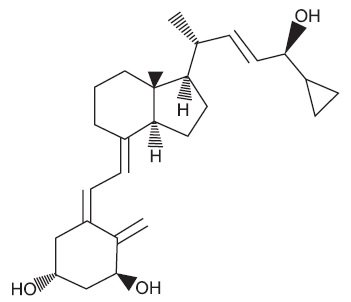 In humans, the natural supply of vitamin D depends mainly on exposure to the ultraviolet rays of the sun for conversion of 7-dehydrocholesterol to vitamin D 3 (cholecalciferol) in the skin. Calcipotriene is a synthetic analog of vitamin D 3.

Clinical studies with radiolabelled Calcipotriene Ointment indicate that approximately 6% (± 3%, SD) of the applied dose of calcipotriene is absorbed systemically when the ointment is applied topically to psoriasis plaques or 5% (± 2.6%, SD) when applied to normal skin, and much of the absorbed active is converted to inactive metabolites within 24 hours of application.

Vitamin D and its metabolites are transported in the blood, bound to specific plasma proteins. The active form of the vitamin, 1,25-dihydroxy vitamin D 3 (calcitriol), is known to be recycled via the liver and excreted in the bile. Calcipotriene metabolism following systemic uptake is rapid, and occurs via a similar pathway to the natural hormone. The primary metabolites are much less potent than the parent compound.

There is evidence that maternal 1,25-dihydroxy vitamin D 3 (calcitriol) may enter the fetal circulation, but it is not known whether it is excreted in human milk. The systemic disposition of calcipotriene is expected to be similar to that of the naturally occurring vitamin.

Subtracting percentages of patients using placebo (vehicle only) from percentages of patients using calcipotriene who had at least marked improvements after 8 weeks yields 39.9% for once daily and 49.6% for twice daily. This adjustment for placebo effect indicates that what might appear to be differences between once daily and twice daily use may reflect differences in the studies independent from the frequency of dosing. Although there was a numerical difference in comparison across studies, twice daily dosing has not been shown to be superior in efficacy to once daily dosing.

Over 400 patients have been treated in open label clinical studies of calcipotriene for periods of up to one year. In half of these studies, patients who previously had not responded well to calcipotriene were excluded. The adverse events in these extended studies included skin irritation in approximately 25% of patients and worsening of psoriasis in approximately 10% of patients. In one of these open label studies, half of the patients no longer required calcipotriene by 16 weeks of treatment, because of satisfactory therapeutic results.

Indications and Usage for Calcipotriene Ointment

Calcipotriene Ointment, 0.005%, is indicated for the treatment of plaque psoriasis in adults. The safety and effectiveness of topical calcipotriene in dermatoses other than psoriasis have not been established.

For external use only. Keep out of the reach of children. Always wash hands thoroughly after use.

Transient, rapidly reversible elevation of serum calcium has occurred with use of calcipotriene. If elevation in serum calcium outside the normal range should occur, discontinue treatment until normal calcium levels are restored.

Patients using calcipotriene should receive the following information and instructions:

When calcipotriene was applied topically to mice for up to 24 months at dosages of 3, 10 and 30 mcg/kg/day (corresponding to 9, 30 and 90 mcg/m 2/day), no significant changes in tumor incidence were observed when compared to control. In a study in which albino hairless mice were exposed to both UVR and topically applied calcipotriene, a reduction in the time required for UVR to induce the formation of skin tumors was observed (statistically significant in males only), suggesting that calcipotriene may enhance the effect of UVR to induce skin tumors. Patients that apply calcipotriene to exposed portions of the body should avoid excessive exposure to either natural or artificial sunlight (including tanning booths, sun lamps, etc.). Physicians may wish to avoid use of phototherapy in patients that use calcipotriene.

Calcipotriene did not elicit any mutagenic effects in an Ames mutagenicity assay, a mouse lymphoma TK locus assay, a human lymphocyte chromosome aberration assay, or in a micronucleus assay conducted in mice.

Studies in rats at doses up to 54 mcg/kg/day (324 mcg/m 2/day) of calcipotriene indicated no impairment of fertility or general reproductive performance.

Studies of teratogenicity were done by the oral route where bioavailability is expected to be approximately 40 to 60% of the administered dose. In rabbits, increased maternal and fetal toxicity was noted at 12 mcg/kg/day (132 mcg/m 2/day); a dosage of 36 mcg/kg/day (396 mcg/m 2/day) resulted in a significant increase in the incidences of incomplete ossification of the pubic bones and forelimb phalanges of fetuses. In a rat study, a dosage of 54 mcg/kg/day (318 mcg/m 2/day) resulted in a significantly increased incidence of skeletal abnormalities (enlarged fontanelles and extra ribs). The enlarged fontanelles are most likely due to calcipotriene's effect upon calcium metabolism. The estimated maternal and fetal no-effect exposure levels in the rat (43.2 mcg/m 2/day) and rabbit (17.6 mcg/m 2/day) studies are approximately equal to the expected human systemic exposure level (18.5 mcg/m 2/day) from dermal application. There are no adequate and well-controlled studies in pregnant women. Therefore, Calcipotriene Ointment should be used during pregnancy only if the potential benefit justifies the potential risk to the fetus.

Safety and effectiveness of calcipotriene in pediatric patients have not been established. Because of a higher ratio of skin surface area to body mass, pediatric patients are at greater risk than adults of systemic adverse effects when they are treated with topical medication.

Of the total number of patients in clinical studies of Calcipotriene Ointment, approximately 12% were 65 or older, while approximately 4% were 75 and over. The results of analysis of severity of skin-related adverse events showed a statistically significant difference for subjects over 65 years (more severe) compared to those under 65 years (less severe).

In controlled clinical trials, the most frequent adverse experiences reported for calcipotriene were burning, itching and skin irritation, which occurred in approximately 10 to 15% of patients. Erythema, dry skin, peeling, rash, dermatitis, worsening of psoriasis including development of facial/scalp psoriasis were reported in 1 to 10% of patients. Other experiences reported in less than 1% of patients included skin atrophy, hyperpigmentation, hypercalcemia, and folliculitis. Once daily dosing has not been shown to be superior in safety to twice daily dosing.

Because these reactions are reported voluntarily from a population of uncertain size, it is not always possible to reliably estimate their frequency or establish a causal relationship to drug exposure.

Topically applied calcipotriene can be absorbed in sufficient amounts to produce systemic effects. Elevated serum calcium has been observed with excessive use of Calcipotriene Ointment.

Apply a thin layer of Calcipotriene Ointment once or twice daily and rub in gently and completely.

How is Calcipotriene Ointment Supplied

Calcipotriene Ointment USP, 0.005% is available in: 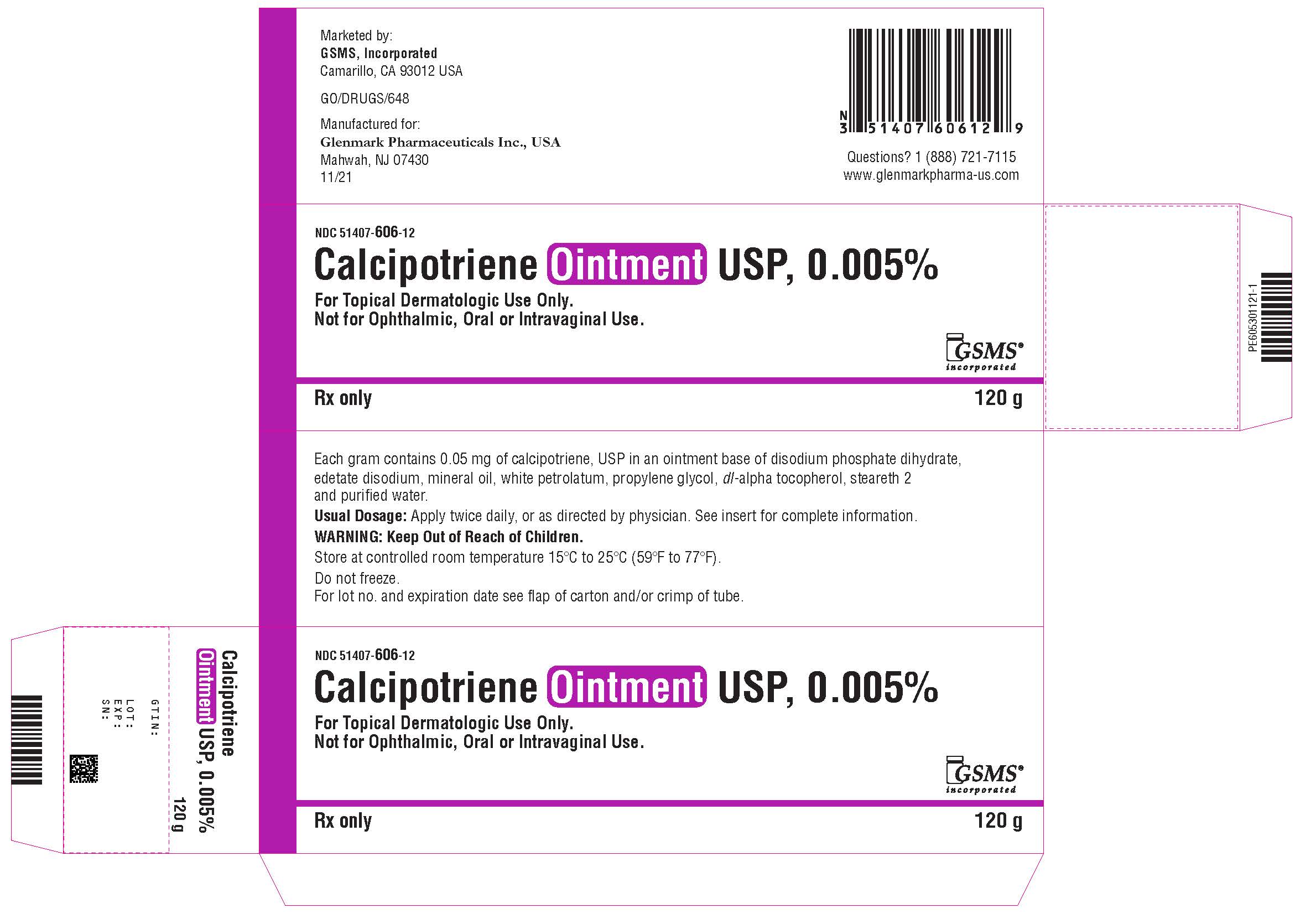