Bumetanide Injection, USP is a potent diuretic which, if given in excessive amounts, can lead to a profound diuresis with water and electrolyte depletion. Therefore, careful medical supervision is required, and dose and dosage schedule have to be adjusted to the individual patient’s needs. (See DOSAGE AND ADMINISTRATION.)

Bumetanide is a loop diuretic, available as 4 mL vials and 10 mL vials (0.25 mg/mL) for intravenous or intramuscular injection as a sterile solution.

Chemically, Bumetanide is 3-(butylamino)-4-phenoxy-5-sulfamoylbenzoic acid. It is a practically white powder, slightly soluble in water, soluble in alkaline solutions, having the following structural formula:


Bumetanide is a loop diuretic with a rapid onset and short duration of action. Pharmacological and clinical studies have shown that 1 mg Bumetanide has a diuretic potency equivalent to approximately 40 mg furosemide. The major site of Bumetanide action is the ascending limb of the loop of Henle.
The mode of action has been determined through various clearance studies in both humans and experimental animals. Bumetanide inhibits sodium reabsorption in the ascending limb of the loop of Henle, as shown by marked reduction of free-water clearance (CH2O) during hydration and tubular free-water reabsorption (TcH2O) during hydropenia. Reabsorption of chloride in the ascending limb is also blocked by Bumetanide, and Bumetanide is somewhat more chloruretic than natriuretic.
Potassium excretion is also increased by Bumetanide, in a dose-related fashion.

Several pharmacokinetic studies have shown that Bumetanide, administered orally or parenterally, is eliminated rapidly in humans, with a half-life of between 1 and 1 ½ hours. Plasma protein binding is in the range of 94% to 96%.

Oral administration of carbon-14 labeled Bumetanide to human volunteers revealed that 81% of the administered radioactivity was excreted in the urine, 45% of it as unchanged drug. Urinary and biliary metabolites identified in this study were formed by oxidation of the N-butyl side chain. Biliary excretion of Bumetanide amounted to only 2% of the administered dose.

Elimination of Bumetanide appears to be considerably slower in neonatal patients compared with adults, possibly because of immature renal and hepatobiliary function in this population. Small pharmacokinetic studies of intravenous Bumetanide in preterm and full-term neonates with respiratory disorders have reported an apparent half-life of approximately 6 hours with a range up to 15 hours and a serum clearance ranging from 0.2 to 1.1 mL/min/kg. In a population of neonates receiving Bumetanide for volume overload, mean serum clearance rates were 2.17 mL/min/kg in patients less than 2 months of age and 3.8 mL/min/kg in patients aged 2 to 6 months. Mean serum half-life of Bumetanide was 2.5 hours and 1.5 hours in patients aged less than 2 months and those aged 2 to 6 months, respectively. Elimination half-life decreased considerably during the first month of life, from a mean of approximately 6 hours at birth to approximately 2.4 hours at 1 month of age.

The degree of protein binding of Bumetanide in cord sera from healthy neonates was approximately 97%, suggesting the potential for bilirubin displacement. A study using pooled sera from critically ill neonates found that Bumetanide at concentrations of 0.5 to 50 mcg/mL, but not 0.25 mcg/mL, caused a linear increase in unbound bilirubin concentrations.

Indications and Usage for Bumetanide

Bumetanide Injection is indicated for the treatment of edema associated with congestive heart failure, hepatic and renal disease, including the nephrotic syndrome.

Almost equal diuretic response occurs after oral and parenteral administration of Bumetanide. Therefore, if impaired gastrointestinal absorption is suspected or oral administration is not practical, Bumetanide should be given by the intramuscular or intravenous route.

Successful treatment with Bumetanide following instances of allergic reactions to furosemide suggests a lack of cross-sensitivity.


Volume and Electrolyte Depletion
The dose of Bumetanide should be adjusted to the patient’s need. Excessive doses or too frequent administration can lead to profound water loss, electrolyte depletion, dehydration, reduction in blood volume and circulatory collapse with the possibility of vascular thrombosis and embolism, particularly in elderly patients.


Hypokalemia
Hypokalemia can occur as a consequence of Bumetanide administration. Prevention of hypokalemia requires particular attention in the following conditions: patients receiving digitalis and diuretics for congestive heart failure, hepatic cirrhosis and ascites, states of aldosterone excess with normal renal function, potassium-losing nephropathy, certain diarrheal states, or other states where hypokalemia is thought to represent particular added risks to the patient, i.e., history of ventricular arrhythmias.
In patients with hepatic cirrhosis and ascites, sudden alterations of electrolyte balance may precipitate hepatic encephalopathy and coma. Treatment in such patients is best initiated in the hospital with small doses and careful monitoring of the patient’s clinical status and electrolyte balance. Supplemental potassium and/or spironolactone may prevent hypokalemia and metabolic alkalosis in these patients.


Ototoxicity
In cats, dogs and guinea pigs, Bumetanide has been shown to produce ototoxicity. In these test animals Bumetanide was 5 to 6 times more potent than furosemide and, since the diuretic potency of Bumetanide is about 40 to 60 times furosemide, it is anticipated that blood levels necessary to produce ototoxicity will rarely be achieved. The potential exists, however, and must be considered a risk of intravenous therapy, especially at high doses, repeated frequently in the face of renal excretory function impairment. Potentiation of aminoglycoside ototoxicity has not been tested for Bumetanide. Like other members of this class of diuretics, Bumetanide probably shares this risk.


Allergy to Sulfonamides
Patients allergic to sulfonamides may show hypersensitivity to Bumetanide.

Serum potassium should be measured periodically and potassium supplements or potassium-sparing diuretics added if necessary. Periodic determinations of other electrolytes are advised in patients treated with high doses or for prolonged periods, particularly in those on low salt diets.

Hyperuricemia may occur; it has been asymptomatic in cases reported to date. Reversible elevations of the BUN and creatinine may also occur, especially in association with dehydration and particularly in patients with renal insufficiency. Bumetanide may increase urinary calcium excretion with resultant hypocalcemia.

Diuretics have been shown to increase the urinary excretion of magnesium; this may result in hypomagnesemia.

Studies in normal subjects receiving Bumetanide revealed no adverse effects on glucose tolerance, plasma insulin, glucagon and growth hormone levels, but the possibility of an effect on glucose metabolism exists. Periodic determinations of blood sugar should be done, particularly in patients with diabetes or suspected latent diabetes.

Patients under treatment should be observed regularly for possible occurrence of blood dyscrasias, liver damage or idiosyncratic reactions, which have been reported occasionally in foreign marketing experience. The relationship of these occurrences to Bumetanide use is not certain.

Especially in the presence of impaired renal function, the use of parenterally administered Bumetanide in patients to whom aminoglycoside antibiotics are also being given should be avoided, except in life-threatening conditions.

There has been no experience with the concurrent use of Bumetanide with drugs known to have a nephrotoxic potential. Therefore, the simultaneous administration of these drugs should be avoided.

Lithium should generally not be given with diuretics (such as Bumetanide) because they reduce its renal clearance and add a high risk of lithium toxicity.

Pretreatment with probenecid reduces both the natriuresis and hyperreninemia produced by Bumetanide. This antagonistic effect of probenecid on Bumetanide natriuresis is not due to a direct action on sodium excretion but is probably secondary to its inhibitory effect on renal tubular secretion of Bumetanide.

Thus, probenecid should not be administered concurrently with Bumetanide.

Indomethacin blunts the increases in urine volume and sodium excretion seen during Bumetanide treatment and inhibits the Bumetanide-induced increase in plasma renin activity. Concurrent therapy with Bumetanide is thus not recommended.

Bumetanide may potentiate the effect of various antihypertensive drugs, necessitating a reduction in the dosage of these drugs.

Interaction studies in humans have shown no effect on digoxin blood levels.

Interaction studies in humans have shown Bumetanide to have no effect on warfarin metabolism or on plasma prothrombin activity.


Bumetanide was devoid of mutagenic activity in various strains of Salmonella typhimurium when tested in the presence or absence of an in vitro metabolic activation system. An 18-month study showed an increase in mammary adenomas of questionable significance in female rats receiving oral doses of 60 mg/kg/day (2000 times a 2 mg human dose). A repeat study at the same doses failed to duplicate this finding.
Reproduction studies were performed to evaluate general reproductive performance and fertility in rats at oral dose levels of 10, 30, 60 or 100 mg/kg/day. The pregnancy rate was slightly decreased in the treated animals; however, the differences were small and not statistically significant.

Bumetanide is neither teratogenic nor embryocidal in mice when given in doses up to 3400 times the maximum human therapeutic dose.

In rabbits, a dose-related decrease in litter size and an increase in resorption rate were noted at oral doses of 0.1 and 0.3 mg/kg/day (3.4 and 10 times the maximum human therapeutic dose). A slightly increased incidence of delayed ossification of sternebrae occurred at 0.3 mg/kg/day; however, no such adverse effects were observed at the dose of 0.03 mg/kg/day. The sensitivity of the rabbit to Bumetanide parallels the marked pharmacologic and toxicologic effects of the drug in this species.

There are no adequate and well-controlled studies in pregnant women. A small investigational experience in the United States and marketing experience in other countries to date have not indicated any evidence of adverse effects on the fetus, but these data do not rule out the possibility of harmful effects. Bumetanide should be given to a pregnant woman only if the potential benefit justifies the potential risk to the fetus.

Safety and effectiveness in pediatric patients below the age of 18 have not been established.

In vitro studies using pooled sera from critically ill neonates have shown Bumetanide to be a potent displacer of bilirubin (see CLINICAL PHARMACOLOGY, Pediatric Pharmacology). The administration of Bumetanide could present a particular concern if given to critically ill or jaundiced neonates at risk for kernicterus.

Clinical studies of Bumetanide did not include sufficient numbers of subjects aged 65 and over to determine whether they responded differently from younger subjects. Other reported clinical experience has not identified differences in responses between the elderly and younger patients. In general, dose selection for an elderly patient should be cautious, usually starting at the low end of the dosing range, reflecting the greater frequency of decreased hepatic, renal, or cardiac function, and of concomitant disease or other drug therapy.

The most frequent clinical adverse reactions considered probably or possibly related to Bumetanide are muscle cramps (seen in 1.1% of treated patients), dizziness (1.1%), hypotension (0.8%), headache (0.6%), nausea (0.6%), and encephalopathy (in patients with preexisting liver disease) (0.6%). One or more of these adverse reactions have been reported in approximately 4.1% of Bumetanide-treated patients.

Also reported have been thrombocytopenia (0.2%) and deviations in hemoglobin (0.8%), prothrombin time (0.8%), hematocrit (0.6%), WBC (0.3%) and differential counts (0.1%). There have been rare spontaneous reports of thrombocytopenia from postmarketing experience.

Dosage should be individualized with careful monitoring of patient response.

Bumetanide Injection may be administered parenterally (IV or IM) to patients in whom gastrointestinal absorption may be impaired or in whom oral administration is not practical.

The usual initial dose is 0.5 to 1 mg intravenously or intramuscularly. Intravenous administration should be given over a period of 1 to 2 minutes. If the response to an initial dose is deemed insufficient, a second or third dose may be given at intervals of 2 to 3 hours, but should not exceed a daily dosage of 10 mg.

The compatibility tests of Bumetanide injection with 5% Dextrose Injection in Water, 0.9% Sodium Chloride Injection, and Lactated Ringer’s Injection in both glass and plasticized PVC (Viaflex) containers have shown no significant absorption effect with either containers, nor a measurable loss of potency due to degradation of the drug. However, solutions should be freshly prepared and used within 24 hours.

How is Bumetanide Supplied

This container closure is not made with natural rubber latex. 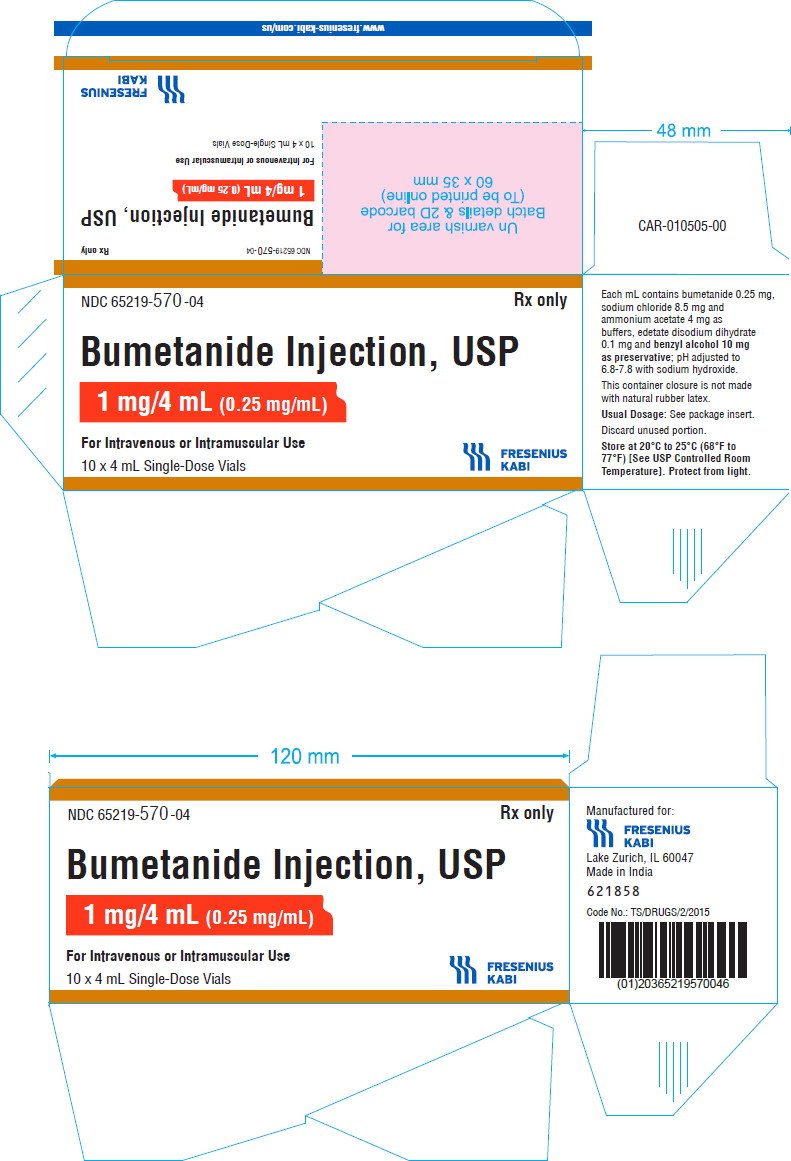 For Intravenous or
Intramuscular Use

For Intravenous or Intramuscular Use 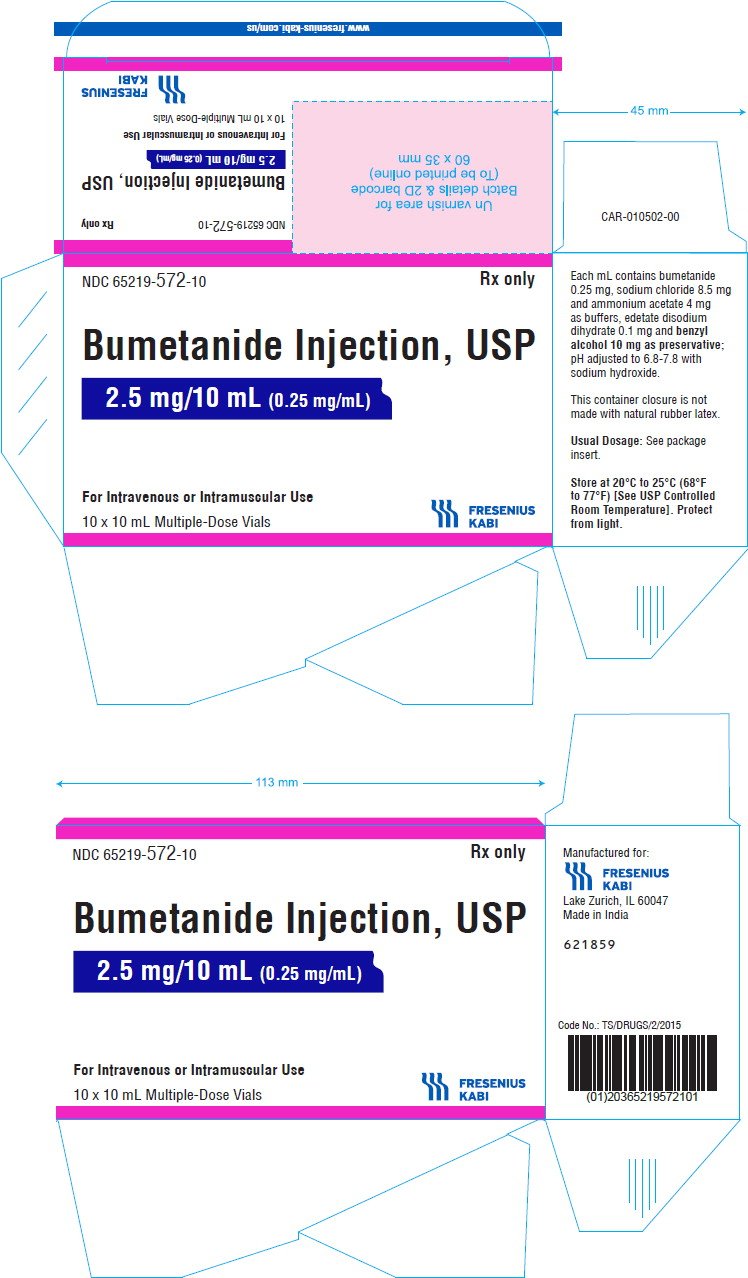 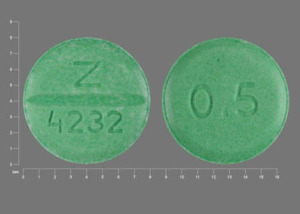