Balsalazide Disodium Tablets is indicated for the treatment of mildly to moderately active ulcerative colitis in male patients 18 years of age and older.

The dose is three 1.1 g Balsalazide Disodium Tablets to be taken 2 times a day with or without food (6.6 g per day) for up to 8 weeks.

Balsalazide Disodium Tablets is available as yellow colored, oval shaped, biconvex, film-coated tablets debossed with “P” on one side and “840” on other side.

Balsalazide is converted to mesalamine, which has been associated with an acute intolerance syndrome that may be difficult to distinguish from an exacerbation of ulcerative colitis. In controlled clinical trials with balsalazide disodium in adults with ulcerative colitis, 7% of male patients reported exacerbation of the symptoms of ulcerative colitis. Symptoms include cramping, acute abdominal pain and bloody diarrhea, sometimes fever, headache, and rash. Observe patients closely for worsening of these symptoms while on treatment. If acute intolerance syndrome is suspected, promptly discontinue treatment with balsalazide disodium.

Renal impairment, including minimal change nephropathy, acute and chronic interstitial nephritis and renal failure, has been reported in patients given products that release mesalamine in the gastrointestinal tract. Evaluate renal function prior to initiation of balsalazide disodium tablets therapy and periodically while on therapy. Exercise caution when using balsalazide disodium tablets in patients with known renal dysfunction or a history of renal disease.

Use in Hepatic Impairment

Adverse reactions occurring in at least 2% of male patients and at a rate numerically higher than placebo in the placebo-controlled trial are listed in Table 1.

The following adverse reactions, presented by body system, were reported by less than 1% of balsalazide disodium-treated ulcerative colitis patients in controlled trials.

Because these reactions are reported voluntarily from a population of unknown size, it is not always possible to reliably estimate their frequency or establish a causal relationship to drug exposure. These adverse reactions have been chosen for inclusion due to a combination of seriousness, frequency of reporting, or potential causal connection to products which contain or are metabolized to mesalamine, including balsalazide.

Respiratory: alveolitis, pleural effusion, pneumonia (with and without eosinophilia)

Pregnancy Category B. Reproduction studies were performed in rats and rabbits at oral doses up to 2 g/kg/day, 2.5 and 4.9 times the recommended human dose based on body surface area for the rat and rabbit, respectively, and revealed no evidence of impaired fertility or harm to the fetus due to balsalazide disodium. There are, however, no adequate and well-controlled studies in pregnant women. Because animal reproduction studies are not always predictive of human response, this drug should be used during pregnancy only if clearly needed.

Mesalamine, a metabolite of balsalazide disodium, is known to cross the placental barrier.

Safety and effectiveness of balsalazide disodium in pediatric patients have not been established.

Reports from uncontrolled clinical studies and postmarketing reporting systems suggested a higher incidence of blood dyscrasias, i.e., neutropenia and pancytopenia, in patients who were 65 years or older who were taking mesalamine-containing products. Balsalazide disodium is converted into mesalamine in the colon. Caution should be taken to closely monitor blood cell counts during therapy.

Clinical trials of balsalazide disodium did not include sufficient numbers of subjects aged 65 and over to determine whether they respond differently than younger subjects. Other reported clinical experience has not identified differences in responses between elderly and younger patients. In general, the greater frequency of decreased hepatic, renal, or cardiac function, and of concomitant disease or other drug therapy in elderly patients should be considered when prescribing balsalazide disodium.

No case of overdose has been reported with balsalazide disodium tablets. Balsalazide disodium is an aminosalicylate, and symptoms of salicylate toxicity include: hematemesis, tachypnea, hyperpnea, tinnitus, deafness, lethargy, seizures, confusion, or dyspnea. Severe intoxication may lead to electrolyte and blood pH imbalance and potentially to other organ (e.g., renal and liver) involvement. There is no specific antidote for balsalazide overdose. Proper medical care should be sought immediately with appropriate supportive care, including the possible use of emesis, cathartics, and activated charcoal to prevent further absorption.

Balsalazide disodium is a stable, odorless, yellow to orange crystalline powder. It is insoluble in acid, but soluble at a pH of at least 4.5. It is freely soluble in water and isotonic saline, sparingly soluble in methanol and ethanol, and practically insoluble in all other organic solvents.

Balsalazide is a prodrug of mesalamine (5-aminosalicylic acid, 5-ASA). The mechanism of action of 5-ASA is unknown, but appears to be local to the colonic mucosa rather than systemic. Mucosal production of arachidonic acid metabolites, both through the cyclooxygenase pathways, i.e., prostanoids, and through the lipoxygenase pathways, i.e., leukotrienes and hydroxyeicosatetraenoic acids, is increased in patients with ulcerative colitis, and it is possible that 5-ASA diminishes inflammation by blocking production of arachidonic acid metabolites in the colon.

Following oral administration, balsalazide is cleaved by azoreductases produced by anaerobic bacteria found in the gut, to release equimolar quantities of 5-ASA, the active moiety, and 4-aminobenzoyl-ß-alanine (4-ABA), a carrier moiety. Both of these moieties are N-acetylated to form N-Ac-5-ASA and N-Ac-4-ABA, respectively.

After single-dose administration of 3.3 g balsalazide disodium tablets in 18 healthy subjects, the median time of peak plasma concentration (Tmax) was 0.5 hr for balsalazide, while the median Tmax was 12 hr for both 5-ASA and N-Ac-5-ASA (Table 2). Pharmacokinetic parameters exhibited high variability, with %CV ranging from 31% to 67% for AUC and from 27% to 68% for Cmax.

Pharmacokinetics were also estimated in healthy volunteers after repeated doses of 3.3 g balsalazide disodium tablets every 12 hours for 7 days. After multiple doses, steady-state was achieved after about 3 days for balsalazide and all metabolites. The AUC and Cmax were the highest for N-Ac-5-ASA, followed by 5-ASA and balsalazide. There was minimal accumulation of balsalazide, as suggested by a 1.2-fold increase in AUC; however, a relatively larger increase in the systemic exposure to metabolites was observed at steady-state. The accumulation ratios based on AUC for the metabolites were 6.1 for 5-ASA, 3.6 for N-Ac-5-ASA, 4.8 for 4-ABA, and 3.6 for N-Ac-4-ABA.

a Expressed as median and range.

Following oral administration, balsalazide is cleaved by bacterial azoreduction to release equimolar quantities of 5-ASA, the active moiety, and 4-ABA, a carrier moiety. Mesalamine (5-ASA) and 4-ABA are further acetylated to N-Ac-5-ASA and N-Ac-4-ABA, respectively in the intestinal mucosa and liver. The terminal half-life was 1.9 h for balsalazide, 9.5 h for 5-ASA, and 10.5 h for N-Ac-5-ASA.

In a 24-month rat (Sprague Dawley) carcinogenicity study, oral (dietary) balsalazide disodium at doses up to 2 g/kg/day was not tumorigenic. For a 50 kg person of average height this dose represents 2.5 times the recommended human dose on a body surface area basis. Balsalazide disodium was not genotoxic in the following in vitro or in vivo tests: Ames test, human lymphocyte chromosomal aberration test, and mouse lymphoma cell (L5178Y/TK+/-) forward mutation test, or mouse micronucleus test. However, it was genotoxic in the in vitro Chinese hamster lung cell (CH V79/HGPRT) forward mutation test.

A double-blind, placebo-controlled, multi-center trial was conducted in 250 adult patients with mildly to moderately active ulcerative colitis. The trial population was primarily white (84%), had a mean age of 44 years (7% age 65 years or older), and 49% were men. Disease activity was assessed using a modified Mayo Disease Activity Index1 (MMDAI), which was a sum of four subscores (bowel frequency, rectal bleeding, endoscopic appearance, and physician’s global assessment), each ranging from 0 to 3, with higher scores indicating worse disease. The median baseline MMDAI score was 8 and the median baseline rectal bleeding subscore was 2. Patients were randomized 2:1 to receive 8 weeks of treatment with either balsalazide disodium tablets 3.3 g twice daily or placebo.

The primary efficacy endpoint was the proportion of patients that achieved clinical improvement and improvement in the rectal bleeding subscale of the MMDAI at the end of 8 weeks of treatment. Clinical Improvement was defined as having both a ≥ 3 point improvement from baseline in the MMDAI score and a ≥ 1 point improvement from baseline in the rectal bleeding subscore. Two key secondary efficacy endpoints were the proportion of patients with Clinical Remission and Mucosal Healing at the end of 8 weeks of treatment. Clinical Remission was defined as a score of 0 for rectal bleeding and a combined score of ≤ 2 for bowel frequency and physician’s assessment using the MMDAI subscale; the endoscopic sub-score was not considered in this definition. Mucosal Healing was defined as an endoscopy/sigmoidoscopy score of 0 or 1, where a score of 1 could include signs of erythema or decreased vascular pattern; by definition, the presence of friability indicated a score of 2 or 3.

After 8 weeks of treatment, the proportion of patients who met the definition of Clinical Improvement was greater for the balsalazide disodium tablets-treated group compared to the placebo group (Table 3).

Table 3: Proportion of Patients with Clinical Improvement* at Week 8

for the Total Population and by Gender Subgroups

Balsalazide Disodium Tablets are available as yellow colored, oval shaped, biconvex, film-coated tablets debossed with “P” on one side and “840” on other side. 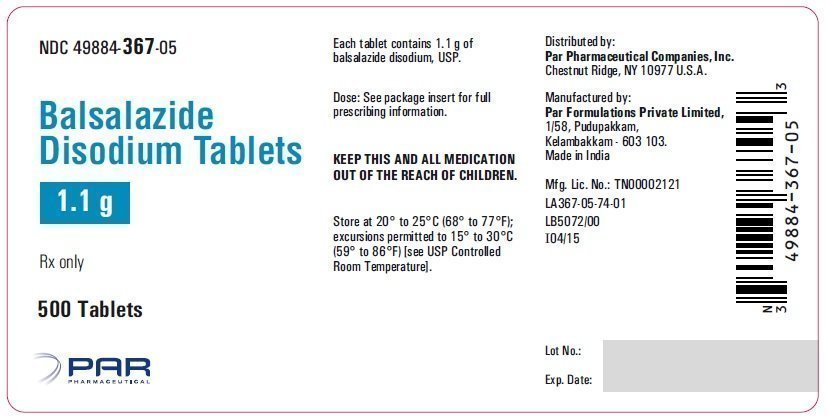