AVC® is a preparation for vaginal administration for the treatment of Candida albicans infections and available in the following form:

Sulfanilamide.....15.0%
in a water-miscible, non-staining base made from lactose, propylene glycol, stearic acid, diglycol stearate, methylparaben, propylparaben, trolamine, and water; buffered with lactic acid to an acid pH of approximately 4.3.

Sulfanilamide is an anti-infective agent. It is p-amino-benzenesulfonamide with the chemical structure:

Sulfanilamide occurs as a white odorless crystalline powder with a slightly bitter taste and sweet aftertaste. It is slightly soluble in water, alcohol, acetone, glycerin, propylene glycol, hydrochloric acid, and solutions of potassium and sodium hydroxide. It is practically insoluble in chloroform, ether, benzene, and petroleum ether.

Sulfanilamide has been a useful ingredient of vaginal formulations for about four decades. It blocks certain metabolic processes essential for the growth of susceptible bacteria. In AVC, the sulfanilamide is in a specially compounded base buffered to the pH (about 4.3) of the normal vagina to encourage the presence of the normally occurring Döderlein’s bacilli of the vagina.

The use of AVC for the treatment of vulvovaginitis caused by Candida albicans is supported by three clinical investigations. The three studies show AVC with sulfanilamide to be significantly more effective (p ≤ 0.01) than placebo as follows:

In Study I, the ratio of effectiveness was 71% for the AVC with sulfanilamide versus 49% for placebo with 30 days of treatment;

In Study II, the percentages were 48% and 24%, respectively, with 15 days of treatment;

In Study III, the percentages were 66% versus 33%, respectively, with 30 days of treatment.

Indications and Usage for AVC

For the treatment of vulvovaginitis caused by Candida albicans. (See CLINICAL PHARMACOLOGY.)

AVC should not be used in patients known to be sensitive to this product or to the sulfonamides.

Because sulfonamides are absorbed from the vaginal mucosa, the usual precautions for oral sulfonamides apply. Patients should be observed for skin rash or evidence of systemic toxicity, and if these develop, the medications should be discontinued.

Deaths associated with administration of oral sulfonamides have reportedly occurred from hypersensitivity reactions, agranulocytosis, aplastic anemia, and other blood dyscrasias.

Goiter production, diuresis, and hypoglycemia have reportedly occurred rarely in patients receiving oral sulfonamides. Cross-sensitivity may exist with these agents. Rats appear to be especially susceptible to the goitrogenic effects of sulfonamides, and long-term administration has reportedly produced thyroid malignancies in this species.

Vaginal applicators or inserters should be used with caution after the seventh month of pregnancy.

The doctor should advise the patient that in the event unusual local itching and burning occur, or other unusual symptoms develop, medication should be discontinued and not restarted without further consultation.

Drug interactions have not been documented with AVC.

No data are available on long-term potential of AVC for carcinogenicity, mutagenicity, or impairment of fertility in animals or humans.

Sulfonamides, including sulfanilamide, readily pass through the placenta and reach fetal circulation. The concentration in the fetus is from 50-90% of that in the maternal blood and if high enough, can cause toxic effects. The safe use of sulfonamides, including sulfanilamide, in pregnancy has not been established. The teratogenic potential of most sulfonamides has not been thoroughly investigated in either animals or humans. However, a significant increase in the incidence of cleft palate and other bony abnormalities of offspring has been observed with certain sulfonamides of the short-, intermediate- and long-acting types (including sulfanilamide) when given to pregnant rats and mice at high oral doses (seven to 25 times the human therapeutic oral dose.)

Safety and effectiveness of AVC in pediatric patients have not been established.

Treatment should be discontinued if either local or systemic manifestations of sulfonamide toxicity or sensitivity occur.

Tolerance, abuse, or dependence with AVC have not been reported.

There have been no reports of accidental overdosage with AVC.

The minimum human lethal dose of AVC has not been established.

It is not known if AVC is dialyzable.

One applicatorful (about 6 g) intravaginally once or twice daily. Improvements in symptoms should occur within a few days, but treatment should be continued for a period of 30 days.

Douching with a suitable solution before insertion may be recommended for hygienic purposes.

How is AVC Supplied

Store at room temperature, below 86°F.

Product darkens with age. Potency is maintained throughout labeled shelf life when stored as directed.

This leaflet provides a summary of the important information about AVC Cream. You can get more information by calling the toll free number (1-877-999-8403).

AVC is a registered trademark of Meda Pharma S.A.R.L., a Mylan company.

Contains: sulfanilamide 15% in a water-miscible, non-staining base made from lactose,
propylene glycol, stearic acid, diglycol stearate, methylparaben, propylparaben, trolamine,
and water; buffered with lactic acid to an acid pH of approximately 4.3.

Usual dose: 1 applicatorful (about 6 g) intravaginally once or twice daily. Improvements in
symptoms should occur within a few days, but treatment should be continued for a
period of 30 days.

How to use cream applicator:

1.
Remove cap from tube. Invert cap and puncture seal of tube with point on top of cap.
2.
Screw plastic applicator on tube as far as it will go.
3.
Pull out plunger (inner rod) of applicator until it stops.

4.
Hold plunger out by placing thumb and forefinger on rod where it enters the barrel (outer cylinder). Squeeze tube from bottom with other hand until barrel is completely filled. Unscrew tube from applicator.

5.
Lying on your back, insert applicator into vagina as far as it will go comfortably without using force. Slowly push in plunger of applicator until it stops automatically.
6.
Carefully remove applicator from vagina, holding it by the barrel (outer cylinder). 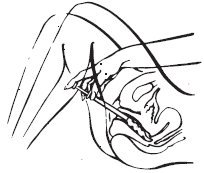 7.
Wash applicator with warm, soapy water (do not boil). For easy cleaning, it may be disassembled by pulling plunger from barrel. Rinse and dry.

It is recommended that a pad be used to protect clothing.

Storage: Store at room temperature (below 86ºF).
Protect from cold.

Directions for use of applicator are printed under tear-away panel of carton.

Storage: Store at room temperature (below 86ºF).
Protect from cold.

Product darkens with age. Potency is maintained throughout labeled shelf life when stored as directed.

AVC is a registered trademark of Meda Pharma S.A.R.L., a Mylan
company 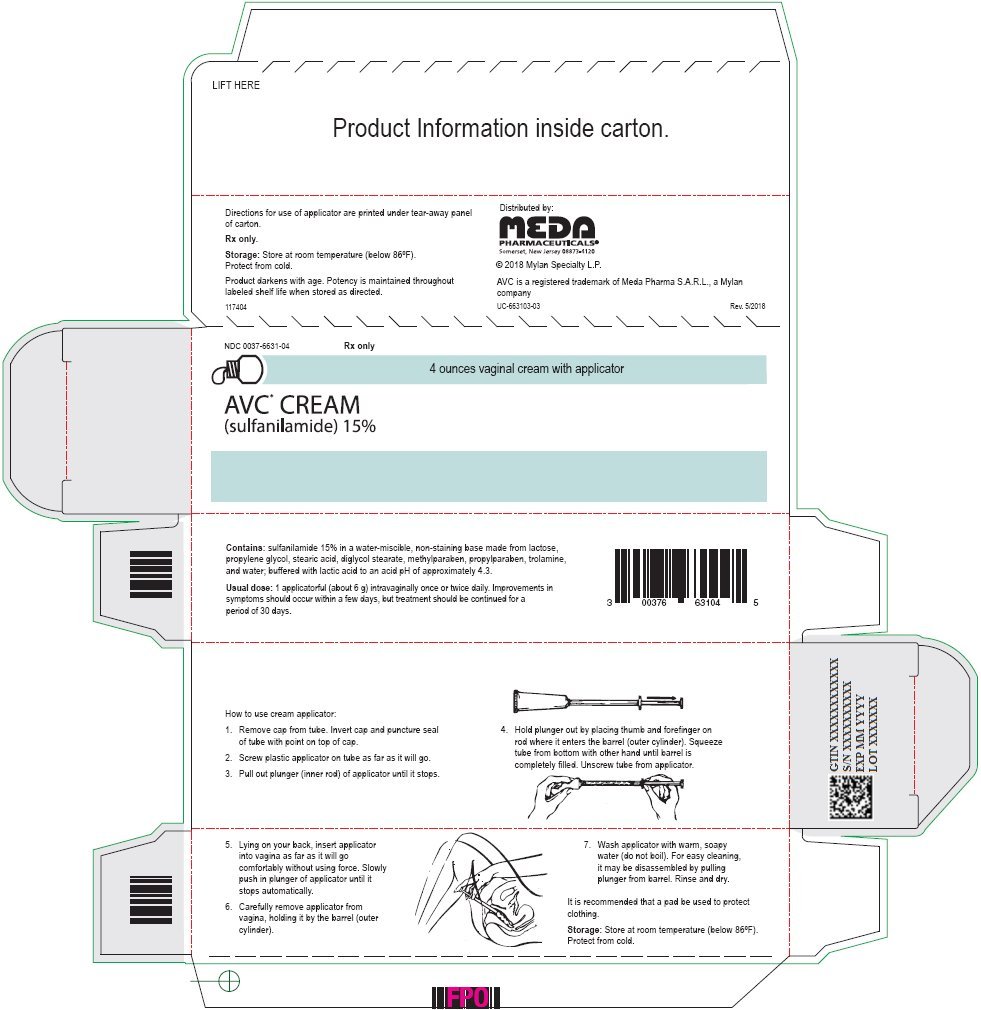