Aczone® Gel, 5%, is indicated for the topical treatment of acne vulgaris.

For topical use only. Not for oral, ophthalmic, or intravaginal use.

If there is no improvement after 12 weeks, treatment with Aczone Gel, 5%, should be reassessed.

Gel, 5%. Each gram of Aczone gel contains 50 mg of dapsone in a white to pale yellow gel.

Dapsone can cause elevated methemoglobin levels particularly in conjunction with methemoglobin‐inducing agents.

Oral dapsone treatment has produced dose-related hemolysis and hemolytic anemia. Individuals with glucose-6-phosphate dehydrogenase (G6PD) deficiency are more prone to hemolysis with the use of certain drugs. G6PD deficiency is most prevalent in populations of African, South Asian, Middle Eastern, and Mediterranean ancestry.

Some subjects with G6PD deficiency using Aczone Gel developed laboratory changes suggestive of hemolysis. There was no evidence of clinically relevant hemolysis or anemia in patients treated with Aczone Gel, 5%, including patients who were G6PD deficient.

Serious adverse reactions reported in subjects treated with Aczone Gel, 5%, during clinical trials included but were not limited to the following:

Aczone Gel, 5%, was evaluated for 12 weeks in four controlled trials for local cutaneous events in 1819 subjects. The most common events reported from these studies include oiliness/peeling, dryness, and erythema. These data are shown by severity in Table 1 below.

The adverse reactions occurring in at least 1% of subjects in either arm in the four vehicle controlled trials are presented in Table 2.

One subjects treated with Aczone Gel in the clinical trials had facial swelling which led to discontinuation of medication.

In addition, 486 subjects were evaluated in a 12 month safety trial. The adverse event profile in this trial was consistent with that observed in the vehicle-controlled trials.

6.2 Experience with Oral Use of Dapsone

Because these reactions are reported voluntarily from a population of uncertain size, it is not always possible to reliably estimate their frequency or establish a causal relationship to drug exposure.

The following adverse reactions have been identified during post-approval use of topical dapsone:

Topical application of Aczone Gel followed by benzoyl peroxide in subjects with acne vulgaris resulted in a temporary local yellow or orange discoloration of the skin and facial hair (reported by 7 out of 95 subjects in a clinical study) with resolution in 4 to 57 days.

Certain concomitant medications (such as rifampin, anticonvulsants, St. John’s wort) may increase the formation of dapsone hydroxylamine, a metabolite of dapsone associated with hemolysis. With oral dapsone treatment, folic acid antagonists such as pyrimethamine have been noted to possibly increase the likelihood of hematologic reactions.

7.4 Concomitant Use with Drugs that Induce Methemoglobinemia

Risk Summary
There are no available data on Aczone Gel, 5%, use in pregnant women to inform a drug-associated risk for adverse developmental outcomes. In animal reproduction studies, oral doses of dapsone administered to pregnant rats and rabbits during organogenesis that resulted in systemic exposures more than 250 times the systemic exposure at the maximum recommended human dose (MRHD) of Aczone Gel, 5%, resulted in embryocidal effects. When orally administered to rats from the onset of organogenesis through the end of lactation at systemic exposures approximately 400 times the exposure at the MRHD, dapsone resulted in increased stillbirths and decreased pup weight [see Data].

Data
Animal Data
Dapsone has been shown to have an embryocidal effect in rats and rabbits when administered orally daily to females during organogenesis at dosages of 75 mg/kg/day and 150 mg/kg/day, respectively. These dosages resulted in systemic exposures that represented approximately 956 times [rats] and 289 times [rabbits] the systemic exposure observed in human females as a result of use of the MRHD of Aczone Gel, 5%, based on AUC comparisons. These effects were probably secondary to maternal toxicity.

Dapsone was assessed for effects on perinatal/postnatal pup development and postnatal maternal behavior and function in a study in which dapsone was orally administered to female rats daily beginning on the seventh day of gestation and continuing until the twenty-seventh day postpartum. Maternal toxicity (decreased body weight and food consumption) and developmental effects (increase in stillborn pups and decreased pup weight) were seen at a dapsone dose of 30 mg/kg/day (approximately 382 times the systemic exposure that is associated with the MRHD of Aczone Gel, 5%, based on AUC comparisons). No effects were observed on the viability, physical development, behavior, learning ability, or reproductive function of surviving pups.

Risk Summary
There is no information regarding the presence of topical dapsone in breastmilk, the effects on the breastfed infant, or the effects on milk production. Orally administered dapsone appears in human milk and could result in hemolytic anemia and hyperbilirubinemia especially in infants with G6PD deficiency. Systemic absorption of dapsone following topical application is minimal relative to oral dapsone administration; however, it is known that dapsone is present in human milk following administration of oral dapsone.

Clinical trials of Aczone Gel, 5%, did not include sufficient number of subjects aged 65 and over to determine whether they respond differently from younger subjects.

Aczone Gel, 5% and vehicle were evaluated in a randomized, double-blind, cross-over design clinical trial of 64 subjects with G6PD deficiency and acne vulgaris. Subjects were Black (88%), Asian (6%), Hispanic (2%) or of other racial origin (5%). Blood samples were taken at Baseline, Week 2, and Week 12 during both vehicle and Aczone Gel, 5% treatment periods. There were 56 out of 64 subjects who had a Week 2 blood draw and applied at least 50% of treatment applications. Table 3 contains results from testing of relevant hematology parameters for these two treatment periods. Aczone Gel was associated with a 0.32 g/dL drop in hemoglobin after two weeks of treatment, but hemoglobin levels generally returned to baseline levels at Week 12.

There were no changes from baseline in haptoglobin or lactate dehydrogenase during Aczone or vehicle treatment at either the 2-week or 12-week time point.

The proportion of subjects who experienced decreases in hemoglobin ≥1 g/dL was similar between Aczone Gel, 5% and vehicle treatment (8 of 58 subjects had such decreases during Aczone treatment compared to 7 of 56 subjects during vehicle treatment among subjects with at least one on-treatment hemoglobin assessment). Subgroups based on gender, race, or G6PD enzyme activity did not display any differences in laboratory results from the overall study group. There was no evidence of clinically significant hemolytic anemia in this study. Some of these subjects developed laboratory changes suggestive of hemolysis.

Aczone Gel, 5%, contains dapsone, a sulfone, in an aqueous gel base for topical dermatologic use. Aczone Gel, 5% is a gritty translucent material with visible drug substance particles. Chemically, dapsone has an empirical formula of C12H12N2O2S. It is a white, odorless crystalline powder that has a molecular weight of 248. Dapsone’s chemical name is 4,4’-diaminodiphenylsulfone and its structural formula is:

The mechanism of action of dapsone gel in treating acne vulgaris is not known.

In a long-term safety study of Aczone Gel, 5% treatment, periodic blood samples were collected up to 12 months to determine systemic exposure of dapsone and its metabolites in approximately 500 patients. Based on the measurable dapsone concentrations from 408 patients (M=192, F=216), obtained at month 3, neither gender, nor race appeared to affect the pharmacokinetics of dapsone. Similarly, dapsone exposures were approximately the same between the age groups of 12-15 years (N=155) and those greater than or equal to 16 years (N=253). There was no evidence of increasing systemic exposure to dapsone over the study year in these patients.

In Vivo Activity: No microbiology or immunology studies were conducted during dapsone gel clinical trials.

Drug Resistance: No dapsone resistance studies were conducted during dapsone gel clinical trials. Because no microbiology studies were done, there are no data available as to whether dapsone treatment may have resulted in decreased susceptibility of Propionibacterium acnes, an organism associated with acne, to other antimicrobials that may be used to treat acne. Therapeutic resistance to dapsone has been reported for Mycobacterium leprae, when patients have been treated with oral dapsone.

Dapsone was not carcinogenic to rats when orally administered to females for 92 weeks or males for 100 weeks at dose levels up to 15 mg/kg/day (approximately 231 times the systemic exposure observed in humans as a result of use of the MRHD of Aczone Gel, 5%, based on AUC comparisons).

No evidence of potential to induce carcinogenesis was observed in a dermal study in which dapsone gel was topically applied to Tg.AC transgenic mice for approximately 26 weeks. Dapsone concentrations of 3%, 5%, and 10% were evaluated; 3% material was judged to be the maximum tolerated dosage.

Two randomized, double-blind, vehicle-controlled, clinical trials were conducted to evaluate Aczone Gel, 5%, for the treatment of subjects with acne vulgaris (N=1475 and 1525). The trials were designed to enroll subjects 12 years of age and older with 20 to 50 inflammatory and 20 to 100 non-inflammatory lesions at baseline. In these trials, subjects applied either Aczone Gel, 5%, or vehicle control twice daily for up to 12 weeks. Efficacy was evaluated in terms of success on the Global Acne Assessment Score (no or minimal acne) and in the percent reduction in inflammatory, non-inflammatory, and total lesions.

The Global Acne Assessment Score was a 5-point scale as follows:

The success rates on the Global Acne Assessment Score (no or minimal acne) at Week 12 are presented in Table 4.

Table 5 presents the mean percent reduction in inflammatory, non-inflammatory, and total lesions from baseline to Week 12.

The clinical trials enrolled about equal proportions of male and female subjects. Female subjects tended to have greater percent reductions in lesions and greater success on the Global Acne Assessment Score than males. The breakdown by race in the clinical trials was about 73% Caucasian, 14% Black, 9% Hispanic, and 2% Asian. Efficacy results were similar across the racial subgroups.

Aczone (dapsone) Gel, 5%, is supplied in the following size tubes:

This Patient Information has been approved by the U.S. Food and Drug Administration. Revised: 07/2019

For tropical use only 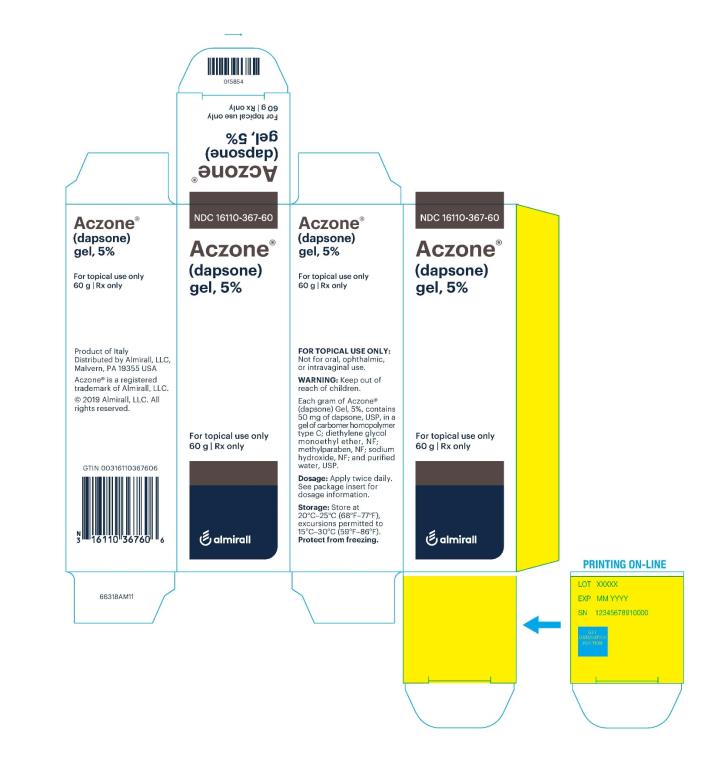 For tropical use only 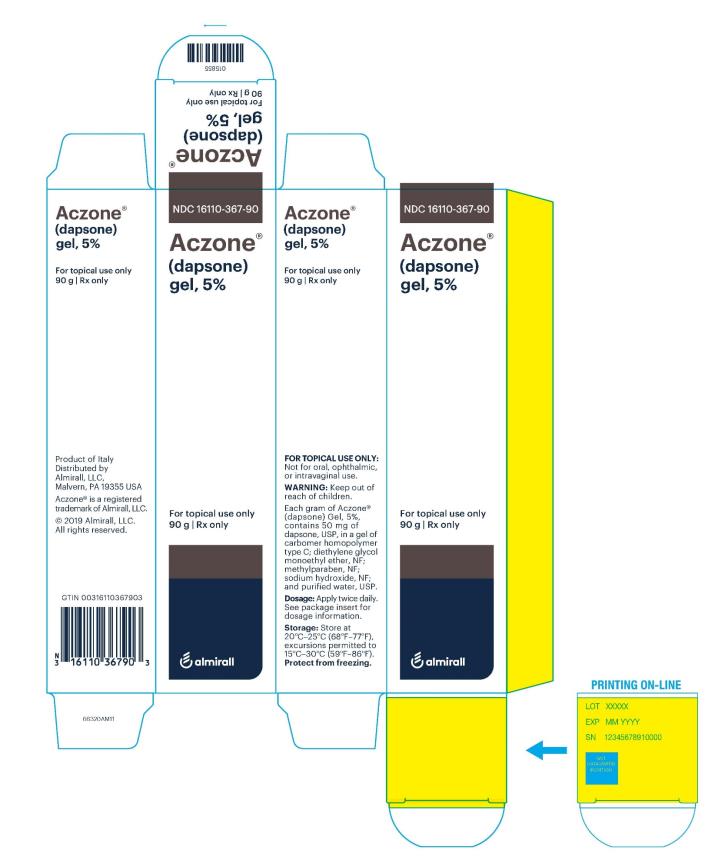