This page contains information on Synotic Otic Solution for veterinary use.
The information provided typically includes the following:

For animal use only

Each mL of the solution contains 0.01% fluocinolone acetonide (6α,9α-difluoro-11β,16α,17,21-tetrahydroxypregna-1,4-diene-3,20-dione, cyclic 16,17-acetal with acetone) and 60% dimethyl sulfoxide in propylene glycol and citric acid.

Fluocinolone acetonide is an odorless crystalline powder essentially white in color. Other physical characteristics include:

The structural formulation is: 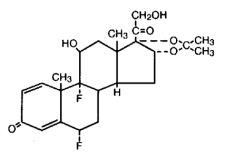 It mixes freely with water with the evolution of heat and lowers the freezing point of aqueous solutions. It is soluble in many other compounds including ethanol, acetone, diethyl ether, glycerin, toluene, benzene and chloroform. DMSO is a solvent for many aromatic and unsaturated hydrocarbons as well as inorganic salts and nitrogen-containing compounds. DMSO has a high dielectric constant due to the polarity of the sulfur-oxygen bond. Its basicity is slightly greater than water due to enhanced electron density at the oxygen atom. It forms crystalline salts with strong protic acids and coordinates with Lewis acids. It modifies hydrogen bonding.

Propylene glycol is well established as being nonsensitizing, nontoxic and has antimicrobial activity. It has been selected for this formulation because of several useful properties: There is a low surface tension permitting great spreadability and penetration; its drying properties make it valuable in moist areas; the corticosteroid is highly soluble and stable in this vehicle; and a relatively slow rate of evaporation maintains the solution state for an adequate time to allow distribution and contact with all parts of the ear.

Fluocinolone acetonide is chemically related to prednisolone and possesses marked anti-inflammatory properties when applied topically. It has been shown to have over 100 times the anti-inflammatory activity of hydrocortisone. Fluocinolone acetonide decreases edema, inflammation, erythema, infiltration and pruritus with its associated scratching and excoriation. Following topical application of fluocinolone acetonide, especially at elevated dosage levels, systemic effects such as some adrenal suppression and weight loss have been observed. These effects, however, have been demonstrated to be reversible.

It has been demonstrated in the human, by both in vivo and in vitro methods, that DMSO enhances the percutaneous absorption of various compounds including steroids, vasoconstrictors, antiperspirants and dyes, as well as an anthelmintic (thiabendazole) and a skin antiseptic (hexachlorophene) (1,2,3,4,5). It was also shown in immature female rats that both estrogens and corticoids applied topically in DMSO exerted some of their usual biological effects (6,7).

Changes in the refractive index of the lens of the eye and nuclear cataracts have been observed in animals with the oral use of DMSO and appeared to be related to high daily doses or a long duration of daily therapy. The lens changes were first observed in dogs receiving 5 g/kg of DMSO orally daily after 9 weeks of administration. Later studies revealed ocular effects at 4.5 mL/kg in 5-9 weeks and at 0.5-1 mL/kg for 19 weeks. These eye changes were slowly reversible but with a definite species difference, the dog being the slowest to exhibit improvement.

In a subsequent study conducted in dogs to determine the effects of a 90% dimethyl sulfoxide solution applied topically at a total daily dose of 20-60 mL for 21 consecutive days, no clinically meaningful ophthalmological effects were noted. No significant variations were observed in hematologic values or in other blood measurements including glucose, BUN, SGOT and plasma electrophoresis.

DMSO may facilitate the systemic absorption of other topically-applied drugs and may have a potentiating effect on drugs administered systemically. Medications containing DMSO as a vehicle should be used judiciously when administered in conjunction with other pharmaceutical preparations especially those affecting the cardiovascular and central nervous systems. Other medication should not be present at the site of its topical application. If other topical medications are indicated they should not be applied until after the medication containing DMSO is thoroughly dry.

DMSO is a potent solvent and may have a deleterious effect upon fabrics, plastics and other materials. Care should be taken to prevent physical contact with SYNOTIC (fluocinolone acetonide and dimethyl sulfoxide) Otic Solution Veterinary when the drug is applied. Contact with the treated area should be avoided until drying of the treated ear canal has occurred.

The intravenous lethal dose of fluocinolone acetonide in 50% aqueous propylene glycol is in excess of 50 mg/kg in mice and rabbits, in excess of 40 mg/kg in dogs, and in excess of 30 mg/kg in rats. The compound induced no pyrogenic response in rabbits nor sensitizing effects in guinea pigs. Gross or histologic effects were not encountered.

The lethal dose orally in dogs and cats exceeds 1 g/kg. There was lymphocytopenia in all animals and erythrocytosis in cats employed in this study.

Two g/kg of 0.05 to 0.2% fluocinolone acetonide applied daily 5 days per week for 3 weeks to the abraded skin of rabbits, resulted in neither local nor systemic toxicity.

Similar applications to intact skin for 13 weeks, including an additional group at 0.025%, resulted only in decreased body weight and adrenal size.

A small decrease in body weight was seen in dogs treated for 7 days with 0.5 mL (15 drops)/ear/day of SYNOTIC (fluocinolone acetonide and dimethyl sulfoxide) Otic Solution Veterinary. In dogs which were treated for 21 days with 1.5 mL (45 drops)/ear/day of this formulation there was a slight loss of weight with changes in the adrenal glands consistent with corticosteroid treatment. This indicates absorption from the dogs’ ears. This absorption, and concomitant effects, are probably enhanced by the action of DMSO.

In a subsequent study, dogs were treated with the recommended therapeutic dose of SYNOTIC Otic Solution Veterinary at the rate of 12 drops (0.4 mL) per ear daily for 21 consecutive days. No significant changes were detected in clinical chemistry, urinalysis, or hematology. A reversible adrenal cortical atrophy with cortical cytoplasmic vacuolization was noted. An equivocal response was noted following ACTH administration on the day after SYNOTIC Otic Solution Veterinary treatment was suspended, but after a one week recovery period, there was a definite eosinophile depression and recovery following ACTH administration, indicating normal adrenal function.

SYNOTIC Otic Solution Veterinary is indicated for the relief of pruritus and inflammation associated with acute and chronic otitis in the dog.

The recommended dose of SYNOTIC Otic Solution Veterinary is 4 to 6 drops (0.2 mL) per ear administered twice daily into the ear canal for a maximum period of 14 days. The total dosage used should not exceed 17 mL. It is recommended that the affected ear canal be cleansed by some appropriate method prior to the instillation of the solution. Following instillation, gentle external massage of the ear canal may aid in promoting an even distribution of the medication. Care should be taken to avoid contact of the medication with the dog’s eyes. Contact of the bare hand with the medication should also be avoided.

A transient, but mild, stinging sensation may be experienced by some animals when the solution is applied to denuded areas. The effect will disappear as healing progresses. A temporary increase in temperature of the area may also be noted.

Corticosteroid therapy will generally cause a remission of signs of allergic origin. However, until the causative agent is identified and removed from the animal’s environment, the condition may recur when therapy is terminated.

Ordinarily, side effects are not encountered with topically applied corticosteroids; but as with all drugs, some animals may exhibit unfavorable local and/or systemic reactions. A local reaction may be due to sensitization to the corticosteroid or one of the other components of the solution.

It is known that DMSO enhances the percutaneous absorption of topically applied corticosteroids and the veterinarian should be aware of possible systemic reactions in this situation. Accordingly, this product is contraindicated wherever systemic corticosteroids would be dangerous. Adrenal suppression, weight loss and increased susceptibility to infections may be evidenced with the use of this drug, especially in overdosage. Therefore, care should be taken to assure that the recommended dosage is not exceeded.

In the presence of local and/or systemic side effects, the drug should be withdrawn. When a local reaction occurs other therapeutic measures should be instituted. Therapy can usually be resumed at a lower dose once systemic signs abate, without further recurrence of the problem.

Absorption of DMSO following topical application may result in an odorous breath described as oyster or garlic-like with an unpleasant taste. Some animals and clients may find this objectionable but these effects are transient and not considered to be of serious consequence.

There should be careful initial evaluation and follow-up of infected ears. Incomplete response or exacerbation of corticosteroid responsive lesions may be due to the presence of an infection which requires identification or antibiotic sensitivity testing, and the use of the appropriate antimicrobial agent. As with any corticosteroid, animals with a generalized infection should not be treated with this product without proper supportive antimicrobial therapy. Preparations with DMSO should not be used in pregnant animals since studies in chick embryos and guinea pigs have indicated it is teratogenic and embryotoxic.

SYNOTIC (fluocinolone acetonide and dimethyl sulfoxide) Otic Solution Veterinary is recommended for topical application to the ear canal of the dog only.

DO NOT ADMINISTER BY ANY OTHER ROUTE.

Clinical and experimental data have demonstrated that corticosteroids administered orally or by injection to animals may induce the first stage of parturition if used during the last trimester of pregnancy and may precipitate premature parturition followed by dystocia, fetal death, retained placenta, and metritis.