This page contains information on Simparica chewable tablets (20 mg) for veterinary use.
The information provided typically includes the following: 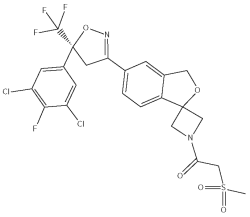 Sarolaner is rapidly and well absorbed following oral administration of SIMPARICA chewable tablets. In a study of 12 Beagle dogs, the mean maximum plasma concentration (Cmax) was 1100 ng/ml and the mean time to maximum concentration (Tmax) occurred at 3 hours following a single oral dose of 2 mg/kg to fasted dogs. The mean oral bioavailability was 86% and 107% in fasted and fed dogs, respectively. The mean oral T1/2 value for fasted and fed dogs was 10 and 12 days respectively.

In a study to simulate a flea-infested home environment, an infestation was established prior to the start of treatment. Dogs were also re-infested with fleas on Days 7, 37 and 67. SIMPARICA chewable tablets administered monthly for three months demonstrated ≥94.3% reduction in adult fleas within 14 days after the first treatment and reached 100% efficacy from Day 60 onward. In a study to explore flea egg production and viability, SIMPARICA chewable tablets killed fleas before they could lay eggs and thus prevented 100% of flea egg production in an existing infestation and against weekly re-infestations for 35 days.

Zoetis® and Simparica are registered trademarks of Zoetis or its licensors.