The originating document has been archived. We cannot confirm the completeness, accuracy and currency of the content.

This page contains information on Enrofloxacin Flavored Tablets for veterinary use.
The information provided typically includes the following:

Enrofloxacin is a synthetic chemotherapeutic agent from the class of the quinolone carboxylic acid derivatives. It has antibacterial activity against a broad spectrum of Gram negative and Gram positive bacteria (See Tables I and II). It is rapidly absorbed from the digestive tract, penetrating into all measured body tissues and fluids (See Table III). Tablets are available in three sizes (22.7, 68.0 and 136.0 mg enrofloxacin).

Microbiology: Quinolone carboxylic acid derivatives are classified as DNA gyrase inhibitors. The mechanism of action of these compounds is very complex and not yet fully understood. The site of action is bacterial gyrase, a synthesis promoting enzyme. The effect on Escherichia coli is the inhibition of DNA synthesis through prevention of DNA supercoiling. Among other things, such compounds lead to the cessation of cell respiration and division. They may also interrupt bacterial membrane integrity.1

Enrofloxacin is bactericidal, with activity against both Gram negative and Gram positive bacteria. The minimum inhibitory concentrations (MICs) were determined for a series of 39 isolates representing 9 genera of bacteria from natural infections in dogs and cats, selected principally because of resistance to one or more of the following antibiotics: ampicillin, cephalothin, colistin, chloramphenicol, erythromycin, gentamicin, kanamycin, penicillin, streptomycin, tetracycline, triple sulfa and sulfa/trimethoprim. The MIC values for enrofloxacin against these isolates are presented in Table I. Most strains of these organisms were found to be susceptible to enrofloxacin in vitro but the clinical significance has not been determined for some of the isolates.

Pharmacokinetics: In dogs, the absorption and elimination characteristics of the oral formulation are linear (plasma concentrations increase proportionally with dose) when enrofloxacin is administered at up to 11.5 mg/kg, twice daily.2 Approximately 80% of the orally administered dose enters the systemic circulation unchanged. The eliminating organs, based on the drug’s body clearance time, can readily remove the drug with no indication that the eliminating mechanisms are saturated. The primary route of excretion is via the urine. The absorption and elimination characteristics beyond this point are unknown. In cats, no oral absorption information is available at other than 2.5 mg/kg, administered orally as a single dose. Saturable absorption and/or elimination processes may occur at greater doses. When saturation of the absorption process occurs, the plasma concentration of the active moiety will be less than predicted, based on the concept of dose proportionality.

Following an oral dose in dogs of 2.5 mg/kg (1.13 mg/lb), enrofloxacin reached 50% of its maximum serum concentration in 15 minutes and peak serum level was reached in one hour. The elimination half-life in dogs is approximately 2 1/2 - 3 hours at that dose, while in cats it is greater than 4 hours. In a study comparing dogs and cats, the peak concentration and the time to peak concentration were not different.

A graph indicating the mean serum levels following a dose of 2.5 mg/kg (1.13 mg/lb) in dogs (oral and intramuscular) and cats (oral) is shown in Figure 1. 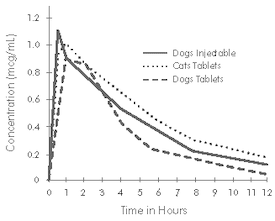 Breakpoint: Based on pharmacokinetic studies of enrofloxacin in dogs and cats after a single oral administration of 2.5 mg enrofloxacin/kg BW (i.e. half of the lowest-end single daily dose range for dogs and half the single daily dose for cats) and the data listed in Tables I and II, the following breakpoints are recommended for canine and feline isolates.

Enrofloxacin is contraindicated in dogs and cats known to be hypersensitive to quinolones.

Dogs: Based on the studies discussed under the section on Animal Safety Summary, the use of enrofloxacin is contraindicated in small and medium breeds of dogs during the rapid growth phase (between 2 and 8 months of age). The safe use of enrofloxacin has not been established in large and giant breeds during the rapid growth phase. Large breeds may be in this phase for up to one year of age and the giant breeds for up to 18 months. In clinical field trials utilizing a daily oral dose of 5.0 mg/kg, there were no reports of lameness or joint problems in any breed. However, controlled studies with histological examination of the articular cartilage have not been conducted in the large or giant breeds.

Dogs: Two of the 270 (0.7%) dogs treated with enrofloxacin at 5.0 mg/kg per day in the clinical field studies exhibited side effects, which were apparently drug-related. These two cases of vomition were self-limiting.

Post-Approval Experience: The following adverse experiences, although rare, are based on voluntary post-approval adverse drug experience reporting. The categories of reactions are listed in decreasing order of frequency by body system.

Cats: No drug-related side effects were reported in 124 cats treated with enrofloxacin at 5.0 mg/kg per day for 10 days in clinical field studies.

Post-Approval Experience: The following adverse experiences, although rare, are based on voluntary post-approval adverse drug experience reporting. The categories of reactions are listed in decreasing order of frequency by body system.

Ocular: Mydriasis, retinal degeneration (retinal atrophy, attenuated retinal vessels, and hyperreflective tapeta have been reported), loss of vision. Mydriasis may be an indication of impending or existing retinal changes.

Cats: Cats in age ranges of 3 to 4 months and 7 to 10 months received daily treatments of 25 mg/kg for 30 consecutive days with no adverse effects upon the clinical chemistry, hematological or histological parameters. In cats 7-10 months of age treated daily for 30 consecutive days, 2 of 4 receiving 5 mg/kg, 3 of 4 receiving 15 mg/kg, 2 of 4 receiving 25 mg/kg and 1 of 4 nontreated controls experienced occasional vomition. Five to 7 month old cats had no side effects with daily treatments of 15 mg/kg for 30 days, but 2 of 4 animals had articular cartilage lesions when administered 25 mg/kg per day for 30 days.

Enrofloxacin was administered to thirty-two (8 per group), six- to eight-month-old cats at doses of 0, 5, 20, and 50 mg/kg of body weight once a day for 21 consecutive days. There were no adverse effects observed in cats that received 5 mg/kg body weight of enrofloxacin. The administration of enrofloxacin at 20 mg/kg body weight or greater caused salivation, vomition, and depression. Additionally, dosing at 20 mg/kg body weight or greater resulted in mild to severe fundic lesions on ophthalmologic examination (change in color of the fundus, central or generalized retinal degeneration), abnormal electroretinograms (including blindness), and diffuse light microscopic changes in the retina.

Compounds that contain metal cations (e.g., aluminum, calcium, iron, magnesium) may reduce the absorption of some quinolone-class drugs from the intestinal tract. Concomitant therapy with other drugs that are metabolized in the liver may reduce the clearance rates of the quinolone and the other drug.

Dogs: Enrofloxacin has been administered to dogs at a daily dosage rate of 10 mg/kg concurrently with a wide variety of other health products including anthelmintics (praziquantel, febantel, sodium disophenol), insecticides (fenthion, pyrethrins), heartworm preventatives (diethylcarbamazine) and other antibiotics (ampicillin, gentamicin sulfate, penicillin, dihydrostreptomycin). No incompatibilities with other drugs are known at this time.

Cats: Enrofloxacin was administered at a daily dosage rate of 5 mg/kg concurrently with anthelmintics (praziquantel, febantel), an insecticide (propoxur) and another antibacterial (ampicillin). No incompatibilities with other drugs are known at this time.

For use in animals only. In rare instances, use of this product in cats has been associated with Retinal Toxicity. Do not exceed 5 mg/kg of body weight per day in cats. Safety in breeding or pregnant cats has not been established. Keep out of reach of children.

Dogs: Administer orally at a rate to provide 5-20 mg/kg (2.27 to 9.07 mg/lb) of body weight. Selection of a dose within the range should be based on clinical experience, the severity of disease, and susceptibility of the pathogen. Animals which receive doses in the upper-end of the dose range should be carefully monitored for clinical signs that may include inappetence, depression, and vomition. If dogs do not consume Enrofloxacin Flavored Tablets willingly when offered by hand, then alternatively the tablet(s) may be offered in food or hand-administered (pilled) as with other oral tablet medications.

All tablet sizes are double scored for accurate dosing.

Cats: Administer orally at 5 mg/kg (2.27 mg/lb) of body weight. The dose for dogs and cats may be administered either as a single daily dose or divided into two (2) equal daily doses administered at twelve (12) hour intervals. The dose should be continued for at least 2-3 days beyond cessation of clinical signs, to a maximum of 30 days. In cats, Enrofloxacin Flavored Tablets should be pilled. After administration, watch the animal closely to be certain the entire dose has been consumed.

All tablet sizes are double scored for accurate dosing.

Dogs & Cats: The duration of treatment should be selected based on clinical evidence. Generally, administration of Enrofloxacin Flavored Tablets should continue for at least 2-3 days beyond cessation of clinical signs. For severe and/or complicated infections, more prolonged therapy, up to 30 days, may be required. If no improvement is seen within five days, the diagnosis should be reevaluated and a different course of therapy considered.

Dispense tablets in tight containers only.