This page contains information on Enroflox Injection For Dogs 2.27% for veterinary use.
The information provided typically includes the following: 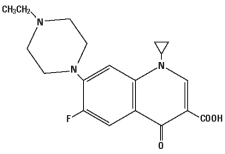 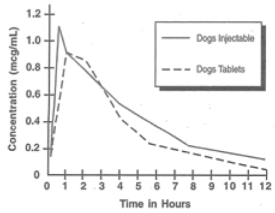 Enroflox® (brand of enrofloxacin) Injectable Solution is indicated for the management of diseases in dogs associated with bacteria susceptible to enrofloxacin.

No drug-related side effects were reported in 122 clinical cases treated with an enrofloxacin injectable solution followed by enrofloxacin tablets at 5.0 mg/kg per day.

Enrofloxacin has been administered to dogs at a daily dosage rate of 10 mg/kg concurrently with a wide variety of other health products including anthelmintics (praziquantel, febantel), insecticides (pyrethrins), heartworm preventatives (diethylcarbamazine) and other antibiotics (ampicillin, gentamicin sulfate, penicillin). No incompatibilities with other drugs are known at this time.

For customer service, to obtain a copy of the Material Safety Data Sheet (MSDS) or to report adverse reactions call Norbrook at 1-866-591-5777.

Enroflox Injection for Dogs may be used as the initial dose at 2.5 mg/kg. It should be administered intramuscularly (IM) as a single dose, followed by initiation of enrofloxacin tablet therapy.

Enroflox Injection for Dogs may be administered as follows:

*The initial Enroflox Injection for Dogs administration should be followed 12 hours later by initiation of enrofloxacin tablet therapy.

Enroflox and the Norbrook logo are registered trademarks of Norbrook Laboratories Limited.