This page contains information on Denamarin Enteric-Coated Tablets for veterinary use.
The information provided typically includes the following:

Available from your veterinarian

Silybin is a biologically active component of an extract from milk thistle known as silymarin,9 and its absorption is enhanced by phosphatidylcholine.10-13 Silybin/silymarin has been shown to have beneficial effects on liver function.14-16

The combination of S-Adenosylmethionine and silybin in Denamarin provides a multi-faceted approach to liver support.

S-Adenosylmethionine has been shown to increase hepatic glutathione levels in cats and dogs.1,3 Glutathione is a potent antioxidant that protects hepatic cells from toxins and death. A study found that low liver glutathione concentrations are common in dogs and cats with decreased hepatobiliary function.17 Denamarin is recommended to improve hepatic glutathione levels in patients to help maintain and protect liver function. Denamarin may also be used in other areas of tissue oxidant injury and RBC fragility caused by certain toxins or drugs which are related to reduced glutathione concentrations.2 Denamarin’s mechanism of action, however, goes beyond increasing glutathione levels, in that S-Adenosylmethionine has also been shown to protect liver cells from cell death5 and may be useful in cell regeneration.2 A study has also shown that S-Adenosylmethionine may improve bile flow in cats.8

In addition to supporting liver health, Denamarin may also support brain health as S-Adenosylmethionine has been shown to function as a neuroprotective agent.4,18,19

Silybin/silymarin has many different mechanisms of action. Studies have shown that it protects against oxidative stress in multiple cell types and species.20-23 A study in cats showed that it increased intracellular glutathione levels in neutrophils and increased phagocytic function.21 Other research has shown that it promotes hepatocyte protein synthesis,24 a mechanism for liver cell regeneration; inhibits IL-1β-induced production of several mediators (PGE2, IL-8, and MCP-1) and translocation of NF-KB (nuclear factor-kappa B), a key signaling agent;25 inhibits leukotriene production,26,27 which can be beneficial as production of leukotrienes is a component of the inflammatory response; stimulates biliary flow and production of hepatoprotective bile salts (e.g., beta-muricholate and ursodeoxycholate);28 and increases levels of glutathione.29

In a study, silybin was shown to be protective in acute Amanita phalloides mushroom poisoning in dogs, where one-third of the untreated dogs died, while all dogs in the silybin-group lived. Silybin-group dogs also had lower bilirubin, AST, ALT, and ALP levels and improved prothrombin times compared to control dogs.15 In another report, the liver enzymes improved in five out of six dogs with 30 days of silymarin administration.16

Results from a clinical trial indicate that Denamarin acts as a hepatoprotectant in dogs undergoing chemotherapy with lomustine (CCNU).30 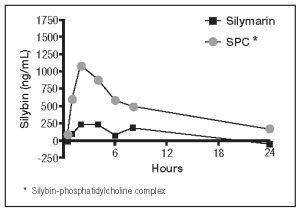 Plasma levels in dogs after oral administration of silymarin versus SPC (silybin-phosphatidylcholine complex). Each was given at the same amount based on silybin content (178 mg).13

There are no known drug interactions or contraindications to the use of silybin/silymarin in animals.33,34 While mild side effects, such as gastrointestinal upset, itching and headache, have been rarely reported in primates,33,35,36 no side effects have been noted in dogs or cats.13,16,33,34,37,38 The specific silybin-phosphatidylcholine complex in Denamarin has been evaluated in both acute and chronic use safety studies: an acute toxicity study in dogs using levels greater than 80x the amount in Denamarin revealed no adverse physiologic effects,38 and a chronic toxicity study in monkeys who received greater than 80x the amount in Denamarin for 26 weeks showed no compound-related adverse effects.35

Administration As A Liver Health Supplement

Because the tablet must be kept intact to prevent destruction by moisture, administration range is based on the nearest whole-tablet. The chart below is provided as a guide for administration.

For optimal absorption, tablets should be given on an empty stomach, at least one hour before feeding, as the presence of food decreases the absorption of S-Adenosylmethionine. For those owners who have difficulty administering tablets to their pets, Denamarin tablet(s) may be disguised in a small bite of food. Studies have shown that, in many cases, tablets or capsules given as a “dry swallow” do not pass into the stomach in cats but may become lodged in the esophagus. It is recommended for pet owners to administer 3-6 cc of water immediately following any tablet administration to speed passage of the tablet into the stomach.39,40 Denamarin for Cats and Small Dogs tablets are ideal for cats because of their small size. If the pet is to receive more than one tablet daily, the total number of tablets may be divided between morning and evening for ease of administration. For example, a daily administration of three tablets could be divided into two tablets in the morning and one tablet in the evening.

For Cats And Small Dogs

*The number of tablets can be gradually reduced or increased at any time depending on the pet’s needs. Many pets are maintained long-term on every-other-day or every-third-day administration.

Store in a cool dry place. Keep tablets in original blister pack until used. Tablets are sensitive to moisture and extreme heat and should not be split or crumbled.

Also available in chewable tablets for dogs. Contact your veterinarian or go to nutramaxlabs.com to learn more.