This page contains information on Banamine Transdermal for veterinary use.
The information provided typically includes the following:

Pour-On for Beef and Dairy Cattle

Only for topical use in beef and dairy cattle. Not for use in beef bulls intended for breeding; dairy bulls; female dairy cattle 20 months of age or older, including dry dairy cows; and suckling beef calves, dairy calves, and veal calves.

Apply only once at a dose of 3.3 mg flunixin per kg body weight (1.5 mg/lb; 3 mL per 100 lbs) topically in a narrow strip along the dorsal midline from the withers to the tailhead. Round all doses up to the nearest weight increment on the dosing chamber. Do not treat cattle if the hide is wet or may get wet in the six hours after dosing because effectiveness has not been evaluated under wet hide conditions.

Practice the Administration and Overfill Reduction Instructions a few times to become familiar with operating the package before dosing animals.

If the dosing chamber is overfilled follow the Overfill Reduction Instructions.

A small amount of liquid will remain on the walls of the chamber, but the chamber is calibrated to account for this. 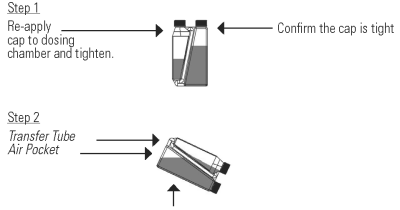 Tilt the bottle to allow an air pocket to form at the beginning of the transfer tube inside the bottle.

Hold the bottle horizontally to allow product to cover the end of the transfer tube inside the dosing chamber.

NSAIDs inhibit production of prostaglandins which are important in signaling the initiation of parturition. The use of flunixin can delay parturition and prolong labor which may increase the risk of stillbirth. Do not use Banamine Transdermal pour-on within 48 hours of expected parturition. Do not use in animals showing hypersensitivity to flunixin meglumine.

USER SAFETY WARNINGS: Not for use in humans. Keep out of reach of children. Flunixin transdermal solution is a potent non-steroidal anti-inflammatory drug (NSAID), and ingestion may cause gastrointestinal irritation and bleeding, kidney, and central nervous system effects.

This product has been shown to cause severe and potentially irreversible eye damage (conjunctivitis, iritis, and corneal opacity) and irritation to skin in laboratory animals. Users should wear suitable eye protection (face shields, safety glasses, or goggles) to prevent eye contact; and chemical resistant gloves and appropriate clothing (such as long-sleeve shirt and pants) to prevent skin contact and/or drug absorption. Wash hands after use.

In case of accidental eye contact, flush eyes immediately with water and seek medical attention. If wearing contact lenses, flush eyes immediately with water before removing lenses. In case of accidental skin contact and/or clothing contamination, wash skin thoroughly with soap and water and launder clothing with detergent. In case of ingestion do not induce vomiting and seek medical attention immediately. Probable mucosal damage may contraindicate the use of gastric lavage. Provide product label and/or package insert to medical personnel.

As a class, cyclo-oxygenase inhibitory NSAIDs may be associated with gastrointestinal, renal, and hepatic toxicity. Sensitivity to drug-associated adverse events varies with the individual patient. Patients at greatest risk for adverse events are those that are dehydrated, on concomitant diuretic therapy, or those with renal, cardiovascular, and/or hepatic dysfunction. Banamine transdermal should be used with caution in animals with suspected pre-existing gastric erosions or ulcerations. Concurrent administration of other NSAIDs, corticosteroids, or potentially nephrotoxic drugs should be avoided or used only with careful monitoring because of the potential increase of adverse events.

NSAIDs are known to have potential effects on both parturition (see Contraindications) and the estrous cycle. There may be a delay in the onset of estrus if flunixin is administered during the prostaglandin phase of the estrous cycle. NSAIDs are known to have the potential to delay parturition through a tocolytic effect. The use of NSAIDs in the immediate post-partum period may interfere with uterine involution and expulsion of fetal membranes. Cows should be monitored carefully for placental retention and metritis if Banamine Transdermal pour-on is used within 24 hours after parturition.

Not for use in dairy or beef bulls intended for breeding because reproductive safety has not been evaluated.

Flunixin meglumine is a nonsteroidal, anti-inflammatory drug. It is a weak acid (pKa=5.82)1 which exhibits a high degree of plasma protein binding (approximately 99%).2 However, free (unbound) drug appears to readily partition into body tissues (Vss predictions range from 297 to 782 mL/kg).2-5 In cattle, elimination occurs primarily through biliary excretion.

Table 1. Average (+/- standard deviation [SD]) PK parameters after a single administration of flunixin transdermal solution at a dose of 2.5 mg/kg in cattle that were either allowed to lick or prevented from allo- and self-licking (n = 24/group).

* First blood level in the licking group was taken at 2 hours post-dose.

Tmax: Time at which Cmax was observed

AUC2-last: Area under the plasma concentration versus time curve measured between 2 hours and the time of the last quantifiable concentration

2. Odensvik K, Johansson M. High-performance liquid chromatography method for determination of flunixin in bovine plasma and pharmacokinetics after single and repeated doses of the drug. Am J Vet Res. 1995; 56:489-495.

TARGET ANIMAL SAFETY: In a target animal safety study in 32 six-month old beef cattle (16 castrated males and 16 females), flunixin transdermal solution was administered topically at 3.3, 9.9, and 16.5 mg/kg body weight (1X, 3X, and 5X the labeled dose) on Days 1, 2, and 3 (3X the labeled administration frequency). Cattle were continuously restrained to prevent licking. In addition, the study was conducted under warm environmental conditions (70 °F to 80 °F on dosing days). One animal in the 3X group and three animals in the 5X group exhibiting twisting, kicking, rubbing on the fence, and or prancing, starting 5 to 15 minutes after dosing and lasting up to an hour after dosing on both Days 2 and 3. Two 5X animals had positive fecal occult blood on one of three post-treatment days, and one 5X animal had positive fecal occult blood on Days 2 and 3 post-treatment. Trace occult blood was found in the urine of three animals: one 5X animal on Day 1, one 5X animal on Day 3, and one 3X animal on Day 3. Test article-related pathology changes included a dose-related increase in the incidence and severity of abomasal erosions and ulcerations; and inflammatory cell infiltrates, epidermal necrosis, and small areas of dermal necrosis at the application site. The abomasal lesions correlated with fecal occult blood in three 5X animals. There were no animals with any other evidence of gastrointestinal bleeding or clinical signs of abomasal ulceration during the study.

In each study, cattle were challenged by subcutaneous injection of a culture of Fusobacterium necrophorum into the interdigital space of the right front foot using a method that was validated to induce pain representative of foot rot. Cattle were enrolled when they demonstrated signs of pain associated with foot rot based on lameness, interdigital lesion, and interdigital swelling criteria. Pressure mat gait parameters maximum total force (kgf) and contact area (cm2) were also measured at enrollment. A total of 30 cattle at each site were administered either flunixin transdermal solution (3.3 mg/kg BW) or an equivalent volume of dyed saline as a pour-on once on Day 0. Six hours after treatment, lameness scores and pressure mat gait parameters maximum total force and contact area were measured.

Changes in biometric gait parameters were also compared between the treatment groups.

For technical assistance or to report a suspected adverse drug experience, call: 1-800-219-9286

For additional information about adverse drug experience reporting for animal drugs, contact FDA at 1-888-FDA-VETS or online at http://www.fda.gov/AnimalVeterinary/SafetyHealth.”

STORAGE INFORMATION: Store at or below 30°C (86°F). Use within 6 months of first opening.

Use Only as Directed