This page contains information on AmiJect D for veterinary use.
The information provided typically includes the following:

Sterile For Use In Dogs Only

Amikacin, like other aminoglycoside antibiotics, is a bactericidal agent that exerts its action at the level of the bacterial ribosome. Amikacin has been shown to be effective against many aminoglycoside-resistant strains due to its ability to resist degradation by aminoglycoside inactivating enzymes known to affect gentamicin, tobramycin and kanamycin(1).

*Concentration at which 90% of the isolates are susceptible

In addition, the following microorganisms have been shown to be susceptible to amikacin in vitro(2), although the clinical significance of this action has not been demonstrated in animals:

The aminoglycoside antibiotics in general have limited activity against gram-positive pathogens, although Staphylococcus aureus and Listeria monocytogenes are susceptible to amikacin as noted above.

Amikacin is well absorbed following intravenous, subcutaneous, or intramuscular injection but is not appreciably absorbed orally. The serum half-life (T1/2) averages from 1 to 2 hours in dogs depending on the route of administration(3). Amikacin is excreted unchanged in urine, concentrations in excess of 1,000 mcg/mL typically being achieved within three hours in dogs. Serum concentration-time profiles in dogs following subcutaneous administration are illustrated graphically in Figure 1. 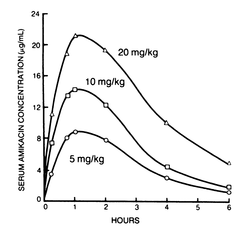 The intravenous and intramuscular LD50 in dogs is greater than 250 mg/kg. Like other aminoglycosides, amikacin has nephrotoxic, neurotoxic, and ototoxic potential. In dogs, minimal to mild renal changes were detectable histopathologically after amikacin dosage of 45 mg/kg/day for two weeks, and dogs receiving a dosage of 30 mg/kg/day for 90 days had minimal renal alterations which were believed to be entirely reversible. Urinary casts were not observed in dogs receiving a 30 mg/kg dose for 90 days. In efficacy studies involving 80 infected dogs treated with amikacin at the recommended dosage rate of 10 mg/kg b.i.d. for 8-21 consecutive days, no evidence of nephrotoxicity or any other toxicity was encountered. Regarding ototoxicity, studies in cats reveal that amikacin has less potential for ototoxicity than gentamicin(4).

AmiJect D (Amikacin Sulfate Injection) is indicated for the treatment of the following conditions in dogs:

While nearly all strains of Escherichia coli, Pseudomonas sp and Proteus sp, including those that are resistant to gentamicin, kanamycin or other aminoglycosides, are susceptible to amikacin at levels achieved following treatment, it is recommended that the invading organism be cultured and its susceptibility demonstrated as a guide to therapy. Amikacin susceptibility discs, 30 mcg, should be used for determining in vitro susceptibility.

The following conditions have been found to contribute to the toxicity of aminoglycosides in dogs:

-Prior renal damage (most commonly found in dogs of advanced age) and dogs infected with heartworm microfilaria.(5)

-Hypovolemic dehydration (dehydrated patients should be rehydrated prior to initiating therapy).

In dogs where decreased renal function is suspected prior to treatment, BUN or serum creatinine levels may not indicate the degree of kidney impairment. A creatinine clearance determination may be more useful.

Monitoring of renal function during treatment is recommended. Although there is not a completely reliable monitoring program for aminoglycoside toxicity, urinalysis may indicate early nephrotoxicity. Unfavorable changes in the urinalysis which may indicate toxicity include:

-Decreased specific gravity in the absence of fluid therapy.

-Appearance in the urine of casts, albumin, glucose or blood.

Continued use of aminoglycosides where any functional renal impairment has occurred may lead to enhanced renal damage as well as increased likelihood of ototoxicity and/or neuromuscular blockade.(6)

Concurrent or sequential use of topically or systemically administered nephrotoxic, ototoxic, or neuromuscular blocking drugs, particularly other aminoglycosides such as streptomycin, gentamicin, kanamycin and neomycin should be avoided because of the potential for additive effects.

Concurrent administration of furosemide with aminoglycosides may enhance nephrotoxicity.(7)

Not for use in breeding dogs as reproductive studies have not been conducted.

Neurotoxic and nephrotoxic antibiotics may be absorbed in significant quantities from body surfaces after local irrigation or application. The potential toxic effect of antibiotics administered in this fashion should be considered.(8)

Amikacin should be used with extreme caution in dogs, in which hearing acuity is required for functioning, such as seeing eye, hearing ear or military patrol, as the auditory and vestibular impairment tends not to be reversible.(6)

Aminoglycosides, including amikacin, are not indicated in uncomplicated episodes of cystitis unless causative agents are susceptible to them and are not susceptible to antibiotics having less potential for toxicity.

Early signs of ototoxicity can include ataxia, nausea and vomiting. Auditory and vestibular impairment may be reversible in the very early stages, but if treatment is continued, the conditions will become irreversible.(6)

In clinical studies in dogs, transient pain on injection has been reported as well as rare cases of vomiting or diarrhea following amikacin therapy. In 90 day intramuscular toxicology studies, evidence of muscle damage was detected histologically as well as by elevated creatinine phosphokinase.

AmiJect D (Amikacin Sulfate Injection) should be administered subcutaneously or intramuscularly at a dosage of 10 mg/kg (5 mg/lb) twice daily. Dogs with skin and soft tissue infections should be treated for a minimum of 7 days and those with genitourinary infections should be treated for 7 to 21 days or until culture negative and asymptomatic. If no response is observed after three days of treatment, therapy should be discontinued and the case re-evaluated. Maximum duration of therapy should not exceed 30 days.

Store vials at controlled room temperature (15°-30°C, 59°-86°F). At times the solution may become pale yellow in color. This does not indicate a decrease in potency.