Indications and Usage for Retisert

Retisert is indicated for the treatment of chronic non-infectious uveitis affecting the posterior segment of the eye.

Retisert (fluocinolone acetonide intravitreal implant) 0.59 mg is implanted into the posterior segment of the affected eye through a pars plana incision.

Caution should be exercised in handling Retisert in order to avoid damage to the implant, which may result in an increased rate of drug release from the implant. Thus, Retisert should be handled only by the suture tab. Care should be taken during implantation and explantation to avoid sheer forces on the implant that could disengage the silicone cup reservoir (which contains a fluocinolone acetonide tablet) from the suture tab. Aseptic technique should be maintained at all times prior to and during the surgical implantation procedure.

Retisert should not be resterilized by any method.

Surgical placement of Retisert is contraindicated in active viral diseases of the cornea and conjunctiva including epithelial herpes simplex keratitis (dendritic keratitis), vaccinia, and varicella, and also in active bacterial, mycobacterial or fungal infections of the eye.

Use of corticosteroids may result in posterior subcapsular cataract formation.

Based on clinical trials with Retisert, during the 3-year post-implantation period, nearly all phakic eyes are expected to develop cataracts and require cataract surgery.

Following implantation of Retisert, nearly all patients will experience an immediate and temporary decrease in visual acuity in the implanted eye which lasts for approximately one to four weeks post-operatively.

Prolonged use of corticosteroids may result in elevated IOP and/or glaucoma with damage to the optic nerve, defects in visual acuity and fields of vision. Steroids should be used with caution in the presence of glaucoma. Patients must be monitored for elevated IOP.

In vitrostability studies show that the strength of the adhesive bond between the silicone cup reservoir and the suture tab is reduced with prolonged hydration, indicating a potential for the separation of these components. The suture tab composition is a silicone elastomer reinforced with a polyester mesh. Physicians should periodically monitor the integrity of the implant by visual inspection.

Retisert should be used with caution in patients with a history of a viral, bacterial, mycobacterial or fungal infection of the cornea and conjunctiva including epithelial herpes simplex keratitis (dendritic keratitis), vaccinia and varicella. Use of ocular steroids may prolong the course and may exacerbate the severity of many viral infections of the eye (including herpes simplex). Employment of a corticosteroid medication in the treatment of patients with a history of herpes simplex requires great caution.

Prolonged use of corticosteroids may suppress the host response and thus increase the hazard of secondary ocular infections (bacterial, fungal, and viral). In acute purulent conditions of the eye, steroids may mask infection or enhance existing infection. Fungal and viral infections of the cornea are particularly prone to develop coincidentally with long-term application of steroids. The possibility of fungal invasion should be considered in any persistent corneal ulceration where steroid treatment has been used.

Since resistance to infections is known to be reduced by corticosteroids, simultaneous bilateral implantation should not be carried out, in order to limit the potential for bilateral post-operative infection.

Ocular administration of corticosteroids has also been associated with delayed wound healing and perforation of the globe where there is thinning of the sclera.

The use of steroids after cataract surgery may delay healing and increase the incidence of bleb formation.

No adequate animal reproduction studies have been conducted with fluocinolone acetonide. Corticosteroids are generally teratogenic in laboratory animals when administered systemically at relatively low dosage levels. Fluocinolone acetonide when administered subcutaneously at a dose of 0.13 mg/kg/day (approximately 10,000 times the daily clinical dose of Retisert), during days 6 to 18 of pregnancy in the rabbit, induced abortion at the end of the third and at the beginning of the fourth gestational week. When administered subcutaneously to rats and rabbits during gestation at a maternal toxic dose of 50 mcg/kg/day (approximately 4,000 times the clinical dose of Retisert), fluocinolone acetonide caused abortions and malformations in a few surviving fetuses.

There are no adequate and well-controlled studies in pregnant women. Retisert should be used during pregnancy only if the potential benefit justifies the potential risk to the fetus.

It is not known whether ocular administration of corticosteroids could result in sufficient systemic absorption to produce detectable quantities in human milk. Systemic steroids appear in human milk and could suppress growth, interfere with endogenous corticosteroid production, or cause other untoward effects. Caution should be exercised when Retisert is implanted in a nursing woman.

Safety and effectiveness in pediatric patients below the age of 12 years have not been established.

Retisert® (fluocinolone acetonide intravitreal implant) 0.59 mg is a sterile implant designed to release fluocinolone acetonide locally to the posterior segment of the eye at a nominal initial rate of 0.6 mcg/day, decreasing over the first month to a steady state between 0.3-0.4 mcg/day over approximately 30 months. The drug substance is the synthetic corticosteroid fluocinolone acetonide, represented by the following structural formula: 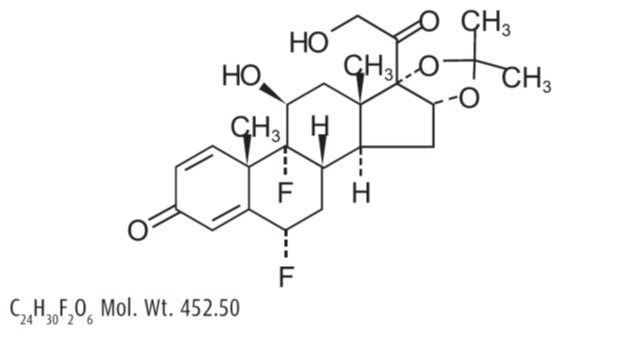 Fluocinolone acetonide is a white crystalline powder, insoluble in water, and soluble in methanol. It has a melting point of 265-266ºC.

Each Retisert consists of a tablet containing 0.59 mg of the active ingredient, Fluocinolone Acetonide, USP, and the following inactives: magnesium stearate, microcrystalline cellulose, and polyvinyl alcohol.

There is no generally accepted explanation for the mechanism of action of ocular corticosteroids. However, corticosteroids are thought to act by the induction of phospholipase A2 inhibitory proteins, collectively called lipocortins. It is postulated that these proteins control the biosynthesis of potent mediators of inflammation such as prostaglandins and leukotrienes by inhibiting the release of their common precursor arachidonic acid. Arachidonic acid is released from membrane phospholipids by phospholipase A2. Corticosteroids are capable of producing a rise in intraocular pressure.

Long-term animal studies have not been performed on Retisert to evaluate the carcinogenic potential or the effect on fertility of fluocinolone acetonide.

Fluocinolone acetonide was not genotoxic in vitroin the Ames test, the mouse lymphoma TK assay, or in vivoin the mouse bone marrow micronucleus assay.

Detailed results are shown in Table 1 below:

Each implant is stored in a clear polycarbonate case within a foil pouch within a Tyvek peelable overwrap. Each packaged implant is provided in a carton which includes the package insert.

Patients should be advised to have ophthalmologic follow-up examinations of both eyes at appropriate intervals following implantation of Retisert.

As with any surgical procedure, there is risk involved. Potential complications accompanying intraocular surgery to place Retisert into the vitreous cavity may include, but are not limited to, the following: cataract formation, choroidal detachment, temporary decreased visual acuity, endophthalmitis, hypotony, increased intraocular pressure, exacerbation of intraocular inflammation, retinal detachment, vitreous hemorrhage, vitreous loss, and wound dehiscence.

Following implantation of Retisert, nearly all patients will experience an immediate and temporary decrease in visual acuity in the implanted eye which lasts for approximately one to four weeks post-operatively.

Based on clinical trials with Retisert, during the 3-year post-implantation period, nearly all phakic eyes are expected to develop cataracts and require cataract surgery.

FOR INTRAVITREAL IMPLANTATION ONLY