Indications and Usage for Istalol

One drop of Istalol 0.5% should be administered in the affected eye(s) once a day in the AM.

Istalol is contraindicated in patients who have exhibited a hypersensitivity reaction to any component of this product in the past.

Potentiation of Respiratory Reactions Including Asthma

Istalol contains timolol maleate; and although administered topically, it can be absorbed systemically. Therefore, the same adverse reactions found with systemic administration of beta-adrenergic blocking agents may occur with topical administration. For example, severe respiratory reactions and cardiac reactions including death due to bronchospasm in patients with asthma, and rarely death in association with cardiac failure, have been reported following systemic or ophthalmic administration of timolol maleate [see Contraindications (4.1)].

Sympathetic stimulation may be essential for support of the circulation in individuals with diminished myocardial contractility, and its inhibition of beta-adrenergic receptor blockade may precipitate more severe failure.

Patients with chronic obstructive pulmonary disease (e.g., chronic bronchitis, emphysema) of mild or moderate severity, bronchospastic disease, or a history of bronchospastic disease [other than bronchial asthma or a history of bronchial asthma in which Istalol is contraindicated] should, in general, not receive beta-blocking agents, including Istalol [see Contraindications (4.1)].

Masking of Hypoglycemic Symptoms in Patients with Diabetes Mellitus

Contamination of Topical Ophthalmic Products After Use

There have been reports of bacterial keratitis associated with the use of multidose containers of topical ophthalmic products. These containers had been inadvertently contaminated by patients who, in most cases, had a concurrent corneal disease or a disruption of the ocular epithelial surface [see Patient Counseling Information (17)].

Because of potential effects of beta-adrenergic blocking agents on blood pressure and pulse, these agents should be used with caution in patients with cerebrovascular insufficiency. If signs or symptoms suggesting reduced cerebral blood flow develop following initiation of therapy with Istalol, alternative therapy should be considered.

Choroidal detachment after filtration procedures has been reported with the administration of aqueous suppressant therapy (e.g., timolol).

The most frequently reported adverse reactions have been burning and stinging upon instillation in 38% of patients treated with Istalol. Additional reactions reported with Istalol at a frequency of 4 to 10% include: blurred vision, cataract, conjunctival injection, headache, hypertension, infection, itching and decreased visual acuity.

The following additional adverse reactions have been reported less frequently with ocular administration of this or other timolol maleate formulations.

Close observation of the patient is recommended when a beta-blocker is administered to patients receiving catecholamine-depleting drugs such as reserpine, because of possible additive effects and the production of hypotension and/or marked bradycardia, which may result in vertigo, syncope, or postural hypotension.

The concomitant use of beta-adrenergic blocking agents with digitalis and calcium antagonists may have additive effects in prolonging atrioventricular conduction time.

Teratogenicity studies have been performed in animals.

There are no adequate and well-controlled studies in pregnant women. Istalol should be used during pregnancy only if the potential benefit justifies the potential risk to the fetus.

Timolol has been detected in human milk following oral and ophthalmic drug administration. Because of the potential for serious adverse reactions from Istalol in nursing infants, a decision should be made whether to discontinue nursing or to discontinue the drug, taking into account the importance of the drug to the mother.

There have been reports of inadvertent overdosage with Istalol resulting in systemic effects similar to those seen with systemic beta-adrenergic blocking agents such as dizziness, headache, shortness of breath, bradycardia, bronchospasm, and cardiac arrest.

Istalol (timolol maleate ophthalmic solution) 0.5% is a non-selective beta-adrenergic receptor blocking agent. Its chemical name is (-)-1-(tert-butylamino)-3-[(4-morpholino-1,2,5-thiadiazol-3-yl)oxy]-2-propanol maleate (1:1) (salt). Timolol maleate possesses an asymmetric carbon atom in its structure and is provided as the levo-isomer.

Its molecular formula is C13H24N4O3S-C4H4O4 and its structural formula is:

Timolol maleate has a molecular weight of 432.49. It is a white, odorless, crystalline powder which is soluble in water, methanol, and alcohol. Istalol is stable at room temperature. Istalol ophthalmic solution is supplied as a sterile, isotonic, buffered, aqueous solution of timolol maleate in a single strength. It has a pH of 6.5 to 7.5 and an osmolality of 275 to 330 mOsm/kg.

Beta-adrenergic receptor blockade in the bronchi and bronchioles results in increased airway resistance from unopposed parasympathetic activity. Such an effect in patients with asthma or other bronchospastic conditions is potentially dangerous.

The precise mechanism of the ocular hypotensive action of Istalol is not clearly established at this time. Tonography and fluorophotometry studies in man suggest that its predominant action may be related to reduced aqueous formation. However, in some studies a slight increase in outflow facility was also observed.

In a study of plasma drug concentration in 12 healthy subjects, the systemic exposure to timolol was determined following twice daily administration of Istalol (exaggerated regimen) for eight days. With Istalol, mean plasma concentrations of timolol were 0.68 ng/mL and 0.88 ng/mL two hours after the first dose and the dose on the eighth day, respectively.

In a two-year study of timolol maleate administered orally to rats, there was a statistically significant increase in the incidence of adrenal pheochromocytomas in male rats administered 300 mg/kg/day (approximately 42,000 times the systemic exposure following the maximum recommended human ophthalmic dose). Similar differences were not observed in rats administered oral doses equivalent to approximately 14,000 times the maximum recommended human ophthalmic dose.

The increased occurrence of mammary adenocarcinomas was associated with elevations in serum prolactin which occurred in female mice administered oral timolol at 500 mg/kg/day, but not at doses of 5 or 50 mg/kg/day. An increased incidence of mammary adenocarcinomas in rodents has been associated with administration of several other therapeutic agents that elevate serum prolactin, but no correlation between serum prolactin levels and mammary tumors has been established in humans. Furthermore, in adult human female subjects who received oral dosages of up to 60 mg of timolol maleate (the maximum recommended human oral dosage), there were no clinically meaningful changes in serum prolactin.

Timolol maleate was devoid of mutagenic potential when tested in vivo(mouse) in the micronucleus test and cytogenetic assay (doses up to 800 mg/kg) and in vitroin a neoplastic cell transformation assay (up to 100 mcg/mL). In Ames tests, the highest concentrations of timolol employed, 5,000 or 10,000 mcg/plate, were associated with statistically significant elevations of revertants observed with tester strain TA100 (in seven replicate assays), but not in the remaining three strains. In the assays with tester strain TA100, no consistent dose response relationship was observed, and the ratio of test to control revertants did not reach 2. A ratio of 2 is usually considered the criterion for a positive Ames test.

Reproduction and fertility studies in rats demonstrated no adverse effect on male or female fertility at doses up to 21,000 times the systemic exposure following the maximum recommended human ophthalmic dose.

In a controlled, double-masked, parallel study in 332 patients with untreated intraocular pressures of 22 mm Hg or greater, Istalol 0.5% administered once daily (AM) was equivalent to timolol maleate ophthalmic solution 0.5% administered twice daily. In both groups, mean intraocular pressure decreased from 25 mm Hg at baseline to 18 mm Hg at peak and 19 mm Hg at trough. Istalol was generally well tolerated, and 3% of patients had treatment discontinued for adverse events judged related to treatment. There was a slight decrease in cardiovascular function consistent with known systemic absorption of β-adrenoceptor antagonists.

Patients should also be instructed that ocular solutions, if handled improperly or if the tip of the dispensing container contacts the eye or surrounding structures, can become contaminated by common bacteria known to cause ocular infections. Serious damage to the eye and subsequent loss of vision may result from using contaminated solutions [see Warnings and Precautions (5.8)].

Patients should also be advised that if they have ocular surgery or develop an intercurrent ocular condition (e.g., trauma or infection), they should immediately seek their physician’s advice concerning the continued use of the present multidose container.

If more than one topical ophthalmic drug is being used, the drugs should be administered at least five minutes apart.

Istalol is a trademark of Bausch & Lomb Incorporated or its affiliates.

© 2022 Bausch & Lomb Incorporated or its affiliates 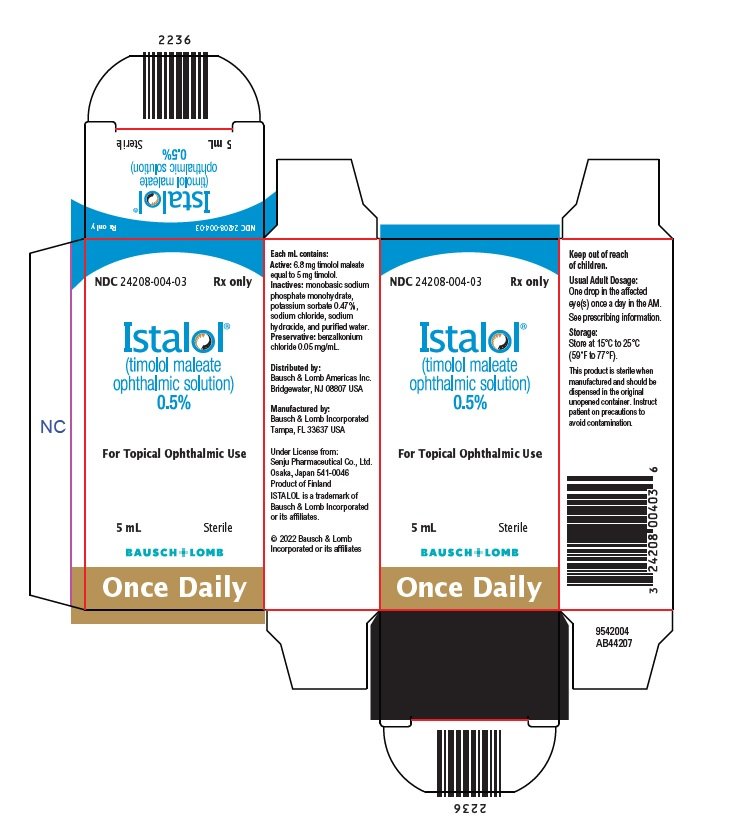 For Topical Ophthalmic Use