Cyproheptadine HCl USP, is an antihistaminic and antiserotonergic agent. 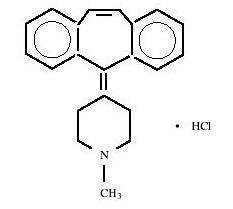 After a single 4 mg oral dose of 14C-labelled Cyproheptadine HCl in normal subjects, given as tablets, 2 to 20% of the radioactivity was excreted in the stools. Only about 34% of the stool radioactivity was unchanged drug, corresponding to less than 5.7% of the dose. At least 40% of the administered radioactivity was excreted in the urine. No detectable amounts of unchanged drug were present in the urine of patients on chronic 12 to 20 mg daily doses. The principle metabolite found in human urine has been identified as a quaternary ammonium glucuronide conjugate of Cyproheptadine. Elimination is diminished in renal insufficiency.

Indications and Usage for Cyproheptadine

Allergic conjunctivitis due to inhalant allergens and foods

Amelioration of allergic reactions to blood or plasma

As therapy for anaphylactic reactions adjunctive to epinephrine and other standard measures after the acute manifestations have been controlled.

This drug should not be used in newborn or premature infants.

Because of the higher risk of antihistamines for infants generally and for newborns and prematures in particular, antihistamine therapy is contraindicated in nursing mothers.

Hypersensitivity to Cyproheptadine and other drugs of similar chemical structure.

Antihistamines may diminish mental alertness; conversely, particularly, in the young child, they may occasionally produce excitation.

Patients should be warned about engaging in activities requiring mental alertness and motor coordination, such as driving a car or operating machinery.

Antihistamines are more likely to cause dizziness, sedation, and hypotension in elderly patients (see PRECAUTIONS, Geriatric Use).

Cyproheptadine has an atropine-like action and, therefore, should be used with caution in patients with:

Antihistamines may diminish mental alertness; conversely, particularly, in the young child, they may occasionally produce excitation. Patients should be warned about engaging in activities requiring mental alertness and motor coordination, such as driving a car or operating machinery.

MAO inhibitors prolong and intensify the anticholinergic effects of antihistamines.

Long-term carcinogenic studies have not been done with Cyproheptadine.

Cyproheptadine had no effect on fertility in a two-litter study in rats or a two generation study in mice at about 10 times the human dose.

Reproduction studies have been performed in rabbits, mice, and rats at oral or subcutaneous doses up to 32 times the maximum recommended human oral dose and have revealed no evidence of impaired fertility or harm to the fetus due to Cyproheptadine. Cyproheptadine has been shown to be fetotoxic in rats when given by intraperitoneal injection in doses four times the maximum recommended human oral dose. Two studies in pregnant women, however, have not shown that Cyproheptadine increases the risk of abnormalities when administered during the first, second and third trimesters of pregnancy. No teratogenic effects were observed in any of the newborns. Nevertheless, because the studies in humans cannot rule out the possibility of harm, Cyproheptadine should be used during pregnancy only if clearly needed.

It is not known whether this drug is excreted in human milk. Because many drugs are excreted in human milk, and because of the potential for serious adverse reactions in nursing infants from Cyproheptadine, a decision should be made whether to discontinue nursing or to discontinue the drug, taking into account the importance of the drug to the mother (seeCONTRAINDICATIONS).

Safety and effectiveness in pediatric patients below the age of two have not been established (see CONTRAINDICATIONS, Newborn or Premature Infants, and WARNINGS,Pediatric Patients).

Clinical studies of Cyproheptadine HCl tablets did not include sufficient numbers of subjects aged 65 and over to determine whether they respond differently from younger subjects. Other reported clinical experience has not identified differences in responses between the elderly and younger patients. In general, dose selection for an elderly patient should be cautious, usually starting at the low end of the dosing range, reflecting the greater frequency of decreased hepatic, renal, or cardiac function, and of concomitant disease or other drug therapy (seeWARNINGS, Activities Requiring Mental Alertness).

Adverse reactions which have been reported with the use of antihistamines are as follows:

Dryness of nose and throat, thickening of bronchial secretions, tightness of chest and wheezing, nasal stuffiness.

If vomiting has not occurred spontaneously, the patient should be induced to vomit with syrup of ipecac.

If patient is unable to vomit, perform gastric lavage followed by activated charcoal. Isotonic or ½ isotonic saline is the lavage of choice. Precautions against aspiration must be taken especially in infants and children.

When life threatening CNS signs and symptoms are present, intravenous physostigmine salicylate may be considered. Dosage and frequency of administration are dependent on age, clinical response, and recurrence after response. (See package circulars for physostigmine products.)

Saline cathartics, as milk of magnesia, by osmosis draw water into the bowel and, therefore, are valuable for their action in rapid dilution of bowel content.

Stimulants should not be used.

Vasopressors may be used to treat hypotension.

The oral LD50 of Cyproheptadine is 123 mg/kg, and 295 mg/kg in the mouse and rat, respectively

DOSAGE SHOULD BE INDIVIDUALIZED ACCORDING TO THE NEEDS AND THE RESPONSE OF THE PATIENT.

The total daily dosage for pediatric patients may be calculated on the basis of body weight or body area using approximately 0.25 mg/kg/day or 8 mg per square meter of body surface (8 mg/m2).

The usual dose is 2 mg (½ tablet) two or three times a day, adjusted as necessary to the size and response of the patient. The dose is not to exceed 12 mg a day.

The usual dose is 4 mg (1 tablet) two or three times a day adjusted as necessary to the size and response of the patient. The dose is not to exceed 16 mg a day.

The total daily dose for adults should not exceed 0.5 mg/kg/day. The therapeutic range is 4 to 20 mg a day, with the majority of patients requiring 12 to 16 mg a day. An occasional patient may require as much as 32 mg a day for adequate relief. It is suggested that dosage be initiated with 4 mg (1 tablet) three times a day and adjusted according to the size and response of the patient.

How is Cyproheptadine Supplied

PHARMACIST: Dispense in a well-closed container as defined in the USP, with a child-resistant closure (as required).