The Campral brand name has been discontinued in the U.S. If generic versions of this product have been approved by the FDA, there may be generic equivalents available.

Indications and Usage for Campral

Campral® is indicated for the maintenance of abstinence from alcohol in patients with alcohol dependence who are abstinent at treatment initiation. Treatment with Campral should be part of a comprehensive management program that includes psychosocial support.

The recommended dose of Campral is two 333 mg tablets (each dose should total 666 mg) taken three times daily. A lower dose may be effective in some patients.

Although dosing may be done without regard to meals, dosing with meals was employed during clinical trials and is suggested in those patients who regularly eat three meals daily.

For patients with moderate renal impairment (creatinine clearance of 30-50 mL/min), a starting dose of one 333 mg tablet taken three times daily is recommended. Campral is contraindicated in patients with severe renal impairment (creatinine clearance of ≤30 mL/min) [see Contraindications (4.2), Warnings and Precautions (5.1), Use in Specific Populations (8.6), and Clinical Pharmacology (12.3)].

Campral 333 mg tablets are enteric-coated, white, round, biconvex tablets, identified with “333” debossed on one side.

Campral is contraindicated in patients who previously have exhibited hypersensitivity to acamprosate calcium or any of its components.

Campral is contraindicated in patients with severe renal impairment (creatinine clearance of ≤30 mL/min) [see Dosage and Administration (2.1), Warnings and Precautions (5.1), Use in Specific Populations (8.6), and Clinical Pharmacology (12.3)].

Treatment with Campral in patients with moderate renal impairment (creatinine clearance of 30-50 mL/min) requires a dose reduction [see Dosage and Administration (2.1)]. Campral is contraindicated in patients with severe renal impairment (creatinine clearance of ≤30 mL/min) [see Dosage and Administration (2.1), Contraindications (4.2), Use in Specific Populations (8.6), and Clinical Pharmacology (12.3)].

In controlled clinical trials of Campral, adverse events of a suicidal nature (suicidal ideation, suicide attempts, completed suicides) were infrequent overall, but were more common in Campral-treated patients than in patients treated with placebo (1.4% vs. 0.5% in studies of 6 months or less; 2.4% vs. 0.8% in year-long studies). Completed suicides occurred in 3 of 2272 (0.13%) patients in the pooled acamprosate group from all controlled studies and 2 of 1962 patients (0.10%) in the placebo group. Adverse events coded as "depression" were reported at similar rates in Campral-treated and placebo-treated patients. Although many of these events occurred in the context of alcohol relapse, and the interrelationship between alcohol dependence, depression and suicidality is well-recognized and complex, no consistent pattern of relationship between the clinical course of recovery from alcoholism and the emergence of suicidality was identified. Alcohol-dependent patients, including those patients being treated with Campral, should be monitored for the development of symptoms of depression or suicidal thinking. Families and caregivers of patients being treated with Campral should be alerted to the need to monitor patients for the emergence of symptoms of depression or suicidality, and to report such symptoms to the patient's health care provider.

Use of Campral does not eliminate or diminish withdrawal symptoms.

The adverse event data described below reflect the safety experience in over 7000 patients exposed to Campral for up to one year, including over 2000 Campral-exposed patients who participated in placebo-controlled trials.

In clinical trials, the safety profile in subjects treated with Campral concomitantly with anxiolytics, hypnotics and sedatives (including benzodiazepines), or non-opioid analgesics was similar to that of subjects taking placebo with these concomitant medications. Patients taking Campral concomitantly with antidepressants more commonly reported both weight gain and weight loss, compared with patients taking either medication alone.

Other Events Observed During the Premarketing Evaluation of Campral

Following is a list of terms that reflect treatment-emergent adverse events reported by patients treated with Campral in 20 clinical trials (4461 patients treated with Campral, 3526 of whom received the maximum recommended dose of 1998 mg/day for up to one year in duration). This listing does not include those events already listed above; events for which a drug cause was considered remote; event terms which were so general as to be uninformative; and events reported only once which were not likely to be acutely life-threatening.

The following adverse reactions have been identified during post approval use of Campral. Because these reactions are reported voluntarily from a population of uncertain size, it is not always possible to reliably estimate their frequency or establish a causal relationship to drug exposure.

The serious adverse event of acute kidney failure has been reported to be temporally associated with Campral treatment in at least 3 patients and is not described elsewhere in the labeling.

Nonteratogenic effects: A study conducted in pregnant mice that were administered acamprosate calcium by the oral route starting on Day 15 of gestation through the end of lactation on postnatal day 28 demonstrated an increased incidence of still-born fetuses at doses of 960 mg/kg/day or greater (approximately 2 times the MRHD oral dose on a mg/m2 basis). No effects were observed at a dose of 320 mg/kg/day (approximately one-half the MRHD dose on a mg/m2 basis).

The potential for Campral to affect the duration of labor and delivery is unknown.

The safety and efficacy of Campral have not been established in the pediatric population.

Forty-one of the 4234 patients in double-blind, placebo-controlled, clinical trials of Campral were 65 years of age or older, while none were 75 years of age or over. There were too few patients in the ≥65 age group to evaluate any differences in safety or effectiveness for geriatric patients compared to younger patients.

This drug is known to be substantially excreted by the kidney, and the risk of toxic reactions to this drug may be greater in patients with impaired renal function. Because elderly patients are more likely to have decreased renal function, care should be taken in dose selection, and it may be useful to monitor renal function [see Clinical Pharmacology (12.3), Adverse Reactions (6.1), and Dosage and Administration (2.1)].

In all reported cases of acute overdosage with Campral (total reported doses of up to 56 grams of acamprosate calcium), the only symptom that could be reasonably associated with Campral was diarrhea. Hypercalcemia has not been reported in cases of acute overdose. A risk of hypercalcemia should be considered in chronic overdosage only. Treatment of overdose should be symptomatic and supportive.

Campral (acamprosate calcium) is supplied in an enteric-coated tablet for oral administration. Acamprosate calcium is a synthetic compound with a chemical structure similar to that of the endogenous amino acid homotaurine, which is a structural analogue of the amino acid neurotransmitter γ-aminobutyric acid and the amino acid neuromodulator taurine. Its chemical name is calcium acetylaminopropane sulfonate. Its chemical formula is C10H20N2O8S2Ca and molecular weight is 400.48. Its structural formula is:

Acamprosate calcium is a white, odorless or nearly odorless powder. It is freely soluble in water, and practically insoluble in absolute ethanol and dichloromethane.

The mechanism of action of acamprosate in maintenance of alcohol abstinence is not completely understood. Chronic alcohol exposure is hypothesized to alter the normal balance between neuronal excitation and inhibition. In vitro and in vivo studies in animals have provided evidence to suggest acamprosate may interact with glutamate and GABA neurotransmitter systems centrally, and has led to the hypothesis that acamprosate restores this balance.

Pharmacodynamic studies have shown that acamprosate calcium reduces alcohol intake in alcohol-dependent animals in a dose-dependent manner and that this effect appears to be specific to alcohol and the mechanisms of alcohol dependence.

Acamprosate calcium has negligible observable central nervous system (CNS) activity in animals outside of its effects on alcohol dependence, exhibiting no anticonvulsant, antidepressant, or anxiolytic activity.

The administration of acamprosate calcium is not associated with the development of tolerance or dependence in animal studies. Campral did not produce any evidence of withdrawal symptoms in patients in clinical trials at therapeutic doses. Post marketing data, collected retrospectively outside the U.S. have provided no evidence of Campral abuse or dependence.

Campral is not known to cause alcohol aversion and does not cause a disulfiram-like reaction as a result of ethanol ingestion.

The absolute bioavailability of Campral after oral administration is about 11%. Steady-state plasma concentrations of acamprosate are reached within 5 days of dosing. Steady-state peak plasma concentrations after Campral doses of 2 x 333 mg tablets three times daily average 350 ng/mL and occur at 3-8 hours post-dose. Coadministration of Campral with food decreases bioavailability as measured by Cmax and AUC, by approximately 42% and 23%, respectively. The food effect on absorption is not clinically significant and no adjustment of dose is necessary.

The volume of distribution for acamprosate following intravenous administration is estimated to be 72-109 liters (approximately 1 L/kg). Plasma protein binding of acamprosate is negligible.

Acamprosate does not undergo metabolism.

After oral dosing of 2 x 333 mg of Campral, the terminal half-life ranges from approximately 20-33 hours. Following oral administration of Campral, the major route of excretion is via the kidneys as acamprosate.

Gender: Campral does not exhibit any significant pharmacokinetic differences between male and female subjects.

Age: The pharmacokinetics of Campral have not been evaluated in a geriatric population. However, since renal function diminishes in elderly patients and acamprosate is excreted unchanged in urine, acamprosate plasma concentrations are likely to be higher in the elderly population compared to younger adults.

Pediatrics: The pharmacokinetics of Campral have not been evaluated in a pediatric population.

Renal Impairment: Peak plasma concentrations after administration of a single dose of 2 x 333 mg Campral tablets to patients with moderate or severe renal impairment were about 2-fold and 4-fold higher, respectively, compared to healthy subjects. Similarly, elimination half-life was about 1.8-fold and 2.6-fold longer, respectively, compared to healthy subjects. There is a linear relationship between creatinine clearance values and total apparent plasma clearance, renal clearance and plasma half-life of acamprosate. A dose of 1 x 333 mg Campral, three times daily, is recommended in patients with moderate renal impairment (creatinine clearance of 30-50 mL/min, [see Use in Specific Populations (8.6)].

Campral is contraindicated in patients with severe renal impairment (creatinine clearance of ≤30 mL/min) [see Dosage and Administration (2.1), Contraindications (4.2), Warnings and Precautions (5.1), and Use in Specific Populations (8.6)].

Hepatic Impairment: Acamprosate is not metabolized by the liver and the pharmacokinetics of Campral are not altered in patients with mild to moderate hepatic impairment (groups A and B of the Child-Pugh classification). No adjustment of dosage is recommended in such patients.

Acamprosate had no inducing potential on the cytochrome CYP1A2 and 3A4 systems, and in vitro inhibition studies suggest that acamprosate does not inhibit in vivo metabolism mediated by cytochrome CYP1A2, 2C9, 2C19, 2D6, 2E1, or 3A4. The pharmacokinetics of Campral were unaffected when co-administered with alcohol, disulfiram or diazepam. Similarly, the pharmacokinetics of ethanol, diazepam and nordiazepam, imipramine and desipramine, naltrexone and 6-beta naltrexol were unaffected following co-administration with Campral. However, co-administration of Campral with naltrexone led to a 33% increase in the Cmax and a 25% increase in the AUC of acamprosate. No adjustment of dosage is recommended in such patients.

The efficacy of Campral in the maintenance of abstinence was supported by three clinical studies involving a total of 998 patients who were administered at least one dose of Campral or placebo as an adjunct to psychosocial therapy. Each study was a double-blind, placebo-controlled trial in alcohol-dependent patients who had undergone inpatient detoxification and were abstinent from alcohol on the day of randomization. Study durations ranged from 90 days to 360 days. Campral proved superior to placebo in maintaining abstinence, as indicated by a greater percentage of subjects being assessed as continuously abstinent throughout treatment.

In a fourth study, the efficacy of Campral was evaluated in alcoholics, including patients with a history of polysubstance abuse and patients who had not undergone detoxification and were not required to be abstinent at baseline. This study failed to demonstrate superiority of Campral over placebo.

Physicians are advised to discuss the following issues with patients for whom they prescribe Campral.

Families and caregivers of patients being treated with Campral should be alerted to the need to monitor patients for the emergence of symptoms of depression or suicidality, and to report such symptoms to the patient's health care provider [see Warnings and Precautions (5.2)].

Use of Campral does not eliminate or diminish withdrawal symptoms [see Warnings and Precautions (5.3)]. 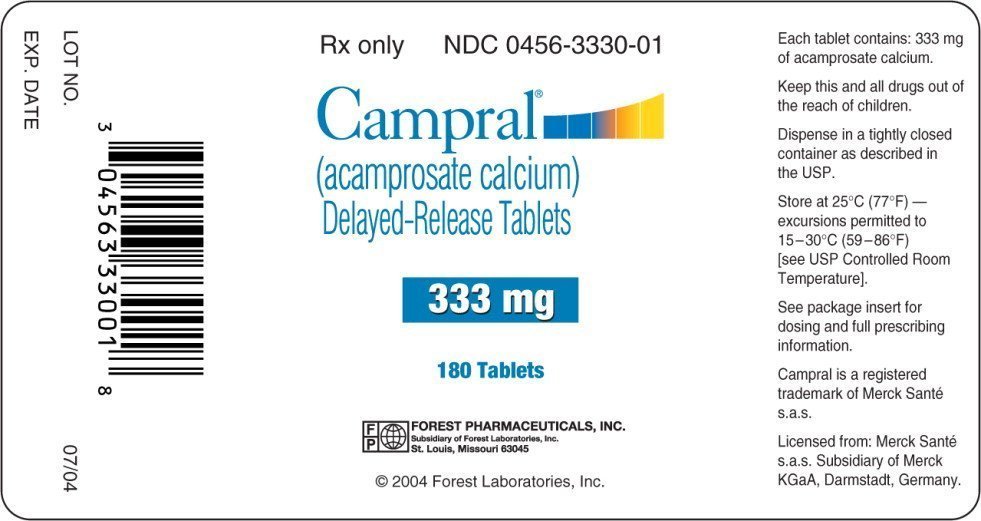 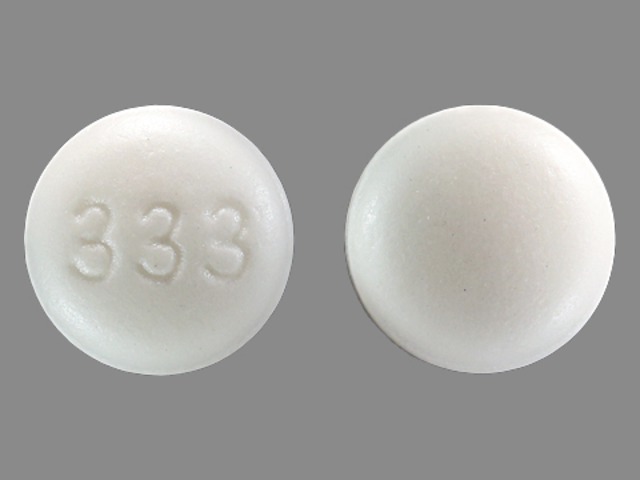