Indications and Usage for Auryxia

Auryxia is indicated for the control of serum phosphorus levels in adult patients with chronic kidney disease on dialysis.

Auryxia is indicated for the treatment of iron deficiency anemia in adult patients with chronic kidney disease not on dialysis.

Dosage for Hyperphosphatemia in Chronic Kidney Disease on Dialysis

The recommended starting dose is 2 tablets, swallowed whole, 3 times per day with meals. Auryxia tablets must not be chewed or crushed because it may cause discoloration of mouth and teeth. Monitor serum phosphorus levels and titrate the Auryxia dose in decrements or increments of 1 to 2 tablets per day as needed to maintain serum phosphorus at target levels, up to a maximum dose of 12 tablets daily. Dose can be titrated at 1-week or longer intervals.

In a clinical trial, patients required an average of 8 to 9 tablets a day to control serum phosphorus levels.

The recommended starting dose is 1 tablet, swallowed whole, 3 times per day with meals. Auryxia tablets must not be chewed or crushed because it may cause discoloration of mouth and teeth. Titrate the dose of Auryxia as needed to achieve and maintain hemoglobin at target levels, up to a maximum dose of 12 tablets daily.

In a clinical trial in patients with chronic kidney disease not on dialysis (CKD-NDD), patients required an average of 5 tablets per day to increase hemoglobin levels.

Iron absorption from Auryxia may lead to excessive elevations in iron stores. Increases in serum ferritin and transferrin saturation (TSAT) levels were observed in clinical trials. In a 56-week safety and efficacy trial evaluating the control of serum phosphate levels in patients with chronic kidney disease on dialysis in which concomitant use of intravenous iron was permitted, 55 (19%) of patients treated with Auryxia had a ferritin level >1500 ng/mL as compared with 13 (9%) of patients treated with active control.

Risk of Overdosage in Children Due to Accidental Ingestion

Accidental ingestion and resulting overdose of iron-containing products is a leading cause of fatal poisoning in children under 6 years of age [see Overdosage (10)]. Advise patients of the risks to children and to keep Auryxia out of the reach of children.

During the 52-week, active-control period, 61 patients (21%) on Auryxia discontinued study drug because of an adverse reaction, as compared to 21 patients (14%) in the active control arm. Patients who were previously intolerant to any of the active control treatments (calcium acetate and sevelamer carbonate) were not eligible to enroll in the study. Gastrointestinal adverse reactions were the most common reason for discontinuing Auryxia (14%).

Adverse reactions reported in at least 5% of patients treated with Auryxia in these trials are listed in Table 1.

During the 16-week, placebo-control trial, 12 patients (10%) on Auryxia discontinued study drug because of an adverse reaction, as compared to 10 patients (9%) in the placebo control arm. Diarrhea was the most common adverse reaction leading to discontinuation of Auryxia (2.6%).

Oral medications not listed in Table 2

There are no empirical data on avoiding drug interactions between Auryxia and most concomitant oral drugs. For oral medications where a reduction in the bioavailability of that medication would have a clinically significant effect on its safety or efficacy, consider separation of the timing of the administration of the two drugs. The duration of separation depends upon the absorption characteristics of the medication concomitantly administered, such as the time to reach peak systemic levels and whether the drug is an immediate release or an extended release product. Consider monitoring clinical responses or blood levels of concomitant medications that have a narrow therapeutic range.

There are no available data on Auryxia use in pregnant women to inform a drug-associated risk of major birth defects and miscarriage. Animal reproduction studies have not been conducted using Auryxia. Skeletal and encephalic malformation was observed in neonatal mice when ferric gluconate was administered intraperitoneally to gravid dams on gestation days 7-9. However, oral administration of other ferric or ferrous compounds to gravid CD1-mice and Wistar-rats caused no fetal malformation.

An overdose of iron in pregnant women may carry a risk for spontaneous abortion, gestational diabetes and fetal malformation.

The estimated background risk of major birth defects and miscarriage for the indicated population is unknown. Adverse outcomes in pregnancy occur regardless of the health of the mother or the use of medications. In the U.S. general population, the estimated background risks of major birth defects and miscarriage in clinically recognized pregnancies are 2 to 4% and 15 to 20%, respectively.

There are no human data regarding the effect of Auryxia in human milk, the effects on the breastfed child, or the effects on milk production. Data from rat studies have shown the transfer of iron into milk by divalent metal transporter-1 (DMT-1) and ferroportin-1 (FPN-1). Hence, there is a possibility of infant exposure when Auryxia is administered to a nursing woman. The development and health benefits of breastfeeding should be considered along with the mother’s clinical need for Auryxia and any potential adverse effects on the breastfed child from Auryxia or from the underlying maternal condition.

The safety and efficacy of Auryxia have not been established in pediatric patients.

No data are available regarding overdose of Auryxia in patients. In patients with chronic kidney disease, the maximum dose studied was 2,520 mg ferric iron (12 tablets of Auryxia) per day. Iron absorption from Auryxia may lead to excessive elevations in iron stores, especially when concomitant intravenous iron is used [see Warnings and Precautions (5.1)].

In clinical trials, one case of elevated iron in the liver as confirmed by biopsy was reported in a patient on dialysis administered intravenous iron and Auryxia.

Ferric iron is reduced from the ferric to the ferrous form by ferric reductase in the GI tract. After transport through the enterocytes into the blood, oxidized ferric iron circulates bound to the plasma protein transferrin, and can be incorporated into hemoglobin.

Auryxia reduces serum phosphorus levels and has also been shown to increase serum iron parameters, including ferritin, iron and TSAT. In dialysis patients treated with Auryxia for hyperphosphatemia in a 52-week study in which intravenous iron could also be administered, mean (SD) ferritin levels rose from 593 (293) ng/mL to 895 (482) ng/mL, mean (SD) TSAT levels rose from 31% (11) to 39% (17) and mean (SD) iron levels rose from 73 (29) mcg/dL to 88 (42) mcg/dL. In contrast, in patients treated with active control, these parameters remained relatively constant [see Contraindications (4) and Warnings and Precautions (5.1)].

Formal pharmacokinetic studies have not been performed with Auryxia. Examination of serum iron parameters has shown that there is systemic absorption of iron from Auryxia [see Contraindications (4), Warnings and Precautions (5.1) and Clinical Pharmacology (12.2)].

Six drug interaction studies (N=26-60/study) were conducted to establish the effects of Auryxia (administered as 3 x 2 g/day with meals) on the disposition of concomitantly orally administered clopidogrel, ciprofloxacin, digoxin, diltiazem, glimepiride and losartan in healthy subjects. With the exception of ciprofloxacin, Auryxia did not alter the systemic exposure of the tested drugs, as measured by the area under the curve (AUC) and Cmax of the tested drugs when either co-administered with Auryxia or given 2 hours later. Auryxia decreased the relative bioavailability of concomitantly administered ciprofloxacin by approximately 45%. However, there was no interaction when Auryxia and ciprofloxacin were taken 2 hours apart. Consequently, ciprofloxacin should be taken at least 2 hours before or after Auryxia is dosed [see Drug Interactions (7)].

Data from carcinogenesis studies have shown that ferric citrate is not carcinogenic in mice and rats when administered intramuscularly or subcutaneously. Ferric citrate was neither mutagenic in the bacterial reverse mutation assay (Ames test) nor clastogenic in the chromosomal aberration test in Chinese hamster fibroblasts.

The potential for ferric citrate to impair reproductive performance or to cause fetal malformation has not been evaluated.

The ability of Auryxia to lower serum phosphorus in patients with CKD on dialysis was demonstrated in randomized clinical trials: one 56-week, safety and efficacy trial, consisting of a 52-week active-controlled phase and a 4-week, placebo-controlled, randomized withdrawal period, and one 4-week open-label trial of different fixed doses of Auryxia. Both trials excluded subjects who had an absolute requirement for aluminum containing drugs with meals.

Study KRX-0502-304 was a long-term, randomized, controlled, safety and efficacy trial. After the 2-week washout period during which phosphate binders were held, patients with a mean serum phosphorus of 7.5 mg/dL during washout were randomized 2:1 to Auryxia (N=292) or active control (calcium acetate and/or sevelamer carbonate; N=149). The majority (>96%) of subjects were on hemodialysis. The starting dose of Auryxia was 6 tablets/day, divided with meals. The starting dose of active control was the patient’s dose prior to the washout period. The dose of phosphate binder was increased or decreased as needed to maintain serum phosphorus levels between 3.5 and 5.5 mg/dL, to a maximum of 12 tablets/day.

As shown in the figure below, serum phosphorus levels declined following initiation of therapy. The phosphorus lowering effect was maintained over 52 weeks of treatment. 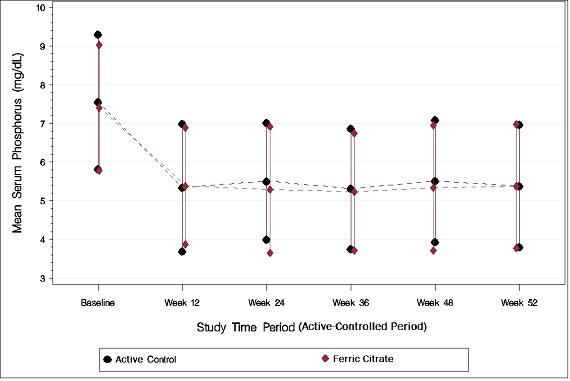 The efficacy of Auryxia for the treatment of iron deficiency anemia in adult patients with CKD not on dialysis was demonstrated in a 24-week study consisting of a 16-week, randomized, double-blind, placebo-controlled, efficacy period followed by an 8-week open-label safety extension period in which all patients remaining in the study, including the placebo group, received Auryxia. Patients with eGFR <60 mL/min/1.73m2, who were intolerant of or have had an inadequate therapeutic response to oral iron supplements, with Hgb ≥9.0 g/dL and ≤11.5 g/dL, serum ferritin ≤200 ng/mL and TSAT ≤25% were enrolled. Patients were randomized to treatment with either Auryxia (n=117) or placebo (n= 117). Dosing with Auryxia or placebo was initiated at 3 tablets/day with meals. Dose titration could occur at Weeks 4, 8 and 12 during Randomized Period, and at Weeks 18 and 20 during Safety Extension Period based on Hgb response. Use of oral or intravenous iron, erythropoiesis stimulating agents (ESAs) was not permitted at any time during the study.

The main efficacy outcome measure was the proportion of subjects achieving an increase in Hgb of ≥1.0 g/dL at any time point between baseline and the end of the 16-week Randomized Period.

During the 16-week randomized period 49% of subjects in the Auryxia arm and 15% of subjects in the placebo arm (p <0.001) had a mean change in hemoglobin from baseline ≥0.75 g/dL over any 4-week time period provided that an increase of at least 1.0 g/dL had occurred during that 4-week period. Increases in mean hemoglobin (0.75 ± 0.09 g/dL), serum ferritin (163 ± 9 ng/mL) and transferrin saturation (18 ± 1%) were observed from baseline during the 16-week randomized period in the Auryxia arm.

Advise patients that Auryxia may cause discolored (dark) stools, but this staining of the stool is considered normal with oral medications containing iron.

Advise patients to keep this product out of the reach of children and to seek immediate medical attention in case of accidental ingestion by a child. 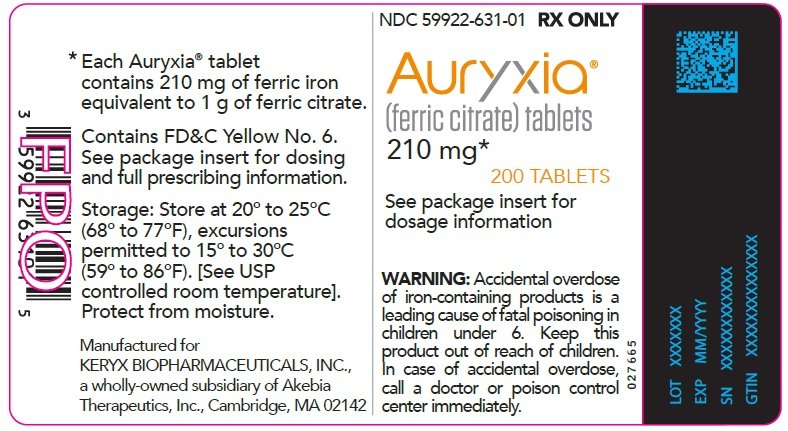