Each Akineton tablet for oral administration contains 2 mg biperiden hydrochloride. Other ingredients may include corn syrup, lactose, magnesium stearate, potato starch and talc. Akineton is an anticholinergic agent. Biperiden is α-5-Norbornen-2-yl-α-phenyl-1-piperidinepropanol. It is a white, crystalline, odorless powder, slightly soluble in water and alcohol. It is stable in air at normal temperatures. Biperiden may be represented by the following structural formula: 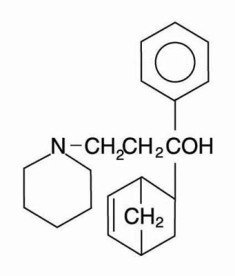 Akineton is a weak peripheral anticholinergic agent. It has, therefore, some antisecretory, antispasmodic and mydriatic effects. In addition, Akineton possesses nicotinolytic activity. Parkinsonism is thought to result from an imbalance between the excitatory (cholinergic) and inhibitory (dopaminergic) systems in the corpus striatum. The mechanism of action of centrally active anticholinergic drugs such as Akineton is considered to relate to competitive antagonism of acetylcholine at cholinergic receptors in the corpus striatum, which then restores the balance.

The parenteral form of Akineton is an effective and reliable agent for the treatment of acute episodes of extrapyramidal disturbances sometimes seen during treatment with neuroleptic agents. Akathisia, akinesia, dyskinetic tremors, rigor, oculogyric crisis, spasmodic torticollis, and profuse sweating are markedly reduced or eliminated. With parenteral Akineton, these drug-induced disturbances are rapidly brought under control. Subsequently, this can usually be maintained with oral doses which may be given with tranquilizer therapy in psychotic and other conditions requiring an uninterrupted therapeutic program.

Only limited pharmacokinetic studies of biperiden in humans are available. The serum concentration at 1 to 1.5 hours following a single, 4 mg oral dose was 4-5 ng/mL. Plasma levels (0.1-0.2 ng/mL) could be determined up to 48 hours after dosing. Six hours after an oral dose of 250 mg/kg in rats, 87% of the drug had been absorbed. The metabolism of Akineton is also incompletely understood, but does involve hydroxylation. In normal volunteers a single 10 mg intravenous dose of biperiden seemed to cause a transient rise in plasma cortisol and prolactin. No change in GH, LH, FSH, or TSH levels were seen. Biperiden lactate (10 mg/mL) was not irritating to the tissue of rabbits when injected intramuscularly (1.0 mL) into the sacrospinalis muscles and intradermally (0.25 mL) and subcutaneously (0.5 mL) into the shaved abdominal skin.

Indications and Usage for Akineton

Isolated instances of mental confusion, euphoria, agitation and disturbed behavior have been reported in susceptible patients. Also, the central anticholinergic syndrome can occur as an adverse reaction to properly prescribed anticholinergic medication, although it is more frequently due to overdosage. It may also result from concomitant administration of an anticholinergic agent and a drug that has secondary anticholinergic actions (see PRECAUTIONS - Drug Interactions and OVERDOSAGE sections). Caution should be observed in patients with manifest glaucoma, though no prohibitive rise in intraocular pressure has been noted following either oral or parenteral administration. Patients with prostatism, epilepsy or cardiac arrhythmia should be given this drug with caution.

Occasionally, drowsiness may occur, and patients who drive a car or operate any other potentially dangerous machinery should be warned of this possibility. As with other drugs action on the central nervous system, the consumption of alcohol should be avoided during Akineton therapy.

Atropine-like side effects such as dry mouth; blurred vision; drowsiness; euphoria or disorientation; urinary retention; postural hypotension; constipation; agitation; disturbed behavior may been seen. A case of generalized choreic movements has been reported in a Parkinson's disease patient when biperiden was added to carbidopa/levodopa. A reduction in rapid eye movement (REM) sleep, characterized by increased REM latency and decreased percentage of REM sleep, has been reported. There usually are no significant changes in blood pressure or heart rate in patients who have been given the parenteral form of Akineton. Mild transient postural hypotension and bradycardia may occur. These side effects can be minimized or avoided by slow intravenous administration. No local tissue reactions have been reported following intramuscular injection. If gastric irritation occurs following oral administration, it can be avoided by administering the drug during or after meals.

Treatment of acute overdose revolves around symptomatic and supportive therapy. If Akineton was administered orally, gastric lavage or other measures to limit absorption should be instituted. A small dose of diazepam or a short acting barbiturate may be administered if CNS excitation is observed. Phenothiazines are contraindicated because the toxicity may be intensified due to their antimuscarinic action, causing coma. Respiratory support, artificial respiration or vasopressor agents may be necessary. Hyperpyrexia must be reversed, fluid volume replaced and acid-base balance maintained. Urinary catheterization may be necessary.

Routine use of physostigmine for overdose is controversial. Delirium, hallucinations, coma, and supraventricular tachycardia (not ventricular tachycardias or conduction defects) seem to respond. If indicated, 1 mg (half this amount for the children or elderly) may be given intramuscularly or by slow intravenous infusion. If there is no response within 20 minutes, and additional 1 mg dose may be given; this may be repeated until a total of 4 mg has been administered, a reversal of the toxic effects occur or excessive cholinergic signs are seen. Frequent monitoring of clinical signs should be done. Since physostigmine is rapidly destroyed, additional injections may be required every one or two hours to maintain control. The relapse intervals tend to lengthen as the toxic anticholinergic agent is metabolized, so the patient should be carefully observed for 8 to 12 hours following the last relapse.

Oral: One tablet one to three times daily.

Parkinson's Disease: Oral: The usual beginning dose is one tablet three or four times daily. The dosage should be individualized with the dose titrated upward to a maximum of 8 tablets (16 mg) per 24 hours.

How is Akineton Supplied

Akineton (biperiden hydrochloride) Tablets, 2 mg each, white, embossed on one face with a triangle, bisected on the reverse and imprinted with the number "11."

Akineton is a registered trademark of Knoll AG.