Indications and Usage for Aggrastat

The recommended dosage is 25 mcg/kg administered intravenously within 5 minutes and then 0.15 mcg/kg/min for up to 18 hours.

For intravenous use only. Parenteral drug products should be inspected visually for particulate matter and discoloration prior to administration whenever solution and container permit.

To open the 100 mL or 250 mL premixed bag, first tear off its foil overpouch. The plastic may be somewhat opaque because of moisture absorption during sterilization; the opacity will diminish gradually. Check for leaks by squeezing the inner bag firmly; if any leaks are found or sterility is suspect then the solution should be discarded. Do not use unless the solution is clear and the seal is intact.

Drug Compatibilities
Aggrastat can be administered in the same intravenous line as heparin, atropine sulfate, dobutamine, dopamine, epinephrine hydrochloride (HCl), famotidine injection, furosemide, lidocaine, midazolam HCl, morphine sulfate, nitroglycerin, potassium chloride, and propranolol HCl. Do not administer Aggrastat through the same IV line as diazepam. Do not add other drugs or remove solution directly from the bag with a syringe.

The recommended dosage in patients with CrCl ≤60 mL/min (calculated using the Cockcroft-Gault equation with actual body weight) is 25 mcg/kg intravenously within 5 minutes and then 0.075 mcg/kg/min, for up to 18 hours.

Aggrastat is contraindicated in patients with:

Bleeding is the most common complication encountered during therapy with Aggrastat. Most bleeding associated with Aggrastat occurs at the arterial access site for cardiac catheterization. Minimize the use of traumatic or potentially traumatic procedures such as arterial and venous punctures, intramuscular injections, nasotracheal intubation, etc.

The incidences of major and minor bleeding using the TIMI criteria in the PRISM-PLUS study are shown below.

The incidence rates of TIMI major bleeding in patients undergoing percutaneous procedures in PRISM-PLUS are shown below.

The incidence rates of TIMI major bleeding in patients undergoing coronary artery bypass graft surgery (CABG) in PRISM-PLUS within one day of discontinuation of Aggrastat were 17% on Aggrastat plus heparin (N=29) and 35% on heparin alone (N=31).

Rates of major bleeds (including any intracranial, intraocular or retroperitoneal hemorrhage, clinically overt signs of hemorrhage associated with a drop in hemoglobin of >3 g/dL or any drop in hemoglobin by 4 g/dL, bleeding requiring transfusion of ≥ 2 U blood products, bleeding directly resulting in death within 7 days or hemodynamic compromise requiring intervention) were consistent with the rates observed in subjects administered the PRISM-PLUS regimen of Aggrastat. There was a trend toward greater bleeding in ST segment elevation myocardial infarction (STEMI) patients treated with fibrinolytics prior to administration of Aggrastat using the recommended regimen during rescue PCI.

The incidences of non-bleeding adverse events that occurred at an incidence of >1% and numerically higher than control, regardless of drug relationship, are shown below:

The following additional adverse reactions have been identified during post-approval use of Aggrastat. Because these reactions are reported voluntarily from a population of uncertain size, it is not always possible to reliably estimate their frequency or establish a causal relationship to the drug exposure.

Hypersensitivity: Severe allergic reactions including anaphylactic reactions have occurred during the first day of Aggrastat infusion, during initial treatment, and during readministration of Aggrastat. Some cases have been associated with severe thrombocytopenia (platelet counts <10,000/mm3). No information is available on the formation of antibodies to tirofiban.

Risk Summary
While published data cannot definitively establish the absence of risk, available published case reports have not established an association with tirofiban use during pregnancy and major birth defects, miscarriage, or adverse maternal or fetal outcomes. Untreated myocardial infarction can be fatal to the pregnant woman and fetus (see Clinical Considerations). Studies with tirofiban HCl at intravenous doses up to 5 mg/kg/day (about 5 and 13 times the maximum recommended daily human dose for rat and rabbit, respectively, when compared on a body surface area basis) have revealed no harm to the fetus.

Clinical Considerations
Disease-associated maternal and/or embryo/fetal risk
Myocardial infarction is a medical emergency in pregnancy which can be fatal to the pregnant woman and fetus if left untreated.

Data
Animal Data
There was no evidence of maternal or developmental toxicity in any of the studies in Table 5.

Risk Summary
There is no data on the presence of tirofiban in human milk, the effects of the drug on the breastfed infant, or the effects of the drug on human milk production. However, tirofiban is present in rat milk. The developmental and health benefits of breastfeeding should be considered along with the mother’s clinical need for Aggrastat and any potential adverse effects on the breastfed child from Aggrastat or from the underlying maternal condition.

Of the total number of patients in controlled clinical studies of Aggrastat, 43% were 65 years and over, while 12% were 75 years and over. With respect to efficacy, the effect of Aggrastat in the elderly (≥65 years) appeared similar to that seen in younger patients (<65 years). Elderly patients receiving Aggrastat with heparin or heparin alone had a higher incidence of bleeding complications than did younger patients, but the incremental risk of bleeding in patients treated with Aggrastat in combination with heparin compared to the risk in patients treated with heparin alone was similar regardless of age. No dose adjustment is recommended for the elderly population [see Dosage and Administration (2)].

Safety and efficacy of Aggrastat has not been established in patients on hemodialysis.

The most frequently reported manifestation of overdosage was bleeding, primarily minor mucocutaneous bleeding events and minor bleeding at the sites of cardiac catheterization [see Warnings and Precautions (5.1)].

Overdosage of Aggrastat should be treated by assessment of the patient’s clinical condition and cessation or adjustment of the drug infusion as appropriate.

Aggrastat can be removed by hemodialysis.

Its molecular formula is C22H36N2O5S•HCl•H2O and its structural formula is:

Tirofiban hydrochloride monohydrate is a white to off-white, non-hygroscopic, free-flowing powder, with a molecular weight of 495.08. It is very slightly soluble in water.

Aggrastat Injection Premixed is supplied as a sterile solution in water for injection, for intravenous use. The pH of the solution ranges from 5.5 to 6.5 adjusted with hydrochloric acid and/or sodium hydroxide.

Following discontinuation of an infusion of Aggrastat 0.10 mcg/kg/min, ex vivo platelet aggregation returns to near baseline in 4 to 8 hours in approximately 90% of patients with coronary artery disease. The addition of heparin to this regimen does not significantly alter the percentage of subjects with >70% inhibition of platelet aggregation (IPA), but does increase the average bleeding time, as well as the number of patients with bleeding times prolonged to >30 minutes. Similar platelet aggregation recovery rates are observed following discontinuation of a 0.15 mcg/kg/min infusion.

Tirofiban has a half-life of approximately 2 hours. It is cleared from the plasma largely by renal excretion, with about 65% of an administered dose appearing in urine and about 25% in feces, both largely as unchanged tirofiban. Metabolism appears to be limited.

Tirofiban is not highly bound to plasma proteins and protein binding is concentration independent over the range of 0.01 to 25 mcg/mL. The unbound fraction in human plasma is 35%. The steady state volume of distribution of tirofiban ranges from 22 to 42 liters.

There is no effect on clearance of tirofiban by sex, race, age, or hepatic impairment.

The carcinogenic potential of Aggrastat has not been evaluated.

Tirofiban HCl was negative in the in vitro microbial mutagenesis and V-79 mammalian cell mutagenesis assays. In addition, there was no evidence of direct genotoxicity in the in vitro alkaline elution and in vitro chromosomal aberration assays. There was no induction of chromosomal aberrations in bone marrow cells of male mice after the administration of intravenous doses up to 5 mg tirofiban/kg (about 3 times the maximum recommended daily human dose when compared on a body surface area basis).

Fertility and reproductive performance were not affected in studies with male and female rats given intravenous doses of tirofiban up to 5 mg/kg/day (about 5 times the maximum recommended daily human dose when compared on a body surface area basis).

Two large-scale clinical studies established the efficacy of Aggrastat in the treatment of patients with NSTE-ACS (unstable angina/non-ST elevation MI). The two studies examined Aggrastat alone and added to heparin, prior to and after percutaneous coronary revascularization (if indicated) (PRISM-PLUS) and in comparison to heparin in a similar population (PRISM). These trials are discussed in detail below.

In the double-blind PRISM-PLUS trial, 1570 patients with documented NSTE-ACS within 12 hours of entry into the study were randomized to Aggrastat (30 minute initial infusion of 0.4 mcg/kg/min followed by a maintenance infusion of 0.10 mcg/kg/min) in combination with heparin (bolus of 5,000 U followed by an infusion of 1,000 U/h titrated to maintain an activated partial thromboplastin time (APTT) of approximately 2 times control) or to heparin alone. All patients received concomitant aspirin unless contraindicated. Patients who were medically managed or who underwent revascularization procedures were studied. Patients underwent 48 hours of medical stabilization on study drug therapy, and they were to undergo angiography before 96 hours (and, if indicated, angioplasty/atherectomy, while continuing on Aggrastat and heparin for 12-24 hours after the procedure). Aggrastat and heparin could be continued for up to 108 hours. Exclusions included contraindications to anticoagulation, decompensated heart failure, platelet count <150,000/mm3, and serum creatinine >2.5 mg/dL. The mean age of the population was 63 years; 32% of patients were female and approximately half of the population presented with non-ST elevation myocardial infarction. On average, patients received Aggrastat for 71 hours.

A third group of patients was initially randomized to Aggrastat alone (no heparin). This arm was stopped when the group was found, at an interim look, to have greater mortality than the other two groups.

The benefit seen at 7 days was maintained over time. The risk reduction in the composite endpoint at 30 days and 6 months is shown in the Kaplan-Meier curve below. 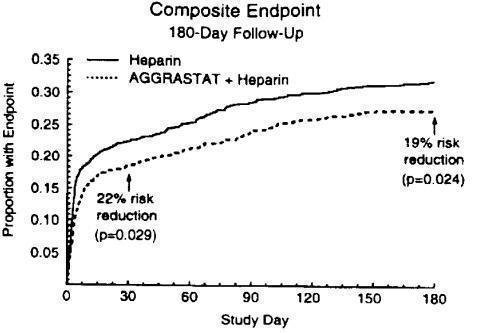 An analysis of the results by sex suggests that women who are medically managed or who undergo subsequent percutaneous transluminal coronary angioplasty (PTCA)/atherectomy may receive less benefit from Aggrastat (95% confidence limits for relative risk of 0.61-1.74) than do men (0.43-0.89) (p=0.11). This difference may be a true treatment difference, the effect of other differences in these subgroups, or a chance occurrence.

Approximately 90% of patients in the PRISM-PLUS study underwent coronary angiography and 30% underwent angioplasty/atherectomy during the first 30 days of the study. The majority of these patients continued on study drug throughout these procedures. Aggrastat was continued for 12-24 hours (average 15 hours) after angioplasty/atherectomy. The effects of Aggrastat at Day 30 did not appear to differ among sub-populations that did or did not receive PTCA or CABG, both prior to and after the procedure.

In the PRISM study, a randomized, parallel, double-blind study, 3232 patients with NSTE-ACS intended to be managed without coronary intervention were randomized to Aggrastat (initial dose of 0.6 mcg/kg/min for 30 minutes followed by 0.15 mcg/kg/min for 47.5 hours) or heparin (5000-unit intravenous bolus followed by an infusion of 1000 U/h for 48 hours). The mean age of the population was 62 years; 32% of the population was female and 25% had non-ST elevation MI on presentation. Thirty percent had no ECG evidence of cardiac ischemia. Exclusion criteria were similar to PRISM-PLUS. The primary endpoint was the composite endpoint of refractory ischemia, MI or death at the end of the 48-hour drug infusion. The results are shown in Table 7.

In the PRISM study, no adverse effect of Aggrastat on mortality at either 7 or 30 days was detected. This result is different from that in the PRISM-PLUS study, where the arm that included Aggrastat without heparin (N=345) was dropped at an interim analysis by the Data Safety Monitoring Committee for increased mortality at 7 days.

Advise patients to watch closely for any signs of bleeding or bruising and to report these to their health care provider when they occur.

Advise patients to discuss with their health care provider their use of any other medications, including over-the-counter or herbal products prior to Aggrastat use.

Aggrastat is manufactured for: 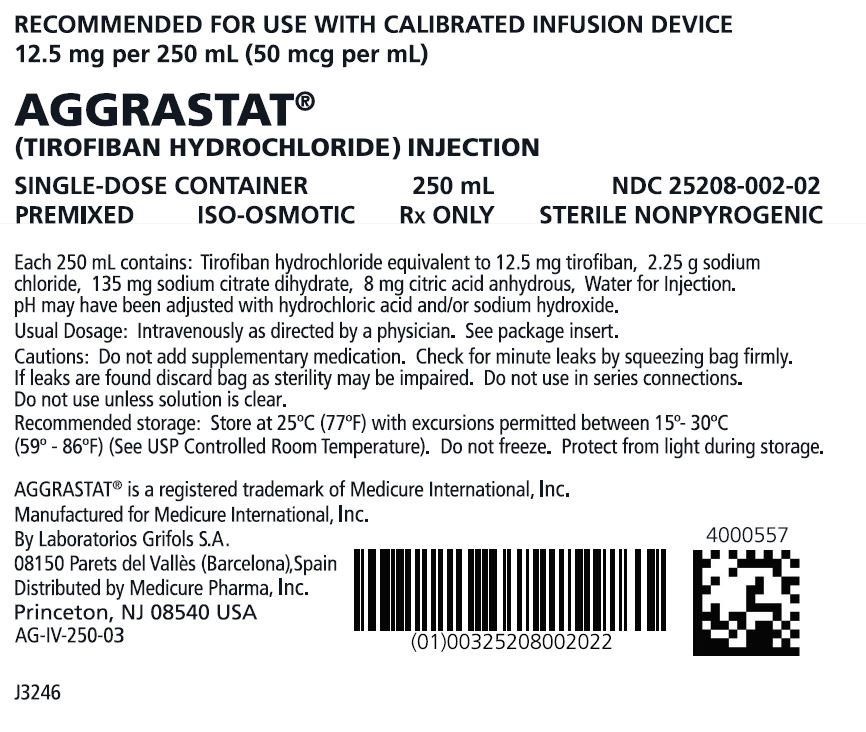 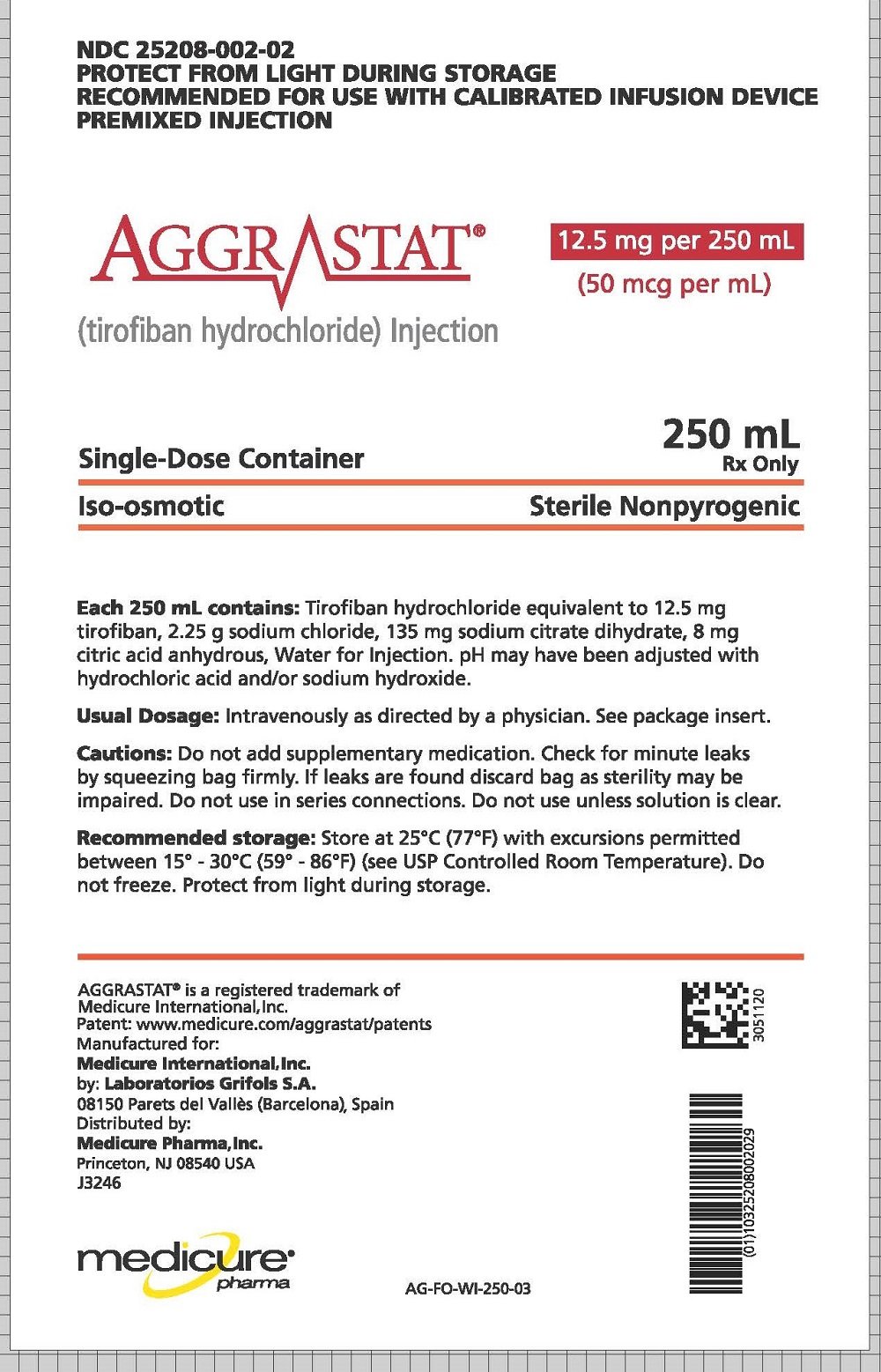 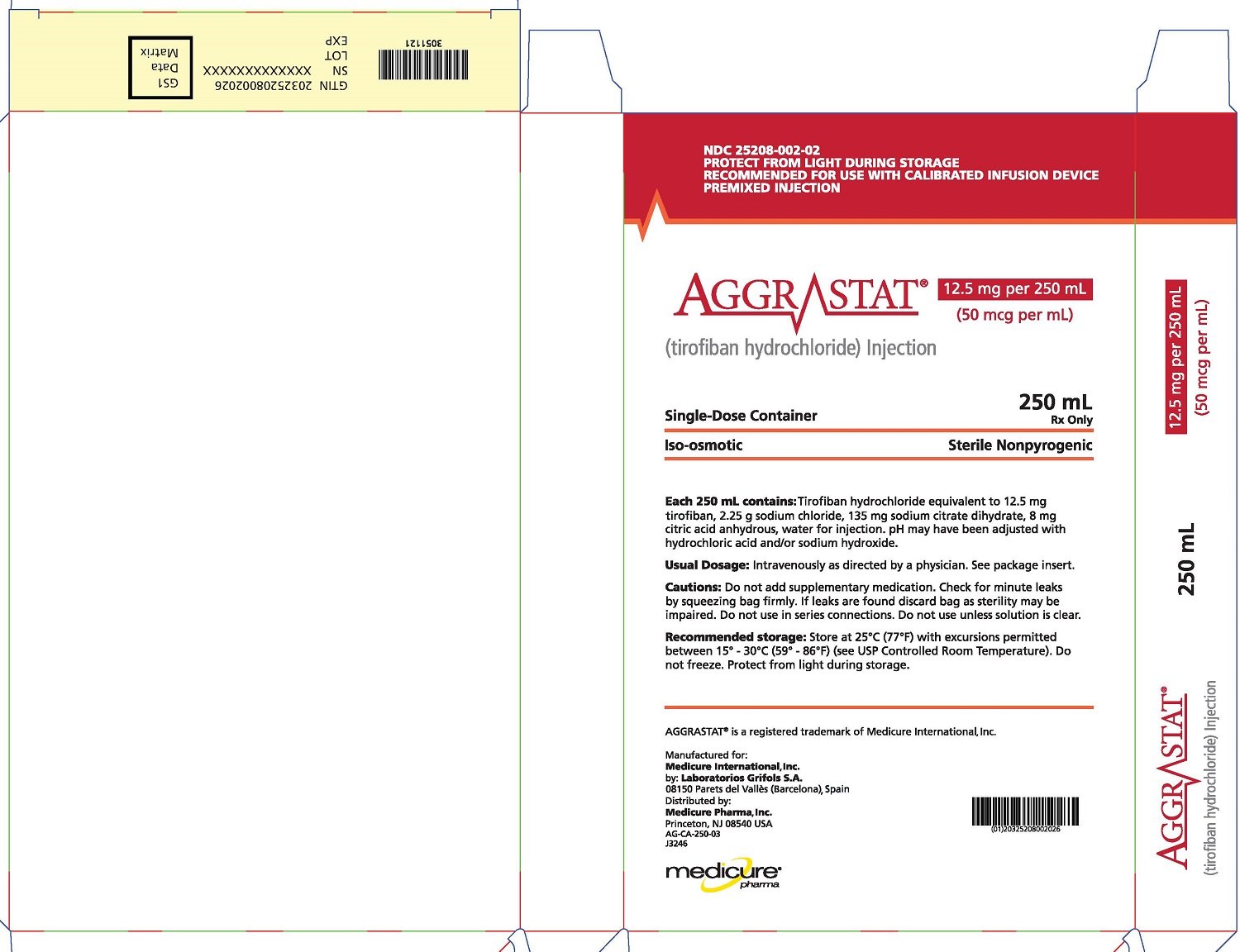 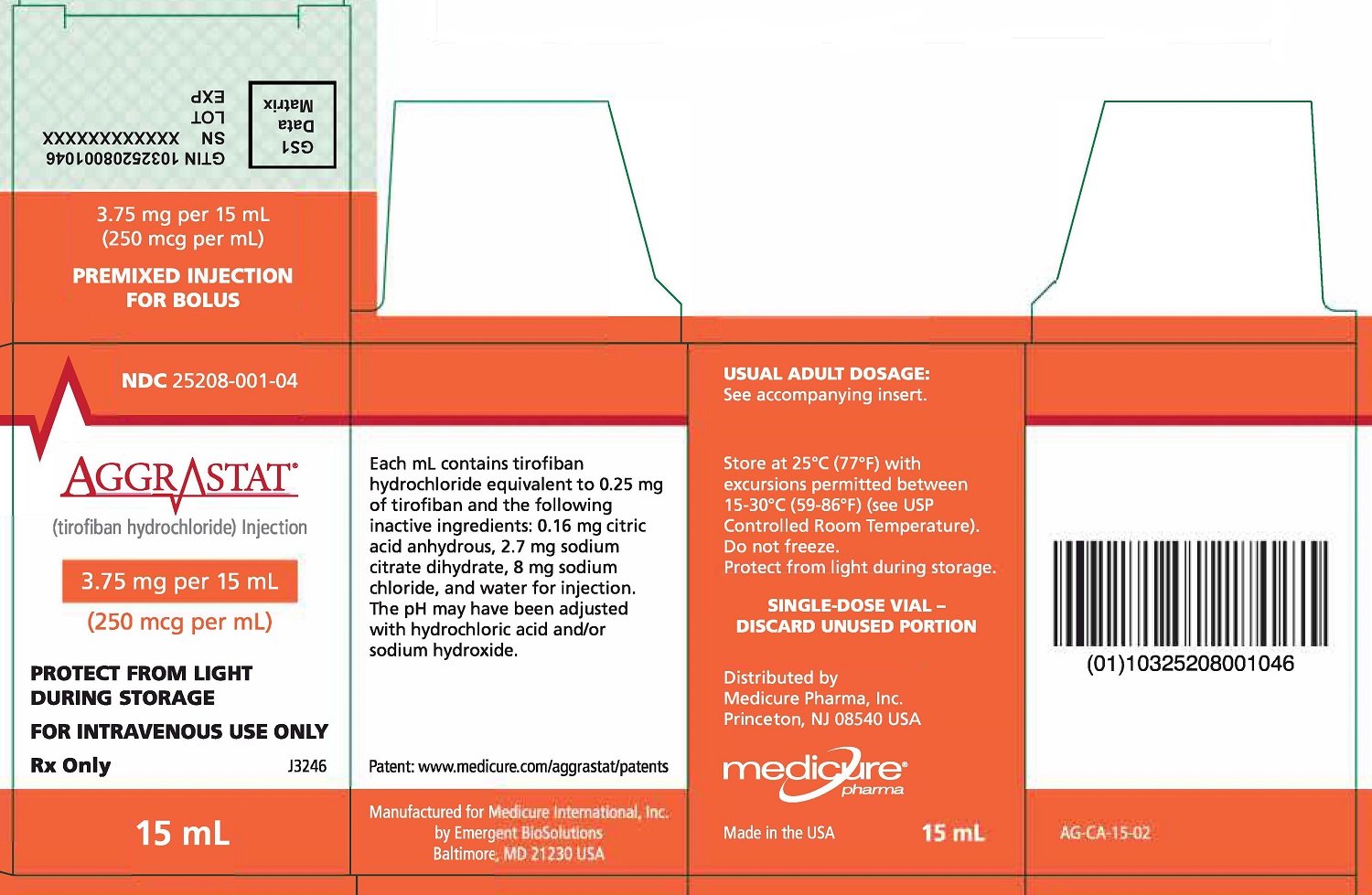 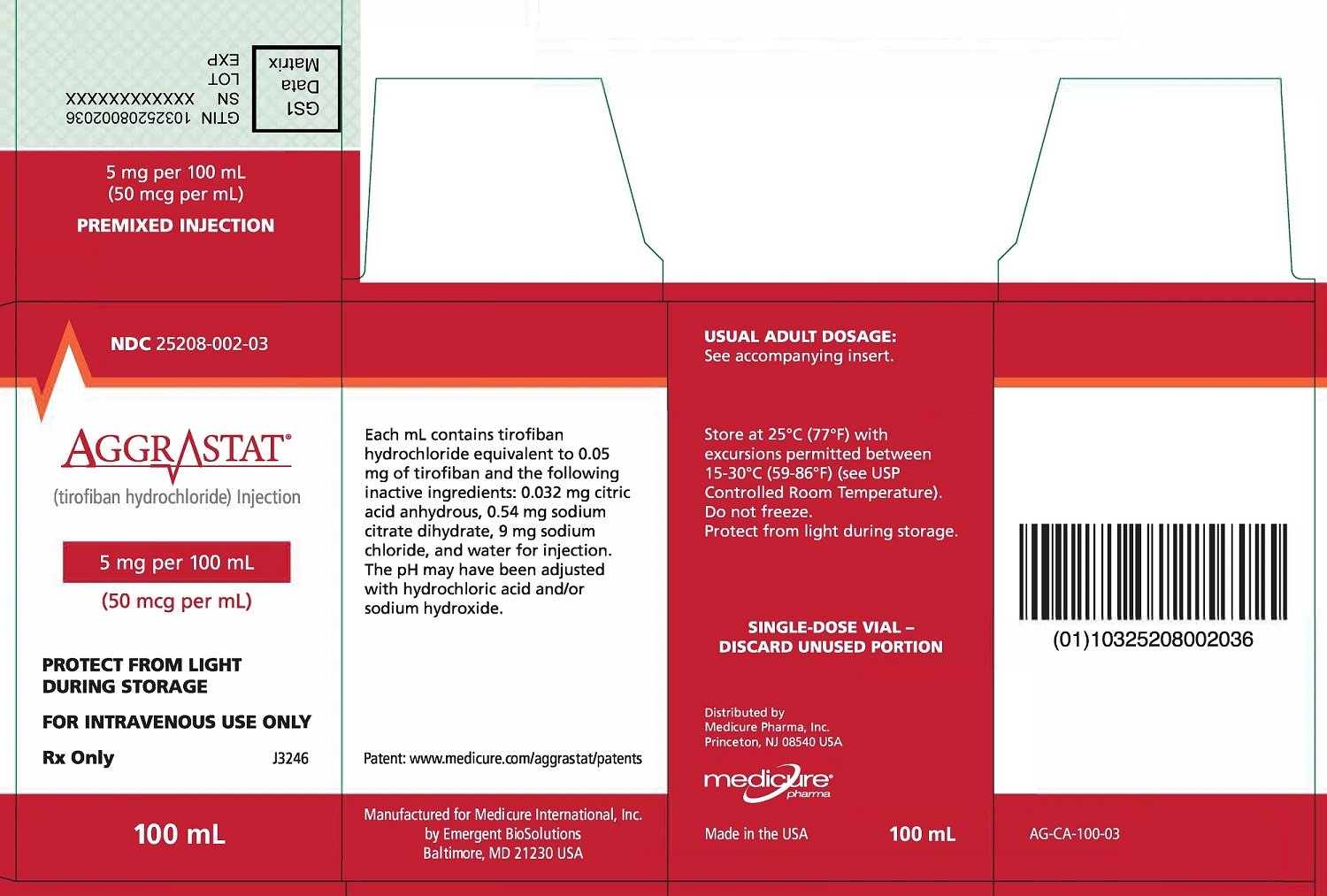 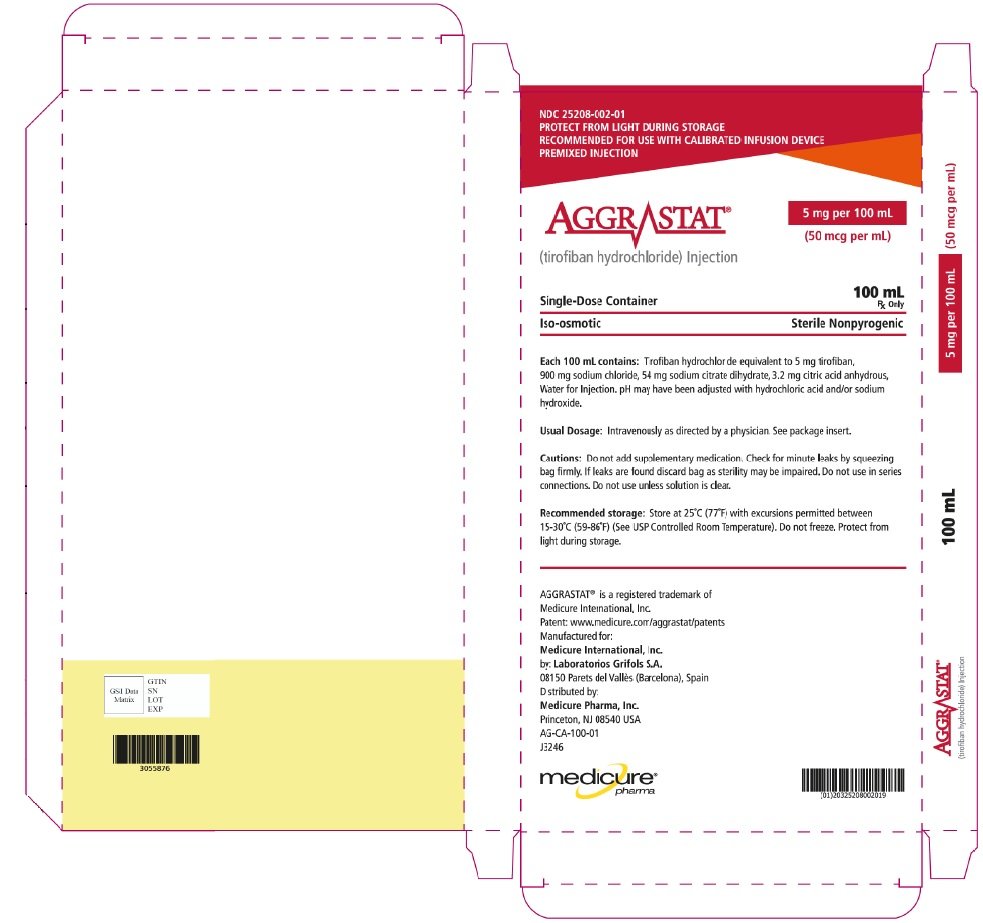 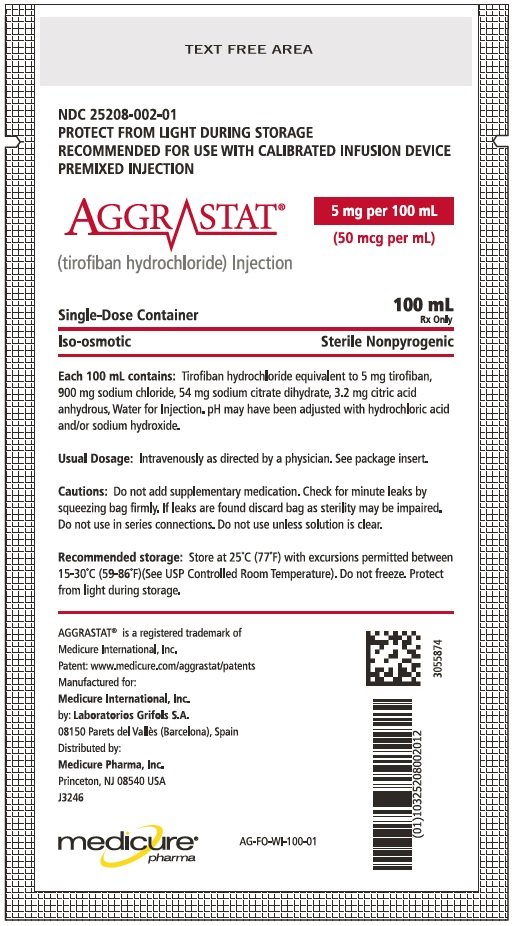 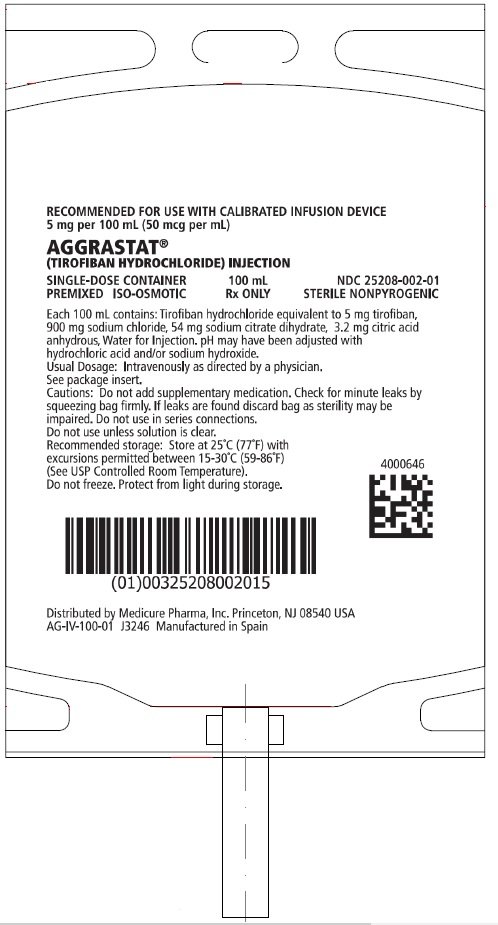