May be used as monotherapy or as adjunctive therapy to levodopa or other antiparkinsonian agents (e.g., dopamine agonists).

Available as rasagiline mesylate; dosage expressed in terms of rasagiline.

Monotherapy or Adjunctive Therapy with Other Antiparkinsonian Agents (Other than Levodopa)

If adequate response not achieved, may increase dosage to 1 mg once daily as tolerated.

0.5 mg once daily in patients with mild (Child-Pugh score of 5–6) hepatic impairment.

Use not recommended in patients with moderate or severe (Child-Pugh score ≥7) hepatic impairment. (See Special Populations under Pharmacokinetics.)

No dosage adjustment required in patients with mild or moderate renal impairment.

Hypertensive crisis reported rarely following concomitant use of recommended dosages of selective MAO-B inhibitors with tyramine-rich foods or sympathomimetic amines (e.g., ephedrine). Manufacturer states that restriction of most tyramine-containing foods generally not required during rasagiline therapy. However, because foods that contain very large amounts (i.e., >150 mg) of tyramine potentially can cause severe hypertension in some patients (e.g., those with mildly increased sensitivity to tyramine) receiving recommended dosages of rasagiline, advise patients to avoid such tyramine-rich foods during rasagiline therapy. (See Specific Drugs and Foods under Interactions and also see Advice to Patients.)

Concomitant use with certain opiate agonists (i.e., meperidine, methadone, propoxyphene [no longer commercially available in the US], tramadol) is contraindicated. Concomitant use with antidepressants generally should be avoided. (See Specific Drugs and Foods under Interactions.)

Some patients perceived no warning signs (e.g., excessive drowsiness) and believed that they were alert immediately prior to the event.

Generally discontinue therapy if a patient develops daytime sleepiness or episodes of falling asleep during activities that require active participation (e.g., conversations, eating). If the drug is continued, advise patients not to drive and to avoid other potentially dangerous activities.

Concomitant Use with Ciprofloxacin or Other CYP1A2 Inhibitors

Concomitant use with ciprofloxacin or other CYP1A2 inhibitors may increase plasma rasagiline concentrations by up to twofold. Adjustment of rasagiline dosage recommended. (See Drugs Affecting Hepatic Microsomal Enzymes under Interactions.)

Orthostatic Hypotension and Lowering of BP

Orthostatic hypotension, with or without manifestations such as dizziness, nausea, syncope, and sometimes sweating, reported when used as adjunctive therapy with levodopa. Occurs most frequently during the first 2 months of therapy (and less frequently over time) and may occur at any time following dosage increase. Substantial decreases in BP in the supine position and posttreatment hypotension also reported following use as adjunctive therapy.

When used as adjunctive therapy with levodopa, rasagiline may precipitate or exacerbate levodopa-associated adverse effects (e.g., dyskinesia), presumably by increasing dopaminergic activity; effects may be mitigated by reducing levodopa dosage.

Hallucinations reported when used as monotherapy or as adjunctive therapy with levodopa. (See Advice to Patients.)

Intense urges (e.g., urge to gamble, increased sexual urges, other intense urges) and inability to control these urges reported in some patients receiving antiparkinsonian agents that increase central dopaminergic tone (including rasagiline). Urges stopped in some cases when dosage was reduced or drug was discontinued.

Consider reducing dosage or discontinuing rasagiline if a patient develops such urges.

Epidemiologic studies indicate patients with Parkinson disease have a twofold to approximately sixfold greater risk of developing melanoma than the general population. Unclear whether increased risk is related to Parkinson disease or other factors (e.g., drugs used to treat the disease).

Inhibits prolactin secretion in rats; may inhibit milk secretion in women. Not known whether rasagiline is distributed into milk; caution if used in nursing women.

Safety and efficacy not established in pediatric patients <18 years of age.

No overall differences in safety relative to younger adults.

Use not recommended in patients with moderate or severe (Child-Pugh score ≥7) hepatic impairment. (See Special Populations under Pharmacokinetics.)

Absolute bioavailability is about 36%.

High-fat meals decrease peak plasma concentrations and AUC of rasagiline by approximately 60 and 20%, respectively. Because of modest effect on AUC, may administer rasagiline without regard to meals.

Undergoes almost complete biotransformation in the liver prior to excretion. Metabolized via dealkylation and/or hydroxylation by CYP isoenzymes, principally CYP1A2.

Mean steady-state or terminal half-life is 3 or 1.34 hours, respectively. However, no correlation between pharmacokinetic profile and pharmacologic effects because rasagiline irreversibly inhibits MAO-B, and restoration of normal enzyme activity depends on the rate of de novo enzyme synthesis. 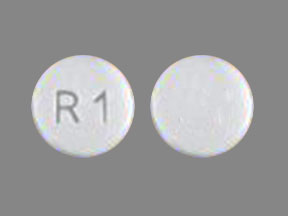