Antineoplastic agent; a nonsteroidal antiandrogen structurally and pharmacologically related to bicalutamide and flutamide.

300 mg once daily for 30 days, followed by 150 mg given once daily thereafter. For maximum benefit, initiate nilutamide on the day of or the day after orchiectomy.

Duration of therapy depends on the duration of clinical response of the patient.

Obtain a chest radiograph prior to the initiation of therapy. Baseline pulmonary function tests also may be considered.

Safety and efficacy not established in women.

Not intended for use in women, particularly for nonserious or non-life-threatening conditions.

Isolated cases of aplastic anemia reported, but a causal relationship with nilutamide not established.

Possible difficulty in visual adaptation to changes in light level; delays, ranging from seconds to a few minutes, in adapting to changes from light to dark reported. Such effect may not diminish during continued therapy with the drug. To minimize this effect, advise patients to wear tinted glasses during exposure to bright light.

Category C. (See Use in Women under Cautions.)

Inhibits the activity of CYP isoenzymes; may reduce the metabolism of drugs metabolized by these systems.

Extensively metabolized in the liver and lungs by CYP isoenzymes to mainly inactive metabolites. 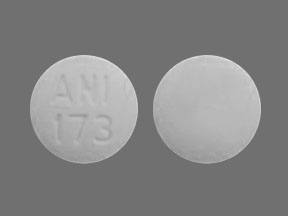