Used as an adjunct to psychological, educational, social, and other remedial measures in the treatment of attention deficit hyperactivity disorder (ADHD) (hyperkinetic disorder, hyperkinetic syndrome of childhood, minimal brain dysfunction).

Drug therapy is not indicated in all patients with ADHD, and such therapy should be considered only after a complete evaluation, including medical history, has been performed.

Use should depend on age and the clinician’s assessment of the severity and duration of symptoms and should not depend solely on one or more behavioral characteristics.

Not recommended for ADHD symptoms associated with acute stress reactions.

Has been used as an adjunct to caloric restriction in the short-term (i.e., a few weeks) treatment of exogenous obesity. However, because of limited efficacy (short-lived), such use no longer is recommended.

The anorexigenic effect appears to be temporary, seldom lasting more than a few weeks, and tolerance may occur.

Obesity usually is a chronic disease, and short-term or intermittent therapy with anorexigenic drugs is unlikely to maintain long-term benefit.

Misuse and abuse have experienced a resurgence, in large part, due to the relative ease with which methamphetamine can be synthesized clandestinely from readily available chemicals such as ephedrine, phenylpropanolamine (no longer commercially available in the US), or pseudoephedrine. Recent restrictions (including enactment of the Comprehensive Methamphetamine Control Act of 1996, the Methamphetamine Anti-Proliferation Act [MAPA] of 2000, and the Combat Methamphetamine Epidemic Act [CMEA] of 2005) on the availability of these compounds are hoped to reverse this resurgence in misuse and abuse.

When used as an anorexigenic agent, administer 30 minutes before each meal.

Because of potential for insomnia, avoid administering doses in the late evening.

Available as methamphetamine hydrochloride; dosage expressed in terms of the salt.

Adjust dosage according to individual response and tolerance; the smallest dose required to produce the desired response should always be used.

When possible, therapy should be interrupted occasionally to determine if there is a recurrence of behavioral symptoms sufficient to require continued treatment.

If tolerance to anorectic effect occurs, manufacturer suggests not to exceed recommended dosage (in an attempt to increase effect), but rather to discontinue therapy.

Children ≥12 years of age: 5 mg given 30 minutes before each meal recommended by manufacturer. Treatment should not exceed a few weeks.

Children ≥6 years of age: Initially, 5 mg once or twice daily; daily dosage is increased in 5-mg increments at weekly intervals until the optimum response is attained.

5 mg given 30 minutes before each meal recommended by manufacturer. Treatment should not exceed a few weeks.

Children ≥12 years of age: Treatment should not exceed a few weeks.

Treatment should not exceed a few weeks.

Select dosage with caution, usually starting at the low end of the dosage range, because of age-related decreases in hepatic, renal, or cardiac function, and of concomitant disease or other drug therapy.

Sudden unexplained death, stroke, or MI reported in patients with or without structural cardiac abnormalities or other serious cardiac conditions receiving usual dosages of stimulants.

Epidemiologic data suggest a possible association between use of stimulants and sudden unexplained death in healthy children and adolescents. FDA unable to conclude that these data affect evaluation of overall risk and benefit of stimulants used to treat ADHD in children and adolescents. FDA is conducting an ongoing safety review of amphetamines and other stimulants to evaluate possible link between use of these agents and sudden death in children. Pediatric patients with ADHD and their parents should avoid discontinuing the child’s use of such stimulants before consulting a clinician.

Effects on BP and Heart Rate

Exacerbation or Precipitation of Psychotic Symptoms

May exacerbate symptoms of behavior disturbance and thought disorder in patients with preexisting psychotic disorder.

Psychotic symptoms (e.g., hallucinations, delusional thinking) may occur with usual dosages in children and adolescents without prior history of psychotic illness. If psychotic symptoms occur, consider causal relationship to stimulants, and discontinue therapy as appropriate.

Manic symptoms may occur with usual dosages in children and adolescents without prior history of mania. If manic symptoms occur, consider causal relationship to stimulants, and discontinue therapy as appropriate.

Aggressive behavior and hostility (frequently observed in children and adolescents with ADHD) reported in patients receiving drug therapy for ADHD. No systematic evidence that stimulants cause these adverse effects; however, monitor patients beginning treatment for ADHD for onset or worsening of aggressive behavior or hostility.

Long-term (i.e., >14 months) administration expected to cause at least a temporary suppression of normal weight and/or height patterns in some children and adolescents.

Manufacturer recommends monitoring growth during treatment; patients not growing or gaining weight as expected may require temporary discontinuance of treatment. However, AAP states that studies of stimulants in children found little or no decrease in expected height, with any decrease in growth early in treatment being compensated for later on.

Least amount of methamphetamine feasible should be prescribed or dispensed at one time in order to minimize possible overdosage.

Do not use to combat fatigue/exhaustion or to replace rest/sleep in normal persons.

Use with caution, if at all, in patients with hyperexcitability states or in those receiving drugs that may produce this effect. Also use with caution in asthenic patients or in those with psychopathic personalities or history of suicidal or homicidal tendencies.

Teratogenicity and embryolethality demonstrated in animals receiving high multiples of the human dose.

Amphetamines are distributed into milk. Discontinue nursing or the drug.

Not recommended for treatment of ADHD in pediatric patients <6 years of age.

Not recommended for management of exogenous obesity in pediatric patients <12 years of age.

Long-term administration expected to cause at least a temporary suppression of normal weight and/or height patterns in some children and adolescents. (See Growth Suppression under Cautions.)

Insufficient experience in patients ≥65 years of age to determine whether geriatric patients respond differently than younger adults. Other clinical experience has not identified differences in responses between geriatric and younger patients.

Use with caution in geriatric or debilitated patients. Select dosage with caution. (See Geriatric Patients under Dosage and Administration.)

Readily and rapidly absorbed from the GI tract.

Therapeutic effects persist for 6–12 hours; effects may continue up to 24 hours following administration of large doses.

Amphetamines apparently cross the placenta since withdrawal manifestations have occurred in neonates. (See Pregnancy under Cautions.)

Amphetamines are distributed into milk.

Metabolized in the liver by aromatic hydroxylation, N-dealkylation, and deamination.

Excreted principally in urine. With normal urinary pH, approximately 62% of the dose is excreted in urine within the first 24 hours as unchanged drug (about 1/3) and metabolites (about 2/3).

Excretion is enhanced in acidic urine.

Subject to control under the Federal Controlled Substances Act of 1970 as a schedule II (C-II) drug. 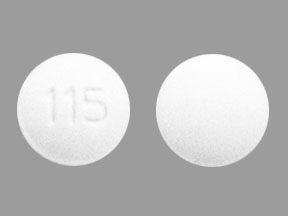