FDA approved a REMS for dofetilide to ensure that the benefits outweigh the risks. However, FDA later rescinded REMS requirements. See https://www.accessdata.fda.gov/scripts/cder/rems/.

Administer orally twice daily without regard to meals.

Within 2–3 hours after administration of the first dose, determine the QTc interval. If QTc interval has increased by >15% or >500 msec (550 msec in patients with ventricular conduction abnormalities), adjust subsequent dosages as follows:

For subsequent monitoring of the QT interval, see QT Interval Determination under Dosage and Administration.

Therapy may be initiated at lower dosages due to the risk of torsades de pointes.

Dosages >500 mcg twice daily have been associated with an increased incidence of torsades de pointes. (See Arrhythmogenic Effects under Cautions.)

Modify dosage according to the degree of renal impairment. (See Table 1.) For calculation of the patient’s Clcr, see Renal Function Assessment under Dosage and Administration.

Not studied in those undergoing dialysis; dosage recommendations are not known.

Select dosage with caution because of age-related decreases in renal function. (See Table 1.)

Reduce risk of torsades de pointes by controlling the plasma concentration (e.g., adjustment of initial dofetilide dosage according to Clcr, avoiding certain drug interactions) and monitoring the ECG for excessive increases in the QT interval.

Limited evidence suggests a possible excess mortality as a result of dofetilide use.

Not known whether dofetilide is distributed into milk. Use not recommended.

No substantial differences in safety and efficacy relative to younger adults. Select dosage with caution because of age-related decreases in renal function.

If clearance is decreased, dosage adjustments are necessary depending on degree of renal impairment. Safety and efficacy not established in patients with Clcr <20 mL/minute. (See Table 1 under Dosage and Administration for dosage adjustment based on Clcr.)

Not studied in patients with severe hepatic impairment; use with particular caution in these patients. (See Hepatic Impairment under Dosage and Administration.)

Metabolized by CYP3A4, but has a low affinity for this isoenzyme. Does not inhibit CYP isoenzymes.

Carefully screen patient’s medication history, including all OTC, prescription, and herbal/natural preparations with emphasis on those that may affect dofetilide pharmacokinetics. If discontinuance of dofetilide is necessary to permit administration of potentially interacting drug(s), allow a washout period of at least 2 days.

Use concurrent therapy with care.

Food delays absorption but does not affect total bioavailability.

Apparent volume of distribution is 3 L/kg. In animal studies, in utero growth and survival is affected adversely. Not known whether dofetilide is distributed into human milk.

Metabolized by CYP3A4, but the drug has a low affinity for this isoenzyme.

Distribution of dofetilide is restricted. (See Restricted Distribution Program under Dosage and Administration.) 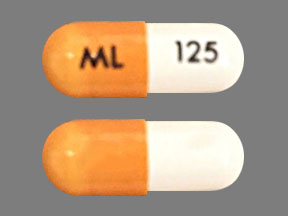