This page contains information on Witness Relaxin for veterinary use.
The information provided typically includes the following:

WITNESS® RELAXIN is intended to determine pregnancy in the bitch and queen, as well as to distinguish between pseudopregnancy and real gestation in the bitch. The test measures Relaxin levels in plasma and serum samples. The presence of significant amounts of this hormone is a reliable indicator of pregnancy.

The WITNESS® RELAXIN test provides an early, inexpensive and reliable way to determine success or failure of a planned mating or unwanted exposure.

Canine: Relaxin can be detected in biological samples soon after implantation of the fertilized egg, which occurs about 18 days after LH surge. Relaxin is first detectable by WITNESS® RELAXIN during the fourth week of pregnancy (from D22 to D28 after ovulation), reaches its highest level in the 6th-8th weeks, and then declines prior to parturition.

Feline: Some pregnancies may be detected as early as 25 days post-mating, while others may not test positive until after 31 days. It is recommended to test after this date if a previous result was negative.

WITNESS® RELAXIN is a simple test based on Rapid Immuno Migration (RIM™) technology that uses the combination of two anti-Relaxin antibodies to quickly identify this hormone in biological samples (serum or plasma) from the bitch and queen.

Colloidal gold particles sensitized with an anti-Relaxin antibody bind to Relaxin molecules present in the sample.

The formed complex migrates along a membrane. The complex is then captured on a sensitized reaction line (second antibody) where its accumulation causes the formation of a clearly visible pink/red band.

A pink/red band in the control window (3) ensures that the test was performed correctly.

● The test can be performed on serum or plasma (anticoagulated with EDTA, sodium citrate or heparin).

● Always collect samples with a sterile needle and syringe.

● Hemolysis does not significantly interfere with the test, but strongly hemolyzed samples may partly obscure a weak positive band.

● Do not use this kit or any of its components after the expiration date.

● Use the test immediately after the pouch is first opened (within 10 minutes).

● Avoid touching or damaging the membrane in the sample well or the results windows.

● The WITNESS® device should be placed on a flat, horizontal surface while performing the test.

● Use a separate pipette for each sample.

● Handle all samples as biohazardous material.

● For veterinary use only.

Prior to use, test and control bands appear yellow. The bands are dyed yellow for quality control purposes. The dye does not interfere with the test results and will wash away while the test is developing.

● Tear open a pouch provided and place the test device on a flat horizontal surface.

(Do not use whole blood). 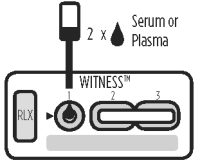 ● Check that the sample has fully absorbed into the membrane.

● Remove the cap from the buffer bottle, hold it vertically and add two drops of buffer to the test well.

● Leave the test device flat during migration of sample/reagent complex through the results window. 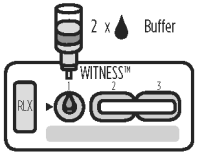 After 10 minutes, observe the presence or absence of pink/red bands in the results windows (2) and (3). 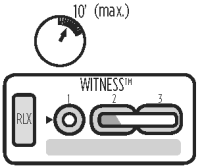 ● It is possible to read the test before 10 minutes if two pink/red bands are clearly visible in the results windows (2) and (3).

● The presence of only one band in control window (3), prior to the end of the development time (10 minutes) does not mean that the test is complete, as a test band may appear more slowly than the control band.

Test is valid if a pink/red band is present in reading window (3).

● Positive: One band in reading window (2), with one band in window (3): sample is positive for Relaxin.

● Negative: No band in reading window (2), with one band in window (3): sample is negative for Relaxin. 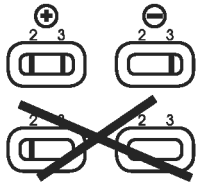 Negative Samples: A negative result means that Relaxin is not present in the sample (no pregnancy) or that its level is too low to be detected (too early to confirm a pregnancy status). Two negative results at least one week apart may be required for confirmation of non-pregnancy, especially when date of ovulation (or mating) is unknown. Non-pregnancy can be certainly confirmed only starting from day 27 after bitch’s ovulation (31 days post-mating in queens).